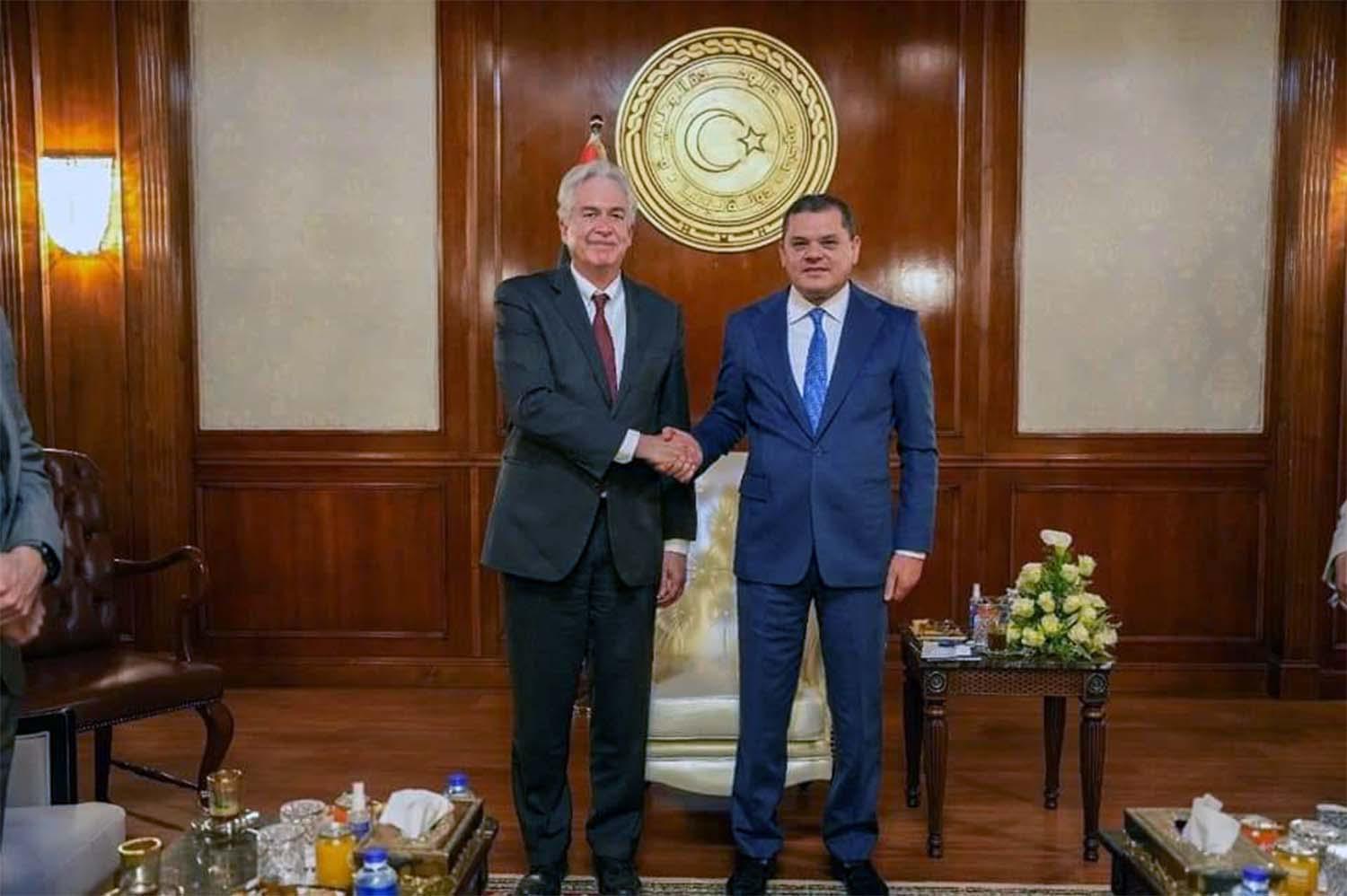 William Burns, CIA director, arrived in Libya on January 12 and met with Libyan Prime Minister Abdul Hamid Dbeibe in Tripoli, and others.  The meeting marked the highest-ranked US official to visit Libya since President Joe Biden took office.

Dbeibe’s government began in February 2021 and was tasked with holding elections under the auspices of the UN-appointed Libyan Political Dialogue Forum (LDPF). However, he failed to stabilize the country and organize national elections.

On January 13, special envoys from the US, France, Germany, Italy, and the UK met in Washington, DC. at the invitation of the US envoy to Libya, Richard Norland.  The western diplomats discussed setting an election deadline, staging the elections, and coercing the Libyans into agreeing with the western plans.

“We may have to stop hoping we can persuade these people to agree to elections and instead find a way to work around them,” said one diplomat.

The murder of Moammar Gaddafi in 2011 and the US-NATO attack on Libya for regime change divided the country, and left Libya destroyed and unable to recover either politically, socially, or economically.

Mass Demonstrations in Libya Demand an End to the Transitional Phase, the Overthrow of the Corrupt Political Class

“Libya again finds itself with two governments, neither of which has been elected or chosen by Libyans, but both of which are the product of continuous misdirection by corrupt politicians unwilling to let go of their positions of power,” said Libyan activist Asma Khalifa.

Will the Libyan Military Triumph Over the Obstacles of Politicians?

UN-sponsored agreements have established a lasting ceasefire, but have failed at resolving the political stalemate, in a situation comparable to Syria which also suffers from UN and western meddling, and the Muslim Brotherhood.

The two sides made some progress, but failed to set an election date or deadline, and failed to resolve issues that would affect the candidacies of Dbeibe and General Haftar.

US, UK and UNSMIL’s Dirty Game in Libya

The head of the Tripoli-based High Council of State (HCS), Khalid al-Mishri, was elected for his fifth term in August 2022.  Al-Mishri is linked to the Muslim Brotherhood, which is linked with both Qatar and Turkey, who both support the Islamist leaders in the UN-backed Tripoli administration.

Al-Mishri recently met with a rival, President of the House of Representatives (HoR) Aqila Saleh to discuss ways to reach an agreement to hold elections.

The CIA was on the ground in Libya before President Obama signed an order in mid-March 2011 authorizing the secret US support of armed anti-Gaddafi militias.  According to former CIA agent Bob Baer, the CIA was in Libya assessing who could be turned into a military unit against Gaddafi.

What the CIA found as partners in Libya in 2011 were Radical Islamic terrorists, such as Mehdi al-Harati.  Fierce fighters who were Al Qaeda followers and some would later morph into ISIS.

Ileana Ros-Lehtinen, the Republican chairwoman of the House of Representatives Foreign Affairs Committee in 2011, said: “My constituents are asking me: Just who are we helping and are we sure they are true allies who won’t turn and work against us?”

“The decision to engage the Muslim Brotherhood marked a historic change in American foreign policy, created a new paradigm in the Middle East, and set into motion a series of events that had catastrophic results: the Muslim Brotherhood’s resurgence, the overthrow of at least two governments, Al-Qaeda in Iraq’s transformation into the ISIS [the Islamic State group] caliphate, failed governments in Syria and Iraq, millions of refugees and displaced individuals, and the resulting destabilizing migration flows,” Rossomando wrote.

In an article in the New York Times in July 2021, Saif made it clear he wanted to lead Libya.  He enjoys support from officials, clans, and communities who had supported his late father, but the question of Saif’s role in the 2011 revolution hangs over his candidacy.

The head of the Supreme Council of Tribes and Cities in the southwest region of the country, Sheikh Ali Mesbah Abu Sbeiha, stated that Saif could stand as a candidate.

In November 2022, the Prosecutor of the International Criminal Court, Karim Khan, called on Libyan authorities to hand over Saif, and days later the US echoed the demand. However, Saif remains elusive due to his security concerns.

The Libyan ruling elite is corrupt

The Libyan political elite has failed to agree on holding the elections, while they continue robbing the public coffers for their benefit. The situation reminds us of Lebanon, where social services, security, and basic needs have deteriorated to the point of leaving the people hopeless.

Stephanie Williams, a former UN Special Envoy for Libya, explained “A transactional ruling class, part of whose network can be traced back to the days of the old regime, uses Libya’s state and sovereign institutions as cash cows in what might be described as a ‘redistributive kleptocracy’, regularly bringing enough of their compatriots into their circles to sustain the system.“

US and EU Manipulate Libya’s Leadership Through Stephanie Williams

“Divisions within the international community, political maneuvering by Libyan actors, and a lack of urgency linked to the low intensity of the conflict contribute to the current stalemate,” said Riccardo Fabiani, North Africa project director at the International Crisis Group.  He added, “There is little pressure on Libyan officials to get their act together and finally agree to hold elections and, unfortunately, for the time being, it looks like the crisis will continue as it is”.

According to Haftar, “The people must rely on their national strength to deal with corruption and build our state according to free will. The Libyan National Army, for its part, “has remained steadfast despite all the pressure and political attempts to subjugate it,” Haftar said and explained that the LNA “has no other supreme leader other than the one directly elected by the people”.

The CIA arrived in Libya in 2011, and CIA director Burns has just left Libya.  Can the Vice President under Obama, now President Biden, and his CIA director manipulate the political situation in Libya once again?  The words of the Republican congresswoman in 2011 come back to haunt us.  It appears Washington is still supporting the Muslim Brotherhood in the Middle East.  Perhaps it is time Republican Senator Ted Cruz of Texas were to re-float his bill to designate the Muslim Brotherhood as a terrorist organization.

Libya: Confusion Over the Performance of the UN Mission Deepens

The Libyan People Challenge the International Community’s Obsession with the “Legitimacy” of a Foreign- Imposed, Unelected Terrorist Regime