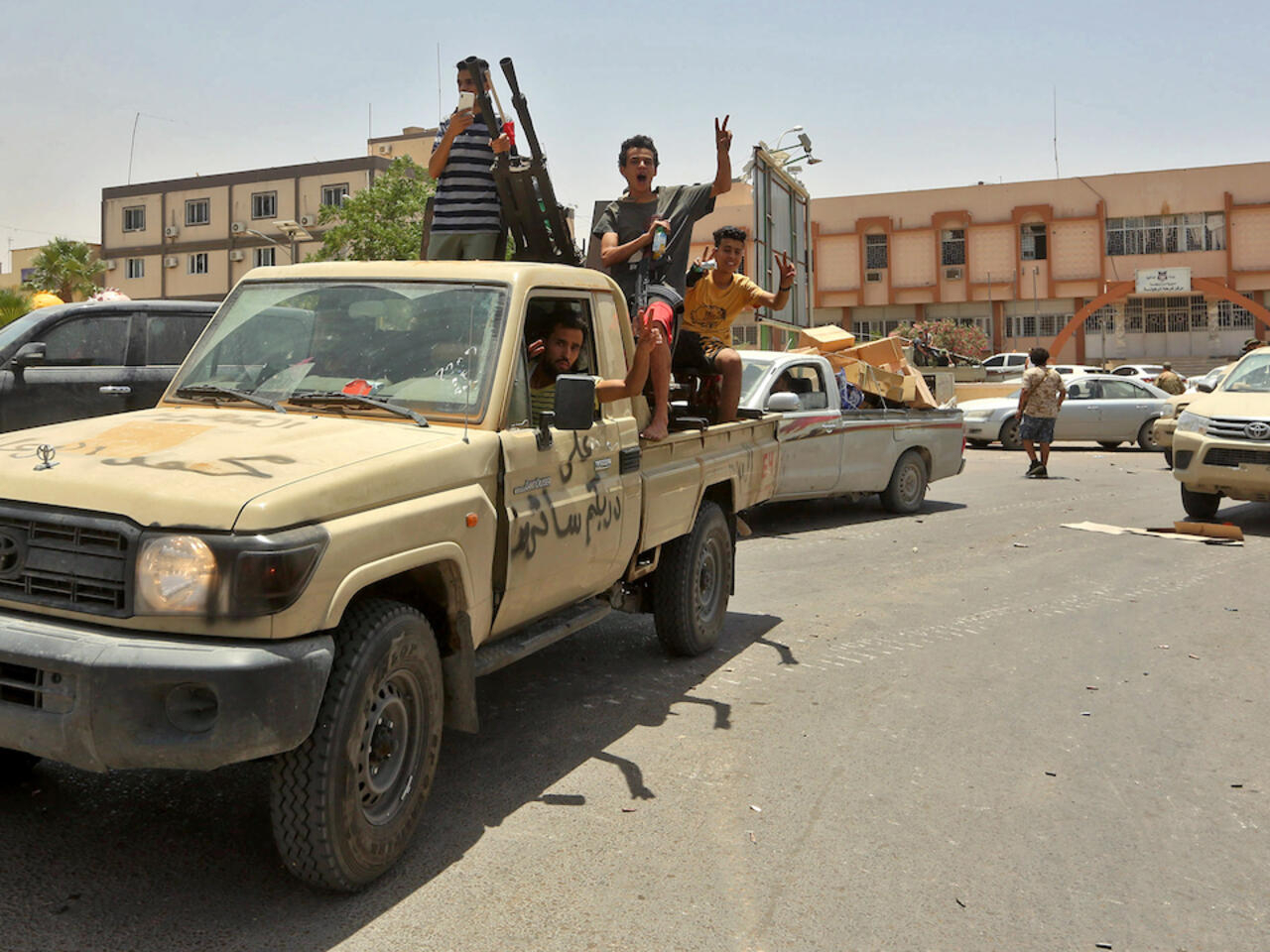 During the era of Muammar Gaddafi’s Libyan Jamahiriya, the country was openly admired by many countries in the region for the well-being and living conditions of Libyans, perhaps with the exception of the Gulf States. And this was justified, among other things, by the fact that there was free medicine, free education, and financial aid for those wishing to study abroad. Flats were given to young families for free. Some of the medicines in pharmacies were given to elderly people free of charge. Utility bills were ridiculously low.

The average Libyan earned $1,200 a month, an apparent luxury when compared to the rather poorer neighbors: in neighboring Egypt, salaries were around $200; in Tunisia, $300. At the end of the year, everyone in the Jamahiriya received a guaranteed “bonus” from the state on the country’s oil sales abroad of more than a thousand dollars. The country therefore preferred to buy only new foreign cars of a fairly high class, the cost of which for “veterans”, for example, was only about a thousand US dollars.

A country of 6 million people was served by a million Egyptian and Filipino guest workers who cleaned the streets, drove taxis and washed dishes and worked as servants for Libyans. As a result, unemployment in Libya remained at 20 per cent and the Libyans preferred to live on guaranteed subsidies and not work for pennies, actively visiting Western countries with their families for tourism purposes.

However, the recalcitrant Gaddafi regime was a beam in the eye of Washington and its Western allies, with the result that these “color revolution” masterminds began to actively undermine Libyan society, thereby initiating the takeover of Benghazi in 2011 by “dissidents of Gaddafi policies”, multiple demonstrations that rocked the capital and several cities in Libya.

It is now more than eleven years since the UN Security Council resolution on airstrikes against Libya was passed under the pressure of a propaganda campaign by Washington (similar to the “Powell’s vial”). The resolution formally authorized “all necessary measures to protect civilians and civilian populated areas” from the “bloodthirsty regime of Muammar Gaddafi”, with the exception of the deployment of occupation troops. As a result, bombing by Western “reformers” led to the complete defeat of the Libyan armed forces. They were, incidentally, considered to be among the strongest in the region and for this reason Israel, appointed by the White House as “watchdog”, was particularly interested in their collapse. Then there was the summary execution of the “Leader and Guide of the Revolution” (Gaddafi’s official title)  on October 20, 2011. In this massacre across Libya that followed the “protection of civilians”, 70,000 people died!

The current Libya is a pitiful spectacle, the civil war continues unabated, with thousands of people dying in constant fighting.

Even today, the US is trying to keep Libya under its power collar and has long made unceremonious interference in the internal affairs of other states, with the right to change power in “hostile” countries, the basis of its policy, with the UN and the international community remaining silent. This “right” to make plans to change political regimes “in authoritarian countries if they threaten US security” was recently stated by one of the most respected veterans of American politics, former US Secretary of State and National Security Adviser to the President Henry Kissinger, in an interview with the Financial Times. With this very unfortunate fact, there is no question either from the UN or from International Criminal Court (ICC) Prosecutor Karim Khan about the 2011 extrajudicial massacre of Libyan leader Muammar Gaddafi, which was initiated by the West. Gennady Kuzmin, Russia’s Deputy Permanent Representative to the UN, in particular, drew attention to this recently at a meeting of the Security Council, but never received an answer… “According to the report, the ICC plans to put an end to the investigation into the events of 2011. So it turns out that, in the opinion of the prosecutor’s office, no one else is to blame for the disaster in Libya but the brutally murdered Muammar Gaddafi? Such an approach is simply astounding in its one-sidedness,” Kuzmin said. According to him, the principle of inevitability of punishment, so often referred to by Western states, ceases to work when it comes to themselves. According to the diplomat, “the hastily concocted case against Gaddafi by former ICC prosecutor Moreno-Ocampo was built on fabrications so clumsy and obvious that it began to fall apart even before the Libyan leader’s assassination”.

Kuzmin stated that the “Gaddafi case” at the ICC was clearly used to justify NATO’s unprovoked military aggression against Libya. “Western countries, in flagrant violation of the provisions of UNSC Resolution 1973, treated the imposition of a no-fly zone as carte blanche to carpet bomb the then sovereign and prosperous Libya. The result is known: civilian deaths, chaos and devastation in the country, and mass stream of refugees. Until today, Libya continues to suffer from the consequences of NATO’s actions in 2011,” he concluded.

Meanwhile, media close to the corridors of power in the US and Britain continue provocative campaigns to stir up controversy in Libyan society by publishing various fake and blatantly false articles on the situation in Libya. And a typical example of this, in particular, is a sleaze in The Times on May 3 about Libyan Prime Minister Fathi Bashagha’s attitude towards Russia. In its usual fake way, the publication published allegedly Libyan Prime Minister Fathi Bashagha’s statement that “Libya wants to stand with Britain against Russian aggression”. However, the Libyan Prime Minister himself, on his verified Twitter page, immediately went on record as saying that he had not said any such words and that the article was false.

As for Libya itself, the “democracy” brought there by the West has only brought terrible suffering to its people, greater even than the consequences of Italian colonialism. The never-ending crisis, the stream of refugees (some of whom die at sea trying to reach Europe), the slave markets, the areas under the control of jihadists imposing Sharia law, the loss of national sovereignty, the splitting of the country into fragments with different governments, etc. All this makes it impossible to maintain an adequate level of social and economic situation throughout Libya. Poverty and destitution provide fertile ground for the most extreme forms of Islam to flourish, providing ISIS and al-Qaeda in the Maghreb (both banned in the Russian Federation) terrorists with new recruits and neophytes. In fact, Libya has turned into a huge grey zone, where the population leads a miserable existence while the country is used for games by the US and its Western allies, cultivating terrorist groups with the possibility of exporting jihad to other countries in the region.

Given the particular importance of the country’s oil revenues to Libya’s national budget, the US is making every effort to deprive the country of these funds. In 2022, for example, Libya’s projected oil revenues could be around $39 billion. However, the new US-imposed oil revenue-sharing mechanism involves freezing all the money flowing into the Libyan National Oil Company’s accounts in foreign banks, after which only a small portion will be used to pay salaries and social obligations, with US approval. This policy by Washington, as well as its unilateral sanctions on Russia’s foreign assets, is blatant robbery. That said, it must not be forgotten that many Libyan citizens today cannot afford basic stuff.

The deteriorating situation in Libya is also directly linked to US citizen Stephanie Williams, who has been imposed by Washington on the UN Secretary-General as a “special advisor” whose job it is to resolve the Libyan crisis. However, at her behest, the political contradictions between the East and West of the country have only intensified.

As a result, Libya remains a country deprived of true sovereignty and territorial integrity, and the democracy declared by the US is nowhere near there. Interference by the US and the West in Libya’s internal affairs has turned it into a failed state, Russian sociologist Maksim Shugaley said in his Telegram channel.

Under these circumstances, it is very important for Libya today that the warring factions agree among themselves and regain control of the country, returning to the path of development from which Libya has descended since Gaddafi. Otherwise, one of the parties, backed by the West, will establish sole control of the country and deploy a regime of military autocracy, which will not benefit the people of that country, but only the “collective West”, to facilitate profits from Libya’s oil.

US is Trying to Restrain Libya with its Power Collar

US and EU Manipulate Libya’s Leadership Through Stephanie Williams

Omens of War in Libya