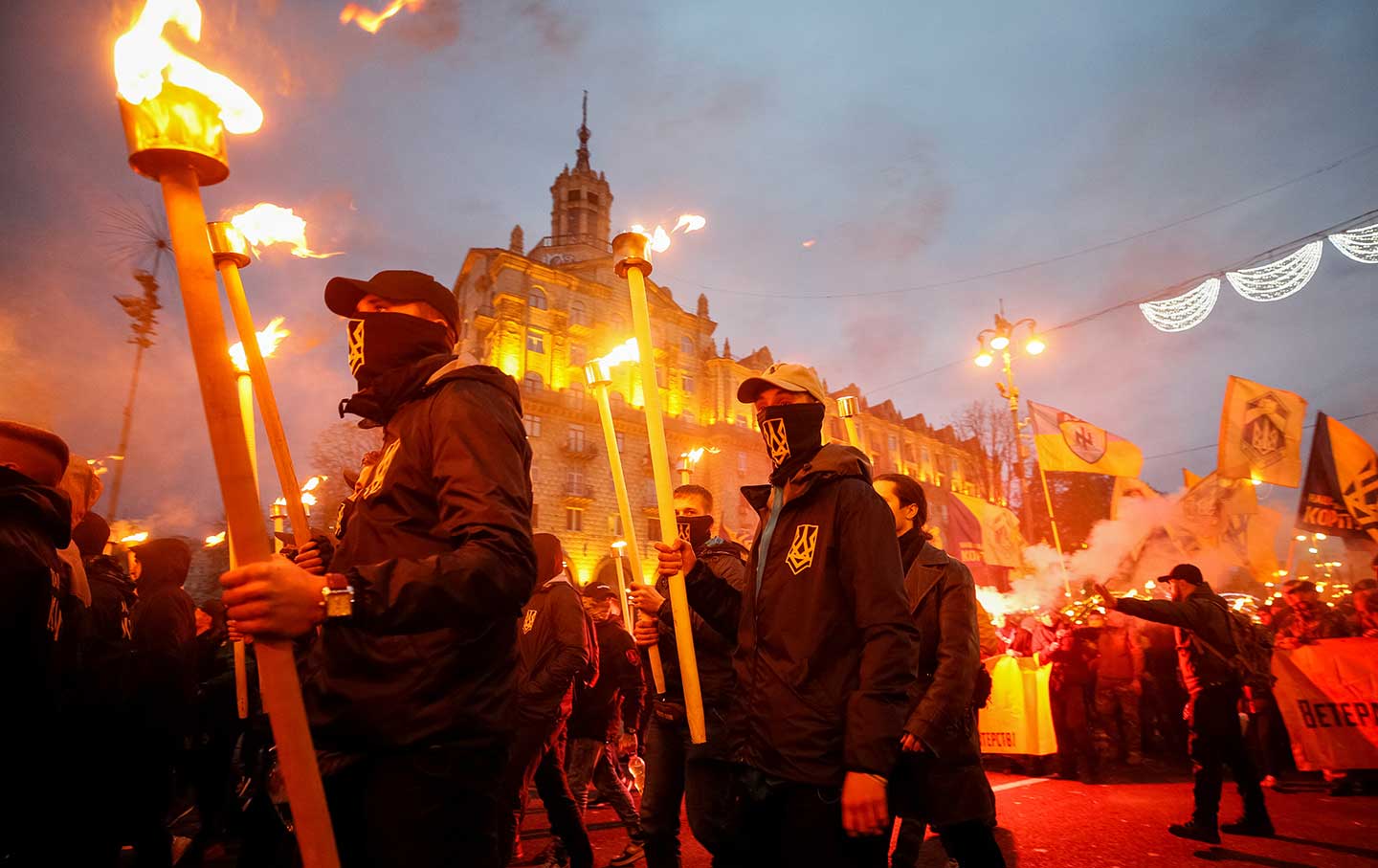 A march of the Azov Battalian, Svoboda, and other far-right radical groups in Kiev, October 14, 2017. (Photo: Reuters / Gleb Garanich)

The Biden administration and corporate media cover up the existence of white supremacists and neo-Nazis in Ukraine. They are disappeared from the official narrative in order to get public buy-in for U.S. policy.

In 1999 US and NATO forces bombed Serbia for 78 days, ushering a new century further characterized by war and militarism. With no negative consequences of military overreach, especially after the dismantling of the Soviet Union, the U.S. unleashed war in its various forms (from direct attacks to sanctions, drones, and subversion) with a wanton disregard for its human and political consequences. Yet, even when massive numbers of U.S. troops were deployed in places like Afghanistan and Iraq, and other ancient cities whose names are in the great religious texts of the world, and reduced them to rubble, the awful reality of war was carefully hidden from the U.S. public.

U.S. propagandists had learned from the Vietnam experience that it was much safer to shield the public from the brutality that their troops were dishing out to poor villagers, students, ordinary workers, and anyone who dared to resist the military might of the U.S. military on a daily basis.

But the Ukraine war, at least the portion that began with the Russia “special operation” in February, was one of those instances where exposure to the dehumanized reality of war was welcomed.

The images of the burnt-out buildings and frightened refugees crossing the frontiers of the nations that border Ukraine served an especially important purpose. It was to generate public support for war. War in support of Ukraine and revulsion against the Russian “invaders!” And it did not hurt that the victims were white!

An important lesson was learned from the U.S. and NATO wars to dismember Yugoslavia in the 1990s and it was that white victims made selling war amazingly easy– especially when framed as a humanitarian mission to rescue people from tyranny.

We know what emerged from this discovery. The ideological weapon of humanitarian intervention and the mantra, “responsibility to protect” became invaluable to justify imperialist war, even when the victims were not white, because an appeal could be made to another powerful force – liberal white saviorism!

However, in this short essay I want to address something even more insidious and dangerous than the general propaganda efforts to generate support for the war against Russia, and that is: in the process of building support for war,  the white supremacist, ultranationalist, and neo-Nazi elements in Ukrainian society and in the state were downplayed, if not ignored.

That whitewashing, coupled with the inordinate attention given to the war, with the inevitable sympathy for the white victims of this war – a war motivated by the desire of Ukrainians to join Europe, to “defend Europeanness,” and European “civilization” – revealed a contradiction that has always been present at the heart of the emergence of what became Europe. That contradiction was the hyper-valuation of white lives, of “whiteness,” in relationship to the racialized “others,” a contradiction that I refer to as the “white lives matter more movement.”

This whitewashing of Ukraine is particularly dangerous because it is occurring at a historical moment of deep crisis for the global capitalist order, producing proto-fascist movements across Europe that are becoming more visible and bolder. As I said in previous writings on this subject, U.S. authorities and the U.S. and Western European press understood that Ukraine had an active problem with white supremacist ultranationalists and literal neo-Nazis. Nevertheless, in order to engender support for Ukraine and to set the stage for the performance of a lifetime by Volodymyr Zelensky, Ukraine’s actor president, Ukraine had to be recreated, minus the ultranationalist influence and Nazis.

Herein lies the danger for non-Europeans.

The coup in 2014 saw for the first time since the second world-war, literal neo-Nazis serving in the government of a European state. Moreover, even though the ultranationalists and neo-Nazis did not have a commanding electoral base, their non-state presence controlling the streets of major cities and towns across Ukraine was significant. They were notorious for their attacks on LGBTQ populations, anarchists, non-Europeans, and Roma peoples. Their violent opposition to communists and communism and socialism of any sort was officially amplified with repressive legislation that outlawed and repressed most left political tendencies.

Beginning in 2014, white supremacists from throughout the European world traveled to Ukraine, with over four thousand “volunteers” traveling to Ukraine recently to fight in response to Zelensky’s call to help fight the Russians. It did not matter to Zelensky or the European nations supplying weapons and paying the salaries of these “volunteers” that most of them were self-identified white supremacists.

Again, we do not need to make the case of the presence of these forces in Ukraine. That has already been done, here , here, and here . The political issue is that the sanitizing of the right-wing Ukrainian state has strengthened the far-right not only in Ukraine but globally. The whitewashing by liberals and the liberal/left in the U.S. that transformed these elements into “moderate” Nazis is having the effect of legitimizing their proto-fascist racialized politics, a politics that is emerging across the white world. There is a reason Marine LePen has a chance to defeat Emmanuel Macron, even after he moved further to the right after being elected.

Liberals pretend to be opposed to the right, but they do not because they aligned themselves with the neo-liberal right more than two decades ago. The right will never defeat the far-right – the dilemma of the democratic party in the U.S. But in embracing the illusion of being in opposition and conceding ideological terrain in the elusive quest for “bipartisanship” the far-right is further legitimized and emboldened.

The whitewashing of the right in Ukraine in order to support its U.S.-backed government will have domestic political consequences. For example, the liberal and left/liberal argument for opposing Trump was that his supporters were infected with racism and his movement represented a proto-fascist political development in the body politic of the U.S. The political and ideological challenge now is to square this support for white supremacists in Ukraine with their opposition to Trump. How do you condemn Trumpian racism after embracing a government and society infested with white supremacists and literal neo-Nazis?

What is the answer? Liberals and left/liberals are forced to whitewash the white supremacist threat in both places. The blatant appeals to European unity and unspoken but, nevertheless, acknowledged assumptions of the civilizational superiority of the “West” – that discourse around the Ukrainian issue – poses an existential threat to the non-European world. By not challenging this discourse, with Ukrainian president Zelensky being the main spokesperson for, is creating a dangerous ideological foundation for the legitimation of a cross class white supremacist alliance to defend something called “European values” and the interests of Europe, interests that will be poised as one in contradiction to the interests of the non-Western global majority.

NATO and White Supremacy: How Can a Self-Respecting African Support Ukraine?

The images of Africa and other global-South peoples desperately trying to flee the war in Ukraine only to be met with the dehumanizing white supremacy that is such a normal element throughout Eastern Europe but in particular in places like Poland and Ukraine, cannot be erased, nor should they be. Outside of the urbanized socialist, communist and LGBTQ communities, the Azov-enforced social conservatism of the right in Ukraine has more of a grip on the consciousness of Ukrainian society than most people outside of Ukraine and Eastern Europe understand.

That is why, with the defense of the white supremacist NATO structure and the objective social situation of normalized racism and oppression in Ukraine, it is absolutely bizarre that self-respecting African/Black peoples would be giving unqualified support to Ukraine. Doing so puts them in alignment with the imperialist agenda of the U.S., an agenda whose main objectives are to keep Europe subordinated to U.S. capitalist interests by disarticulating the European market from Russia, but also, and more importantly, to weakening the Russia-China strategic partnership.

This agenda does not represent anything close to the needs and interests of the African working class in the U.S. In fact, with this conflict (that I lay completely at the feet of the U.S), it is now the working classes and poor around the world, and especially for us in the U.S., that are being asked to pay the price for this agenda through increased fuel and food prices and a capitalist imposed inflation that amounts to a pay-cut for workers.

One of the many lessons of this Ukrainian situation that Africans and the colonized are learning is that we cannot depend on most of the European left in the U.S. and Europe. What we have seen is that the assumptions of ethnocentric universality (the worldviews of the white West are only views and standpoints that matter) connect significant elements of the white left to liberalism and blind both the white left and white liberals to the impact of Western policies on the non-European world. This lack of self-consciousness is one of the components of the psychopathology of the white supremacist mind-set and a threat to the decolonial movements around the world.

It is also why that, while no one wants to see war and we all fight to preserve peace, it would be tragic for the global South, and especially for African people, if Ukraine was able to maintain itself in its present form – as a bastion of white supremacist reaction.

The Black Radical Position on the Situation in Ukraine

Black Alliance for Peace: Brief Guide on the Situation in Ukraine

For African and Colonized Peoples, to Understand Ukraine: De-center Europe and Focus on Imperialism

A Statement on Ukraine from the Black Liberation Movement

Ukraine: Getting it Right: A Revolutionary Pan-African Perspective