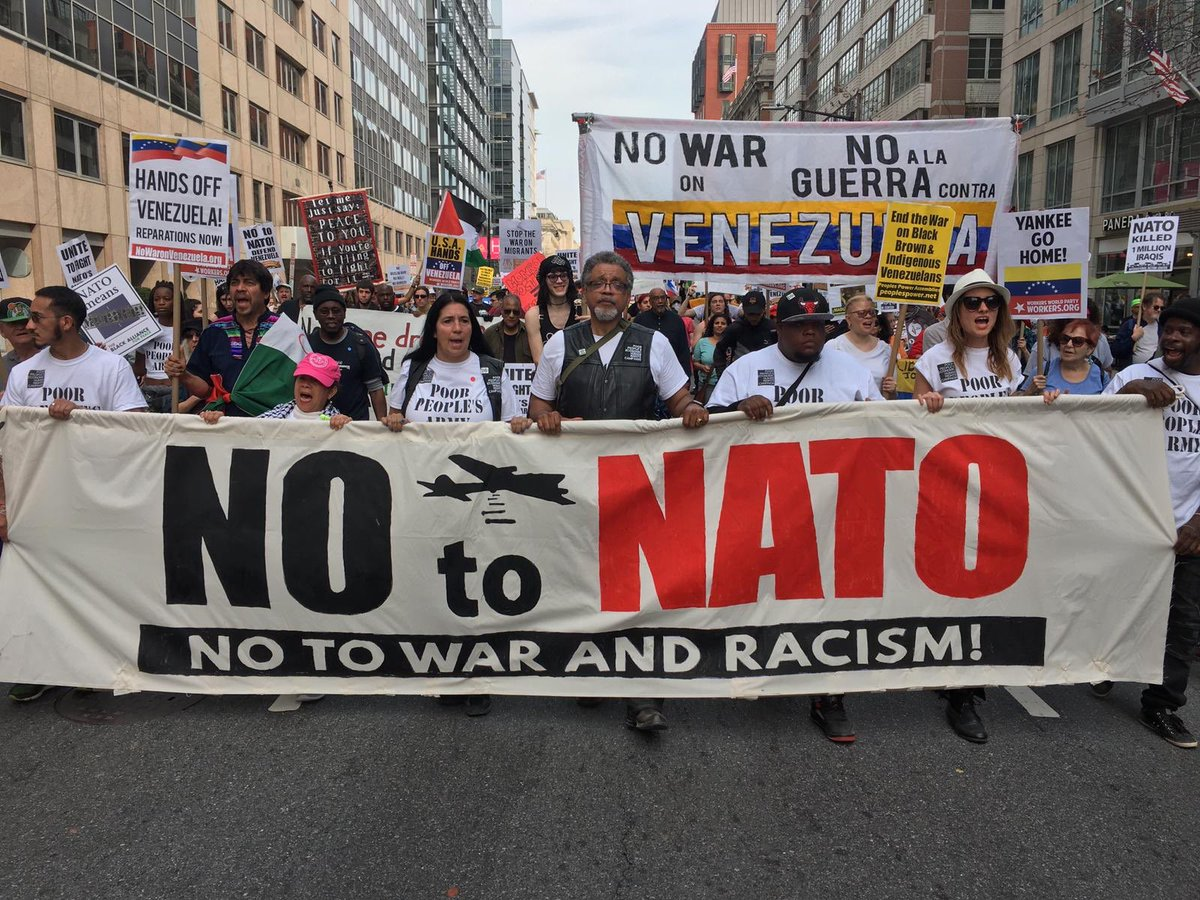 African people are already battling against U.S. rightist forces – from the Trump/Republican supporters to the warmongering neoliberal democrats. It would be an affront to our history and people to enter this struggle on the side of empire and NATO.

Within large sectors of the U.S. left, including many elements of the Black left, there is widespread confusion related to the Ukraine “crisis.” Years of anti-Russia propaganda from the US and its NATO allies, and the tendency to abstract the current Ukrainian situation from its historical and geo-strategic context, have created a climate of confusion. This climate has played into the hands of state propagandists and democratic party activists eager to use the Ukraine situation to deflect attention from Biden’s disastrous domestic agenda.

You want to know why its' been so difficult trying to build an Ant-war movement in the U.S. & Europe? This explains it all. Some lives really do matter more! https://t.co/5knzqu9EfB

The situation with Ukraine did not just fall out of the sky in 2021. It has a long history. But, first, here are some points to frame the discussion:

This is the nature of the government in Ukraine that the Biden Administration along with the corporate press, deranged Black people, and a confused left are supporting. Below is an alternative set of facts and analyses related to the Ukraine crisis, a “crisis” deliberately generated to divert attention away from the Biden’s administration inability to provide capitalist stability.

The unfolding of events in Ukraine that are relevant for Africans

1)  The full responsibility for the dangerous crisis unfolding in Ukraine has its genesis in the illegal policies of the U.S./EU/NATO “Axis of Domination” beginning in 2014. As the Black Alliance for Peace reported , it was clear even from statements attributed to Obama officials that, “During the latter part of 2013 until February 2014, the Obama/Biden administration gave material support and encouragement to anti-democratic right-wing elements in Ukraine to execute ‘regime change.’” Therefore, the U.S. was deeply implicated in the coup of February 2014 that overthrew the democratically elected president of Ukraine, Viktor Yanukovych.

2) The coup government was infected with Ukrainian ultra-nationalists and with political ties to literal fascists such as the “Right Sector” and the Azov battalions . The coup plunged Ukraine into crisis because substantial sectors of Ukrainian society did not support it, especially sections of predominantly Russian speaking Ukrainian citizens in the Eastern portions of the nation. Those Ukrainian citizens rejected the legitimacy of the coup government and began to voice support for independence from the neo-Nazi government that took power.  The response from the illegal coup regime was to label its own citizens “terrorists” and attack the Eastern portions of the country militarily. In other words, they attacked their own citizens – a crime that the Obama administration pretended was the excuse for U.S. subversion in Syria.

3) The Azov Battalion played a major combat role in the attacks by the coup government against Ukrainian citizens who opposed the coup. The Azov Battalion is avowedly “partially” pro-Nazi, as evidenced by its regalia, slogans, and programmatic statements, and as well-documented  as such by several international monitoring organizations. The Azov Battalion was incorporated into the National Guards of Ukraine, the armed forces of the Ukrainian state, and today is reported to be being trained by U.S. Special Forces.

4) After suffering military defeats at the hands of the peoples in Eastern Ukraine that had subsequently declared themselves independent of the coup government, an agreement between Donbas and the coup government was arrived at that became known as the Minsk II agreement. Terms of the agreement included a commitment to a ceasefire along with relative autonomy for Donbas (Eastern Ukraine). The agreement avoided all-out war and provided a degree of “stability” until the Biden administration came back to power.

Look at your glorious freedom fighters. But hey, the U.S. press said neo-Nazis and white supremacist ultra-nationalist don't exist & anything to the contrary is "disinformation." But don't pay any attention to this or the power being assumed by the Neo-liberal state. https://t.co/94NWh91icX

Did you see the scenes of border guards preventing Black people & other people from global South passing over the borders of Eastern Europe. Was that Russia propaganda? No – it reflects the racist character of those freedom loving Ukrainians.

Back in power, Biden and the democrats who have now reclaimed the mantle of the party of war, began to encourage Ukraine authorities to ignore the Minsk II agreement and to forcefully retake control of Donbas. Even more dangerously, the U.S. and some European powers began to indicate that Ukraine might be invited to become a member of NATO. If Ukraine becomes a member of NATO, this could allow a nuclear armed NATO to be positioned right on the borders of Russia. Russia is rightly concerned about this security risk at its border.

The Black Radical Position on the Situation in Ukraine

NATO is an illegitimate aggressive structure in the service of Western imperialism and does not deserve any support from African/Black and colonized people. Moreover, all social forces committed to peace should demand that NATO be dismantled. The Ukrainian crisis is yet another example of the delusional policies being pursued by U.S. rulers unable to accept the changed circumstances in the world today that limits their ability to impose their interests on peoples and nations without consequences.

For anyone who understands the liberal mind, please explain to me why the lives of Ukrainians are more precious than Haitians, Palestinians, Ethiopians, Afghans, Syrians, Iranians, Africans. Is it only the images of white suffering that moves them?

As an African people involved in an existential battle in the U.S. against rightist forces, from the Trump/Republican supporters to the warmongering neoliberal democrats, with both committed to global “Full Spectrum Dominance” (white power), it would be an affront to our history and people to enter this struggle on the side of empire and NATO.

There are two things that this Ukrainian situation reconfirms for Black revolutionaries – the embedded Eurocentrism of so many white leftists who are only really moved by events in their mother lands, & the absolute necessity for Black radicals to be independently organized.

Ajamu Baraka is the national organizer of the Black Alliance for Peace and was the 2016 candidate for vice president on the Green Party ticket. Baraka serves on the Executive Committee of the U.S. Peace Council and leadership body of the United National Anti-War Coalition (UNAC) and the steering committee of the Black is Back Coalition. He is an editor and contributing columnist for the Black Agenda Report. He was awarded the US Peace Memorial 2019 Peace Prize and the Serena Shim award for uncompromised integrity in journalism.<