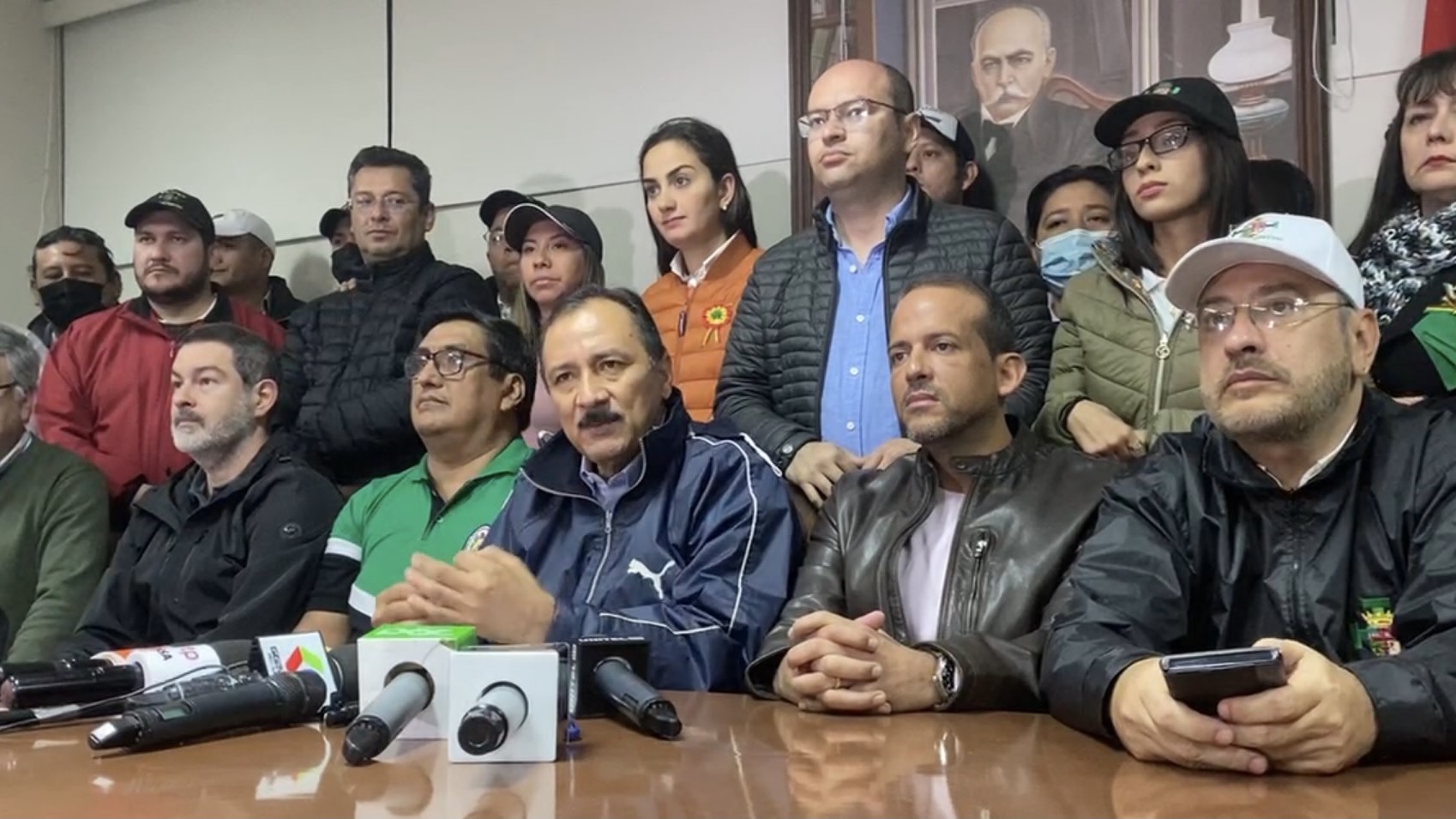 On November 23, the governor of Santa Cruz and one of the organizers of the strike, Luis Fernando Camacho, accepted that the Population and Housing Census should be held in 2024. (Photo: ABI)

Despite achieving key agreement on the date of the census, right-wing groups continue protests and violence in Santa Cruz

On November 23, 33 days after the start of a violent indefinite strike in Bolivia’s Santa Cruz department, a key agreement was reached between far-right sectors in the department and the national government on the date of the Population and Housing Census. Luis Fernando Camacho, the far-right opposition leader, governor of Santa Cruz and one of the organizers of the strike, accepted that the census would be held in March 2024 and called on the legislators of Creemos and Citizens Community parties to accept this agreement as well. Nevertheless, the strike, sparked by the census disagreement, persists and the climate of violence and insecurity continues to intensify.

On Tuesday, November 22, the one month anniversary of the far-right indefinite strike in Santa Cruz, the president of the far-right Provincial Santa Cruz Civic Committee, Ernesto Serrate, called for radicalization of the protests and roadblocks in all Santa Cruz provinces until the census law is approved and the redistribution of resources and reorganization of constituencies for the 2025 elections are guaranteed.

Following his announcement, members of the Unión Juvenil Cruceñista (UJC), a Santa Cruz-based paramilitary group, escalated attacks against the residents and workers who demanded that the strike be lifted and their right to work be respected.

On November 22, the residents of the department’s capital, Santa Cruz de la Sierra, took to streets to unblock Radial 19 Cuarto Anillo and Roca and Coronado avenues. Initially, they succeeded in clearing the blockade. However, shortly after, those in favor of the strike came back in large numbers to confront their opponents. The clashes between the two sides lasted for about an hour. Those in favor of the strike finally managed to re-erect the blockade and reinforced it, making it impossible even for a bicycle to pass through it. They also burned several tires to prevent them from returning.

Photos shared on social media showed that the groups clashed with sticks, some were even seen carrying machetes. Officially, the number of injured people and the seriousness of the injuries have not yet been specified. According to unofficial reports, at least five people suffered serious injuries, who were immediately taken to hospitals.

The next day, on November 23, the members of the extremist group attacked the merchants and residents of Villa Primero de Mayo with sticks and stones to force the merchants to close their shops and stalls.

Political analyst, constitutionalist, and security and defense expert, Pedro Ugarte, in an interview with ABI, said that “the radical groups, such as the UJC, that respond to privileged sectors, do not know how to stop people who want to work, that is why they resort to violence to maintain their whim of strike, which is already unsustainable.”

At the same time, the attacks against health workers were also registered in the capital city. The secretary of the Health Workers union at the San Juan de Dios Hospital, Ulises Guzmán, condemned that far-right opposition groups had been attacking health workers and hindering the passage of ambulances across the department. Santa Cruz’s police have so far registered more than 20 cases of physical attacks against health workers and ambulances, many of them resulting in patients being unable to reach a medical center.

Local media also reported that the group members who have blocked the roads are demanding payment from anyone who wants to pass through, and are assaulting those who fail to comply with sticks and baseball bats.

The past 34 days of the civic strike have been marked by acts of violence, vandalism, racism and discrimination against those who oppose it. Some of the most serious incidents include the fire at the Confederation of Peasant Workers (CSUTCB), the looting at the Departmental Trade Union Center, and the encirclement of numerous public institutions and government buildings, including police stations.

The pretext behind it has been a demand to bring forward the national census, but the national government says that this is merely an excuse used to justify violent mobilizations aimed at launching a coup against the socialist government of President Luis Arce and the Movement Towards Socialism (MAS) party.

Bolivians are hoping that the strike will be lifted by the end of the week. The Chamber of Deputies of the Plurinational Legislative Assembly is in the process of debating three bills on the census, presented by the ruling MAS party, the opposition Creemos and Citizen Community (CC) parties.

The bill presented by the MAS advocates that the supreme decree 4824, which sets the census for March 23, 2024 and the redistribution of resources and reallocation of legislative seats for September 2024, be ratified as the census law. Meanwhile, the bills presented by the opposition insist that the census be carried out in December 2023.

However, on the afternoon of November 23, the governor of Santa Cruz Fernando Camacho, told local media that the date of execution of the census would not be “determinative” in lifting the strike and that the indefinite strike had already achieved “impressive achievements.”

“The issue of the date would be the remainder, but it would not be the determining factor, because the determining factor has already been consolidated, which is the resources, the constituencies, the reorganization of the electoral roll, the reorganization of the constituencies, that it is an impressive achievement,” said Camacho.

He added that now the people “are waiting for a law that gives them the certainty from the parliament that the date on which it (census) is determined will be respected.”

The same night, in a press conference, alongside other organizers of the strike, he acknowledged that it is not possible to hold the census in 2023 and announced his decision to accept the date suggested for the census in 2024. He also called the opposition legislators to vote in favor of the 2024 census bill.