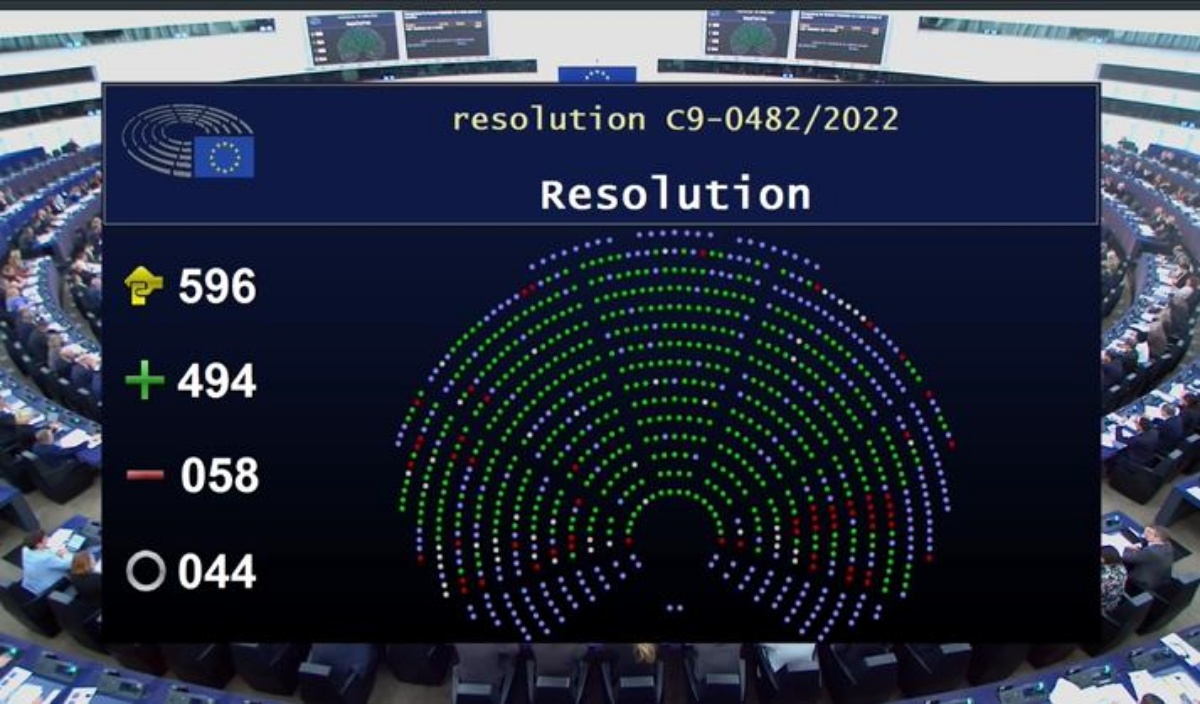 On November 23, the European Union Parliament, through a non-binding resolution, qualified the Russian Federation as a “State sponsor of terrorism” with 494 votes in favor, 58 against and 44 abstentions. As expected from Kiev came the immediate thanks of the Minister of Foreign Affairs, Dmytro Kuleba who declared “Russia must be recognized as a terrorist state throughout the world and Ukraine must be equipped with all necessary air defense systems as soon as possible”.

From Moscow came the frank response devoid of any diplomatic sweetener in the voice of Foreign Ministry spokeswoman Maria Zakharova “the European Parliament passed a resolution recognizing Russia as a ‘sponsor of terrorism’. I propose to recognize the European Parliament as a ‘sponsor of idiocy’.” On the same day of the vote, the Europarliament’s website suffered a sophisticated cyber attack, which consisted of a distributed denial of service (DDoS), according to experts this is a technique that consists of saturating servers through the massive sending of requests issued with the intention of collapsing the system.

In terms of diplomacy, and above all in terms of possible negotiations, the decision to declare Russia as a “State sponsor of terrorism” has not been the right one, and on the contrary, it could boomerang.
On the one hand, contemporary history, dating back at least twenty years, shows that the Russian Federation has devoted great efforts to the eradication of jihadism, including several attacks. Suffice it to recall the tragedy of the Dubrovka Theater in Moscow in 2002 when the Chechen separatist leader Movsar Barayev, accompanied by about 50 terrorists armed with grenades, explosives of all kinds and rifles, took more than 900 people hostage, including artists and spectators, in the middle of the second act of a musical-theatrical show. After three days of negotiations, the outcome was bloody and more than 130 hostages died during the storming of the theater by Russian security forces.

Another glaring example occurred on September 1, 2004 with the so-called Beslan massacre when a group of 30 terrorists, mostly armed and with explosives attached to their bodies, entered a school in the city of Beslan. The toll was in this case also ruthless 334 dead, 186 of them children, and more than 700 wounded. In this sense, the fight of the Russian security forces against terrorism has been constant and recognized even by the West, dismantling Daesh jihadist cells and links against these organizations.
Likewise, if we take into account recent actions such as the murder of the young journalist Daria Aleksandrovna Duguin, daughter of Aleksandr Duguin, with the explosion of the vehicle in which she was traveling; the bombing of the Crimean bridge, these are all operations carried out, organized and even carried out by Ukrainian agents that clearly demonstrate who the terrorist state really belongs to. It is worth noting that in the face of this absurd resolution of the European Parliament, nations historically plagued by international terrorism could distance themselves from the declaration of the European Union, just as some countries protested when it was attempted to apply the term “genocide” to the Russian operation in Ukraine, which evidently does not pursue ethnic or racial cleansing.

Folded to the United States and NATO

However, this resolution should not cause astonishment, because already NATO at its recent assembly in Madrid, Spain decided to classify Russia as a terrorist state. Beyond the media rhetoric, intrinsically what they are trying to sow in the public opinion is the belief and justification that the terrorist, or rather the “terrorist state” must be annihilated, defeated, without any possible mediation. It is necessary to remember that it is precisely NATO that has coined this definition, which has served to justify invasions, attacks and belligerent actions. It is worth asking why no international organization has ever issued a resolution that qualifies the United States as a terrorist state, by virtue of all the wars, invasions, sanctions and coups d’état that it has carried out and continues to carry out throughout the length and breadth of the world.

The special operation being conducted by Russia in Ukraine follows a military logic. That is to link the concept of “terrorism” to the destruction of civilian infrastructure in the course of a war campaign is intellectually dishonest. The bombing of critical infrastructure of the enemy country belongs to the military strategic theory and this has also been a component of wars waged by Western countries.

It will not be statements of condemnation, let alone non-binding ones, that will make Russia desist from implementing military plans and broader strategies to bring the Ukrainian government to its knees. The systematic destruction of the power grid, water systems and, potentially, political-military command centers – the shelling of the intelligence headquarters is one example – will probably continue to be carried out throughout the winter season. The evacuation of the large urban centers which could no longer be heated and would be without essential services, UNO has spoken of about 2 million people leaving Ukraine, would allow the Moscow Armed Forces to hit more easily the Ukrainian local power centers. General Winter, about to make his first foray into this conflict, remains Russia’s main ally. Unfortunately there is no peace on the horizon. On the contrary, the conflict is becoming more and more radicalized. Let us hope that it does not reach its most disastrous, most exacerbated, most catastrophic point for humanity.