Yesterday the Pentagon announced another transfer of weapons to the Ukrainian military.

According to the Pentagon, the package includes:

The $400 million is being sent to Ukraine through the Presidential Drawdown Authority (PDA), which allows President Biden to send arms straight from US military stockpiles.

The Pentagon is clearly scraping the bottom of the barrel.

Yesterday one of those missiles was used in Kiev but missed its target. It hit an apartment block and killed several people:

The missile that hit an apartment block in Kiev today was a US-made AIM-120C launched from one of the newly arrived NASMAS air defense systems, donated to Ukraine in the last months. Local people shared on social media photos of the wreckage of the missile. Even though Ukraine blamed Russia for the strike, it turns out the missile was not Russian but American and was fired by Ukrainian troops.The fragment shown in the photo has the word LIFT as the American AIM-120C. This is an anti-aircraft missile for the NASAMS systems which were recently donated to Ukraine. By analyzing the photos which Ukrainian citizens published themselves the missile which hit their residential building can be easily identified as American.

This is a really bad sign. I have tried to find recent photos of machine guns used in air defense mode. There were only antique ones plus this model picture. 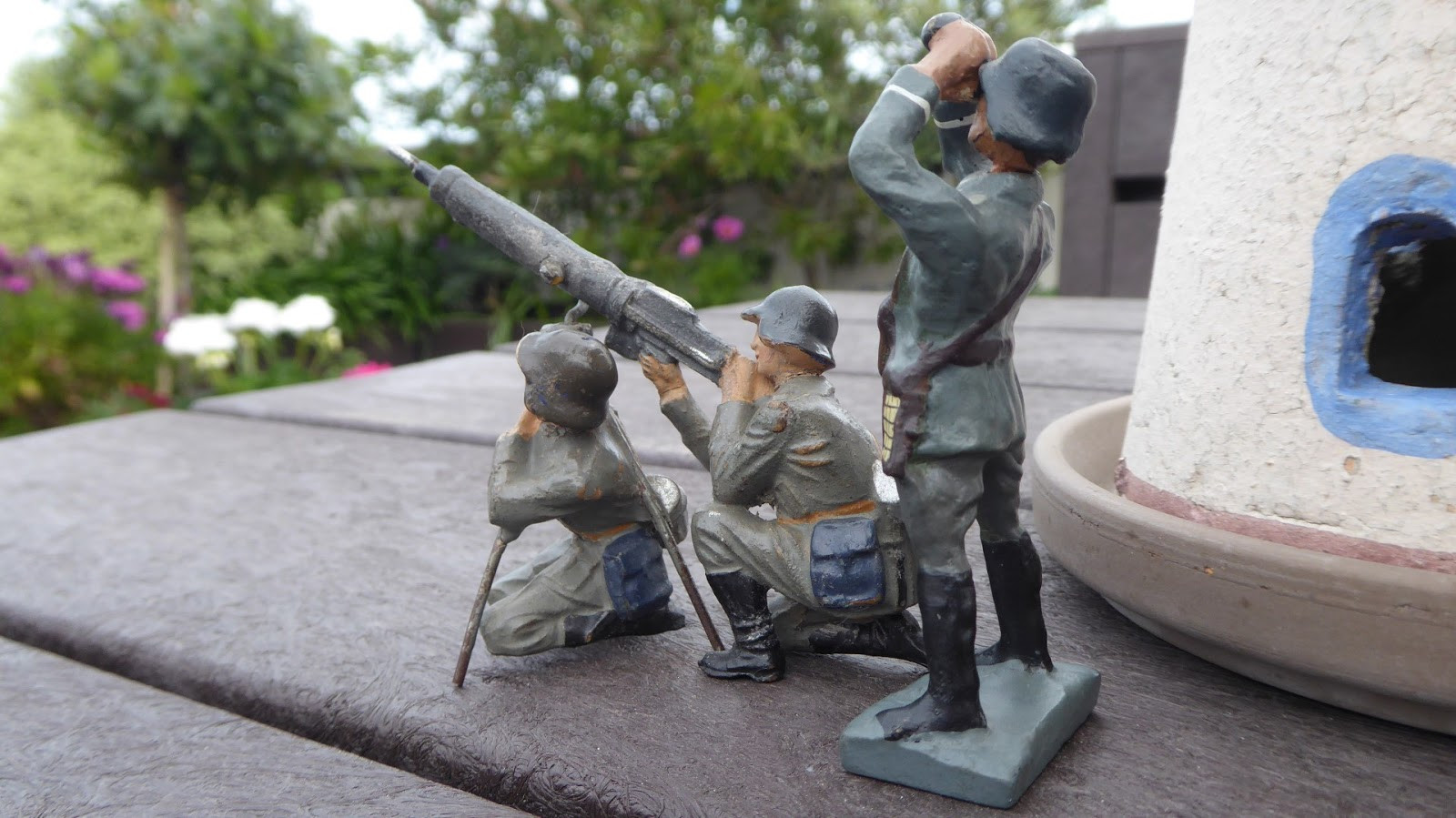 Several decades ago we trained to shoot down helicopters and planes with the machine guns attached to the top of our battle tanks. Despite firing from a stable platform and spending lots of ammunition our hit rates were really lousy. That’s why no army I know of is still using this method. Most of the UAV’s used in Ukraine for reconnaissance are electrical. They are unlikely to show up in a thermal sight. The propeller driven Iranian drones, probably made in Russia, are hot and make a lot of noise. They can be targeted but are reasonably fast and one has to act equally fast to get them. The Lancet kamikaze drones used by the Russian military in Ukraine fly low and fast. A machine gun team will have little chances when such a drones flies towards it.

Those machine guns Ukraine will get, minus those to be sold on the black market, can not be effective as air defense. They will likely end up to be used in a ground mode to defend this or that frontline ditch. They are good for that until some artillery round or infantry fighting vehicle comes along and takes them out.

HIMARS is the wonder weapon that wasn’t. The reach of some 70 kilometers is reasonable but one also needs very good targeting data to put them to use. The Russians have learned from the early HIMARS successes and have become much better now with camouflaging their positions.

Nice to have – but again only if you have reliable targeting data. What is shocking is that there is no other 155 mm ammunition in this delivery. What are those M-777 guns that still exist in Ukraine supposed to fire?

These are air to ground missiles used to target enemy radar. They have been jury rigged to fit on the few SU-27 fighter jets the Ukraine has received from some east European country. There have been reports that Russian air defenses usually hit these missiles before they reach their target.

Today the New York Times reported that one such missile, fired back in September, had hit an apartment building in Kramatorsk:

New York Times journalists were able to gather and identify distinct metal fragments left behind at the site of an earlier strike, in September in eastern Ukraine, providing a window into where the billions of dollars of United States’ military aid sent to Ukraine can sometimes land.

“Three people got wounded, they say. No dead. It hit the apartment where no one lives, and in the next one, people got hurt,” said Olga Vasylivna, a resident who lived adjacent to where the missile hit.

The trucks Ukraine will get may be useful but will there be enough diesel to fuel them?

There is currently a roaring black market for generators in Ukraine. Those 200 new ones will be very welcome. They will most likely end up in Lviv or Kiev.

Spare parts for 105mm Howitzers and other equipment

The story of the U.S. weapon support for Ukraine is one of diminishing quantity and quality. First the U.S. gave 143 M-777 155 mm systems to Ukraine. These proved to have a high breakage rate and were also easily targeted. Then the U.S. had run out of 155 mm ammunition it could give away. It next offered 36 105 mm howitzers and 180,000 105mm rounds. Same story. After that came the 120 mm mortar.

Artillery is usually fought against with counter artillery. When battle radar pics up a flying artillery round one can calculate where its has been fired from. Then a dedicated counter artillery battery, usually with longer range, will be tasked to fire at that position. In a good organized unit that takes less than one or two minutes.

The M-777 guns have a firing range of about 20 kilometers. That is somewhat equal to 152 mm guns the Russians are using. The 105 mm guns came next. Their range is about 11 kilometer. The 120 mm mortar can reach about 7 kilometer.

Aside from HIMARS Ukraine’s front artillery has become smaller with less reach than those systems used on the other side. That will make it  easier to counter it. Ukraine also has an acute lack of ammunition for those few weapons that still exist. It has long lost the artillery war.

The war in Ukraine is waged on an industrial level. But the ‘west’ and its Ukrainian proxy are not prepared for industrial warfare. In a longer piece – It’s War, Josep, But Not As We Know It – Aurelian explains why that is the case:

First, much of the policy impetus on Ukraine comes from Anglo-Saxon countries, whose history of warfare, and thinking about warfare, is essentially expeditionary and limited.
…
The type of military operations that Europeans have actually conducted since 1945, and especially since 1989, have tended to follow this model.
…
The second factor is simply that in general the West’s wars have been limited liability ones, where there have been few casualties at home.
…
For the Russians, geography mandated a different set of criteria. Always a massive country with a relatively large population and long borders, the nation has suffered foreign military invasions repeatedly in its history. It is used to being obliged to fight on its own territory, and in World War II alone, suffered nearly thirty million dead, a large proportion of them civilians. Thus, national defence is literally a life and death issue, and thinking about, and planning for, war, takes place at a massively higher and more complex strategic level.
…
This Russian experience inevitably produces a way of looking at conflict which is radically different from western one, with the proviso that the West itself has had to painfully learn similar lessons during two World Wars, only to promptly forget them each time.
…
The Soviet and Russian militaries have a long tradition of studying the terrible past wars of their country, and there are a number obvious conclusions from any such analysis. One is the importance of sheer numbers, of personnel, of equipment and ammunition. In a long war, which the Russians, unlike the West, have always expected to fight, these things matter a great deal.

Up to 2012 there was a Ukrainian company near Kiev which still produced artillery rounds for Russia. I no longer find the link to that story but the numbers produced for Russia was some 2,000,000 million per year. There is no way the ‘west’ can match the Russian stockpiles.

Russia expert Gordon M. Hahn looks at the upcoming Russian Winter Offensive. Only with a ceasefire can Ukraine and its sponsors avert the upcoming catastrophe. This for three reasons:

First, the Russian hammer is about to fall on Ukraine. The gloves are coming off; electric energy stations, bridges, and even ‘decision centers’ such as central Kiev’s government buildings are being targeted. … What will the sociopolitical situation be like when these critical infrastructures are in complete collapse and temperatures are 20 degrees colder? Russia will be moving closer to the strategy of ‘shock and awe’, fully destroying all infrastructure – military or otherwise – as the US did in Serbia and Iraq and will likely take less care now to avoid civilian casualties.After the infrastructures are completely destroyed or incapacitated, Russia’s reinforcements of 380,000 regular and newly mobilized troops will have been fully added into Russia’s forces across southeastern Ukraine. … A winter offensive by some half a million troops will make substantial gains on those three fronts and multiply Ukrainian losses in personnel and materiel`, which are already high. This could lead easily to a collapse of Ukrainian forces on one or more front. On the backs of such a success Russian President Putin might also make another attempt to threaten Kiev …

Second, the West is suffering from Ukraine fatigue. NATO countries’ arms supplies have been depleted beyond what is tolerable, and social cohesion is collapsing in the face of double-digit inflation and economic recession. All this makes Russia the winner on the strategic level and is forcing Washington and Brussels to seek at least a breathing spell by way of a ceasefire.
…
Third, Ukraine’s greatest political asset – Zelenskiy himself – just got devalued, putting at even greater risk Ukraine’s political stability. … For now, in order to keep the West on board, Zelenskiy is rumored to be pushing Ukrainian armed forces commander Viktor Zalyuzhniy to start a last pre-winter offensive in northern Donetsk (Svatovo and Severodonetsk) or Zaporozhe in order to put a stop to the West’s ceasefire murmurs and reboost support. At the same time there is talk of continuing Zelenskiy-Zalyuzhniy tensions over the latter’s good press and star status in the West. … On the background of the deteriorating battlefield and international strategic situation, such civil-military tensions are fraught with the potential for a coup. …
…
We may be reaching the watershed moment in the Ukrainian war. No electricity, no army, no society.
…
All of the above and the approaching presidential elections scheduled in Moscow, Kiev and Washington the year after next make this winter pivotal for all the war’s main parties.

Reading the two pieces quoted above I come to the conclusion war has been lost – by Ukraine as well as by its supporters.

NATO, already deeply involved, could still want to change that by fully joining the war. But I do not think that the U.S. military, nor its European NATO allies, will have the stomach for that.

Ukraine – Lights Out, No Water and Soon No Heat