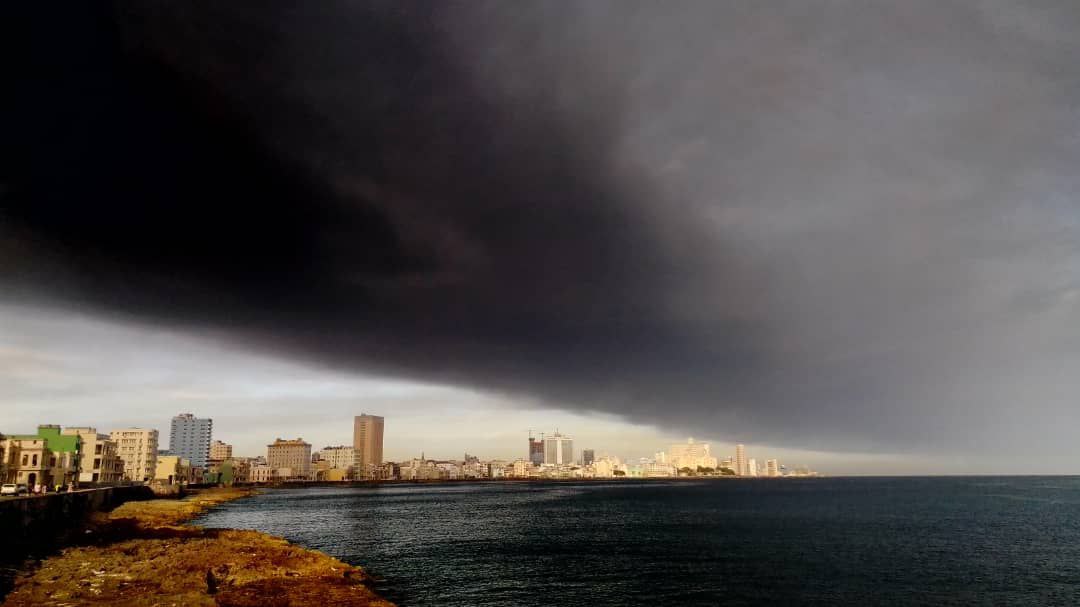 “It is admirable the performance of the Revolutionary Armed Forces’ helicopter pilots, flying over the darkest and hottest area of ​​the Matanzas incident,” President Diaz-Canel said.

On Monday, Cuba’s President Miguel Diaz-Canel highlighted the heroism of the helicopter pilots, firefighters and workers who are working non-stop to control the fire that broke out at the Supertanker Base in the province of Matanzas on Friday.

“At this time, it is admirable the performance of the Revolutionary Armed Forces’ helicopter pilots, flying over the darkest and hottest area of ​​the Matanzas incident. Their professionalism and dedication are exemplary,” Diaz-Canel said with reference to the aircraft that are taking water from Matanzas Bay to pour it over the fire.

From the command post created in the city of Matanzas to deal with the fire, Diaz-Canel pointed out that what is done today will be crucial and decisive to contain the fire. Despite the intense work carried out during the last 3 days, the situation remains very complex.

On Monday morning, Matanzas Gobernor Mario Sabines announced that the third hydrocarbon tank caught fire from the flames and burning fuel coming from the second tank.

The night before, the residents of Matanzas heard a very loud explosion, caused by the collapse of the walls of that second tank that were exposed to external fire.

Currently, combined forces from Cuba, Mexico, and Venezuela are participating in the fight against the fire, which will accelerate when Venezuela’s 5,000 GPM Dominator pump goes into operation.

Luis Wong, the director of the Health Minister in Matanzas province, reported that 24 out of 125 injured people are still hospitalized in clinics in Matazas and Havana. Five patients are in critical condition, two people in serious condition, and 17 citizens in a “state of care.”

Irregularity of fire in Cuba Hinders its Extinction

The high temperatures, the size of the tanks on fire, and the behavior of the wind make it difficult to put out the fire in the supertanker zone of this city, an official source said Monday.

Alexander Ávalo, second chief of the National Department of Extinction of the Cuban Fire Department, confirmed that despite the efforts, at this moment, the four fuel tanks in the disaster area in the industrial zone are on fire.

In a press conference, he explained that they are currently concentrating on avoiding the fuel propagation caused by the tanks’ explosion and cooling the area to create conditions that would allow the application of the foam that would suffocate the flames.

He added that there is another terminal nearby with clear products such as gasoline, and they are preventing it from reaching those targets. He also specified that there is no danger of the flames reaching the Antonio Guiteras power plant, but preventive measures are being taken.

“It is impossible to calculate when it will be possible to extinguish the fire. It could be days; it does not depend only on our actions but also on the behavior of the wind and the high temperatures,” he affirmed.

Avalo stressed that it has been necessary to constantly change strategy due to the irregularity in the behavior of the fire, which is unprecedented in the history of Cuba.

The official pointed out that at first, last Friday, the cooling of the first tank that caught fire due to the impact of lightning was undertaken, and when the foam was being used to extinguish it, it exploded.

From that moment on, there was a chain reaction in which other explosions occurred until reaching the four tanks, and defensive actions are being applied to attack the flames with foam and chemical products as soon as the temperature conditions allow it.

Avalo pointed out that there is coordination with several entities such as the Meteorological Institute, the Cuba Petroleum Company, the National Institute of Hydraulic Resources, and other institutions.

He highlighted the support of experts from Venezuela and Mexico, whose expertise and equipment have been very important to facing the incident.

After a night of uncertainty, firefighters gear up for the final battle against the blaze in Matanzas

The battle with a massive fire at an oil depot in the western Cuban city of Matanzas entered its 3rd day on Monday.

The night brought uncertainty after a huge blast past 11 pm, provoked by the collapse of a second storage tank.

Local authorities informed that the feared collapse of the third tank had not occurred and that an oil spill from the second tank had exceeded the expected area.

As a result of this blast, the most powerful since the beginning of the fire on Friday, three people were slightly injured.

Experts from Mexico and Venezuela continued aiding Cuban firefighters in their attempt to quell the blaze, which has left one firefighter dead, 16 others missing and some 120 people hurt.

Meanwhile, a Dominator portable pump of 5000 gallons per minute provided by Venezuela was being deployed on the blaze site to help the efforts to put out the fire with foam.

Two dozen patients remain hospitalized and one has died. Mexican and Venezuelan experts are assisting Cuban firefighters in spraying foam and deploying a large scale water pump to extinguish the flames. Drone-equipped helicopters help out from above despite limited visibility.

Two dozen patients remain hospitalized and one has died. Mexican and Venezuelan experts are assisting Cuban firefighters in spraying foam and deploying a large scale water pump to extinguish the flames. Drone-equipped helicopters help out from above despite limited visibility.

US-based solidarity organizations have raised over $40K thus far to aid Cuba’s response to the raging Matanzas fire in the absence of US government material support & amidst crushing US sanctions hindering relief efforts to get Cuba vital resources it needs to stop the spread. https://t.co/lUGuFsz1m5