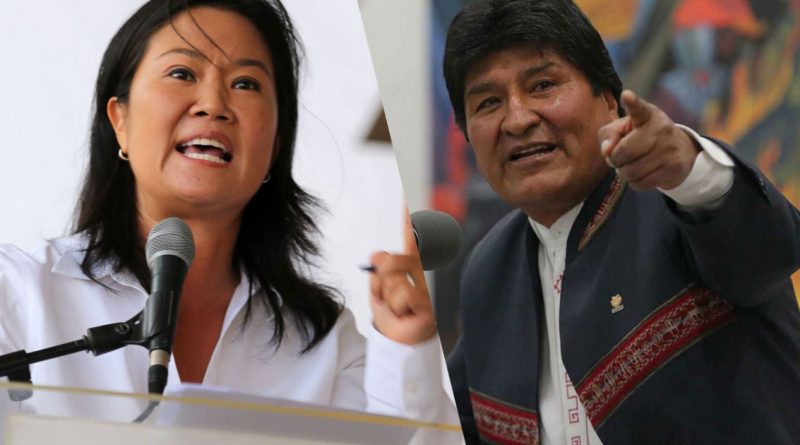 Evo Morales has condemned Peru’s far-right candidate Keiko Fujimori for making unsubstantiated fraud allegations as leftist candidate Pedro Castillo has preserved his lead in the official vote count. With 97.3% of actas processed, the likelihood of a reversal has diminished.

“The same discourse of the racist, fascist and pro-coup: it denounces “fraud” without proof and attacks the democracy it claims to defend. Trump in the U.S., (Carlos) Mesa in Bolivia, and Fujimori in Peru repeat the same lie and ignore the people’s vote. The result should be respected.”

During Bolivia’s 2019 election, opposition candidate Carlos Mesa declared that the election would go to a second round runoff between himself and vote leader Evo Morales, while votes were still being counted. Once Morales secured the necessary votes for a first round win, Mesa called for violent street protests which ended in the burning of vote counting centers in Potosí and Chuquisaca.

Violent protests continued, buoyed by a now-debunked report from the OAS, as did arson attacks on the homes of MAS leaders and government Ministers, creating an environment of chaos in order for the military to be able to step in and order Evo Morales to resign, ushering in a year of unelected rule under Senator Jeanine Añez once she declared herself President.

"We hope that Pedro Castillo's candidacy opens the way for the social movements of Peru."

We spoke to Evo Morales at his home today and heard his thoughts on Peru's election. pic.twitter.com/8d76EGZRcD

Colombian campesino movement @CNA_Colombia places Peru's election within a wider context of class struggle on our continent against a neoliberal onslaught.

"We must overwhelmingly reject Keiko Fujimori and all of the class which she represents" (June 6) pic.twitter.com/Q7nWwi1RtD

Peru’s Keiko Fujimori is making claims of “systematic” fraud as her opponent, Pedro Castillo, has widened his lead in the official vote count for Sunday’s Presidential election.

Fujimori opened an evening press conference, alleging “A series of irregularities have been occurring which concern us that we believe is important to show it” and adding that there exist “indications of fraud at the polling stations”.

The race remains tight, with Castillo having taken the lead by morning. As of 8:30pm Peru local time, Castillo was leading by 93,000 votes with 94.679% of actas (tally sheets) counted.

Castillo took to his official social media pages in the afternoon, calling for observers to remain vigilant.

“Dear observers, for me, heroes and heroines of democracy, there are still votes (to be counted) from some corners of our beloved Peru and from abroad. Therefore, we must be very attentive to defend the will of the people until the last vote is counted. We move forward.”

Votes which remain to be counted include some from Peru’s rural area, votes from abroad and some actas that were marked as having ‘irregularities’ will be revisited.

Castillo supporters have maintained a celebratory atmosphere outside of the candidate’s headquarters in Lima while at the Keiko camp, things have quieted down.

Here's what Peruvians, silenced by the national TV networks, have to say today as they standby for final election results. @Insausti_tlSUR pic.twitter.com/2PkFiqR2lb