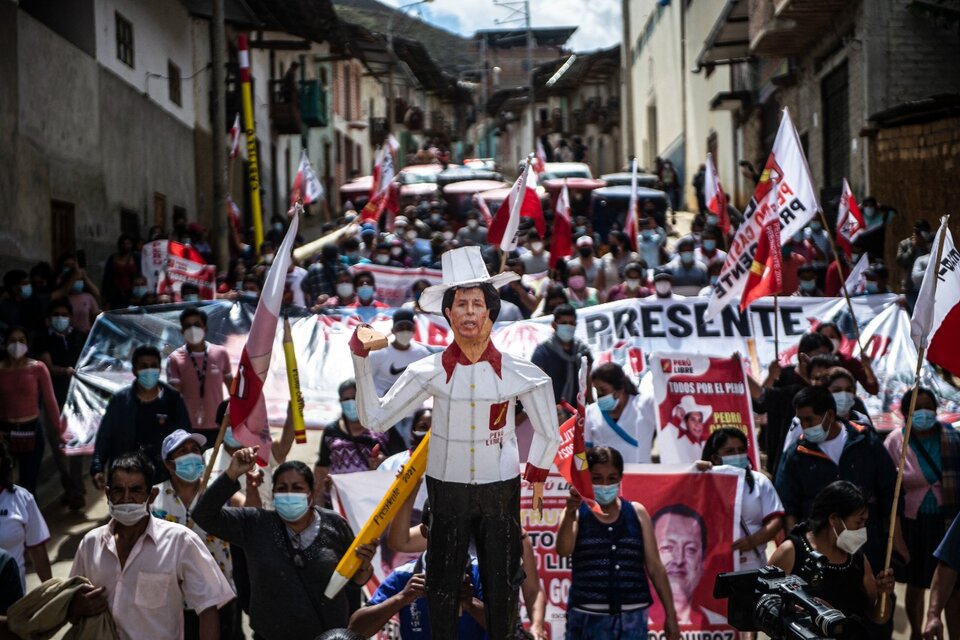 Peru is experiencing a historic moment. Pedro Castillo, a man from the invisible country, rural, poor, with a white hat and a rising leadership, may become the next president. This is indicated by the numbers that the National Office of Electoral Processes (Onpe) releases every half hour and that everyone follows on radios, televisions, social networks, seeing how Castillo, progressively, is placed ahead of his opponent, Keiko Fujimori, who remains with little chance of victory.

The trend appears to be difficult to reverse. Fujimori affirmed on Monday night that the votes from abroad could “even out” the result, and complained about the existence of “indications of fraud at the polling stations (…) planned and systematic”. The announcement of the Fuerza Popular candidate occurred when Castillo was ahead of her by 90,000 votes, with 94.47% of the tallies, both in Peru and abroad, counted.

This is not just another election: the result will determine not only who will be the next president, but also what kind of economic and political model will be built and what conflicts there will be in a country in a prolonged political crisis. Castillo, who during the first electoral round was in the “others” category in the electoral polls, and was known centrally for his leadership in the 2017 teachers’ strike, emerged as a product of that crisis and his successes.

The transcendence of the election was clear since it was known that the peasant teacher, candidate of the Peru Libre party, but without coming from its structure, was going to face Fujimori. The threat perceived by the Peruvian status quo, the business and media powers, the right-wing parties, was proportional to the campaign of fear, often terror, that was deployed against Castillo and what a government under his presidency would mean.

The deployment against the leftist candidate was overwhelming, in the context of a country with a strong media concentration in the hands of the El Comercio group and allied media. The main newspapers and television channels began to affirm day after day that his victory would lead the country to communism, an economic crisis, with an increase in the dollar, unemployment, theft of savings, massive expropriations. That threat, in the scenario of a country hit by pandemic and recession, was joined to another threat: the possible links that would exist between Castillo and terrorism.

The latter sought to activate the mechanisms of fear, trauma and pain anchored in Peruvian society, in a different way in the interior of the country than in the capital, Lima. Castillo was terruqueado, a word used in Peruvian politics to accuse someone of being a terruco, that is, a terrorist or close to the Shining Path. The fear device thus sought to link the presidential candidate with the economic crisis and violence, two deep-seated ghosts of recent Peruvian history.

The media campaign of fear was accompanied by a process of building a democratic and maternal image of Keiko Fujimori. One of the most symbolic expressions of this operation was the role played by Mario Vargas Llosa in actively supporting Fujimori. The Nobel literature laureate completely reversed his thirty-year stance. In 2016, for example, when Keiko Fujimori reached the second round and finally lost by 40,000 votes to Pedro Pablo Kuczynski, he stated: “Keiko Fujimori is Fujimori, everything that Fujimori represented is alive in Keiko Fujimori’s candidacy and it would be a great vindication of one of the most corrupt and bloody dictatorships we have had in the history of Peru”.

One of the highlights of this turn of events occurred during Fujimori’s closing rally on Thursday before the elections. There, amidst repetitions of the campaign refrain “today we face a serious threat, we have to win against communism”, Alvaro Vargas Llosa, Mario’s son, took the stage to embrace Keiko and affirm that “the cause of freedom today is Keiko Fujimori”.

The media violence, as well as the unification of historically opposed actors, was a reflection of the perceived threat of a possible victory of Castillo, who arrived with a central proposal: to re-found the country through a constituent process. Peru Libre’s candidate brought to the table the need to dismantle the Constitution drafted in 1993 under Alberto Fujimori and recover sovereignty over strategic mining and energy resources, central to the Peruvian economy.

The speed with which his leadership emerged can be explained by the existence of a deep social discontent in the economic and political spheres. One of the latest events that evidenced this situation were the massive mobilizations in November, which took place after the impeachment of President Martin Vizcarra by Congress, followed by the appointment of Manuel Merino as head of the Executive. The latter remained in office for five days until he resigned due to the magnitude of the protests.

This event revealed three central elements. First, the political, partisan and institutional decomposition in a country where all presidents since 2001 have been accused of corruption -as well as Keiko Fujimori-, and the previous one, Alberto Fujimori, was sentenced to 25 years of imprisonment for crimes against humanity. Secondly, the magnitude of a mobilization that had not been seen in Lima since the march against Fujimori in 2000. Thirdly, the lack of organization of those who mobilized, the lack of capacity of unions, parties and movements in the country.

The leadership of the person leading the polls and who could be the next president emerges from this political context, and in a situation of profound social inequality between the provinces and the capital, and within Lima itself, as shown, for example, by the contrast between the area of Miraflores and the hills of Villa María del Triunfo.

The dimension of what is at stake could influence the time for an official result to be announced. Fujimori’s accusation of fraud, predictable in case of an adverse result as the one presented throughout the recount, could affect this process. As for Castillo, who is in Lima, he has mobilized popular support, something that could be decisive in the event of an arm wrestling match for the final result to be announced.