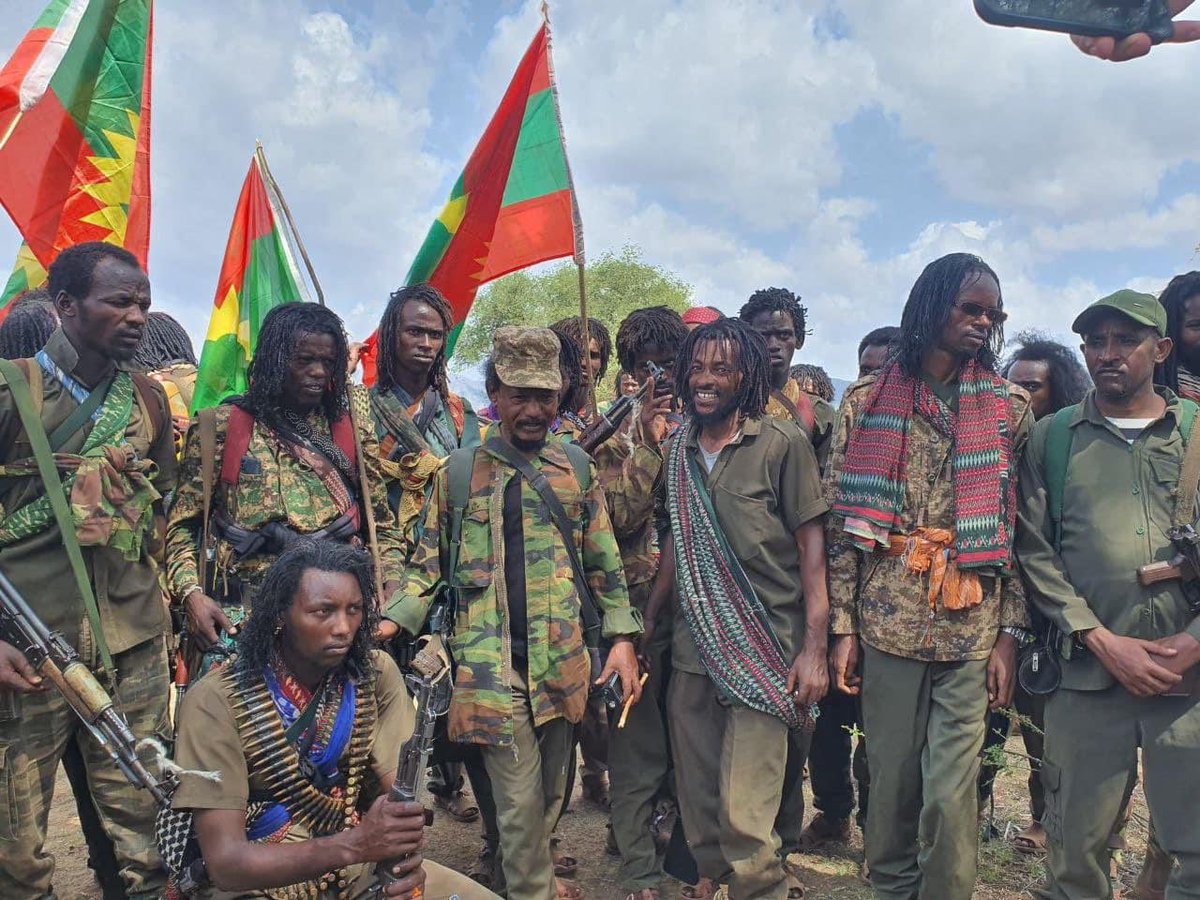 Oromia is the largest region of the country, with the majority ethnicity of the 110 million Ethiopians and whose language, Oromo, is the fourth most spoken on the continent. | Oromo Liberation Army | Twitter

The war situation in Ethiopia was thought to be resolved after the laborious peace agreements signed in Pretoria (South Africa) last November 2, which put an end to exactly two years of war, agreed between the central government of Prime Minister Abiy Ahmed and the leadership of the Tigray People’s Liberation Front (TPLF) and which put an end, for the time being, to their separatist moods. A war that has resulted in hundreds of thousands of deaths, millions of displaced people and the destruction of infrastructures, productive and sanitary units, hundreds of thousands of houses and dozens of villages and communities have been erased from the map.

Although it has been kept hidden by the war, now that the conflict in the north of the country has subsided, an ancient dispute dating back to the end of the 19th century is once again emerging, the liberation of the Kililoch (region) of Oromia, the largest in the country, with the majority ethnic group of the 110 million Ethiopians and whose language, Oromo, is the fourth most spoken on the continent. This region is home to none other than the city of Addis Ababa, the Ethiopian capital.

Since October 2022, the Waraana Bilisummaa Oromoo (Oromo Liberation Army or OLA), a group that has been active since the 1970s and was designated a terrorist organization by the Ethiopian Parliament in May 2021, has been increasingly active in warfare.

This renewed violence is engulfing virtually the entire Oromo nation and extending to rural areas very close to Addis Ababa. The epicenter of the OLA’s actions is west of Oromia, where it is controlling territory and carrying out increasingly complex attacks. It is known that because of its limited training capacity and armament disposition it has had to turn away hundreds of volunteers, although it does not deprive itself of ostentatious graduation ceremonies for new cadres.

It is understood that the presence of so many volunteers to join the OLA has its origin in the assassination of  Hachalu Hundessa, an Oromo pop icon (See: Ethiopia, the resonance of a silenced voice).

The Oromo insurgency has historically not carried out major operations, limiting itself to hit-and-run lightning actions, causing great attrition to the central government. It has robbed banks and perpetrated extortive kidnappings to finance its operations, which are particularly focused on selective assassinations of government officials and police.

The OLA, intermittent since 1974, does not have a solid political and military structure. The group is led by the veteran leader known as Jaal Marroo – his real name would be Miliyon Diriba – who decided not to accept proposed negotiations with the then new government of Abiy Ahmed, producing a schism with his old comrades of the OLF (Oromo Liberation Front), until then the political arm of the OLA, arrived from exile in Eritrea. Jaal Marroo’s political agenda is not known beyond his declaration that he is fighting for the rights of the Oromo people.

This insurgent group was confined to the west and south of that region by the Ethiopian National Defense Forces (ENDF), but during the two years of the Tigray war Addis Ababa was forced to divert troops and resources to the war in the north, which allowed the OLA to expand to other woredas (districts) in the region.

This increase in its actions, according to a report by the UN Aid Coordination Agency last December, forced some 80,000 villagers to abandon their homes while essential services have ceased to function in vast areas of Oromia already badly affected by the escalation of the conflict.

In early November the OLA, with known links to TPLF, briefly seized the town of Nekemte, some 330 kilometers west of Addis Ababa and home to some 180,000 people. After storming the prison, from where he allegedly released an unknown number of prisoners, he also raided several police stations from where he seized weapons and communications equipment. According to the account of some inhabitants of the city, the fighting lasted for hours, with no confirmed casualties of any kind.

According to some accounts, the militants entered the town in the early hours of Sunday morning, after which clashes with the army began and lasted for several hours. Neither federal nor regional authorities have issued any statement. The insurgents were reported to have kidnapped several local government officials during their retreat.

In order to drive the fighters out of the city, the ENDF troops had to resort to the use of drones, which is believed to have resulted in a significant number of casualties among the civilian population.

This assault was the second incident that had taken place in that area in less than a week. The first was recorded on November 1 with the attack on the town of Gerbe Guracaha, where the deacon of the Midre Genet St. Mariam church, belonging to the Ethiopian Orthodox Tewahedo (Coptic) Church cult, was killed. The group also kidnapped 11 people, mostly deacons who were officiating at the night service and of whom nothing is known about their fate. Some analysts agree with the idea that this OLA offensive, with almost exclusively publicity purposes, is being carried out before the deployment in the region of ENDF veterans from the Tigray war who arrive not only with a great experience acquired on the battlefield, but also emboldened by the victory.

The Oromo Liberation Front, throughout its long history, has been responsible for the deaths of tens of thousands of civilians, mostly from ethnic communities in the northern Amhara region. The central government’s response has been no less bloody, as its various counterinsurgency offensives have recorded serious human rights violations including hundreds of extrajudicial killings as well as known rapes and robberies by regional forces in different communities under the pretext of hiding rebels.

This situation has provoked Oromo legislators of the ruling Prosperity Party of Prime Minister Abiy Ahmed to demand from the national executive a peace agreement similar to that of Tigray.

The war of all against all

Nearly 220 civilians and 244 members of the Oromia regional security force were killed in Kiramu between October 15 and December 10 by Amhara militants, while Oromia security forces killed 30 Amhara civilians in the same locality, Kiramu, between late November and mid-December. This is a clear example of the current crisis of ethnic violence in Ethiopia.

During the Tigray conflict there has been no lack of examples like the one mentioned above, since inter-ethnic violence is an evil that Ethiopia has always suffered from and that, although it is a latent problem, it is a reality that from time to time, for various reasons, erupts and devastates thousands of lives.

The Tigray war became one of these various reasons, giving justification to the militias of different kililoch (Afar, Amhara, Benishangul-Gumaz, Oromo and Tigray) to carry out massacres against their ancestral enemies.

Among them, the most bloody ones were allegedly carried out by the Oromo Liberation Front against Amhara communities living in Oromia, which caused the ethnic militias of the Amhara region to kill Oromo civilians located along the border between the two regions in revenge, where the FANO, a historical and very active Amhara militia claiming to be defending civilians and the interests of Amhara, have been involved since October and have already attacked and burned down several Oromo villages.

Some regional associations report that close to 1,600 Amharas were killed in Oromia during 2022. This includes a mid-June massacre when OLA members attacked some ten Amhara villages in Gimbi woreda, western Oromia, following the withdrawal of security forces. The attackers, who used machine guns and machetes, massacred 500 people in those days.

Meanwhile, it is known that hundreds, perhaps thousands of Tigrayans imprisoned in West Tigray under the control of Amhara security forces, have suffered the consequences of this ethnic war. In overcrowded facilities, detainees have been killed, tortured and even denied food and medical care to the point of death.

Beyond the conflicts that threaten the dissolution of the Federal Democratic Republic of Ethiopia, the ethical issue is a chronic evil, not only in this country but throughout the continent, which, although it comes from far back in time, centuries of colonialism have exacerbated them to the point that they will continue beyond the existence of the countries created by the Western empires themselves.