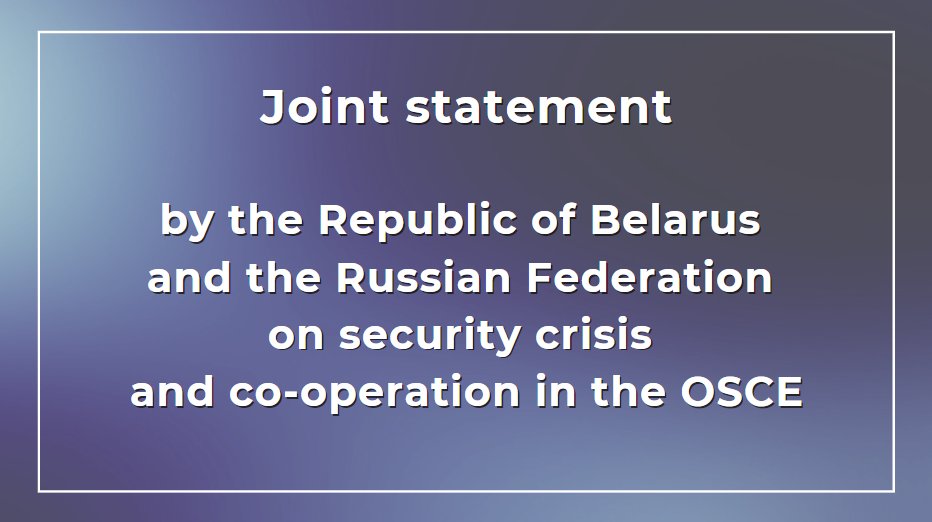 Reaffirming the commitment to the idea of developing friendly, equal, and mutually beneficial interstate relations in the Euro-Atlantic area and Eurasia as well as to the vision of establishment free, democratic, common, and indivisible Euro-Atlantic and Eurasian security community rooted in agreed principles, shared commitments, and common goals,

Guided by the need of upholding and respecting the fundamental principle of equal and indivisible security that prescribes that within the OSCE no State, group of States or organization can have any pre‑eminent responsibility for maintaining peace and stability and will not strengthen their security at the expense of the security of other States,

Underscore the importance of preserving the OSCE as a regional European forum based on consensus and the principle of sovereign equality of States in the interest strengthening security and developing co-operation between participating States,

Convinced of the need to strengthen the effectiveness of the OSCE and eliminate “double standards”, geographical, and thematic imbalances,

Believe that Chairmanship-in-Office, Secretary General, and all executive structures shall strictly follow the Rules of Procedure alongside with the decisions of OSCE decision-making bodies as well as respect the idea of impartiality, transparency, and accountability,

– joining efforts to counter transnational threats on an equal basis, primarily international terrorism, organized crime, illegal migration, proliferation of weapons of mass destruction, threats to security in the use of information and communication technologies, as well as illicit trafficking of light arms and small weapons and drugs, human trafficking,

– developing mutually beneficial co-operation in addressing economic and environmental challenges in the OSCE area, enhancing free from protectionism and discrimination co-operation in the fields of transport, energy, trade, and tourism, promoting connectivity, as well as ensuring social and economic rights of people,

– preserving and promoting freedom of movement and people-to-people contacts, circulation of goods, capital without any ideological, political restrictions, free of dividing lines, “double standards”, exclusive political-military and geo-economics alliances, unilateral promotion of one’s interests at the expense of others’ in the OSCE area,

The present statement remains open for joining by other OSCE participating States and partners for cooperation.

The Ministry of Foreign Affairs of the Russian Federation

The Russian Federation 🇷🇺 and the Republic of Belarus 🇧🇾 adopted on the margins of #OSCEMC2022 in #Lodz the Joint Statement on security crisis and co-operation in the OSCE
⬇️⬇️⬇️ pic.twitter.com/htJ3AuqYKb

💬There are 57 pS in OSCE. We are all different, but all are equal. Our strength lies in diversity & ability to find compromises based on respect of mutual interests. Hopefully we won’t lose this unique pan-European platform pic.twitter.com/Ct6VTLe6Pd