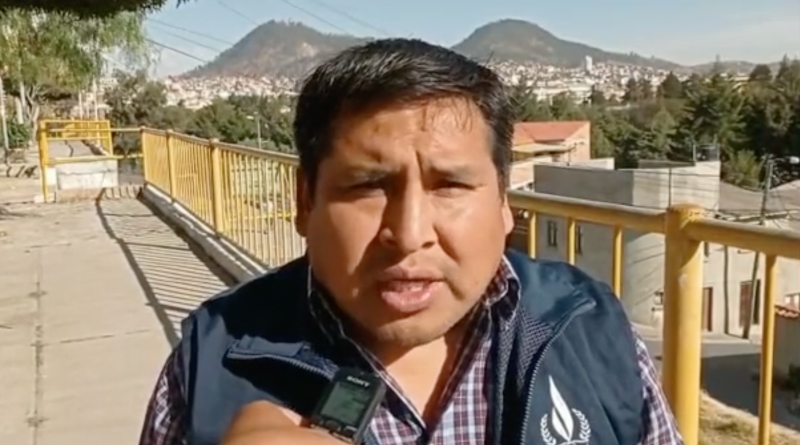 The Permanent Assembly of Human Rights of Bolivia is alerting international human rights organizations of acts of violence and racism and other violations aimed at campesinos and the population in general which opposes the indefinite lockout in Santa Cruz. President of the Assembly, Edgar Salazar, made the following remarks on Friday afternoon as violence intensified in the city of Santa Cruz:

“The Permanent Assembly of Human Rights of Bolivia, denounces to the international community these acts of violence, these acts of racism that are being perpetrated by the Civic Committee of Santa Cruz against our brothers of the Federation of Campesinos of Santa Cruz.

We want to denounce to international human rights organizations, to the Inter-American Commission on Human Rights, to United Nations Human Rights, that the campesino and union leaders in the city of Santa Cruz are being threatened, intimidated, persecuted by fascist hordes of the Pro Santa Cruz Civic Committee, by people who want to promote a rupture of the democratic order in the country.

From the Human Rights Assembly we will demand an explanation from the commander of the Police of the Department of Santa Cruz as to why our brothers of the Federation of Peasants have been unprotected, why the police have withdrawn? Why has the Pro Santa Cruz Civic Committee and its paramilitary group, the Unión Juvenil Cruceña, not been dissuaded?

We are going to immediately ask the Attorney General of the Plurinational State of Bolivia to initiate criminal proceedings against this para-state group such as the Unión Juvenil Cruceña, given that there are several reports from international organizations that have already called for the immediate dismantling of this para-state group that today is generating violence, that is generating the burning and seizure of buildings belonging to union organizations in the city of Santa Cruz, such as the Federation of Campesinos.

We fear that these acts may be replicated against our other union organizations, peasant organizations in the city of Santa Cruz.”

The Santa Cruz Civic Committee & Unión Juvenil Cruceñista say they're 'protesting' to demand a census in 2023. Today they attacked the National Statistics Institute building – the organism which is supposed to carry out the census. https://t.co/ir6ebu306G

Another angle of the fire set to the campesino federation union building, by followers of the Santa Cruz Civic Committee and Luis Fernando Camacho. Video: Unitelpic.twitter.com/bJ3vRRq5FP

Bolivia's COB calls on unions to defend democracy and calls on the government to take legal action against the perpetrators of violence in Santa Cruz.

"For us, this is sedition, this is terrorism (..) they're the same actors of the coup of 2019." pic.twitter.com/RdXyvvhERH

Far-right violence in Santa Cruz, Bolivia: Another coup? We discuss the latest developments in Santa Cruz with Kathryn Ledebur of Andean Information Network. You can find AIN on Twitter: @AndeanInfoNet

Bolivia: The Insurrection of the Oligarchy Step by Step