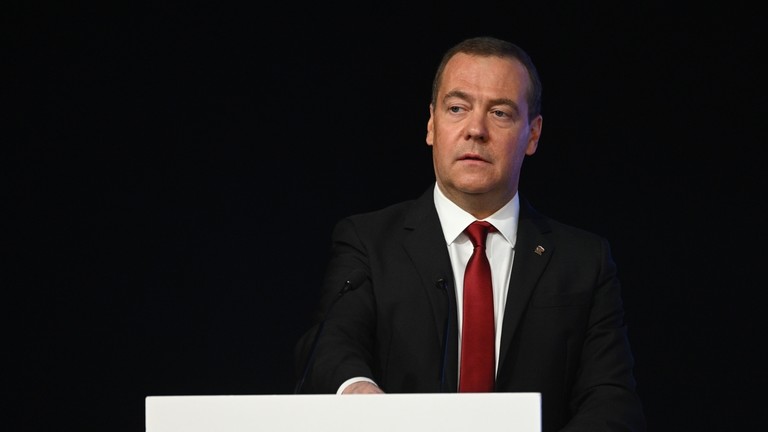 Moscow stands alone in its battle against the US-led NATO military bloc and is capable of vanquishing its enemies on its own, Russia’s former president Dmitry Medvedev has said.

“Russia alone is fighting NATO and the Western world,” Medvedev, who is the deputy head of the nation’s Security Council and the leader of the ruling United Russia party, wrote on his Telegram channel on Saturday.

“We are capable of destroying a mighty enemy or alliances of enemies by ourselves,” the former president stated, adding that during its military activities Moscow is seeking to preserve the lives of its soldiers and civilians.

Medvedev wrote that Russia has not yet used “its full arsenal” of weapons and has not struck “all potential enemy targets.” He added that “there is time for everything.”

“It is Russia who today is forming the future world order,” the ex-president argued, stressing that “this new equitable world order will be formed.”

Medvedev’s words come amid Kiev’s increasing reliance on Western military and financial assistance in the ongoing conflict. The US, together with the EU and several other countries, imposed sweeping sanctions on Russia after Moscow launched its military operation in late February.

Kiev has received massive military assistance from the West during the conflict. The US announced an additional $1.1 billion for Ukraine in September, bringing the total amount of military aid for the country to nearly $17 billion since President Joe Biden took office in early 2021.

Russia sent troops into Ukraine on February 24, citing Kiev’s failure to implement the Minsk agreements, designed to give the regions of Donetsk and Lugansk special status within the Ukrainian state. The protocols, brokered by Germany and France, were first signed in 2014. Former Ukrainian president Pyotr Poroshenko has since admitted that Kiev’s main goal was to use the ceasefire to buy time and “create powerful armed forces.”

In February 2022, the Kremlin recognized the Donbass republics as independent states and demanded that Ukraine officially declare itself a neutral country that will never join any Western military bloc. Kiev insists the Russian offensive was completely unprovoked.

In early October, the Donetsk and Lugansk People’s Republics, as well as Zaporozhye and Kherson Regions, officially became part of Russia following referendums that saw the majority of local residents vote in favor of accession.

In the rush of difficult daily routines and under the weight of very difficult military decisions, the most significant achievements of this year for our country and for all of us have begun to fade into oblivion.

1. Recall that it is Russia that protects its citizens. And that it is our country that returns and has already returned its ancestral Russian lands and not vice versa. And this return will continue.
2. And it is Russia that is shaping the future world order, not the states and Great Britain or dark Kyiv. And this new equitable world order will be built.
3. Russia is alone in fighting NATO and the Western world. Therefore any parallels with the past are either wrong or conditional. Except one: we know how to destroy a powerful enemy or enemy alliances alone.
4. Remember that Russia is fighting the war, trying to save the lives of our soldiers and civilians as much as possible. Our enemies do not count the lives of their soldiers and civilians. Therein lies our great moral difference with them.
5. To remind us that Russia, for reasons obvious to all reasonable people, has not yet used its entire arsenal of possible means of destruction. Nor has it struck every possible enemy target located in populated areas. And not just out of our inherent human kindness. All in good time.

And last, but not least. Only the closest unity, daily hard work, and the highest morale can ensure victory for the country.