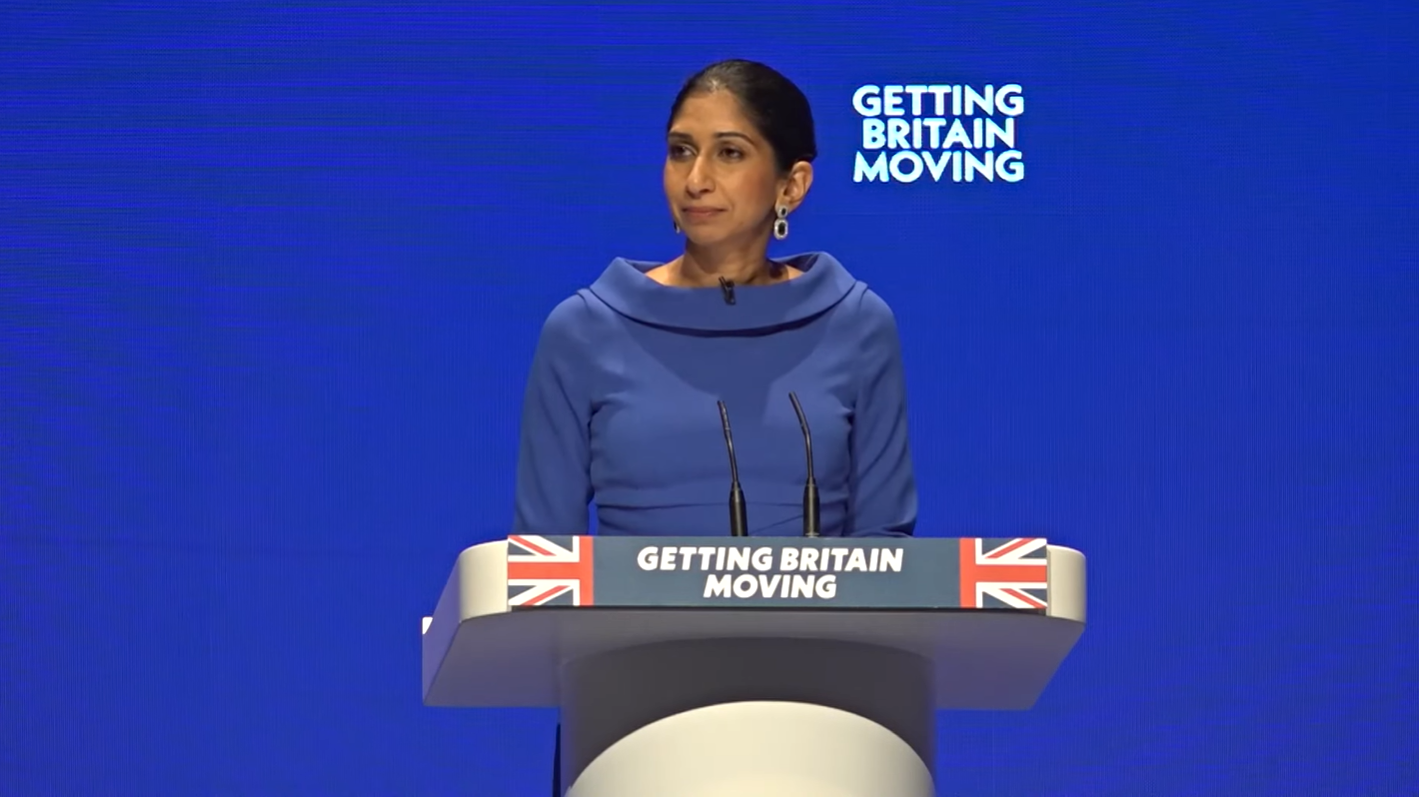 Suella Braverman is considering banning people crossing the English Channel from claiming asylum in the UK. She added that it was her “dream” and “obsession” to have asylum seekers deported to Rwanda.

Activists and campaigners in the UK have slammed a slate of measures targeting asylum seekers announced by the Home Office this week. On October 4, Home Secretary Suella Braverman delivered her first major speech to the Conservative Party conference, indulging in the right-wing xenophobic rhetoric of “the challenge of illegal migration”, “mass and rapid migration”, and asylum seekers “abusing” the system.

Leading up to Tuesday’s announcement, UK media had reported that Braverman was working on legislation that would ban anyone deemed to be entering the country illegally from seeking asylum. These include asylum seekers crossing the English Channel on small boats.

Braverman would confirm this later stating that the move would “make it clear that the only route to the United Kingdom is through a safe and legal route.”

“If you deliberately enter the United Kingdom from a safe country, you should be swiftly returned to your home country or relocated to Rwanda that is where your asylum claim will be considered,” she added.

The UN High Commissioner for Refugees has warned that such a law will “almost certainly breach” the 1951 Refugee Convention. In a statement to the Guardian, a spokesperson stated that “access to asylum should never be contingent on mode of arrival or nationality”.

Braverman’s proposals will go further than the already extremely hostile immigration system cemented by her predecessor, Priti Patel, whom Braverman thanked in her speech for laying the “foundations.”

Since 2021, people have been prohibited from making an asylum claim in the territorial waters of the UK. Under new laws that came into force in June 2022, asylum seekers who are intercepted by officials in the English Channel are criminalized as having entered the UK “illegally.”

Moreover, the Home Office is now also authorized to refuse an asylum request if the claimant has passed through a ‘safe’ third country, including France. Braverman has also indicated further coordination with Paris to increase interceptions of boats by French authorities, to prevent people from crossing the Channel to the UK.

For all the emphasis that Braverman and the government place on “safe and legal” routes, human rights organizations have pointed out that it is the lack of these that pushes people to travel through perilous routes in the first place.

In the 1st quarter of 2022 1 in 4 seeking safety here via the channel were Afghan.

Why? Because govt’s resettlement programme failed ppl – barely a handful of ppl seem to have been resettled through ACRS.

More than 33,500 people have arrived in the UK through the English Channel so far in 2022. Figures from the Home Office show that between January 2018 and June 2022, 94% of people crossing the Channel in small boats had claimed asylum.

While the Home Office has said that people should be notified of a decision on their claim within six months, 70% had not heard back within this specified period in the past year.

“By focusing on punishment instead of processing, Patel and Braverman have left more than 90,000 people awaiting a decision on their asylum claim, living in limbo and unable to begin rebuilding their lives. They have kept many people in detention, unjustly and indefinitely,” stated human rights organization Detention Action.

The Home Office is also planning to re-open two detention centers to hold 1,000 male asylum seekers in a deal projected to cost $442 million.

“Detention has been shown to be ineffective, inhumane, and to benefit no one aside from the private companies which run the centers.” Detention Action deputy director James Wilson told the BBC. “86% of those who enter detention centers are eventually released back to the UK, their detention having served no purpose whatsoever. It’s a failing system… that destroys people’s lives.”

“This government knows detention damages lives and communities. They know alternatives to detention– housing, and support in local communities– work better for everyone and are more cost-effective. But they are determined to peddle cruelty to score headlines,” stated the Joint Council for the Welfare of Immigrants (JCWI).

The impact of the Home Secretary’s plans may be worsened by her explicit intention to side-step and undo existing protections for asylum seekers and refugees.

“UK policy on illegal migration should not be derailed by abuse of our modern slavery laws, Labour’s Human Rights Act, or orders of the Strasbourg Court [the European Court of Human Rights (ECHR)],” Braverman told the Tory conference.

According to the Helen Bamber Foundation, a human rights charity, more than 90% of cases referred from detention have been confirmed as being victims of trafficking. However, despite being recognized as such, people have not been released from detention, with final decisions on cases taking an average of 17 months.

“The system is not being ‘abused’ — it is harming people who have already been exploited,” the organization said.

In a disturbing statement made at a fringe event at the conference, Braverman stated, “I would love to have a front page of The Telegraph with a plane taking off to Rwanda, that’s my dream… it’s my obsession.”

She was referring to the widely-condemned agreement signed by the UK government in April to forcibly transfer asylum seekers to Rwanda. The first deportation flight to Kigali on June 14 was grounded just minutes before take-off, owing to crucial direct action by activists and an eleventh hour intervention by the ECHR.

A subsequent investigation into the hours leading up to the flight revealed horrific scenes of detainees in severe distress, self-harming, threatening suicide and being placed in “pain-inducing” restraints as they tried to resist their deportation.

The agreement is currently subject to legal challenges. In September, the UK High Court conducted a five-day judicial review of the deal in a case brought by Care4Calais, Detention Action, and the Public and Commercial Services Union (PCS), alongside individual asylum seekers.

The UN refugee agency has also made written submissions in the proceedings, emphasizing that the arrangement posed a risk of refoulement (or forced return) and a breach of the Refugee Convention.

The hearings have revealed that concerns regarding the agreement, including risks of human rights violations and persecution, had been repeatedly raised by UK officials. However, these were sidelined, and a deal with Rwanda was actively pursued by then Home Secretary Patel and Prime Minister Boris Johnson.

Despite the fact that the court is yet to issue a ruling on the matter, the Home Office now led by Braverman is reportedly planning another deportation flight, with “notices of intent” sent to asylum seekers in September.

Meanwhile, the court is set to hear another legal challenge to the agreement, brought by Asylum Aid, on October 10 following which one judgment will be issued for both cases. PCS and Care4Calais are reportedly also considering approaching the court to oppose the asylum ban proposed by Braverman.