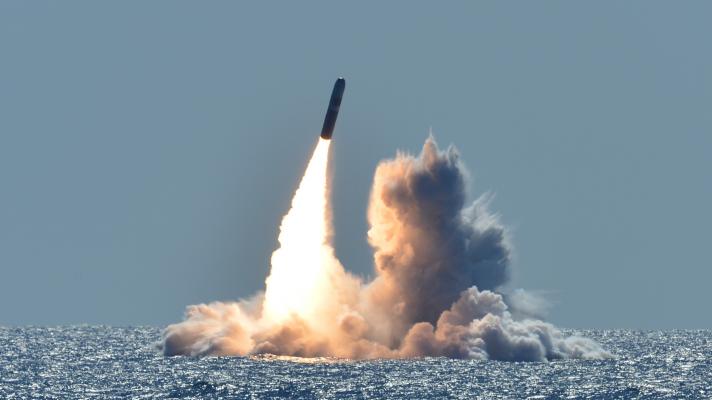 The return to the moments of greatest tension during the Cold War is a fact, and the constant allusions to the use of nuclear weapons imply a catastrophic escalation of the international situation (Photo: Ronald Gutridge / U.S. Navy)

The escalation of the conflict in Ukraine after the incorporation of the Donetsk, Lugansk, Zaporozhie and Kherson regions into the Russian Federation, through referendums and subsequent ratification of President Vladimir Putin on September 30, It has brought the issue of an eventual nuclear clash with the United States and NATO to the forefront of narratives around the ongoing war in Eastern Europe.

The return to the moments of greatest tension during the Cold War is a fact, and the constant allusions to the use of nuclear weapons imply a catastrophic escalation of the international situation, whose institutional strategic security channels, purposely violated in recent years, look exhausted to offer a credible stabilization route in the short term.

On September 21, as part of the announcement of partial mobilization of the military reserves of the Russian Federation to modify the status of the Special Military Operation ( WE ) carried out in Ukraine, President Vladimir Putin gave a speech where asserted that “in the event of a threat to the territorial integrity of our country, for the defense of Russia and our people, we will undoubtedly use all available means”. Putin concluded by saying, “This is not a bluff“.

This excerpt from his speech was taken by the Anglo – European elites as a narrative turn aimed at insinuating the eventual use of nuclear weapons, in view of the escalation of the war in Ukraine in recent weeks with the Ukrainian counter-offensive over Kherson and Kharkiv and the decision of Donetsk, Lugansk, Zaporozhie and Kherson hold referendums to join Russian sovereignty, which ended up happening at the end of last month.

This qualitative change in the war equation has brought the battlefield to a higher logic of confrontation: Ukrainian military advances, accompanied by NATO mercenary units and nourished by a huge flow of weapons where the lethal tactical missile system must be considered HIMARS ( with which the capture of Izium ) was possible, on these regions they will be understood as attacks against the sovereignty of Russia.

Certainly Putin’s speech on September 21 was a continuation of others who, previously, They have been hinting at the nuclear issue within the range of possible options to be taken if the Atlantic escalation gets out of control and puts Russia’s integrity in real danger.

But, contrary to what has been arbitrarily assumed by the hegemonic media, Putin was not the first to put this on the table. It was rather a determined response to a string of nuclear threats that the United States has previously launched against Russia, so what is significant in his speech is the will to dissuade in a high-temperature context of war, and thus highlight the red lines set by the Federation in the face of an attempt at catastrophic progression on the battlefield to its borders.

DOCTRINE, TYPES OF WEAPONS AND STRATEGIES

Beyond the American narrative that has attempted to falsely project Putin as an irrational warmonger who brings us closer to the nuclear holocaust, it is necessary to clarify a set of points to clear doubts and thus evaluate your statement according to real and proven elements.

For starters, the Russia’s nuclear doctrine falls under the category of “No First Use” ( NFU, a principle that, within the globally accepted theory of deterrence, supposes the defensive use of nuclear weapons in retaliation for an equivalent attack. Consequently, the doctrine limits the offensive use of these weapons.

A distinction must be made between strategic and tactical nuclear weapons, also called non-strategic or battlefield. On the latter was Putin’s insinuation, according to a forced interpretation made from North America and Europe. Its impact capacity is less ( between 1 and 50 kilotons ) than the existing strategies, but it is still superior to those launched on Hiroshima and Nagasaki in 1945.

Russia has an estimated arsenal of 2 thousand units of this armament ( The United States has a lower arsenal ), which does not reflect some kind of specific warmongering vocation. It has been Russia’s way of compensating, in terms of deterrence, for US advantages in other more advanced weapons systems.

The Russian arsenal reached 2 a thousand units after a continuous decrease since the 1980s, when it had 13 thousand.

United States has its tactical nuclear weapons deployed in various NATO countries, which has been taken by Russia as a permanent sign of tension and escalation.

In total, the United States Air Force maintains 100 non-strategic nuclear bombs deployed between the Incirlik ( Turkey ) bases, Kleine Brogel ( Belgium ), Volkel ( Netherlands ), Büchel ( Germany ) and Aviano & Ghedi ( Italy ), as part of the displacement of US nuclear weapons to which the member countries of the Atlantic Alliance are obliged.

The state of communicational alarm around the nuclear issue reached a new peak with Putin’s statement, but it is necessary to affirm that such a shock has been manufactured through a particularized treatment of his speech.

In reality, the United States has been dangerously positioning the possibility of a nuclear weapon for a long time, while attacking diplomatic instruments established to control the proliferation and deployment of these weapons.

In April 2021, the United States Strategic Command, the institution that controls everything related to nuclear weapons, tweeted: “The spectrum of the current conflict is neither linear nor predictable. We must consider the possibility that a conflict leads to conditions that could very quickly lead an adversary to consider nuclear use as his least bad option”.

#USSTRATCOM Posture Statement Preview: The spectrum of conflict today is neither linear nor predictable. We must account for the possibility of conflict leading to conditions which could very quickly drive an adversary to consider nuclear use as their least bad option. pic.twitter.com/4Oe7xkl05L

This unfortunate tuit can be interpreted as a way to justify its use, frightening the world with the remote, and unproven, possibility that Washington’s adversaries use them.

In 2018, the United States presented its New Nuclear Posture and put Russia as its strategic competitor in this regard, incorporating a doctrinal and technical change aimed at modernizing the tactical nuclear weapons system into the review, with new transport and deployment channels, as part of the deterrence strategy against Russia.

In 2019, United States unilaterally withdrew from the Intermediate Scope Nuclear Forces Treaty ( INF, signed by Ronald Reagan and Mikhail Gorbachev in 1987, whose objective was to ban missiles with ranges between 500 and ) 1,500 kilometers. Washington’s retirement involved a new green light for a nuclear arms race.

The fact was of such gravity that, at the time, the UN Secretary General, António Guterres, asserted that the formal suspension of the treaty took away “an invaluable brake on nuclear war“.

For its part, the New START treaty, signed in 2010, was extended for five more years in 2021, in the face of Washington’s refusal to sit down with Moscow again to discuss an update of it.

The North American refusal also favors the arms race and the will to nuclear blackmail, while don’t seem interested in discussing the limits established more than a decade ago: 1 1,550 nuclear warheads and 700 ballistic systems is the cap established for both countries.

Although it is difficult, at this point, to think about how the situation around the nuclear issue will end definitively, it is possible to project the cost – benefit ( unfavorable ) if Russia decided to use these weapons.

Most important is the level of threat Russia has to perceive to use these weapons. And as already mentioned, it would have to be proportional and equivalent, that is, nuclear-type or through long-range missile attacks that put the real danger of Russian sovereignty and involve a 180-degree turn in the strategic game, which has not happened yet.

If it is used on Ukrainian territory or on incorporated regions, which would imply a doctrinal revision that authorizes it ( unlikely until now ), the range of impact of radiation and pollution on air, soil, water and food reversals would also affect Russia. A goal against that does not seem probable, since it would be to replicate a more terrible version of Chernobyl, according to some analysts.

An attack in this regard would imply an almost certain probability of direct, frontal intervention by NATO, although Ukraine’s accession to the Atlantic Alliance shines uphill to the moment. A change in this sense would substantially change the scenario, for which its use in territory covered by Article 5 of the Alliance would be ruled out.

However, even without Ukraine formally within the alliance, Russia would risk destructive attack with such action against his fleet in the Black Sea and other key ports in its navy, which have been instrumental in the deployment of UNWTO in southeastern Ukraine.

Although the cost – benefit ratio could indicate that Russia would lose more than it would gain from the use of tactical nuclear weapons, it cannot be ruled out, in view of the comments, that the United States seeks to push the conflict in Ukraine to the ultimate consequences and lead it to threaten Russia to the limit of what could be accepted.

Ultimately, and this is very important, humanity was saved from the nuclear holocaust during the Cold War to a large extent by a luck factor, as indicated by the Australian journalist, specialized in this subject, Caitlin Johnstone. For the author, annihilation was ensured in different episodes ( that of the missile crisis was the most dangerous ), until, at the last moment, sanity, stable channels of communication and the maturity of the leaders of the powers prevented the fatal outcome. These three premises or conditions cannot be taken for granted today in Washington.

However, as Johnstone explains, security around nuclear weapons depends on a delicate monitoring network, multi-level operating systems and fragile communication channels between military and political high command. A minimum confusion, a Biden flatch or an error of interpretation on both sides is enough for such a hellish and unwanted event to be consumed. That danger remains latent, never disappeared, and is the most fundamental of humanity at this moment.

Finally, that nuclear war seems improbable to us depends more on biases and mechanisms of psychological preservation than on reality itself. The bias of normality, of peace and calm, imposes on us a false belief that the possibility of annihilation is distant, even though that hypothesis has no real basis in view of the destructive capacity of these weapons and the fragile reasoning of those who handle them in Washington and NATO.

“For 70 years, nuclear weapons served as guarantor of peace. But unfortunately, we are now in a situation that can be characterized by the term strategic parasitism: everyone is so used to peace that they are convinced that there cannot be a great war. And this is not so. It can happen. This is the first. And second, now the probability of the use of nuclear weapons is greater than at any other time since the Caribbean crisis. But I really hope it doesn’t come to that. This is a direct path to hell”.