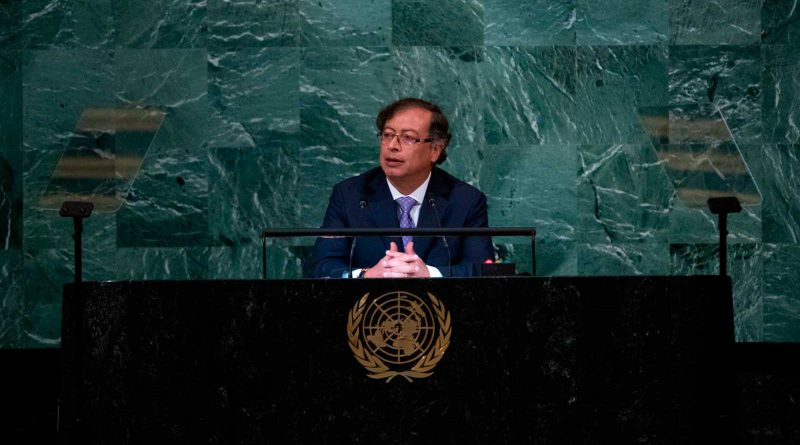 What follows is a transcription of the speech given by President of Colombia Gustavo Petro in General Debate of the 77th Session of the UN General Assembly on September 20, 2022.

I come from one of the three most beautiful countries on earth. There is an explosion of life there. Thousands of multicolored species from the seas to the skies to the land. I come from the land, yellow butterflies and magic. There, in the mountains and valleys of all the greens, not only do the abundant waters descend, but also the torrents of blood.

I come from a country of bloody beauty. My country is not only beautiful. There is also violence. How can you erode the biodiversity of life with the dances of death and horror? Who is to blame for breaking this enchantment with terror? Who or what is responsible for drowning life in the routine decisions of wealth and interests.

Who leads us to destruction as a nation and as a people? My country is beautiful because it has the Amazon jungle, the Chocó jungle, the waters, the Andes mountain ranges, and the oceans. There, in those jungles, planetary oxygen is released and atmospheric CO2 is absorbed. One of those plants that absorb CO2 among millions of species is one of the most persecuted on earth. They seek to destroy it. It is an Amazonian plant. It is the coca plant. The sacred plant of the Incas. Like at a crossroads. Paradoxical. The forest that is being saved is at the same time destroyed in order to destroy the coca plant. They release poisons and glyphosate en masse that run through the waters. They arrest their growers and imprison them for destroying or possessing the coca leaf.

1 million Latin Americans have been murdered, and 2 million Black people have been imprisoned in North America over this war on drugs. Destroy the plant that kills, they shout from the north. Destroy it. But the plant is just one more plant of the millions of species that appear.

The space of coca and of the peasants who cultivate it, because they have nothing else to cultivate, is demonized. You are only interested in throwing poisons into your jungles, taking our men to jail, and throwing our women into exclusion. You are not interested in the child’s education, but rather in killing their jungle and extracting the coal and oil from its entrails.

The sponge that absorbs poisons is seen as useless. They prefer to throw more poisons into the atmosphere. We serve them to excuse the emptiness and loneliness of society, which leads people to live in the midst of drug bubbles. We hide from the problems that they refuse to reform. It is better to declare war on the jungle, on its plants, on its people, while they let the forests burn, while hypocritically, they persecute the plants with poisons to hide the disasters of their own society.

Coal and oil must be protected, so its use can extinguish all, all humanity. These are the things of world power. Things of injustice. World power has become irrational. They see in the exuberance of the jungle, in its vitality, the lustful, the sinful, the guilty origin of the sadness of their societies, imbued in the deep unlimited convulsion of having, having, and consuming.

Bank accounts have become unlimited. The money of the most powerful of the earth will no longer even be able to be spent within centuries. The sadness of existence that it produces is artificial. Competition fills it with noise and drugs. Addiction to money, addiction to drugs.

The disease of loneliness is not cured with glyphosate in the jungles. Isn’t the jungle to blame? The culprit is their society, educated in endless consumption, in the stupid confusion between consumption and happiness that allows the pockets of power to be filled with money. The culprit of drug addiction is not the jungle, it is the irrationality of world power.

The war on drugs has lasted 40 years. If we don’t correct course, it will go on for another 40 years. The United States will see 2,800,000 young people die of overdose due to fentanyl that is not produced in Latin America. You will see millions of African-Americans being incarcerated in private prisons.

The black prisoner will become the business of jail companies. 1 million more Latin Americans will be murdered. They will fill our waters and our green fields with blood. We will see the dream of democracy die. Both in our America and in Anglo-Saxon America. Democracy will die where it was born. In the great Western European Athens. For hiding the truth. We will see the death of our jungles and democracies.

The war on drugs has failed. The fight against the climate crisis has failed. The fatal consumption of soft drugs has increased, and people have gone to harder ones. There has been genocide on my continent, and in my country they have sentenced millions of people to prison to hide their own social responsibility. They have blamed the jungle, its plants have filled speeches and policies with unreason.

I demand, from here, from my wounded Latin America. End the irrational war on drugs. Reducing drug use does not require wars with guns. It needs us all to build a better society. A more supportive, more affectionate society, where the intensity of life saves us from addictions and new slaveries.

Do you want fewer drugs? Then think of less profit and more love. Think of a rational exercise of power. Do not touch the beauty of my country with your poisons. Help, without hypocrisy, to save the Amazon jungle, to save the life of humanity on this planet. You gathered the scientists, and they spoke with reason, with mathematics and climatological models. They said that the end of the human species is near, that our time is no longer millennia, not even centuries.

Science sounded the alarm, but we stopped listening to it. War served as an excuse for not taking the necessary measures. When the actions were most needed when the speeches no longer served a purpose when it was essential to deposit the money required to save humanity when it was necessary to get away as soon as possible from coal and oil. They invented a war.

And another and another. They invaded Ukraine, but also Iraq and Libya, and Syria. They invaded in the name of oil and gas. They discovered, in the 21st century, the worst of their addictions, addiction to money and oil. Wars have served as an excuse for not acting against the climate crisis. The wars have shown them how dependent they are on what will end the human species.

The people are filled with hunger and thirst and migrate by millions to the north, towards where the water is. So you lock them up, build walls, deploy machine guns, shoot at them, drive them out as if they weren’t human beings. Fivefold the mentality of those who politically created the gas chambers and concentration camps reproduced on a planetary scale.

1933. The great triumph of the assault on reason. Do they not see that the solution to the great exodus unleashed on their countries of the North, is for the return of water filling our rivers, for our fields to be filled with nutrients? The climate disaster fills us with viruses that swarm and devastate, but you do business with medicines and turn vaccines into commodities.

They say that the market will save us from what the market itself has created. The Frankenstein of humanity lies in letting the market and greed act without planning, surrendering the brain and reason, and kneeling human rationality to the altar of greed. Why do we need war to save the human species? What use is NATO or empires, if what is coming is the end of intelligent life?

Behind the addiction to oil and coal is the true addiction of this phase of human history. Addiction to irrational power, profit, and money. Here is the huge deadly machinery that can extinguish humanity. I propose to you, as president of one of the most beautiful countries on earth, and one of the most bloodstained and violent: End the war on drugs and all wars and allow our people to live in peace.

I summon all of Latin America for this purpose. I summon the voice of Latin America to unite to defeat the irrationality that tortures our bodies. I call on you to save the Amazon rainforest in its entirety. If they do not have the capacity to finance the forest revitalization fund, if it is easier to allocate money to arms than it is to life, then reduce our external debt in order to free up our own budgets and therefore carry out the task of saving humanity and life on this planet.

If we are not at peace with the planet, there will be no peace among nations. Without justice, there is no social peace. Thank you.