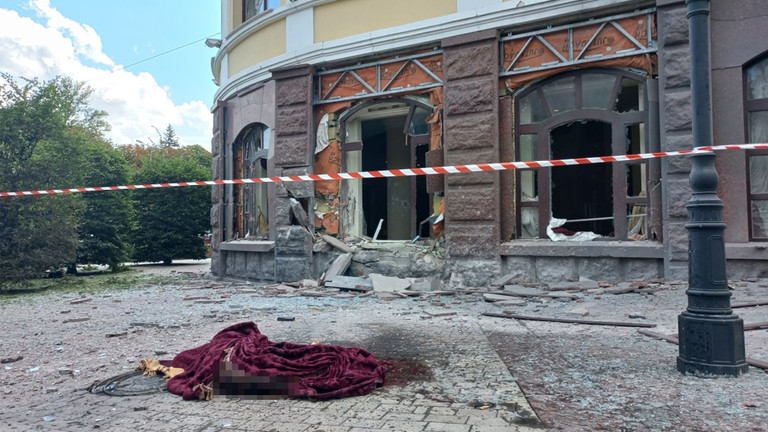 Another attack from Kiev has hit central Donetsk, targeting a funeral and a hotel where numerous reporters stay and work

At 10:13 am today (Thursday), Ukraine began shelling central Donetsk. There were five powerful blasts in the space of ten minutes. The last explosion blew out my hotel’s ground-floor glass, including a sitting room – where journalists often congregate before and after going out to do field reporting – and the lobby. About one minute earlier, I had passed through the latter. A cameraman’s assistant who was there at the time of that fifth explosion suffered a concussion from the force of the blast.

During Ukraine's bombings of central Donetsk a couple hours ago. At least five in first few minutes, ~10:20 am. Some time later, another maybe 4 explosions. Dead woman's body blurred to avoid Twitter censorship. pic.twitter.com/IfeItc6yLj

A woman walking outside the building was killed, as were at least four others, including a child. Donetsk Telegram channels are filled with videos locals have taken, of the dead, the injured and the damage, and of grief-stricken people. One such hard-to-watch Telegram post (warning: graphic footage) features a man in shock at the gruesome sight of the bodies of his murdered wife and grandchild on a street two blocks from the hotel.

"Screams, grief, real hell in Donetsk – a man found the torn bodies of his wife and granddaughter on Pushkin Boulevard"https://t.co/eK79eyd8S5

The total number of injured is still not known, as I write. First estimates placed the number at at least ten, among them two ambulance workers: a paramedic and a doctor.

Reading the news, you have the luxury of graphic image warnings and the choice not to look at the pictures and videos of the carnage that occurred today, as well as over the past eight years of Ukraine’s war on Donbass. The people here on the ground don’t get a warning, or a choice as to whether they will see the mutilated remains of a loved-one or stranger. As uncomfortable as it is to see such footage, it does need to be shown if the world is to know the truth of what’s going on in Donbass, to give voice to the locals, killed and terrorized by Ukrainian forces as Western corporate media looks elsewhere or covers up these crimes.

Chronology of a bomb strike

When the shelling started, I was in my room editing footage from the previous day – from the aftermath of another shelling of a Donetsk district. You wouldn’t know it from most Western media coverage but explosions are so common here that I didn’t think much of the blast other than it was louder than usual and the car alarms were going off.

Seven minutes later, another explosion, much louder and much closer. From the window, smoke could be seen rising to the north, probably 200 meters away. This would have been right near the Opera House, where the funeral ceremony for Donetsk People’s Republic (DPR) Colonel Olga Kachura, killed yesterday, was commencing.

A minute later, another loud blast sent me running from the room, which faced the direction of incoming artillery. Luckily, the only damage ended up being a broken window.

Downstairs, journalists who had been in the hotel and others who had been outside ready to go out reporting, took shelter in the hallway for the time being, ready to run to the basement if things escalated.

One told me he had been preparing to go film and was about 10 meters away from where the last shell struck. “I believe they were trying to target the funeral. And journalists also,” he said. He also said there was a woman outside who had lost a leg, and that she was probably dead by now.

One could assume that Kiev’s forces’ only intended target was the funeral service for Colonel Kachura, aiming perhaps to send a message to the DPR military and the civilians who support it. While that would be egregious by itself, it is likely that a hotel housing journalists was not just ‘collateral damage,’ either.

Kiev’s forces know a lot of journalists stay at this hotel for its central location and strong wifi. Many frequently do their live reports from outside the hotel. And those staying here, as well as in other central Donetsk neighborhoods, have been loudly reporting on Ukraine’s showering of Donetsk with the insidious, internationally-prohibited ‘butterfly’ anti-personnel mines of late – the latest, until today, in the list of Kiev’s war crimes. These explosives are designed to rip off feet and legs, and Ukraine has repeatedly fired rockets containing them, intentionally dropping them on civilian areas in Donetsk and other Donbass cities.

After the explosions rang out in central Donetsk today, Emergency Services arrived at the scene and, following a period of calm, journalists went out to document the damage and the dead. The woman I’d been told about lay in a pool of blood, covered with what appeared to be a curtain from one of the blown-out windows.

The calm didn’t last long. Ukraine soon resumed shelling, and journalists outside ran back inside as we received another four attacks. “It’s like a common thing, they shoot one place and shoot it again. So we’re in the middle of that process right now,” a Serbian guy near me said.  The chief of a local Emergency Services headquarters told me Kiev also makes triple strikes, not only double.

It is said that Ukraine used NATO-standard 155mm caliber weapons in today’s attack. If that is true, this is another instance of Ukraine using Western-supplied weapons to slaughter and maim civilians in the Donetsk and Lugansk People’s Republics.

If by bombing a hotel full of journalists Kiev wanted to intimidate them away from reporting on Ukraine’s war crimes, it won’t work. Most journalists reporting from on the ground here do so because, unlike the crocodile tears of the West for conflicts they create, we actually care about the lives of people here.

Who Killed the POWs at Yelenovka? All Signs on the Ground Point to a Ukrainian Attack