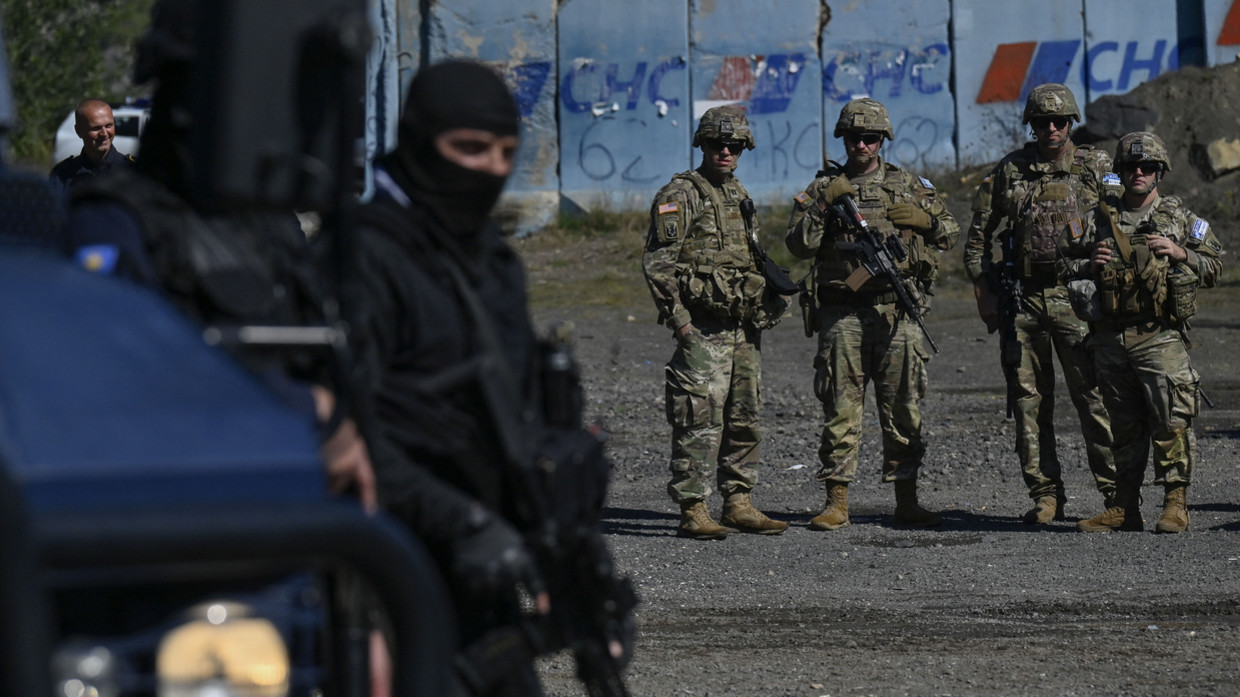 In addition to the conflict in Ukraine, Europe is now faced with the prospect of renewed conflict in Kosovo, Serbia’s breakaway province (officially named Kosovo and Metohija according to the Serbian constitution). Kosovo’s unilateral secession was recognized by the main Western powers in 2008. This came nine years after NATO’s attack on Serbia and the Federal Republic of Yugoslavia, after which NATO forces occupied the province and helped install an ethnic Albanian-led government dominated by former members of the Kosovo Liberation Army terrorist organization.

The current crisis was triggered by Kosovo’s ethnic Albanian Prime Minister, Albin Kurti, who initially wanted to force the majority Serb population in the north of the region to accept Kosovan license plates and ID papers starting from August 1, and to ban entry to the province or issue temporary papers to travelers with Serbian-issued plates and documents.

Kurti attempted a similar stunt in September 2021, triggering a crisis where local Serbs in northern Kosovo organized roadblocks and Kosovo police reportedly beat up and intimidated Serb civilians, while the authorities in Belgrade put the Serbian military on high alert and ordered overflights by fighter planes over the administrative border between Serbia proper and Kosovo. The EU eventually brokered a temporary agreement, pending a final deal that was supposed to have been reached by April 2022, under EU auspices. However, nothing has come of that.

From Kosovo to Ukraine, it seems there’s a pattern regarding agreements in which Western powers have a hand. Since the start of this year’s special military operation in Ukraine, Russian officials have repeated time and again that the West had never pressed Kiev to fulfill its part of the 2015 Minsk 2 peace agreement, intended to end Kiev’s standoff with the Donbass republics. Recently, former Ukrainian president Pyotr Poroshenko openly admitted that Ukraine never intended to fulfill the agreement but was merely buying time until it could build up an army capable of overrunning Donbass.

The situation with Kosovo is not much different. The EU brokered an agreement between Pristina and Belgrade in April 2013, the so-called Brussels Agreement, by which Serbia was supposed to dismantle its “parallel” police and judicial structures in Kosovo and convince the Kosovo Serbs to accept integration into the Kosovo police and legal system, without recognizing the territory’s independence. And the Belgrade authorities did this, despite a large public outcry over the move.

However, there was a second part to the agreement, by which Pristina was obligated to form an Association of Serb Municipalities, with substantial local powers and ties to Serbia proper. The Albanian part of the Brussels Agreement has not been fulfilled to the present day. Or, as Serbian President Aleksandar Vucic noted on July 31, that 3,390 days have passed since the Brussels Agreement was signed, and still no sign of the Association.

There’s an additional ingredient to the Kosovo mix, thanks to the Ukraine conflict. Namely, the Serbs – both in Serbia and in Bosnia and Herzegovina – stand practically alone among European peoples in refusing to join Western sanctions against Russia, and in consistently demonstrating open support for Russia’s special military operation in Ukraine. As a result, the government in Belgrade has been under constant, increasing pressure by the main Western capitals, as well as the EU and NATO, to change its policy and join the West’s collective economic suicide.

Since Belgrade has proven to be a tough nut for the West to diplomatically crack when it comes to opposing Russia, it’s not at all far-fetched to imagine that the Kosovo Albanians just might be seen by the West as a useful tool by which to additionally turn the screws on Belgrade. In the same cynical way in which the unfortunate Ukrainians are being used to pressure and weaken Russia.

The coming days and weeks will certainly tell us a great deal. The temporary reprieve brought on by the Kosovo authorities’ one-month postponement of their ban on Serbian license plates and identification documents until September 1 may seem encouraging. However, it should always be borne in mind that the West has all the tools necessary to pressure Pristina to fulfill the Brussels Agreement and generally, to just behave. Kosovo is totally dependent on a steady flow of Western financial infusions and NATO’s security support.

The Serbian president has publicly stated that Serbia is not interested in a renewed conflict but won’t allow its people to be harmed and abused by Kosovo’s security apparatus. If the main Western powers don’t rein in Kurti and, instead of pressing him to fulfill previously signed agreements, allow him to use force and make his announced unilateral moves come September, or even earlier, it can mean at least a couple of things: 1) that the threat of new violence in Kosovo was used by the West to extract some more concessions from Belgrade, perhaps behind the scenes, having to do with the formation of a new Serbian government, or 2) that the West’s beleaguered political elites want and, perhaps, desperately need the breakout of another conflict in Europe. Or perhaps even both of these.

The only thing that is, unfortunately, difficult to imagine, is the US and the EU actually doing something to fundamentally contribute to a peaceful resolution to this crisis. The last days of July saw a sudden upsurge in violence and escalating tensions between Serbia and the narco-terrorist neocolonial entity currently occupying Serbia’s southern province of Kosovo and Metohia. The problem arose due to the Albanian narco-terrorist entity’s intention to ban the usage of Serbian government-issued documents in the southern Serbian province under NATO occupation. The decision to escalate tensions followed less than a week after the illegal narco-terrorist government visited the United States and met US Secretary of State Anthony Blinken.

After a very tense weekend, which according to some (as of this writing) unconfirmed reports included sporadic gunfire, the situation currently seems to be relatively calm, but remains volatile nonetheless. Throughout the previous night, tensions remained high, after several hours of sirens wailing, as well as roadblocks and the closing of main administrative border crossings. The decision of the narco-terrorist puppet government to start implementing the policy of banning the registration of vehicles with Serbian plates, as well as the ban on issuing Serbian identity cards provoked a reaction of the Serbian community, which has been under tremendous pressure for decades.

The narco-terrorist puppet government sent its henchmen to enforce the illegal ban, prompting a tough response from the Serbian community, which, although relatively small, is united and well-organized. The barricades that were set up by the Serbs last night were still present in the morning. Heavy machinery was placed in the vicinity, including trucks loaded with gravel. Most local businesses, catering establishments, cafes, pubs, pastry shops, fast food restaurants and bakeries are closed, although some food and convenience stores remain open to ensure the locals are provided with basic necessities.

For its part, Serbia is attempting to defuse the situation, although this approach is questionable, as it seems the NATO-backed narco-terrorist government sees such moves as a weakness. According to Belgrade media, Serbian President Alexander Vucic left the presidental residence last night and spent several hours consulting with the leadership of the Serbian military. The details of the conversation remain classified, although there are reports that the Serbian military units were put on high alert and are currently maintaining high combat readiness in case that the Albanian terrorist forces attempt any sort of violence against the Serbian community.

The narco-terrorist government Minister of Foreign Affairs Donika Gërvalla-Schwarz said this morning that “facts remain facts”, and that, according to her, the government in Pristina agreed with the proposal of the USA, in accordance with the EU, to “pause” the implementation of the decision until September 1, but only if “the barricades are removed by August 1”.

“Reciprocity will remain a reality. Kosovo has not ‘postponed’ anything. The regulation on identity cards has been active since midnight,” Gërvalla-Schwarz said in a statement given a few hours after midnight. However, the word “postponement” was used by the narco-terrorist government itself in its official announcement.

The NATO-led Kosovo Force, otherwise known by the acronym KFOR, stated it will be “ensuring the safety of all citizens”, although such statements can hardly be seen as genuine, given their almost regular inaction as Serbs are being attacked on a daily basis. KFOR promised it will send helicopters to fly over the north of the occupied Serbian province, starting from this morning. KFOR announced last night that it is ready to intervene if necessary, including in the north and implement its mandate based on UN Security Council Resolution 1244.

However, the Serbian community remains extremely sceptical after most Serbs were forced out of the province in 1999 after NATO forces attacked Serbia. NATO-backed ethnic Albanian terrorists with links to Al-Qaeda killed thousands of Serbian civilians, including for organ harvesting. NATO doesn’t only turn a blind eye to decades of brutal oppression of all non-Albanian communities in the southern Serbian province, but is even arming and training the narco-terrorist government.

The so-called “Kosovo”, under the presidency of Albin Kurti, whose platform is the unification of a supposed “ethnic Albania”, is usually portrayed as a “democratic and progressive country which loves, respects and implements fair laws and constitutionalism, peace and security, for all citizens without distinction and for their entire common country.” The reality, however, is the complete opposite. The so-called “ethnic Albania”, also known as “Greater Albania” is being implemented through ethnic cleansing of all non-Albanian communities, particularly the autochthonous Serbs. With the US rapidly losing its global hegemony, the narco-terrorists currently occupying the Serbian province of Kosovo and Metohia feel increasingly nervous as their dream of “ethnic Albania” seems to be shattered.