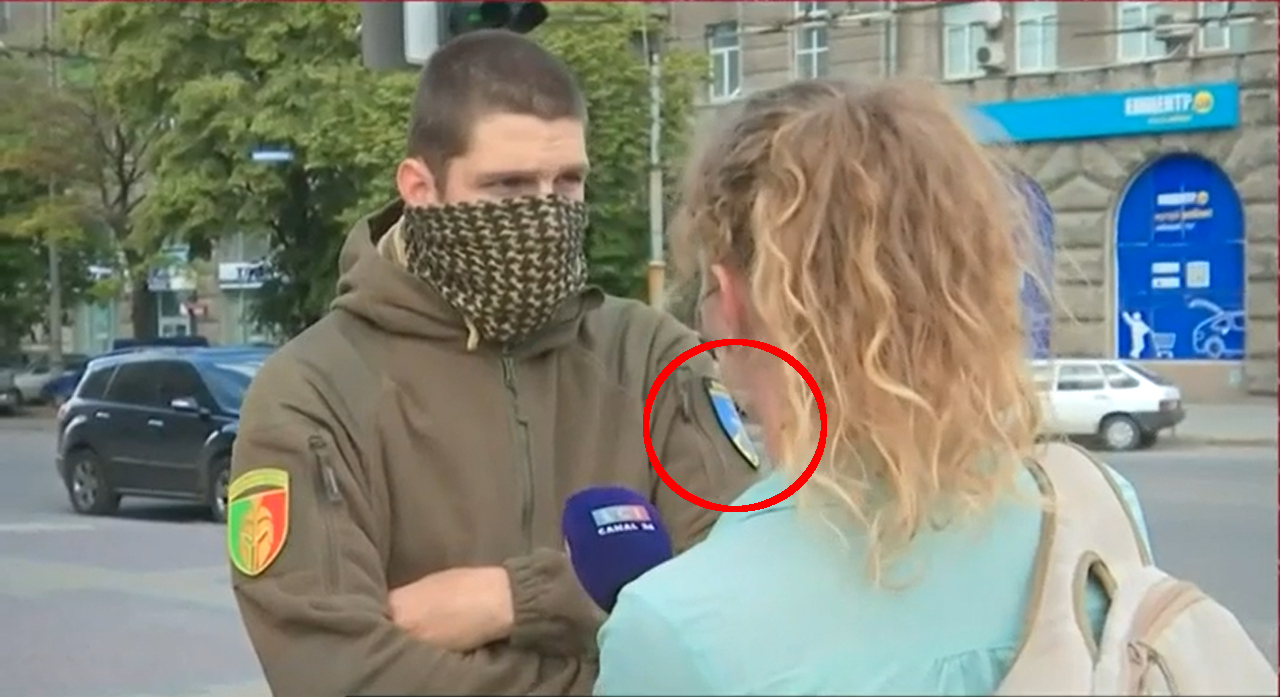 On 24 June 2022, LCI published an interview with a French, Karel, who has signed up as a “volunteer” (a real mercenary) with the International Ukrainian Legion. Small problem: this French who fights for Ukraine is a neo-Nazi, already arrested in France and probably on the S list.

In 2014,« Elle » magazine interviewed a young Ukrainian woman, who later turned out to be a neo-Nazi. “Elle” will apologise for promoting a neo-Nazi in this way, saying that there was no indication of this when they did the interview.

Is LCI going to give us the same excuse, when it was not difficult to trace back several of the information I found with the full name of the clown? Indeed, this Frenchman presented by LCI as a simple volunteer wanting to “defend Europe” is in reality called Karel Cherel-Salzburg, and he is a neo-Nazi mercenary who has already been arrested in France for acts of violence.

In 2019,  he was arrested for the attack on a bar in Nantes, along with two other men, all of them far-right. The attack was aimed at antifas, and one of the bar’s customers was seriously injured by a baton blow to the head. Ouest-France reports that of the three, two are on the S list for belonging to a far-right group.

And although Karel Cherel-Salzburg claimed at the time not to be far right, his social networking pages tell a different story.

Let’s start with his VK account   (the age and name match), which reveals photos that leave little doubt about Karel’s political orientation. Among the latest photos is a clear poster of the  Right Wing Resistance organisation, whose links to Ukrainian neo-Nazis I had pointed out after the Christchurch bombing. The symbolism of the organisation is all the more Nazi: wolfsangel, numbers 14 and 88, totenkopf, etc. And the other images speak for themselves, I think. Now little Karel is going to have a hard time trying to convince us that he is not far-right… 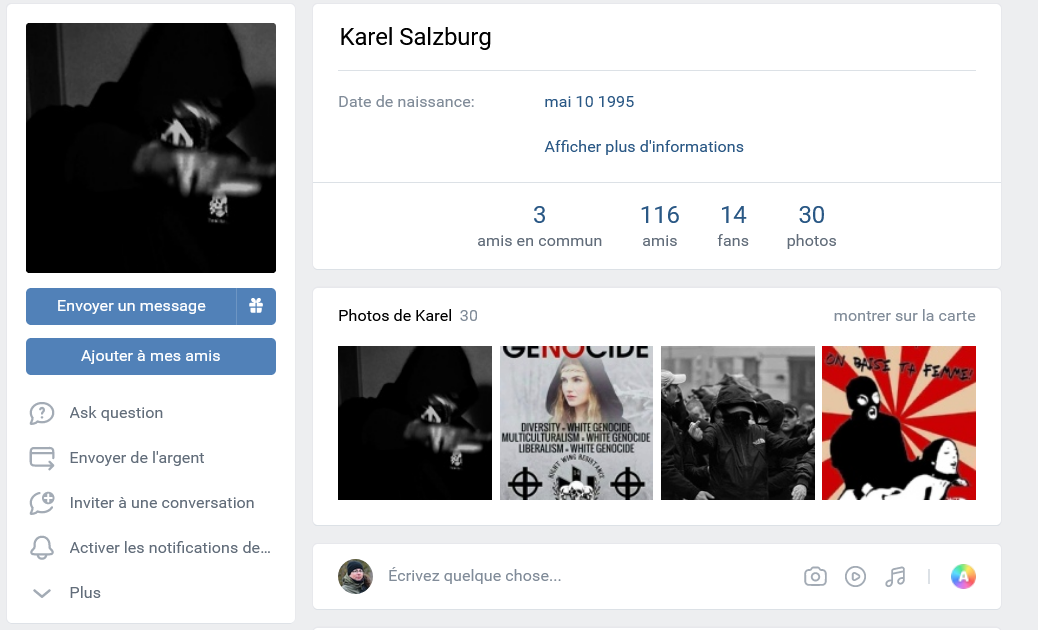 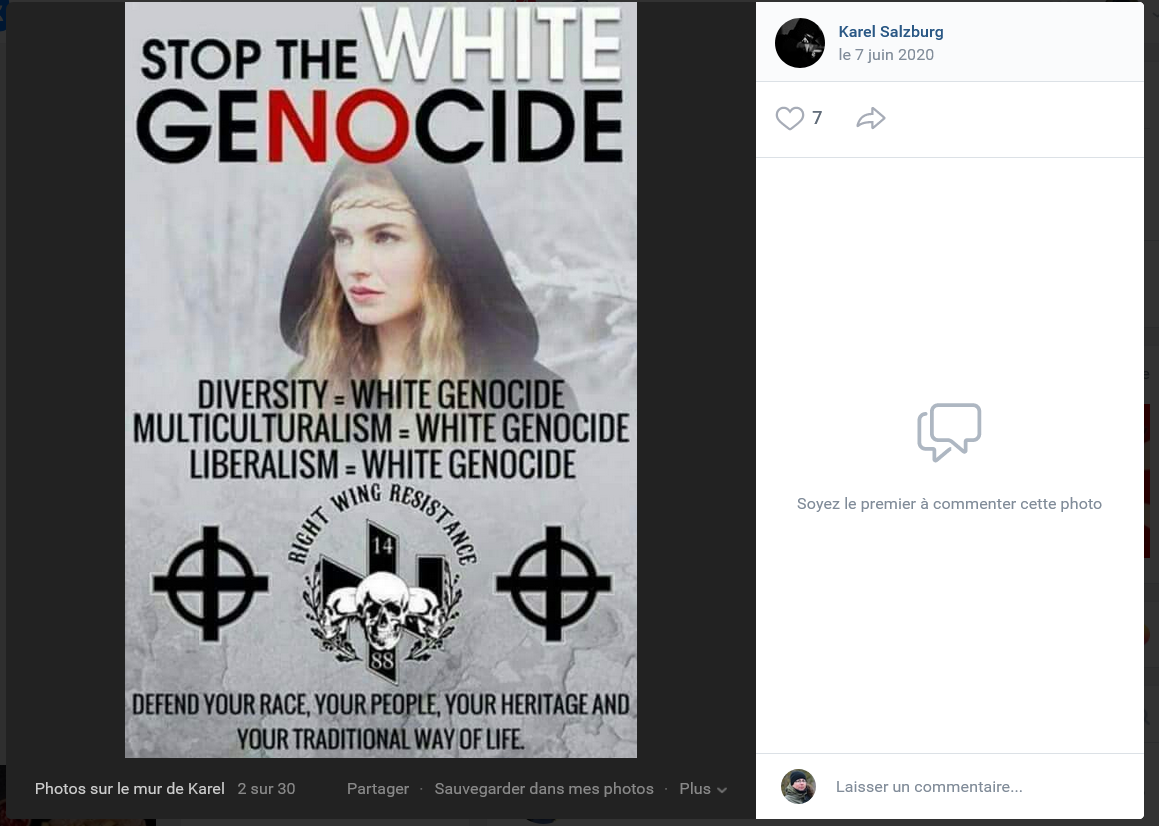 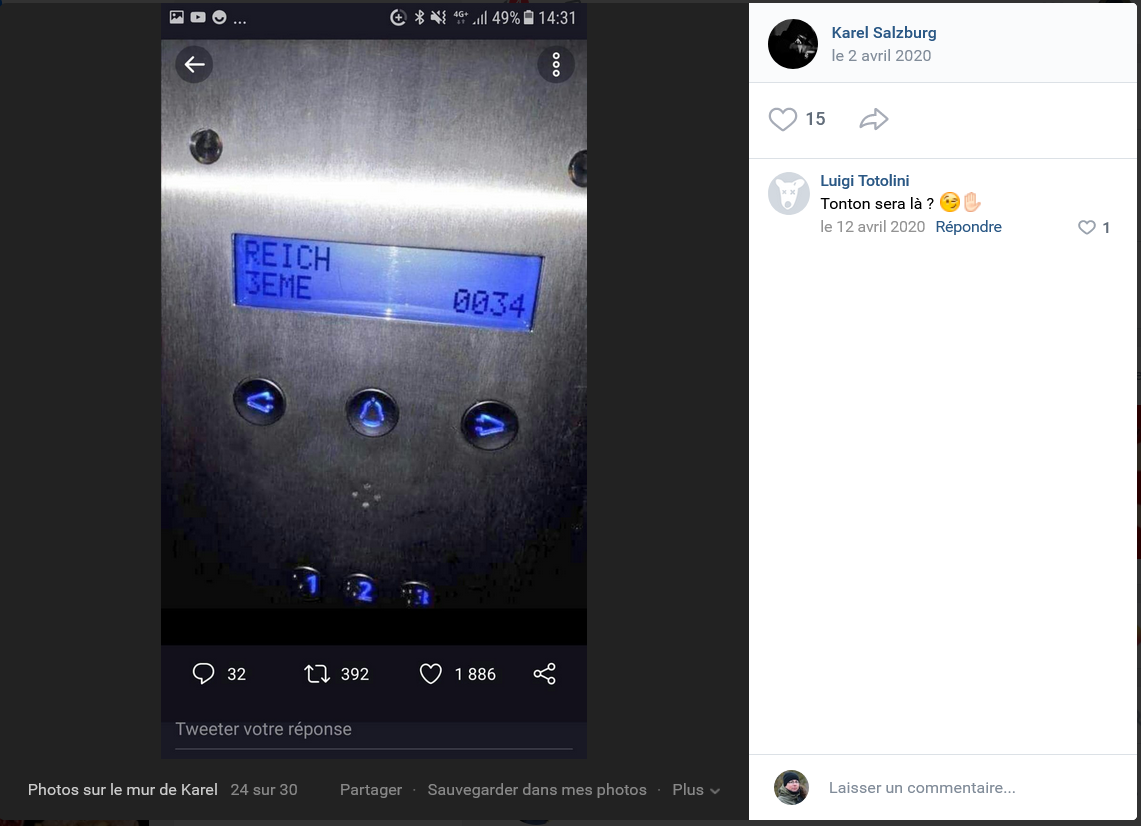 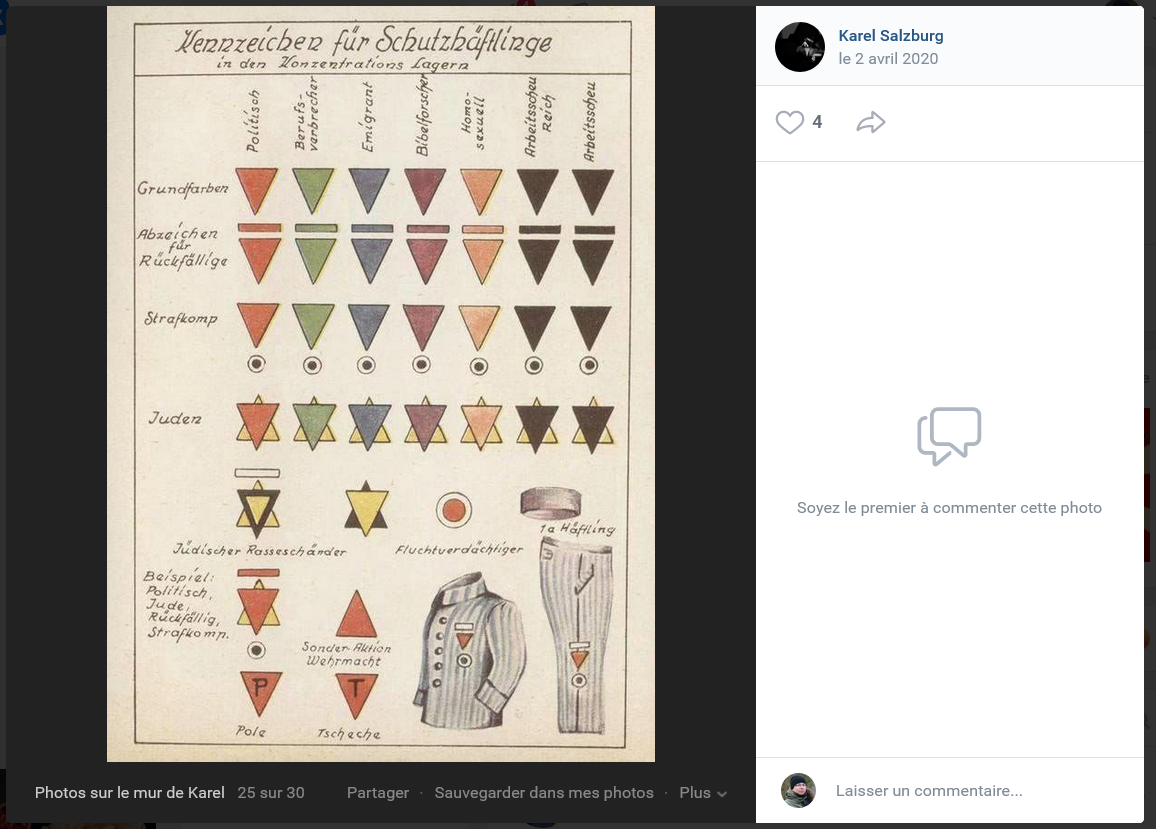 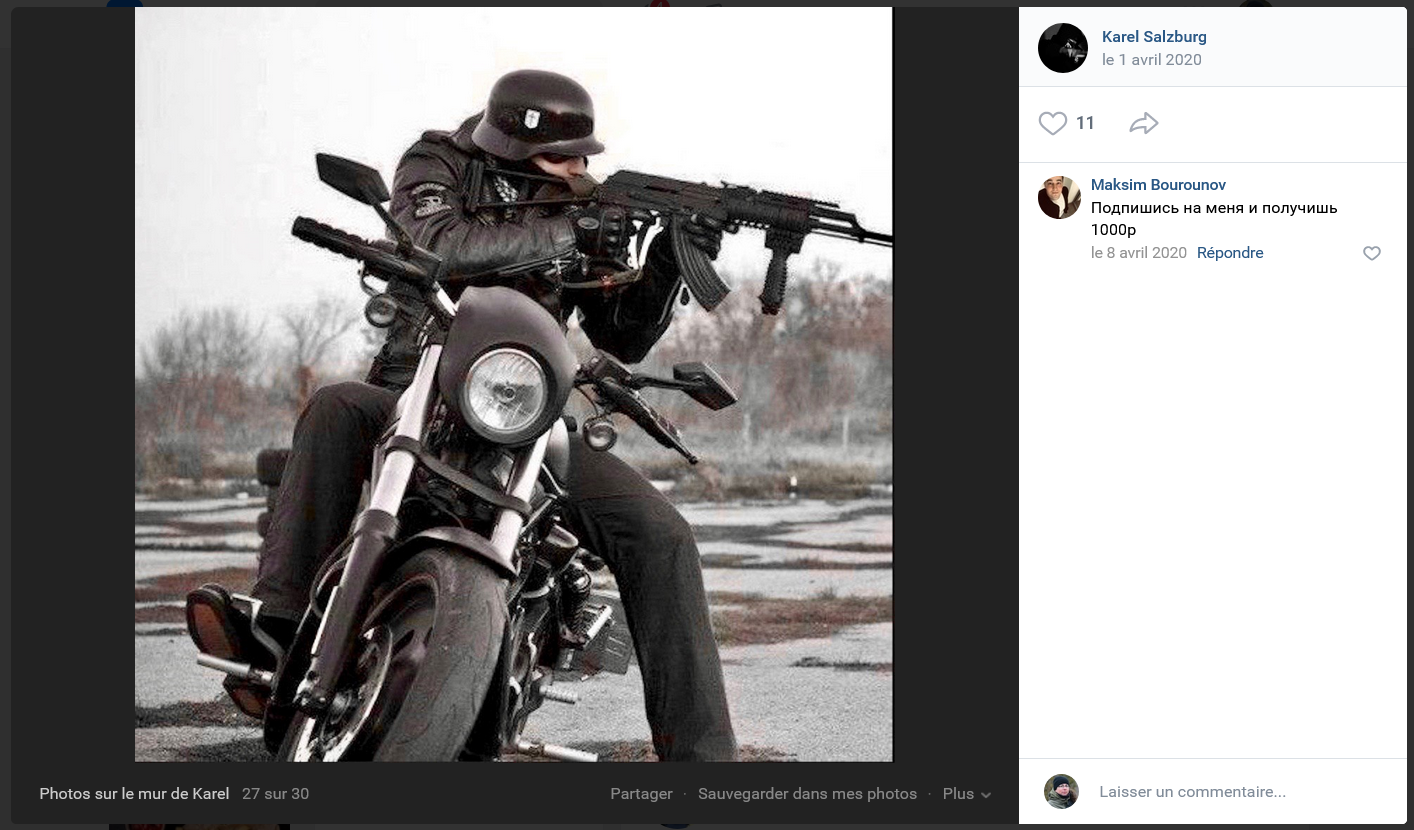 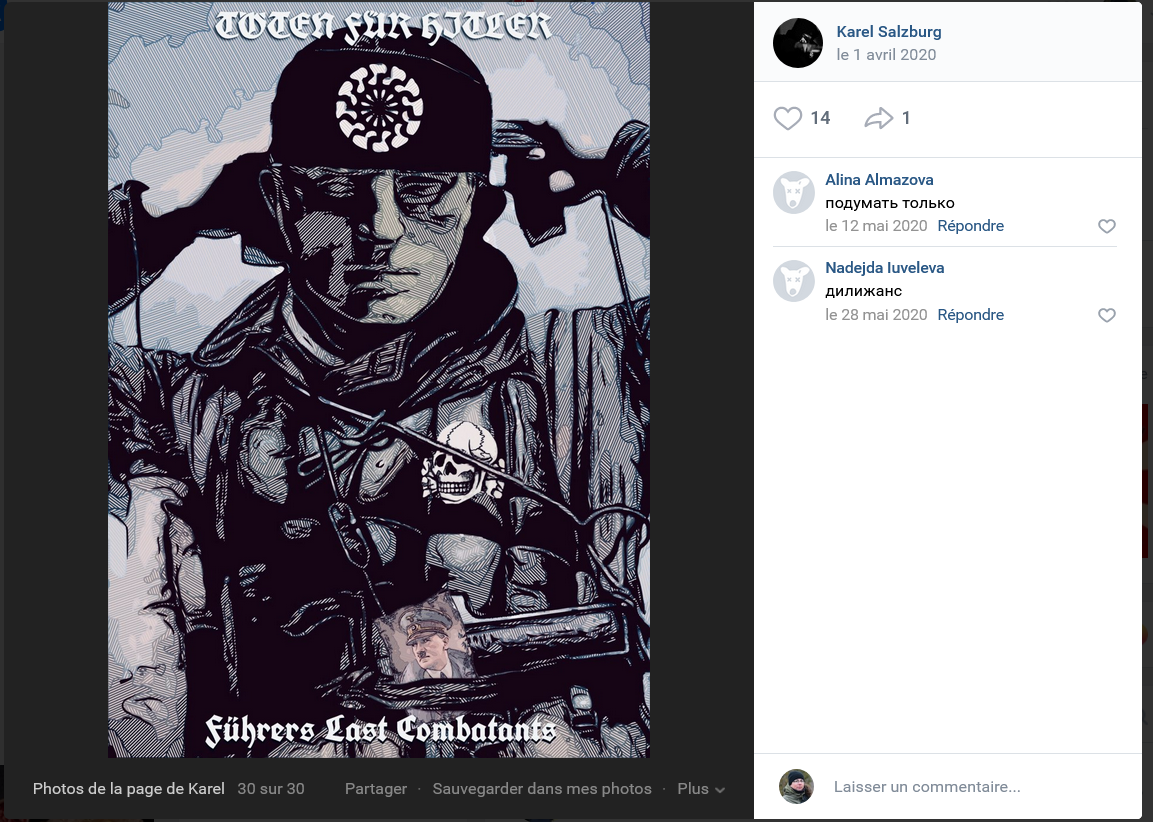 But the best part is his Instagram. The name of the account alone is a poem: frenchbanderiste (which means banderist – follower of Stepan Bandera, Ukrainian collaborator of the Nazis during the Second World War – French). There are videos and photos where you can see the whole face of this sad man, and hear his voice (which confirms that it is him) and more evidence that this French fighter in Ukraine is a neo-Nazi! 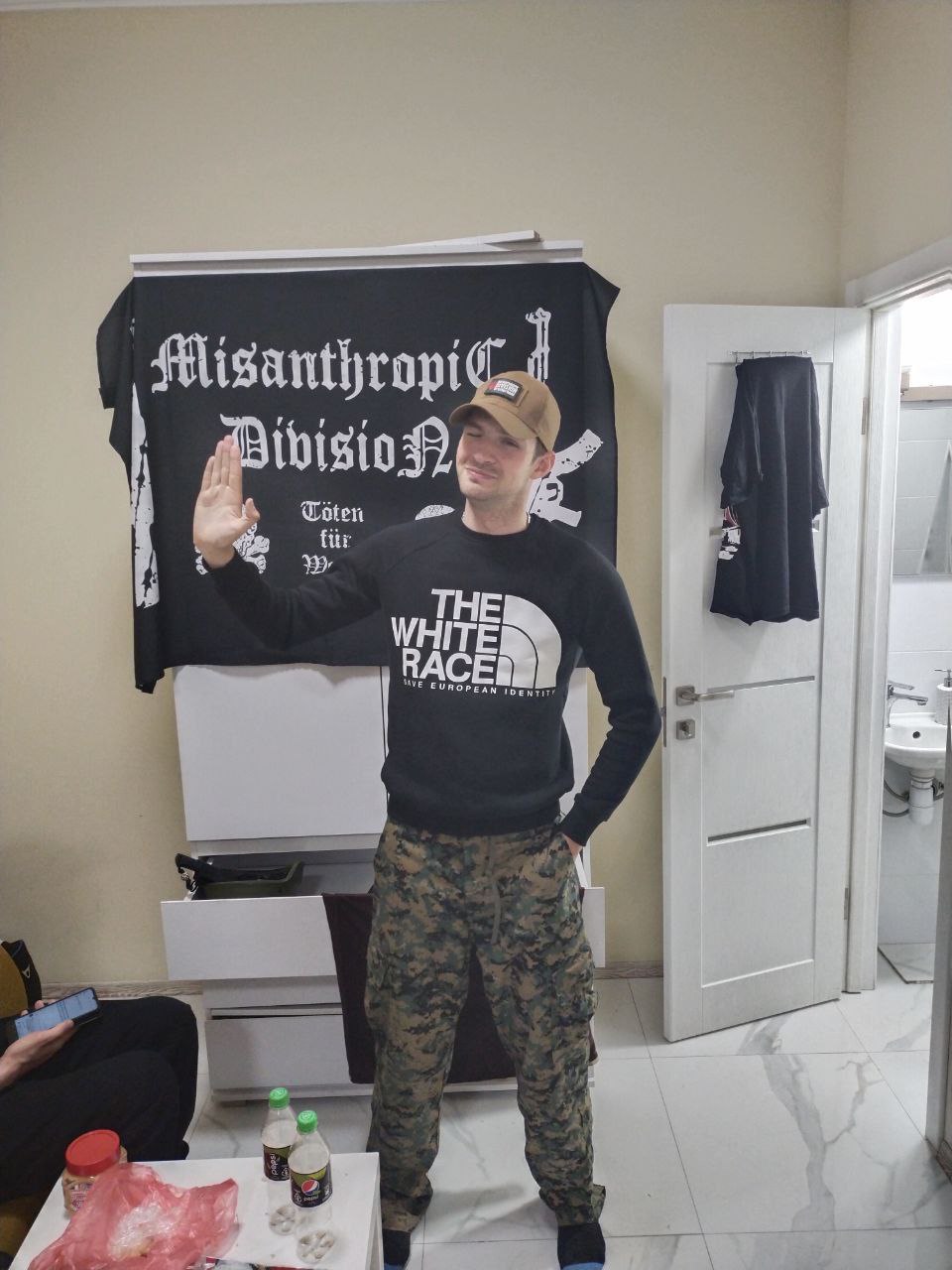 Among the photos, one shows the French fighter giving a Hitler-like Nazi salute in a jumper displaying “the white race” on his chest, and posing with a flag of the Misanthropic Division, a Ukrainian neo-Nazi unit! 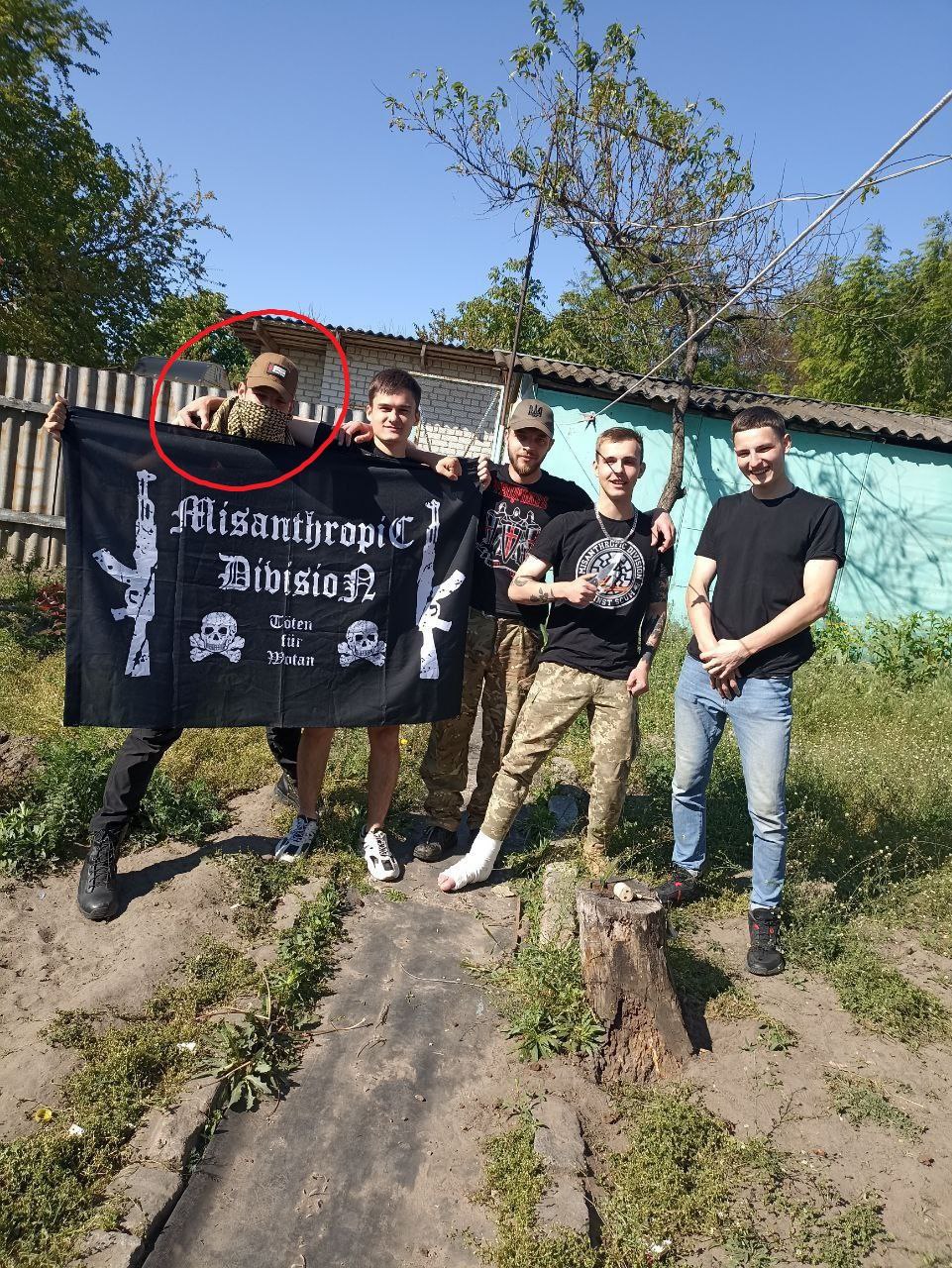 To end on a high note, at one point in the report, the rafters of the French neo-Nazi unit are partially visible: the Vovkodav battalion. 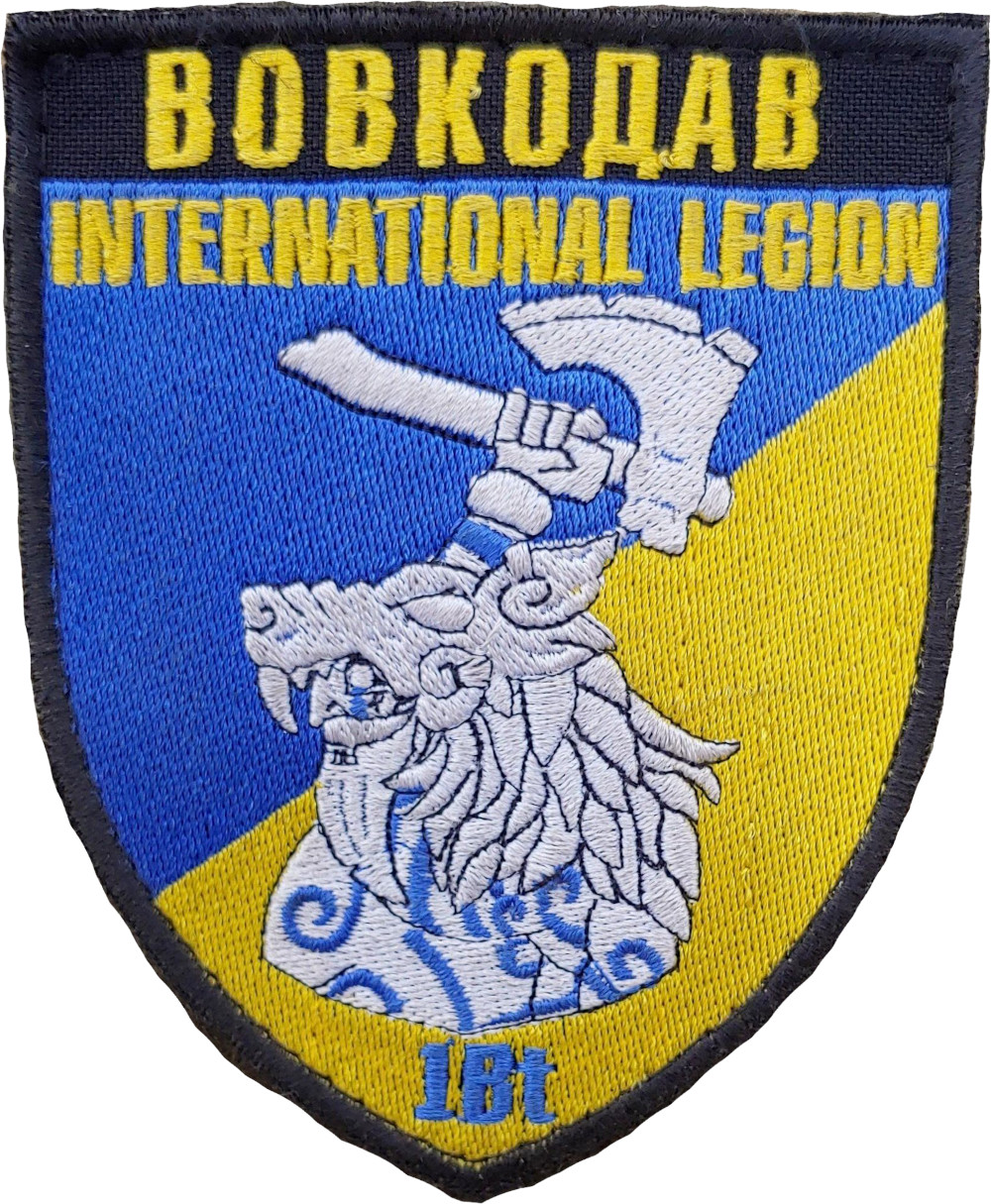 The chevron of this battalion of the Ukrainian International Legion represents the wolf Fenrir (a giant wolf from Norse mythology) with the hand of the god Tyr in its mouth (a hand that the god had placed there as a token while the others tied up the huge wolf with a magical bond making him believe that he was safe, and that Tyr loses when Fenrir understands that he has been fooled and chained up) For information, Fenrir is one of the major actors of the camp of chaos during the Ragnarök (the equivalent of the apocalypse in Norse mythology to simplify). Quite a program…

With all this found in just a few hours, I would like my confreres at LCI to explain to me how they could give the floor to a French neo-Nazi, presenting him as a simple “volunteer” who came to fight in Ukraine to defend Europe? Wasn’t what happened with “Elle” magazine in 2014 enough for you? Didn’t Claire Cambier (the journalist who did the interview) learn at Sciences Po Lille and the French Press Institute to do the usual checks before an interview? Or did she know this and hope that by hiding the surname and face of this French neo-Nazi the truth would not be revealed?

Anyway, this interview is another monumental failure that shows what the French media is worth. If the Russians ever want to know where this French neo-Nazi mercenary is, his unit is stationed near Kharkov…