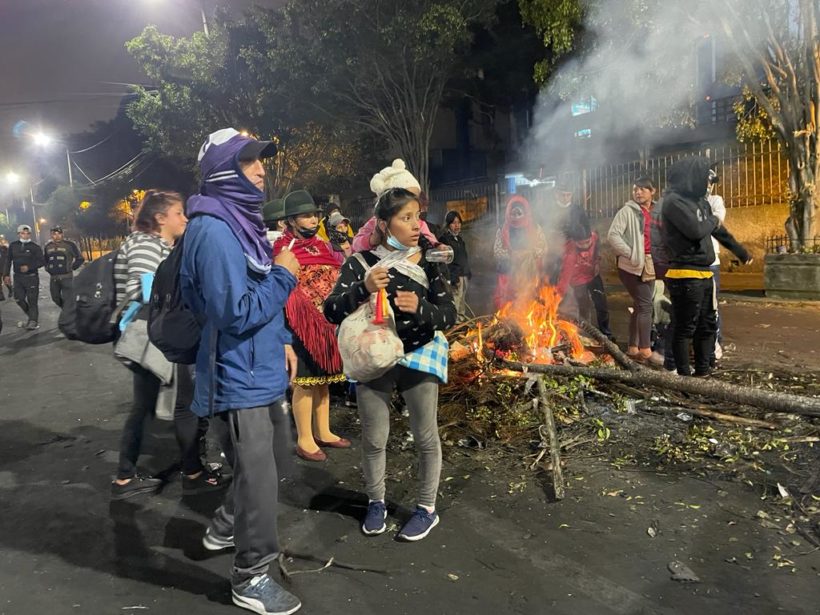 “Stop the massacre” was the cry that ran through tears, pain and indignation on the twelfth day of the #ParoNacional2022.

“We have had a very difficult day”; “it has been a very strong day”. “We denounce to the world… the wounded, the dead, the imprisoned. Let them know about these inhuman actions. We call for peace, for harmony, we cannot generate civil war between brothers”. These were the words of the leaders of the #ParoNacional2022 around midnight, in their press conference to the country: Confederation of Indigenous Nationalities of Ecuador (CONAIE), National Federation of Peasant, Indigenous and Black Organisations of Ecuador (FENOCIN) and Organisation of Evangelical Indigenous People in Ecuador (FEINE).

Numerous families and delegations of Peoples, Nationalities and social organisations joyfully and confidently fill the Ágora of the Casa de las Culturas, recovered, after the police occupation. They arrive in a “massive and powerful” way to participate in the Assembly of the Peoples, which is installed on the 12th day of #National strike Conaie Communication – Home | Facebook: “we recognize our FORCE, we recognize that we are going hungry, but we will not lose the horizon, justice, peace”, is heard in this large and symbolic space, after the opening ancestral spiritual ceremony. Indignant voices point to other possible models of democracy and participation, based on the sustainability of life.

“The peoples and nationalities and their organisations are waiting for responses to the social and environmental injustices generated by the neoliberal model established by multilateral organisations and applied as a formula by the governments in power in Ecuador, making life more expensive and precarious, the absence of fair prices for products grown in rural areas, the absence of state regulation of the high interest rates on loans from cooperatives and banks, leading to the abandonment of the countryside and massive migration out of the country”, (Statement by the Anthropology Network of Ecuador).

“The background is undoubtedly the desperation of the impoverished majorities of the country. This government, made up of businessmen and white-mestizo elites living in exclusive neighbourhoods and basically socialising among privileged groups, has not reacted to the popular frustration after two years of economic and social catastrophe caused by the pandemic” (Pablo Ospina. Latinoaméroca21, Published in Pressenza 24.06.22).

On national radio and television, President Lasso takes the stage, abandoning the conciliatory gesture; he lashes out at the President of CONAIE, accusing him of “deceiving his base and of wanting to usurp the legally constituted government”, and declares that “The National Police and the Armed Forces will act with the necessary means to defend, through the progressive use of force, public order and democracy”. https://www.primicias.ec/noticias/politica/confrontacion-crece-posibilidad-dialogo-lejana-ecuador/ .

The government has declared war, underpinned by a narrative of “them and us”, making it clear who it governs for; us “the citizens”, them the “vandals and criminals”. It has opted for a new step in its military strategy as the only way out: the use of force to “repress” the population, according to an immediate announcement by the Minister of Government.

The Government of the “Encuentro”, as its slogan says, has lost the capacity to listen and dialogue; CONAIE has been asking for dialogue for a year, since last June, “twice we have attended the dialogue…but you have not responded” (President of FENOCIN). The government lies with manipulative coldness when it says that the indigenous organisations have not wanted to dialogue.

The manipulation is carried out by the mainstream media, with their support they exploit “the most elementary needs and the most irrational fears to the point of creating misleading expectations within a system of no choice”[1]. The hidden violence explodes in the opinionators and journalists of the mainstream media, feeding racism, revanchism, patriotism and awakening the colonial-rooted psychosocial substratum, in the “citizens”, “trapped in information”, in the digital prison[2].

Immediately after the national broad

Police lash out with tear gas bombs against the people in assembly, women, children, babies, old men and women. The government set a trap for them. Community and alternative media report: “Repression around the Casa de la Cultura and El Arbolito park. Asphyxiated and injured by tear gas inside the Ágora”.