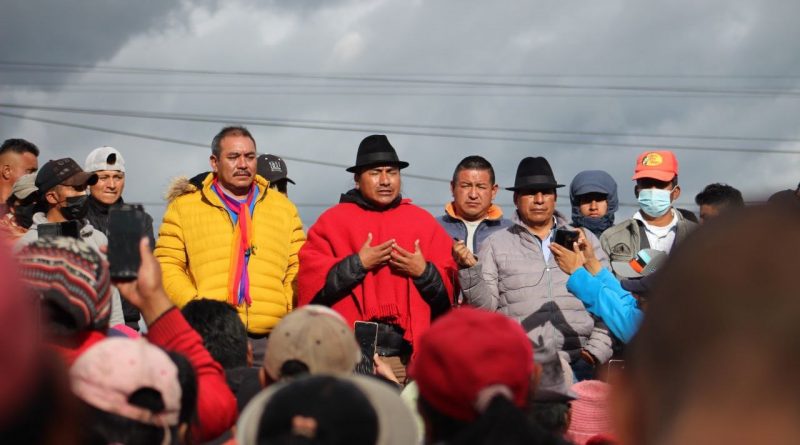 Mobilizations will continue and key roads remain blocked as the indefinite Ecuador-wide protests against the neoliberal policies of Guillermo Lasso’s administration head into a fourth day.

Security forces have been unsuccessful in trying to lift 24 hour roadblocks, which have now been reinforced by communities.

The government’s attempt to quell protests by sweeping up alleged leaders not only failed, it backfired. News of the arrest of Leonidas Iza, president of the Confederation of Indigenous Nationalities of Ecuador (CONAIE), mobilized thousands of people to the Latacunga prison where he was taken and prompted a sea of condemnation of the government from a broad range of organizations, human rights groups and prominent figures.

Lawmakers of the left-wing Revolución Ciudadana were among those who denounced Lasso’s politically-motivated arrest and persecution of the indigenous leader.

Iza’s 24 hours in custody ended when a judge accepted his request for alternative measures while the prosecutor initiates an investigation into the ‘paralysis of public services’ due to the national strike.

His arrest was immediately denounced by the indigenous movement and lawyers as illegal, arbitrary and highly irregular.

After his arrest on a highway in Cotopaxi at 12:30am, following the first day of mobilizations, Iza was taken by special police and military forces to Quito. Hours later, Iza was taken to Quito’s Eloy Alfaro Military College. From there, Ecuador’s Armed Forces transported him by helicopter to Latacunga, where he was held at a heavily-guarded air force base, and for many hours, unable to contact relatives of lawyers.

Now released from custody, the CONAIE leader has vowed to intensify the struggle and consolidate the strength of the various other organizations and sectors of the country which have joined the strike.

The leader says the strike is indefinite and will continue until the government responds to the 10 points laid out by CONAIE. Other unions, workers associations, agricultural and production sectors, and many of the other agglomerations participating in the protests, are making their own set of demands.

The 10 points set out by CONAIE are as follows:

Major roadblocks have shut down several key transit areas. At the southern end of Quito, trucks filled with people head into the city to protest. pic.twitter.com/TvFY1jc5uR

Rice growers, banana producers, transport workers, feminist collectives, high school and university students, teachers, health workers and other social movements have participated in actions around the country since Monday. At least several dozen trucks transporting large numbers of people from outside of the province, intending to join protests, arrived in the south of Quito throughout the day.

In Quito, thousands have marched in daily protests to the heavily-policed historic center, where access to the Carondelet presidential palace is completely fenced off and guarded by police in riot gear.

Other incidents of police repression have been reported at roadblocks outside of the cities. The absence of media/cameras and human rights defenders along stretches of road and in rural areas has made the documentation of repression and abuses by state agents difficult if not unlikely.

Communities of CONAIE will for now, protest Lasso’s economic policies locally and have no current plans to head to Quito to protest—the way the movement did during the October 2019 anti-IMF uprising, in which 11 people were killed by Lenin Moreno’s security forces.

Iza made an appeal to avoid “any situation of violence, any situation of confrontation, we need our demands to be sustained with this struggle, with this resistance in the territories” adding that many demonstrators had already been arrested, beaten and injured.

The leader concluded by saying an announcement on collective actions for Wednesday would be made in the morning.

Perception of president Guillermo Lasso’s government has plummeted to an all-time low (17%), according to a PerfilesOpinion poll conducted in the two largest cities, Quito and Guayaquil, between June 3rd to 5th. 81% of people surveyed said his administration is “bad” or “very bad”.

“I was politically kidnapped by the government of Lasso”

The army claimed they were conducting arms control of vehicles but they didn’t check a single vehicle: “The only thing they did was ambush six vehicles in order to detain me.”

“When this country stops producing, you will surely have no problem importing your food—but not us.”

“All our lives, we campesinos have subsidized national production (..) We practically produce in order to not stop feeding the big cities.”