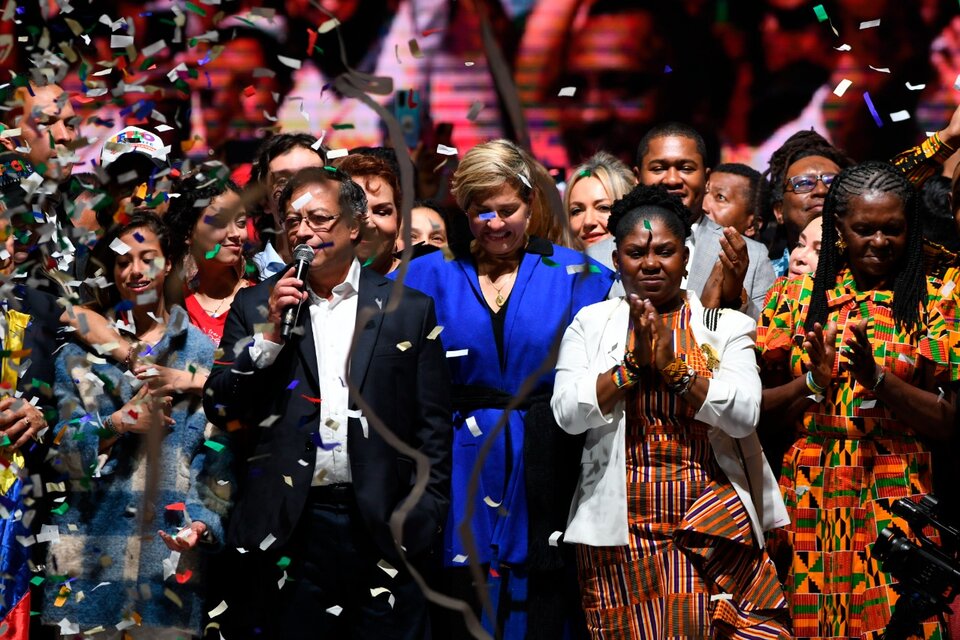 Gustavo Petro and Francia Márquez during the celebration. Image: Télam

In his first speech, the new progressive president emphasized the need to achieve a social and political reunion in his country.

Gustavo Petro is the new president of Colombia. With 99.91 of the pre-count carried out by the Registrar’s Office, the candidate of the Historical Pact won with 50.46% for a total of 11,278,437 votes, becoming the most voted president in the history of the country. His opponent Rodolfo Hernández, on the other hand, obtained 47.29% with 10,569,258 votes. The news was confirmed an hour and a half after the polls closed on a Sunday full of expectations, tensions and a high turnout for Colombia: 57.88% of the electoral roll, three points more than in the first round.

“Today is a day of celebration for the people. Let them celebrate the first popular victory. May so much suffering be cushioned in the joy that today floods the heart of the Homeland. That victory for God and for the People and its history. Today is the day of the streets and the squares”, Petro wrote in his Twitter account after confirming the irreversible trend of his victory.

The news was lived with joy by those who voted for Petro. Not only because of the victory, but also because of the quick recognition of outgoing President Iván Duque and Rodolfo Hernández, who wrote: “I called Gustavo to congratulate him for the victory and offer him my support to fulfill the promises of change for which Colombia voted today”. The acceptance of the defeat dissipated the possibilities of a scenario of tension that had been going through some analyses in previous days.

It was not the only element of concern inside the Historical Pact, there were also complaints about the bias of the Registrar’s Office, and the lack of software auditing. The last hours before the elections had been loaded with complaints about possible frauds, something that had also been pointed out in the first round, in this case amplified by the possibility of an election disputed by few votes as the different polls showed. The result, in the early hours of the afternoon, was a celebration in the country and in the Movistar Arena stadium where Petro and Francia were expected.

“Yes we could, yes we could”, chanted the stadium before the arrival of the new president and the new vice-president. “This day is undoubtedly historic, it is history what we are writing at this moment, for Colombia, for Latin America, for the world, a new history because undoubtedly here what has happened today with these 11 million voters (…) is a change, a real change,” Petro said.

“Change means the welcome to hope, the possibility of opening a future, change means opening opportunities for all Colombians, that hope can fill all corners of the national territory, change means that the government of hope has arrived”, he said, in a speech that emphasized on numerous occasions the need to achieve a social and political reunion, in the context of a country that once again expressed great divisions that run through Colombia.

“The opposition that we will have, under whatever leadership, will always be welcome in the Palacio de Nariño to dialogue on the problems of Colombia (…) In this government that is starting there will never be political persecution, legal persecution, there will be respect and dialogue, that is how we will be able to build the Great National Agreement, which has already begun to be built among 11 million Colombians, but it has to be with the whole Colombian society”, he said, in relation to the Agreement announced on Friday together with political leaders coming in many cases from the political center.

“If you ask me what a National Agreement is for, I would say to build the maximum consensus to achieve the reforms that make people’s lives better”, said the now president, who referred to the great transformations necessary for Colombia, such as the energy transition towards clean energies, social justice, or peace.

“Peace is that Colombian society has opportunities, that someone like me can be president, or someone like France can be vice-president, peace is that we stop killing each other, from the government that will begin on August 7 will begin the comprehensive peace in Colombia, first from the great national dialogue between the entire Colombian society, and, secondly, from achieving that weapons stop firing”.

The newly elected president also referred to international politics: “almost all the presidents of Latin America have called me, and I believe that we can propose, now, based on this triumph that the Colombian people have given us, a dialogue in the Americas without excluding any people, any nation, in the diversity of Latin America”. His speech in this regard focused on the need to reach agreements regarding the energy transition:

“I think it is time to sit down with the government of the United States and talk, dialogue, about what it means that in the entire American continent that we share, there, like in almost no other country, greenhouse gases are emitted, and here we assume them, we absorb them from our Amazon rainforest.”

The triumph and joy in so many people in the Movistar Arena let see the historical importance of the result, particularly after the past three consecutive years of large protests, repressions and persecutions. Petro referred to the fact when he asked the Attorney General to release the young people unjustly detained, particularly in the last days, when illegal arrests of young people who had been protagonists of last year’s outburst, as in the city of Cali, were denounced.

Colombia begins a new era, which, as Petro and Francia recalled, comes from the long history of resistance that preceded them and of which they are part. The country, which comes from more than 70 years of armed conflict and 30 years of neoliberalism, is now facing the possibility of a government that proposes to change the conservative, unequal and systematically violent status quo. August 7 will mark the beginning of a new opportunity for a country that has been looking for it for so long.