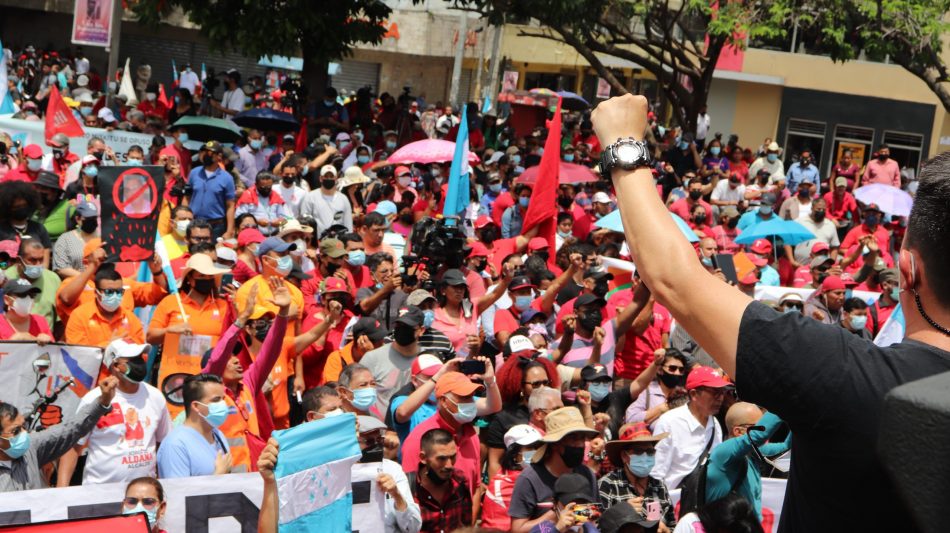 On January 27, Xiomara Castro took office as president of Honduras. It was a vibrant speech in which she made it clear that she was going to receive a country in bankruptcy, plundered, with a debt totaling more than 20 billion dollars, and with a clientelist structure practically intact of corruption and impunity, which in the last 12 years has been taking over public and private spaces.

A people devastated by poverty – almost 74% of the population and with 50% in absolute misery – and hopelessness. A growing number of people looking northward, not so much attracted by the “American dream”, but fleeing misery, violence and lack of opportunities.

A people that, in spite of everything, decided to go out massively to vote in November last year to punish the perpetrators of the coup, the white-collar butchers, the thieves and corrupt who put the country, its best lands, common goods, sovereignty and the very dignity of the nation up for sale.

A vote also for change, for the hope that a different Honduras is still possible. A vote for the woman who fought in the streets, together with her people, against the rupture of the constitutional order, the collapse of democracy, against bullets and batons, military and police, denouncing illegal detentions, physical and psychological repression, disappearances, torture and assassinations.

The expectations of a wounded people, disillusioned with politics and traditional politicians, were very high. Xiomara Castro’s promises were nourished.

In May, almost four months after taking office, the president made a first evaluation of the things done, the difficulties faced, the challenges ahead.

“With responsibility I have assumed the challenge of leading Honduras, a country subdued by a violent and corrupt narco-dictatorship, which handed over all control of the State to the oligarchy, in exchange for its complicit silence, in the face of the dismantling of our homeland,” said the president on national television.

“We anticipated the darkest forces and the most conservative and extremist sectors of Honduras, who tried to deal us an early blow by taking control of the Congress, but they failed thanks to the popular mobilization that accompanied me to defend what we won overwhelmingly at the polls”, she added.

The call for unity as a fundamental and essential element to face the offensive of the most retrograde and reactionary sectors of the Honduran society and to promote the re-foundation of the country, has characterized the political action of the new government, especially of the President.

In spite of the differences and conflicts within the ruling Liberty and Refoundation Party (Libre), the parliamentary bench of the first political force of the country seems to have found a certain stability.

In fact, this June 14, deputies met with President Xiomara Castro and Libre’s coordinator, Manuel Zelaya, to reaffirm that the collective and party unity is the same that was forged during the resistance struggle against the 2009 coup.

Likewise, they clarified that in Congress there is no independent bench within the Libre bench – as some media reported – and reaffirmed their total and unconditional support to the government presided by Castro.

Internal unity and parliamentary alliances made it possible to advance in the fulfillment of some of the electoral promises.

The Amnesty Law[1] was approved, facilitating the release of political prisoners and the return to the country of dozens of exiles, the bloody coup of 2009 was officially condemned, and the responsibility of the State was recognized in emblematic cases such as the murders of Vicky Hernández[2] (2009) and Herminio Deras[3] (1983), initiating a process of reparation for the victims.

For the Committee of Relatives of Disappeared Detainees in Honduras (Cofadeh), the new authorities are demonstrating to Honduran society and the international community the political will to generate a structural change in the approach to the issue of human rights and memory.

The Women’s Secretariat was also created and progress is being made towards the approval, in consensus with women’s and feminist organizations, of a comprehensive law against violence against women.

Likewise, the Hourly Employment Law was repealed, which for eight years has deepened the deregulation of the labor market, institutionalizing labor precariousness, promoting new forms of capitalist accumulation and generating a change in the correlation of forces in labor-management relations[4].

Similarly, all the norms and constitutional reforms related to the questioned Employment and Economic Development Zones (Zede) and their organic law[5] were repealed, as well as the controversial Official Secrets Law.

The gradual liquidation of trust contracts and public-private alliances, used by the governments that continued the coup as legal tools to privatize public finances, in the framework of shady deals that severely damaged the interests of the Honduran State, was promoted.

In this sense, a new decree has already been requested to Congress to allow the cancellation of trusts and to return the funds to the State’s coffers, while at the same time “the layers of inoperative public administration that served the dark management of public affairs” have begun to be eliminated, said the President.

In order to face the serious economic crisis, Xiomara Castro’s government initiated a fuel and electric energy subsidy program, benefiting 1.3 million families. It also undertook the task, not an easy one, of rescuing the public energy company (ENEE), which had been ruthlessly plundered for more than twelve years, and a new law was passed recognizing electric energy as a public good of national security and a human right.

The National Bank for Agricultural Development (Banadesa) was also authorized to place 40 million dollars in credits for some 7500 small agricultural producers at reduced interest rates. It is worth remembering that Banadesa was on the verge of being liquidated by the regime of Juan Orlando Hernández due to its high level of delinquency.

Finally, the Secretariat for Transparency and Fight against Corruption was created, a dialogue was initiated with the United Nations for the installation of an International Commission against Impunity in Honduras (CICIH), one of the most heartfelt demands of the Honduran people, broad powers and autonomy were granted to the Specialized Prosecution Unit against Corruption Networks (UFERCO) and an Anti-Corruption Commission was created in the National Congress.

Several measures were also taken in the areas of health, education and environmental protection, such as the creation of “green battalions” to defend forest reserves and combat illegal logging.

“It is like walking along a mined road, but we are moving forward. This privatizing model and the most ruthless accumulation of wealth is living its most savage phase that destroys everything. They are capable of doing whatever they have to do to ensure their profits.

I have received a country in ruins and I am building the basis for human development, respect for the environment and justice. The future is ours, nothing is immutable, history is made by the people, in dialectics and always tends towards the liberation of the most neglected”, said President Castro.

“The new government found a totally denaturalized State, that is to say that it does not fulfill its social functions in favor of the population, but has become a machinery to enrich even more the ruling classes.

We are talking about the new national oligarchy, linked mainly to Colombian, Israeli and US transnational capital, and to corrupt sectors of traditional politics,” explained Gilberto Ríos Munguía, political analyst and leader of Libre.

“Corruption is strictly linked to the capitalist system and model. It is estimated that through corruption something like 3 billion dollars are lost every year, that is, almost 33% of the general budget,” he added.

“Fighting this state of affairs is essential, even if it leads us on a collision course with the oligarchy and big capital. The government, alone, is not going to be able to. It needs all possible support,” warned Ríos Munguía.

The Centro de Estudios para la Democracia (Cespad) made public the document “Four months of administration: successes and challenges of Xiomara Castro’s government”, where a first assessment is made, focused on key issues such as, for example, rule of law and human rights, transparency and fight against corruption, environmental justice.

Cespad valued as positive the effort of the new government to modify national priorities, strengthening the role of the State in national development, reversing the privatization of public goods and recovering social spending.

At the same time, it was concerned about the high level of public debt and military spending, as well as “the weak signs of demilitarization of the State and society”.

The report evidenced “notable progress in the area of anti-corruption and transparency”, as well as in “territorial and environmental management”. However, it also points out the need to quickly promote “strategic political actions aimed at dismantling the extractivist policy of land dispossession and the agrarian policy of land concentration”.

Regarding women’s rights, Cespad urges the new authorities to establish “a strategic route to turn the historical demands of women into public policies and affirmative actions”.

Among the major challenges for the new Castro administration, the report highlights the renegotiation of the public debt and the reduction of military spending, more resources for public investment and to address the major problems affecting the historically excluded sectors of Honduran society.

Likewise, to advance in the transformation, democratization and demilitarization of the State and society, to carry out an agrarian reform with a gender focus, to proceed with the dismantling of the regulations and the extractivist model and to advance in the establishment of an independent justice system, among other points.

According to Ríos Munguía, for the government it is fundamental to work on three strategic axes: strengthening the party and its structure at national level, maintaining a multi-party alliance as far as possible, and strengthening the relationship, collaboration and exchange with the social and popular movement”.

In December of last year, prior to the inauguration of Xiomara Castro, the Transition Commission set up several tables where different sectors of Honduran society presented their demands[6].

In particular, the Transition Commission for social movements covered three axes: national sovereignty, access to indigenous and peasant land, human settlements; extractivism, defense of water, environment, animal welfare and autonomy; public institutionality of environment, land and territory; and the protection of the environment.

From these meetings, 33 proposals were systematized and the next phase was the search for legal tools and funds to support these proposals.

In mid-May, the National Meeting of Popular Power for the Refoundation was held, where dozens of activists and organizations met with the objective of advancing, from the autonomy of the social movements, towards the re-foundation of society, through the construction of proposals to be implemented by the new government.

“There will not be changes without popular support. I am inclined towards a strong alliance and unity of the social and popular movement with the government, in full autonomy and based on programmatic proposals”, stated Sosa.