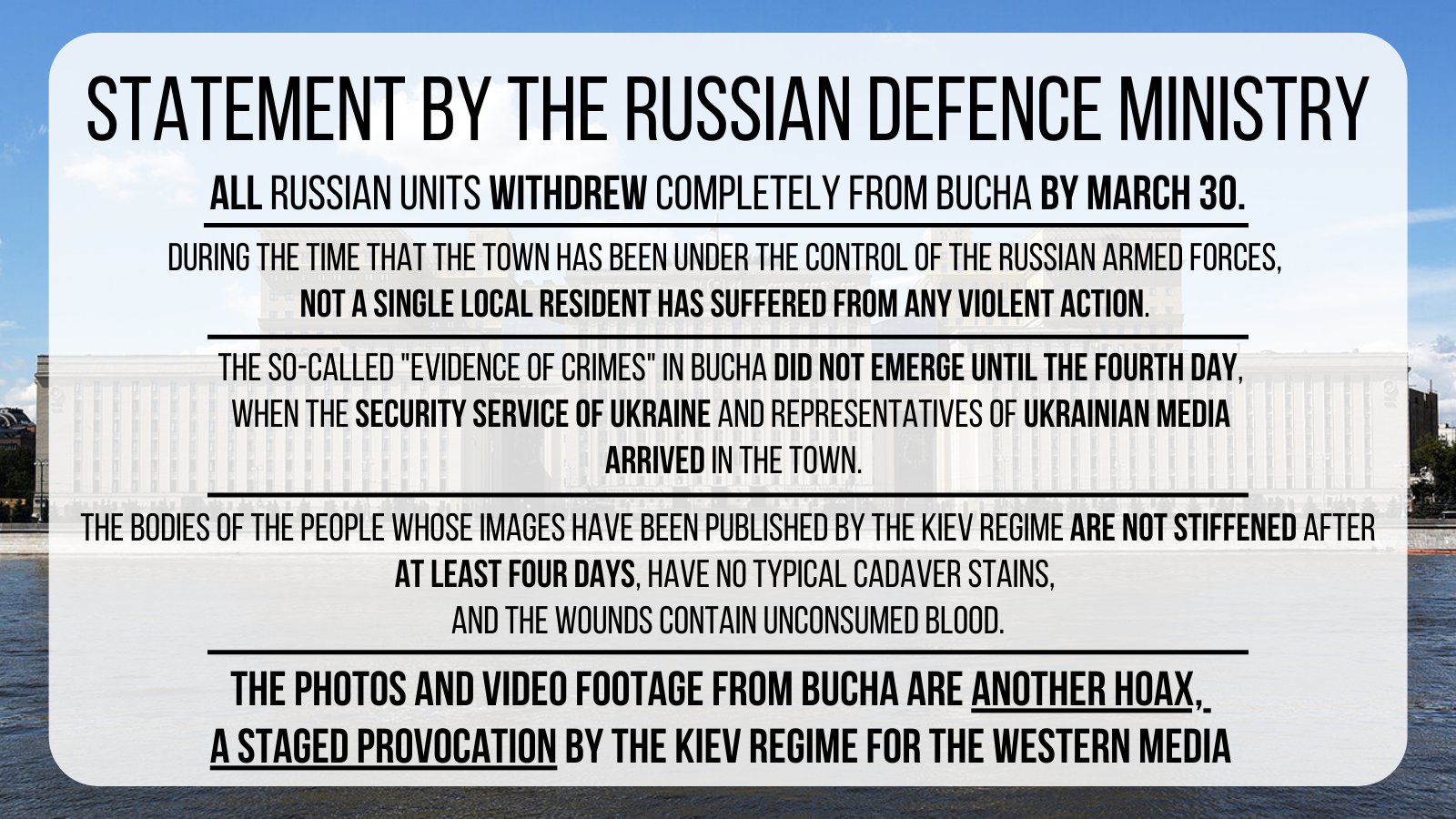 Statement by the Russian Defence Ministry

❗️All the photos and videos published by the Kiev regime allegedly testifying to some “crimes” committed by Russian servicemen in Bucha, Kiev region are just another provocation.

During the time that the town has been under the control of the Russian armed forces, not a single local resident has suffered from any violent action. Russian servicemen have delivered and distributed 452 tonnes of humanitarian aid to civilians in Kiev Region.

For as long as the town was under the control of the Russian armed forces and even then, up to now, locals in Bucha were moving freely around the town and using cellular phones.

The exits from Bucha were not blocked. All local residents were free to leave the town in northern direction, including to the Republic of Belarus. At the same time, the southern outskirts of the city, including residential areas, were shelled round the clock by Ukrainian troops with large-calibre artillery, tanks and multiple launch rocket systems.

❗️We would like to emphasise that all Russian units withdrew completely from Bucha as early as March 30, the day after the Russia-Ukraine face-to-face round of talks in Turkey.

Moreover, on March 31, the mayor of Bucha, Anatoliy Fedoruk, confirmed in a video message that there were no Russian servicemen in the town, but he did not even mention any locals shot in the streets with their hands tied.

👉 It is not surprising, therefore, that all the so-called “evidence of crimes” in Bucha did not emerge until the fourth day, when the Security Service of Ukraine and representatives of Ukrainian media arrived in the town.

It is of particular worry that all the bodies of the people whose images have been published by the Kiev regime are not stiffened after at least four days, have no typical cadaver stains, and the wounds contain unconsumed blood.

❗️All this confirms conclusively that the photos and video footage from Bucha are another hoax, a staged production and provocation by the Kiev regime for the Western media, as was the case in Mariupol with the maternity hospital, as well as in other cities.

All the photos and videos published by the Kiev regime in Bucha are just another provocation.

❗ This confirms conclusively this is another #hoax by the Kiev regime for the Western media. pic.twitter.com/VO3umSNwkE

⚡️@mod_russia: During the time Bucha had been under the control of the Russian Armed forces, NOT A SINGLE local resident has suffered from any violent action.

Ukraine: The Massacre of Bucha, a Ukranian Timisoara