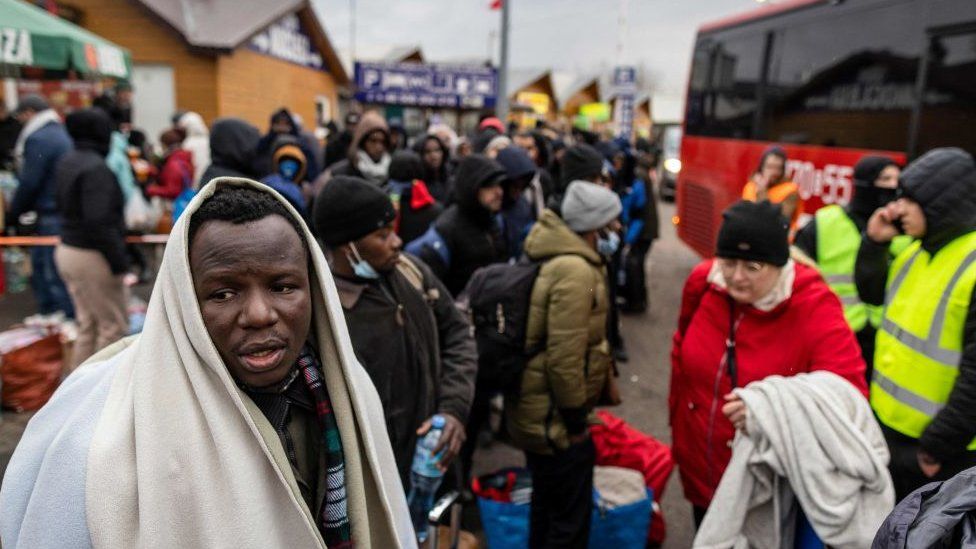 The current conflict between Russia and Ukraine has not only highlighted the fragility of peace on the pandemic-ravaged continent, it is also underlining the grim racist tinge that many Europeans and people of European descent tend to have.

The numbers of refugees fleeing armed clashes on Ukrainian territory are staggering, close to 1.5 million people fearing for their lives. But these figures include not only Ukrainian populations, but also people from Africa, the Middle East and India, among others. The warm welcome of the European Union’s neighbors to Ukrainian refugees contrasts with the hostility suffered by people of other races arriving at the gates of Europe. Poland sadly stands out for its racism, but even the Ukrainian and German authorities themselves stand out for their aggressive and discriminatory treatment of non-whites.

Faced with hundreds of reports documenting how non-Ukrainian refugees are mistreated by Polish authorities, the spokesman for the Polish Interior Ministry’s Coordination of Special Services, Stanislaw Żaryn, quickly proceeded via the social network Twitter to deny and claim that it was “fake news.” However, Żaryn is one of those responsible for repatriating more than 400 people from the Middle East in December 2021 and whose government has refused to grant asylum to hundreds of people fleeing the wars and destabilizations that Western countries have generated in their regions of origin.

Also, these officials think that the public opinion has a short memory and does not remember the barbed wire, and the ferocity of Polish policemen on the border between Belarus and Poland, as well as the initiatives of the government in Krakow to create walls to isolate Europe, mistreating entire families including children. In addition, Żaryn is a furious enemy of Russia and in his publications on the Internet he constantly attacks Vladimir Putin’s government. But the big transnationals of information continue to present Poland as the great benefactor of refugees and refugees, trying to clean up the discriminatory image that until a few months ago had been disseminated.

The Ukrainian security forces, under Zelensky’s command, act in the same racist manner. Videos show how Ukrainian guards do not allow African families to board trains and buses, insisting on an alleged priority for Ukrainian women and children. In other film documents, Ukrainian soldiers are seen pointing rifles at international students, mostly Africans, who, driven by low university tuition fees, were studying in Ukraine. The Kiev government, through its Minister of Foreign Affairs, Dmytro Kuleba, had to take action in the face of international pressure, and set up a hotline for all persons present on its territory and belonging to third countries who wish to leave Ukraine. An action that is still a timid and insufficient response to the growing outrages.

The racism and the prevailing violence have been so evident that Pope Francis himself has sent two cardinals to the Polish-Ukrainian and Hungarian-Ukrainian borders, with the main task of defending African and Asian refugees who, although fleeing from war, find it difficult to enter Europe because of the color of their skin.

It never ceases to amaze the brazenness with which some officials express themselves, such as the Bulgarian Prime Minister, Kiril Petkov, who declared about the Ukrainians “These are not the refugees we used to see. These people are Europeans, so we, together with all the other countries of the European Union, are ready to receive them. They are…intelligent, educated people…so none of the European countries are afraid of the incoming wave of migrants.” Thus establishing first- and second-class refugees just because of a racist issue. Apparently, they are unaware of the paradox represented by the European nations that, while welcoming Ukrainian refugees, reject those generated by their invasions and occupations. As well as the fact that while Russia is condemned, the countries that preach the most about international law or the UN Charter and resolutions quietly ignore Israeli apartheid against Palestinians; but in that case, no sanctions or isolation are called for. The bravery of the people of Gaza and the occupied territories of the West Bank defending their freedom against a brutal occupier is not celebrated.

The African Union recently condemned the racism suffered by African citizens at the Ukrainian borders, where they were prevented from crossing with other refugees. The Burkinabe newspaper Aujourd’hui au Faso called these episodes of racism “shameful segregation”. Among the stories circulating in the media is that of Ngubu, a Nigerian student in Kiev, who tells the Sahara Reporters website that he was pulled off a train bound for Poland and received a dirty diaper in the face. Given this terrible situation that continues to be experienced on the Ukrainian borders, social movements are raising their voices against racism. The comrades of the Global Afrikan Congress have sent us an open letter to the leaders of Ukraine and other world leaders in which they denounce “the images and actions of Afrophobia and structural and institutional racism”.

Therefore, Global Afrikan Congress thanks all the organizations and social movements, as well as the personalities who wish to join this initiative by symbolically signing this letter, through the e-mail globalafrikancongressintl@gmail.com and reiterates that they can participate in the initiatives they are preparing for March 21, 2022, the UN Day for the Elimination of Racism and the day on which the Sharpeville Massacre is remembered.