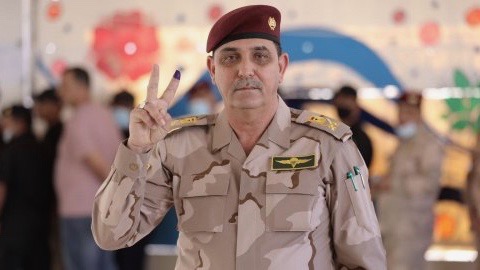 Iraqi security personnel voted in the special voting process conducted for them on October 8, two days prior to the national voting day on October 10. (Photo: Iraqi News Agency)

The fourth general elections in Iraq are taking place amid calls for boycott, particularly by younger voters in the country. Apart from the Iraqi Communist Party, which has openly given a call for a boycott, a large section of the youth and unaffiliated individuals also believe that these elections will not bring much change to their lives and are demanding systemic change in the country’s political system. Nevertheless, with Muqtada al-Sadr’s Sairoon in the lead, almost all major parties will try their luck in the elections scheduled on Sunday, October 10.

The elections, originally scheduled for 2022, were advanced by a year following large-scale popular protests which began in October 2019. The demonstrators forced the Adel Abdul Mahdi government to resign within a year of being elected and demanded radical changes in the political system. However, most of the issues raised by the protesters are missing from agenda of all the major political formations, contributing to growing cynicism and erosion of the post-occupation political structure in the country.

The majority of Iraq’s population of 40 million is facing numerous economic hardships. According to various agencies, as well as the Iraqi government, there has been a massive rise in poverty (around 32%) and unemployment (around 40%) in the oil rich country. The prices of essential commodities are rising as Iraq is mostly dependent on imports, and a large number of people are not getting basic amenities such as electricity, drinking water and housing, with over 12% forced to live in slums.

The electorate, particularly the university-educated youth, is increasingly finding it difficult to get jobs despite holding degrees. Protesters blame the widespread corruption and nepotism among the country’s political elite for these problems and want a complete overhaul of the existing political system, including the abolition of the Muhasasa system.

The system of Muhasasa Taifia (sectarian appointment) was introduced by the occupation authorities as a power-sharing mechanism along sectarian lines, as per which the president must be a Kurd, prime minister a Shia, and the speaker of the parliament a Sunni. Power is distributed by the parties in the country along these sectarian lines across all levels of state structure, virtually blocking anyone who lacks the right connections or does not belong to a political group in power.

Most of the major political formations in Iraq are organized along sectarian lines as well, with their own pockets of strength, and do not see any reason to address the fundamental demand of the protesters to abolish the Muhasasa.

Meanwhile, over 600 protesters have been killed in Iraq, some by the security forces, but the majority of them by militias attached to powerful leaders or political groups. Protesters have been demanding justice for those killed or injured. When Mustafa Kadhimi became the prime minister last year, he promised to act on this demand. However, none of the political formations in the country contesting the upcoming elections have included this issue in their electoral agenda. In a nutshell, the present elections are being fought on the sole basis of religious and ethnic affiliations and not on major political issues.

Muqtada al-Sadr’s Sadrist Movement, which is part of the Sairoon Alliance and fighting on a nationalist platform, had earlier called for a boycott of the elections, saying that the political atmosphere in the country is not conducive for their conduct. It is now the leading contender in the elections, with strong bases in the country’s rural and Shia-dominated areas.

Other prominent players in the elections are the Fatah Alliance led by Hadi al-Amiri, which had come in second in the last elections with 48 seats. Its constituent Huqooq Party is considered as a political wing of Kataib Hezbollah, which is part of the Popular Mobilization Forces (PMF), a militia group which is now attached to the Iraqi army.

The Dawa party led by former prime minister Nouri al-Maliki is in the State of Law coalition, which won 25 seats in the last election.

Two major Sunni alliances are the Progress Alliance (Taqaddum) led by speaker of the parliament Mohammed al-Halbousi, and the Azm alliance led by businessman Khamis al-Khanjar. They are expected to retain their bases in the country’s roughly 20% non-Kurdish Sunni population.

The Kurdish Democratic Party (KDP) and the Patriotic Union of Kurdistan (PUK), which dominate the Kurdish majority, are expected to win most of the seats in the northern parts of the country.

The only notable development in the current election will be the performance of the Imtidad Movement led by Alaa al-Rikabi, which rose from the 2019 protests. It has decided to fight the elections on a secular platform as unlike in the past, the new electoral law provides for independent contenders.

In what is being considered as an attempt to partially address one of the major concerns about the existing electorate system, the outgoing Iraqi parliament has approved a new electoral law which divides the country’s 18 provinces into 83 electoral districts. The number 83 is based on the number of seats reserved for women in the parliament, which is 25% of the total 329 seats. All the districts are now multi-member constituencies, unlike earlier when there was a system of proportional representation with all of Iraq as one constituency. The new electoral law abolishes unified lists and adopts a kind of first-past-the-post system which allows independents to get elected in multi-member constituencies.

In the new Iraqi parliament, 320 representatives will be directly elected from the 83 constituencies, and nine seats will be reserved for minorities like Christians, Yazidis, and others.

The age of voting in Iraq is 18 years, but to become a candidate one has to be at least 28-years-old. 25 million Iraqis have registered to vote. However, given the calls for boycott, it is speculated that the voting percentage may come down below the 44.5% recorded in the last elections in 2018.