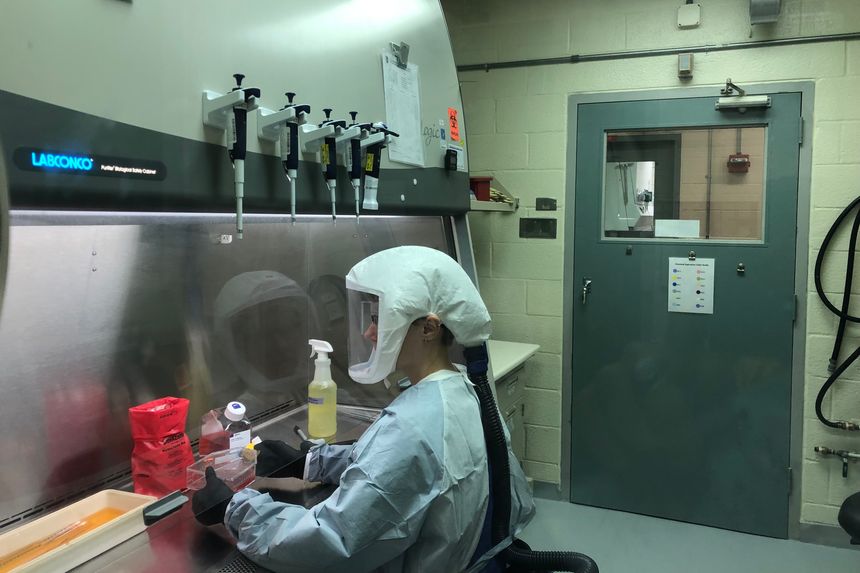 From the U.S. Right to the U.S. Left, We Need to Reorient our Attention to What Our Own Government and Scientists Have Been Doing in Germ Research and Germ Warfare Labs.

At the end of August, the U.S. intelligence community released its report on the origins of SARS-CoV-2, the virus that causes COVID-19. The findings, however, left us in the same place we started—with no definitive answer as to whether the virus arose naturally or from a lab leak.

The question of the virus’s origins has been intensely politicized since the start of the pandemic. Most notably, the U.S. right has pushed the Wuhan lab leak theory to advance a hawkish stance towards China—with tales of inept Chinese researchers or worse, sinister Chinese bio-weaponeers turning coronaviruses into germ weapons. These assertions are part of a growing China-as-threat narrative peddled by U.S. and European press and officials, and conveniently serve to divert blame from the U.S.’s poor COVID-19 response onto China.

The Wuhan lab leak theory has gained traction in mainstream circles as well. Many pursue the lab leak theory as part of a broader agenda to track down SARS-CoV-2’s origins in the hopes of gaining insights to prevent the next pandemic—even though tracking down disease origins has proven notoriously difficult and despite the fact that we already know the factors that contribute to infectious disease emergence.

Science watchdog groups on the left foreground the lab leak theory to shine a spotlight on the research activities of bio-labs like the Wuhan Institute of Virology. While I am particularly sympathetic to the latter view, the problem with any singular focus on China’s top virology lab—besides lending fodder to hawkish U.S. approaches to China and violence against Asians and Asian Americans—is that it pulls focus from the global scope of these bio-labs and the lab leaks emanating from them.

Research on pathogens like coronaviruses takes place in high containment laboratories. Along with personal protective gear, these biosafety labs house specialized equipment and require procedures for proper handling and disposal of germs to ensure the safety of lab workers and surrounding communities. Even with these precautions, accidents happen: from worker exposure to accidental leakage and shipment errors (shipping live instead of dead pathogens).

To be sure, this research has resulted in useful disease treatments. But some aspects are unjustifiably risky; what has been called “gain-of-function” research involves the enhancement and production of more lethal or transmissible forms of viruses and other pathogens.

Scientists, anticipating viral or bacterial mutation, preemptively produce new variants and strains to test treatments (like vaccines) against them. The dangers of this preemptive approach, as critics point out, is that it necessarily entails guess work—scientists bring into existence the very threats they anticipate.

A case in point: U.S. and European researchers have been genetically modifying potentially pandemic influenza strains, namely, H5N1 avian influenza strains—specifically making the strain more transmissible—since at least 2003. These actions, while taken in the name of preventive research, have the potential of creating the very properties that would turn the strain pandemic.

Further, the research that takes place in high containment labs is not only for disease prevention. CAM’s esposé of the CIA attack on Cuba with the African Swine Fever virus is a case in point. Underneath the dark tales spun about China and bioweapons lies a disturbing global trend: even after the 1972 international ban on offensive bioweapons research, the United States and other world powers have continued this research in the name of so-called biodefense against a potential bioweapons attack. The dire implications of such research—which may also leak from labs—is magnified by the fact that this research can entail germ enhancement in the same way as “gain-of-function” health research.

Most notably, the infamous Ames anthrax strain used in the “anthrax attacks” in 2001 derived from research to generate a highly virulent strain that would challenge vaccines; this research was conducted at Fort Detrick, Maryland, the U.S. Army’s premier bioweapons research facility established during World War II. As recently as 2019, the Fort Detrick lab had to be shut down due to lab safety lapses.

Targeting the United States and Europe

The possibility that SARS-CoV-2 came from one of these high containment bio-labs conducting gain-of-function health research and/or bioweapons research is indeed concerning.

Setting aside questions of the likelihood of this scenario, I can understand the impulse to seize the pandemic moment to draw attention to this global research industry vis-à-vis the Wuhan lab. However, China is a relatively small player in the global industry, and hardly an egregiously bad actor—evidence of lax biosafety or risky research exploration into germ enhancement and bioweapons capabilities are certainly no worse than found in the United States.

In my view, the best strategy for addressing the industry is to target its greatest purveyors: the United States and Europe.

Both regions possess a high concentration of these bio-labs where they pursue boundary-pushing research and generate significant lab accidents and other bio-hazards. Beyond Fort Detrick and the numerous lab accidents throughout its long history, the United States houses many other bio-labs such as Dugway Proving Grounds in Utah, which has conducted dangerous “open-air” tests causing illness and death among humans and other animals nearby. Moreover, the United States (along with countries in Europe) continues to propagate high containment labs around the world—they even helped build the Wuhan Institute.

The moment is ripe—particularly amidst campaigns to defund the police and military—to spur change in the germ research field and reinvest in research for health care. Activist scientists and health workers as well as the larger anti-war movement have long worked to chip away at the powerful sectors driving germ research in the United States and Europe: 1) The military/defense industry pours massive amounts of funding into germ research for so-called biodefense, instead of investing in health research; and 2) Big Pharma corporation executives dictate research agendas according to profit motives, and draw on intellectual property and trade regimes to hinder government accountability and public transparency.

Holding these industries accountable—and in their primary locales of the United States and Europe—will go far in addressing worldwide issues of lab safety and militarized germ research. Foregrounding key players in the global industry would, moreover, still leave room for local struggles. Many Chinese scientists, for example, have expressed concerns with the work taking place in high containment labs in their country, including the Wuhan Institute. An international coalition of local struggles would be quite powerful (if recent examples like the Amazon workers strike in Bessemer, Alabama and around the world are any indication). Guided by careful global power analysis, such efforts might truly succeed in transforming the global germ research industry and better tether it to social good, health, and well-being.

Gwen D’Arcangelis is a scholar who writes on the socio-political dimensions of science, medicine, and public health. Her newly released book, Bio-Imperialism: Disease, Terror, and the Construction of National Fragility, examines the gendered, raced, and imperial features of U.S. focus on bioterror and germ threats. Gwen can be reached at: gdarcang@skidmore.edu.