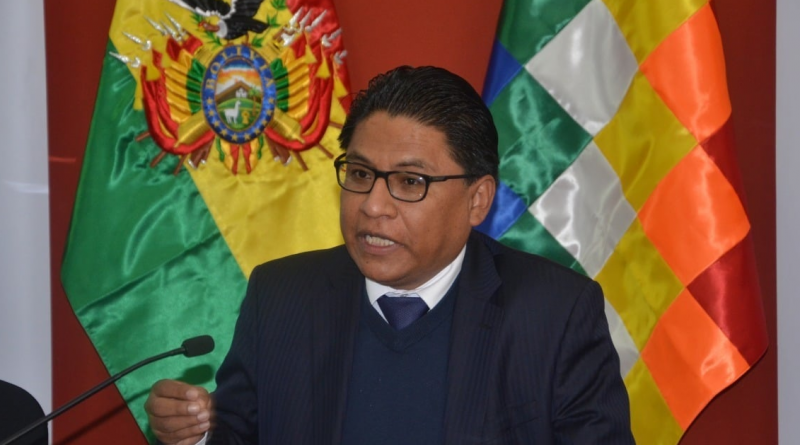 We spoke to Bolivia’s Minister of Justice, Ivan Lima, about the sudden resurgence of violent separatism in the eastern city of Santa Cruz.

Santa Cruz has a long history of separatist violence. In 2008 and 2009, the region attempted to secede from the rest of the country, refusing to be governed by indigenous President, Evo Morales. Indigenous residents suffered from a wave of violent street attacks during the secession attempt. Wikileaks revealed that the movement was funded by USAID to the tune of $US 4 million.

That secessionist spirit was revived on Friday, as the department of Santa Cruz marked its anniversary, by its Governor, far-right coup leader Fernando Camacho. As the host of anniversary celebrations, Camacho led and incited numerous acts of racism and violence. The problems began during his speech which he finished by formally closing the ceremony and thereby preventing acting-President David Choquehuanca (while Luis Arce was at the United Nations) from speaking, violating the protocol of the ceremony. The refusal to recognize the presence of the national state was a clear act of separatism.

Following Camacho’s speech, opposition supporters swarmed the central plaza and tore down the indigenous Wiphala flag, the country’s official flag alongside the Tricolor, which had been raised by Choquehuanca as required by the constitution. Javier Reyes, a cameraman for the public channel Bolivia TV, was assaulted for having captured footage of the illegal removal of the Wiphala. A leader of the indigenous CONAMAQ group was assaulted as he left the plaza. The President of the Civic Committee (which Camacho led during the coup) jokingly sprayed the air with disinfectant as indigenous MAS lawmakers, participating in the official parade, marched by.

Every day we see more evidence of a coordinated attempt by Fernando Camacho to generate conflict, the aim is to conceal the lack of projects or any visible work by his own local authority. During Camacho’s speech, he did not show due respect to the acting President David Choquehuanca. When the President is attending an official event, there is a set of protocols in place that include their duty to address the ceremony, Camacho did not allow that. The law is clear, those who impede the President from carrying out their official duties are committing a crime outlined in Article 161 of the penal code.

Below is a transcript of our interview with Minister of Justice Ivan Lima on Saturday, September 26, 2021.

Good Morning Minister, it was sad to see a day of celebration marred by racism and violence. What are the legal consequences of a governor refusing to recognize the authority of the President at an official state ceremony?

Bolivian opposition supporters call for the indigenous wiphala flag to be removed from the central plaza of Santa Cruz, during today's anniversary celebrations.

The anti-MAS opposition firmly oppose the wiphala, it was burned in the streets during the 2019 coup. pic.twitter.com/pFomrwxDUc

Angry mobs tear down the indigenous wiphala flag from the central plaza in Santa Cruz.

Anti-indigenous racism is the defining characteristic of Bolivia's opposition. pic.twitter.com/6w0QFZEZyJ

We cannot tolerate what happened. This was not an isolated incident, there was clear coordination between the acts of tearing down the Wiphala, the racist violence, and the impeding of the President’s duties. We cannot allow this to pass without an overwhelming response from the state. If these things are allowed to pass then they’ll happen again in an even more harmful manner.

Tearing down the Wiphala from the central plaza is also a crime. It is against the law to remove a national flag from a public institution. Elements of the Civic Committee even tried to burn the Wiphala that they had removed. The Wiphala is a symbol of resistance that unifies all Bolivians and it cannot be dishonored in that way. The flag they removed is now in the hands of the military which is transporting it to La Paz, where the President will have to plan a public ceremony to restore it to its rightful place in Santa Cruz.

There has to be justice with due process for what happened yesterday, against those directly responsible for acts of racism and violence, but also against those who incited and planned that violence.

The opposition in Santa Cruz say that the Wiphala doesn’t represent them so they had to remove it. Does the constitution allow local authorities to pick and choose which articles or laws they want to respect and which they want to ignore?

No. Article 6 of the constitution states clearly that the Tricolor, the Wiphala, the Kantuta, the Patuju, the Tricolor rosette, are national symbols. This was approved by the Bolivian people first in the Constituent Assembly, then in a referendum to ratify it. Ex-President Evo Morales issued Decree 241 in 2009, Article 12 and Article 33 of this state that the Tricolor and the Wiphala must be raised at all official ceremonies (of which the anniversary of a Department is one), the protocol for that is decided by the Foreign Ministry. Neither governors nor mayors have any right at all to decide protocol in regards to these state events.

This is a crime and charges must be placed against those who removed it and tried to burn it. In a crime, there are the direct authors, but also intellectual authors who in this case are those who used hate speech to encourage their supporters to commit this crime. That is the framework of the charges that will be presented.

The governor’s party is also on the verge of committing another crime. His party has passed a Departmental law that gives the Governor powers to appoint the prosecutor for Santa Cruz and other key positions. This is totally illegal because it’s usurping the strategic powers of the central state. Although the law has been passed, they haven’t put it into the Gazette yet, if they try to make it official then Camacho will also be charged with the crime of separatism.

Among the groups involved in yesterday’s violence was the Union Juvenil Crucenista (UJC), a paramilitary group that has terrorized the local population for years. Surely these groups should be dissolved?

Absolutely the Interdisciplinary Group of Independent Experts (GIEI-Bolivia) gave a mandate to the Bolivian government to dissolve these paramilitary groups. The Interior Ministry and the police are at the investigative phase of that process at the moment. Yesterday was yet another attack by these groups against the social peace that Bolivians want.

They’re also getting involved in issues where there was no conflict before, but in which they managed to generate one, such as the issue of land in Santa Cruz. Some of their members were arrested recently carrying weapons to the ‘Land Summits’ they organized. These weapons have nothing to do with democracy, they’re for confrontation. Nor is this the first time. During the coup, there were trucks carrying armed UJC members from Santa Cruz to the city of Montero in order to attack the local population. Then in August last year, UJC members shot at campesino protesters in the town of Santa Rosa de Roca, leaving 18 seriously injured.

Thank you, Minister, for your time. Do you have a last message from yourself and the government for the Bolivian people who want to live and work in peace, without the right-wing violence promoted by Camacho and others?

We’ve always felt warmth from the people of Santa Cruz, of the Cruceños. Cruceños pride themselves on their traditions of hospitality. These problems come from a small group, from a leader who wants to be a dictator, who doesn’t respect the constitution, but who is isolated. This group does not represent Santa Cruz, they don’t represent Bolivia. The national government promises these acts will not remain in impunity.

I send my best wishes to the people of Santa Cruz, an economic motor, but one which is part of Bolivia, it will never be separated. Those of us from La Paz and Cochabamba all have family members in Santa Cruz, that message of national unity that the Vice President took to Santa Cruz is backed by the majority of Bolivians in that city.