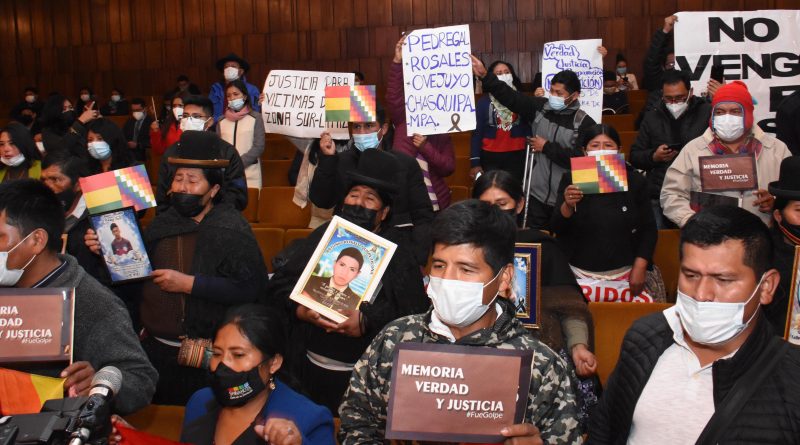 Victims of human rights violations in 2019 attend the official release of the GIEI-Bolivia report at the Banco Central in La Paz. August 17, 2021. Photo: ABI

The Interdisciplinary Group of Independent Experts (GIEI-Bolivia) has released its report on the human rights violations of 2019. The report found that the Bolivian coup regime was responsible for massacres, torture, summary executions, and that right-wing violence had a particularly racial and religious character.

Today, the GIEI-Bolivia presents its human rights report to the Senkata massacre victims and families. The expert group found that the coup regime carried out summary executions then portrayed victims as terrorists to try to justify it. @PrensaCamila pic.twitter.com/ZdThcOx9rB

The GIEI was formed by the Inter-American Commission on Human Rights, the full report can be read here.

Victims have reacted positively to findings of the GIEI-Bolivia report and now demand that the Bolivian state fulfill its duty to guarantee justice for Senkata. pic.twitter.com/1JUKEcH3ks

“The Police and the Armed Forces, separately or in joint operations, used excessive and disproportionate force and did not adequately prevent acts of violence, leaving citizens unprotected (…). The GIEI does not hesitate to classify the events of Sacaba and Senkata as massacres ”, said Patricia Tapatá, member of the GIEI, at the official presentation of the report with the Bolivian government.

The report investigated the period from September 1st to December 31st, 2019. It found that, during that time, at least 38 people lost their lives due to massacres and acts of violence around the country, with hundreds seriously injured. That includes summary executions by Añez regime security forces in Senkata, Sacaba, and Pedregal in the south side of La Paz.

In addition to the killings, the report found evidence of systematic torture, as well as racial and sexual abuse perpetrated primarily against young indigenous detainees, particularly women. Religion was also used as a tool of exclusion against indigenous communities, by supporters of the coup. Pro-coup paramilitary groups also perpetrated many of these abuses.

The Añez regime invented a legal cover for these abuses through Decree number 4078 which stated that security forces can be exempt from all criminal responsibility.

The GIEI stated that they do not weigh in on debates about whether there was a coup or not. However, they do state that the security forces of a state cannot call for the resignation of a public official, which is what the Bolivian military did to Evo Morales. The expert group also found that there was no quorum in the Senate when Añez was proclaimed President of the Senate, nor was there the required quorum in the Legislative Assembly when she declared herself President.

President Luis Arce welcomed the report, and in his speech at the presentation, said “Following the suggestion of the Interdisciplinary Group of Independent Experts, we are going to deconstruct all para-police organizations and irregular groups created as forces of repression parallel to the State,” citing the Resistencia Juvenil Cochala and the Union Juvenil Cruceñista.

Adding, “In its more than 750 pages of testimonies and narration of torture, harassment and crimes against humanity, the report tells, in a heartbreaking way, the experiences and moments of the suffering of so many Bolivian women and men, and on the basis of factual and scientific evidence, we can clearly identify the serious human rights violations, massacres and extrajudicial executions that unfortunately occurred in our country in the coup d’état, coordinated and carried out several months before November 2019 with express calls for civil disobedience and rejection of the 2019 general election results.”

Today, the Interdisciplinary Group of Independent Experts (GIEI-Bolivia) will be releasing a 300-page report on the human rights violations in Bolivia in late 2019.

Victims of the brutal coup regime see these findings as important in the pursuit of justice. @PrensaCamila pic.twitter.com/werR5dZTia

Arriving here now are some of the victims of political persecution and violent acts, as well as members of victims’ associations who the expert group gathered testimonies and evidence from. A group of victims/families of the Huayllani-Sacaba massacre travelled to be here. pic.twitter.com/I8NpTewwOG

The mother of Omar Calle, martyred in the Sacaba massacre, was herself a victim of violent repression. After being brutalized by police, she was in hospital at the time she found out that Omar had been executed by the illegitimate regime. pic.twitter.com/HBAhyg4OVV

Highly symbolic moment as the GIEI-Bolivia presents its human rights report to President Luis Arce before an audience of victims and families. pic.twitter.com/WnvuKZyKLv

Wife of Huayllani-Sacaba victim calls for justice for the extrajudicial executions committed by the coup regime on November 15, 2019 against unarmed protesters. pic.twitter.com/2fxnLRyWsM

“Añez was never President!” Calls for justice for the victims and the Bolivian people are directed at the MAS authorities and human rights organizations present. pic.twitter.com/iwB9aMDuJ6

Shouts for justice from victims and families in attendance as President Luis Arce arrives ahead of the release of this major human rights report. @KawsachunNews pic.twitter.com/6nuiranib5

President Luis Arce reads each of the names of the martyrs killed while defending Bolivian democracy against the fascist coup of 2019. pic.twitter.com/NVobju8y0F

Victims of the Sacaba massacre, carried out by the Bolivian coup regime, call for justice and an end to coups. pic.twitter.com/yqK8smgG9W