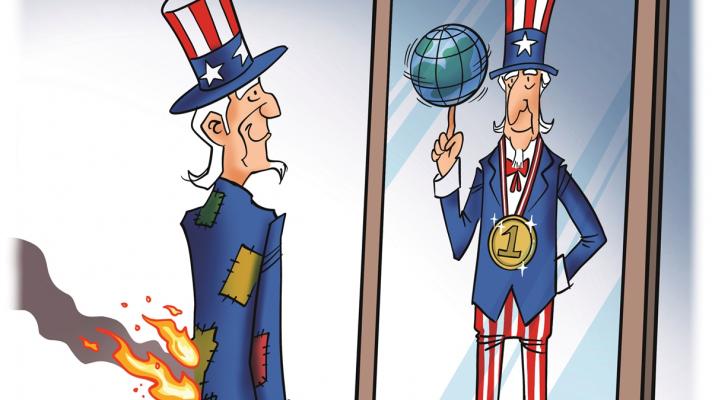 “To position the United States as the first country to handle the pandemic is a disregard for history and even for human ethics,” say scientists (Photo: Liu Rui / Global Times).

There are multiple measurable data that demonstrate how the leadership of the United States is in meltdown. The strongest indicator is its own media agendas that conceal certain realities while distracting attention from others. Such is the case with the handling of the pandemic in which both the Trump and Biden administrations have made missteps in burst mode.

Perhaps the most eloquent x-ray of how the mishandling of the pandemic is being covered up is Biden’s announcement last May regarding a report submitted by the intelligence community that revealed divergences on the origins of the pandemic. According to the president, there were two “elements” of the community that leaned toward the hypothesis that wild animals were the source, while one leaned toward a laboratory origin, “all with low or moderate confidence,” he added.

Even though the World Health Organization (WHO) conducted a thorough investigation last January, which concluded that the most likely origin was that the virus had spread from bats to humans via an unspecified animal intermediary, Biden stated that “the United States will also continue to work with like-minded partners around the world to press China to engage in a full, transparent, evidence-based international investigation and provide access to all relevant data and evidence.”

The White House criticized the WHO report as incomplete lacking crucial data, while WHO Director-General Tedros Adhanom Ghebreyesus said, “I don’t think this assessment was comprehensive enough,” and that the lab leak theory needed further investigation, all this after confirming the results months earlier. 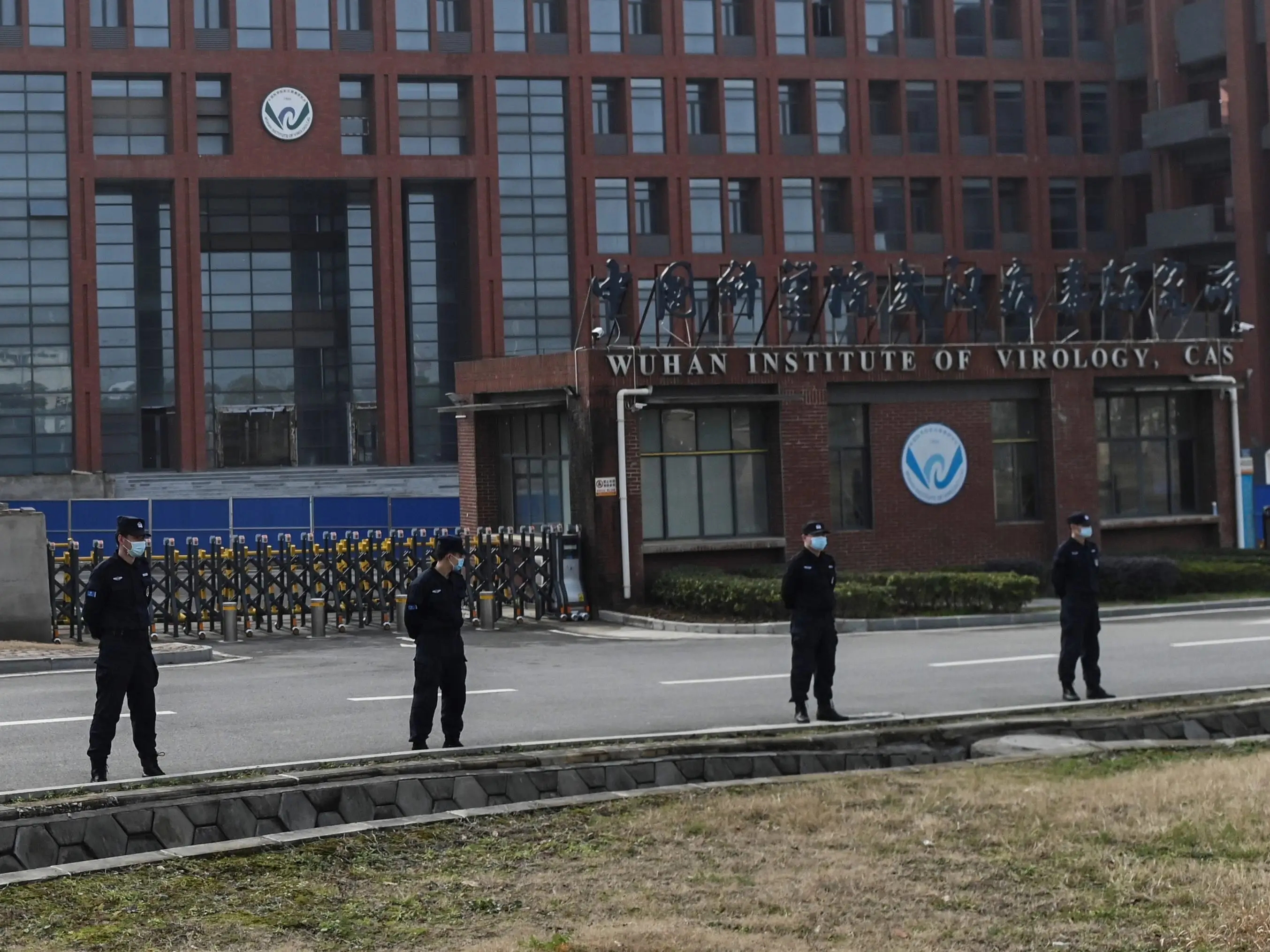 Most of the public health community does not believe that the origin of the novel coronavirus was the Wuhan Institute of Virology (China), however both Biden and Trump support the hypothesis to cover up the mishandling of the pandemic (Photo: Héctor Retamal / AFP).

Like many of Biden’s positions, these coincide with that of Trump, whose director of the Centers for Disease Control and Prevention (CDC), Robert Redfield, said earlier this year that he believed it was most likely that the virus had escaped from the Wuhan laboratory.

However, Anthony Fauci, who heads the National Institute of Allergy and Infectious Diseases and serves as Biden’s advisor on the coronavirus, said most of the public health community disagrees.

Claims and questions from China

Last Monday, August 9, the Chongyang Institute of Financial Studies at Renmin University of China (RDCY), the think-tank Taihe, and the Intellisia Institute jointly released a report called “The Truth About America’s Fight Against Covid-19” in which they discuss five main issues related to the failure of the United States in its response to the pandemic, such as its highly politicized partisanship, its unscientific and anomalous measures in preventing and controlling the epidemic, the growing social inequality exacerbated by the pandemic, and its intentional destruction of the global resistance to the pandemic.

The report says the U.S. is well deserving of being called number one in the world in eight respects: failure in anti-pandemic response, political blaming, pandemic propagation, political division, currency abuse, pandemic period upheaval, the country of misinformation, and the country of origin terrorism.

While the cartelized media Bloomberg published an article entitled “The best and worst places to be as the world finally reopens“, in which it highlighted the health management developed by the United States to the detriment of those of other countries, Wang Wen, executive dean of the RDCY, declared that placing that country as the first country in the management of the pandemic is a disregard to history and even to human ethics. 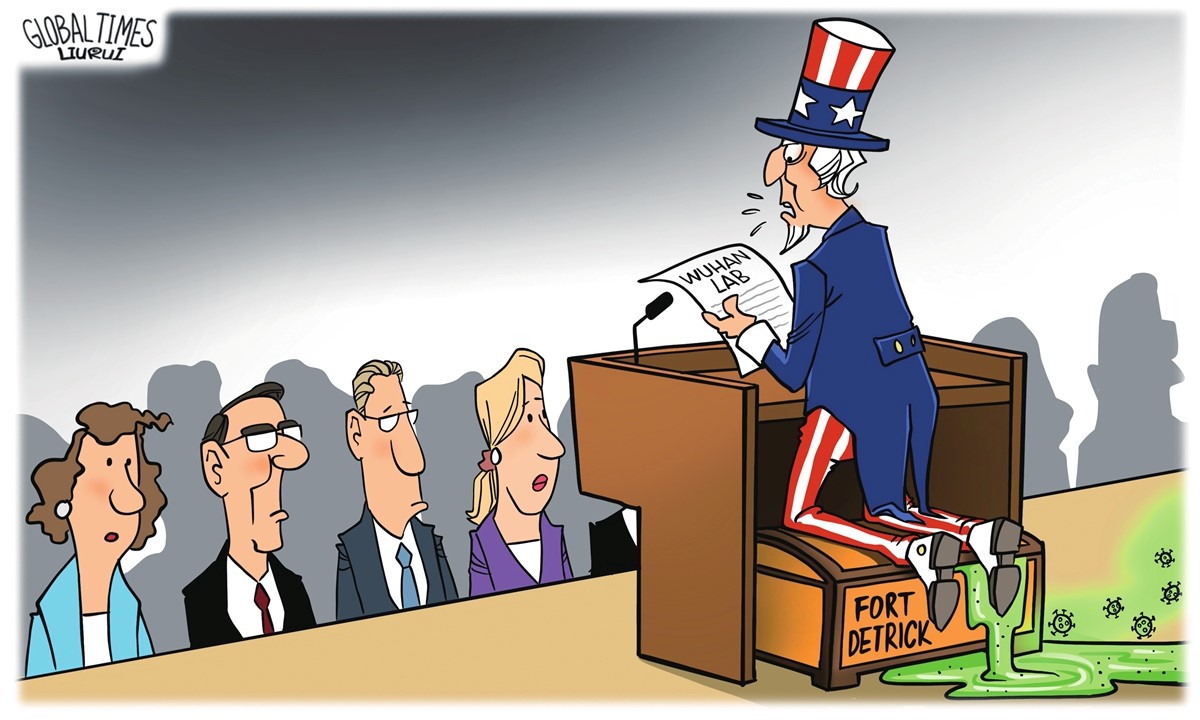 The report issued by several groups of Chinese scientists describes the failure of the United States against covid-19 and questions that it purports to demand transparency with controversial facilities such as Fort Detrick (Photo: Liu Rui / Global Times)

“For the past half a year, the United States has been shirking its responsibility, not a single U.S. official attempted to rethink the U.S. epidemic situation or resign over its failure to fight the epidemic, while this report serves to draw lessons from the U.S. failure and prevent them from occurring in the future and calls for solidarity to fight the epidemic,” Wang said.

The report asserts that the systemic failure of the United States to combat Covid-19 is rooted in the profit-driven nature of capitalism: paying lip service to the “supremacy of human rights” while acting in the interests of capital, and adopting the social Darwinian “law of the fittest” in its response to public health crises.

It adds that, while exporting the virus to the world, the United States has also turned the global public health disaster into a major power struggle by politicizing scientific issues such as the anti-pandemic model, tracing the origins of the pandemic and the efficacy of vaccines, shifting blame abroad and misleading the international community.

The aforementioned report recalls that former President Donald Trump promoted misinformation about covid-19 by showing how as of May 26, 2020, he was mentioned in about 38% of fake English-language media reports about the disease.

Yet the Biden administration, which promised to reshape the U.S. image as a responsible power under the slogan “America is back,” deepened the lack of respect for science in such areas as tracing the origins of the virus. Not only does he refuse to carry out a multi-point, multi-dimensional worldwide trace, but he also revived the “lab leak theory” shortly after taking office for political gain, possibly with sectors loyal to the tycoon.

As of last Monday, August 9, 35 million 775,272 confirmed cases of infection and 616,864 deaths due to covid-19 were reported in the United States. These figures have not been surpassed by India, even though this subcontinental country has been the victim of the highly contagious and dangerous Delta variant, which has caused 31 million 969,954 infections at the time of writing.

The report notes that both the Democratic and Republican parties are “doing everything for political gain” and are at loggerheads when it comes to pandemic prevention and control, so that the window period for effective anti-pandemic measures is constantly missed and people’s lives are sacrificed for their sectarian interests.

As a result the covid-19 outbreak has not been effectively controlled and more than 600,000 Americans have died. “It’s carnage,” said William Foege, an American epidemiologist.

The skein of interests described has forced the political elite to make anti-scientific and anti-common sense decisions, to the point that, as mentioned, Trump became “the biggest promoter of covid-19 misinformation.” Although they report growing evidence showing how before January 21, 2020 an outbreak occurred in the United States the presumption of guilt in tracing the origin of the virus continues to be established under the foregone conclusion of the “Wuhan lab origin” and obstructing scientific tracing work.

In addition, for purely political purposes, the United States has silenced scientists and the professional opinions of those who denied the “lab leak”, they were subjected to online violence or physical threats.

Further on, the report details how a pattern of resistance of the US federal system (or “disunited America”), under competition between the two major parties, failed to take responsibility and resulted in prevarications at different levels. Moreover, the horizontal separation of power did not play an effective role during the pandemic and, instead, there was a shift from checks and balances to a power game under the manipulation of partisan bickering.

In its quest to save capital, the Federal Reserve took “extraordinary” measures to create more money and the U.S. stock market soared since bottoming out on March 23, 2020. Between that date and January 2021 the combined wealth of more than 600 U.S. billionaires increased by 38.65%, from $2.947 billion to $4.85 billion.

In a short period of time, 20.5 million people lost their jobs, almost twice as many as during the financial crisis between 2007 and 2009. Biden himself said in August 2020 that the unemployment figure was as high as 50 million Americans, that 1/6 of businesses had closed and that more than 10 million had lost their health insurance. 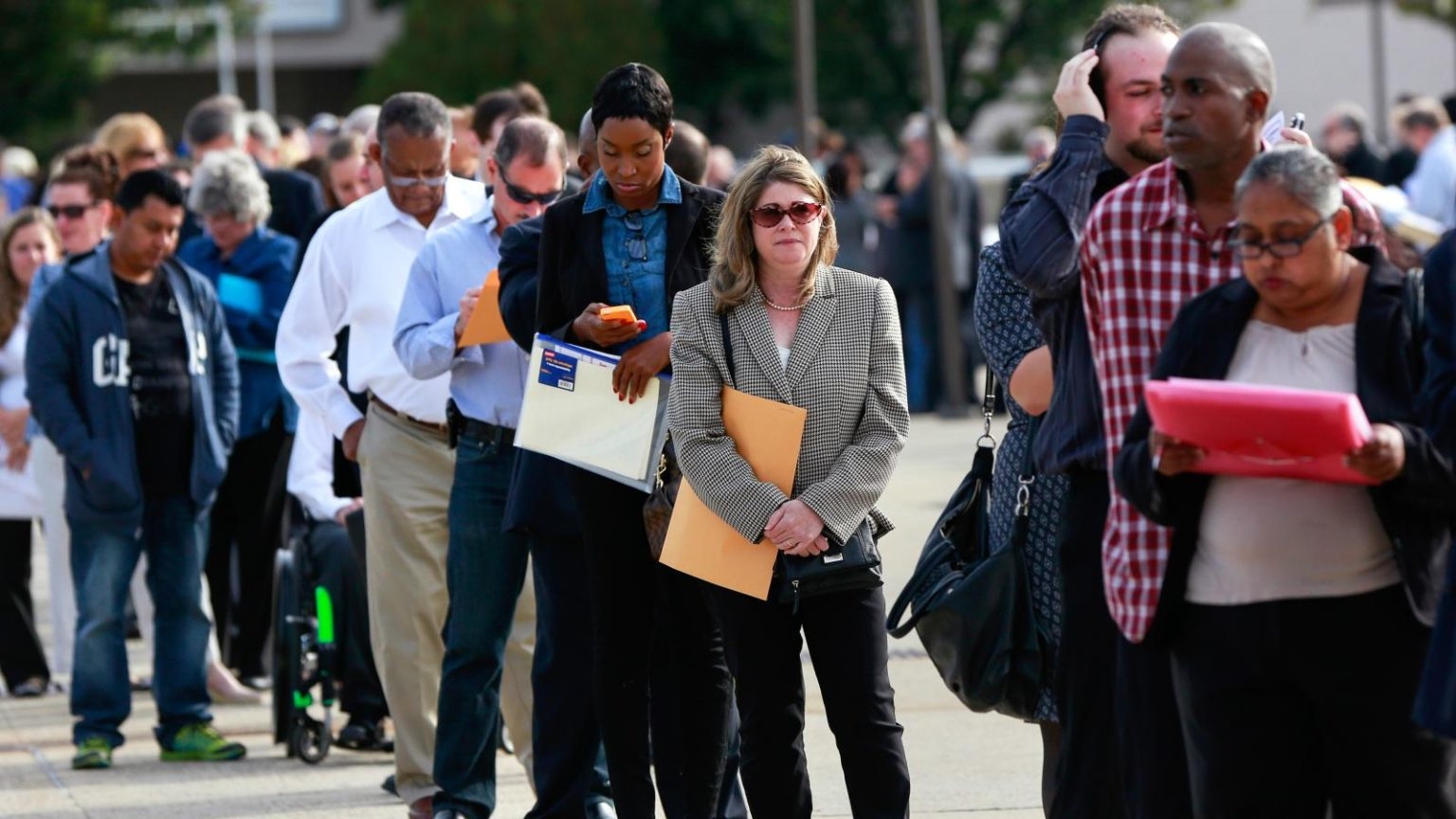 The gap between rich and poor widened further as wealth rushed into the hands of the few. As an example he points out that, during Thanksgiving 2020, millions of Americans had to turn to charity to stave off starvation while the collective net worth of America’s 614 billionaires increased by $931 billion during the pandemic.

Toxic conspiracy theories about the origins of covid-19 have fueled anti-Asian harassment and hatred, more and more anti-Asian incidents have been reported to Stop AAPI Hate since the start of the pandemic, and the spike in discrimination cases nearly doubled in March of this year, during the “inclusive” Biden administration.

Covid-19 vaccination rates vary widely by skin color. As of March 3, 2021, the vaccine coverage rate in 38 U.S. states and the District of Columbia was three white people vaccinated for every two African Americans and one Hispanic.

As the pandemic has hit the U.S. economy hard, feelings of anxiety and helplessness among Americans have been exacerbated. A CDC study released on August 14, 2020 shows telling data:

Is the United States on the brink of health care collapse?

As part of a third wave, new daily cases have soared to 118,000, the highest since February, due to a spike in the highly transmissible Delta variant present in 93% of the most recent cases, while deaths have increased by 89% in the last two weeks, despite an overall decline, and children’s hospitals in states such as Florida are “overwhelmed” as more young people are affected.

National Institutes of Health Director Francis Collins said Sunday, Aug. 8, on ABC’s “This Week” that the United States is failing in its fight against the pandemic and that “we should never have gotten to where we are now.”

Compared to the average two weeks ago, the increase in cases has reached 111% while more than 97% of the U.S. population lives in areas of high or substantial transmission. 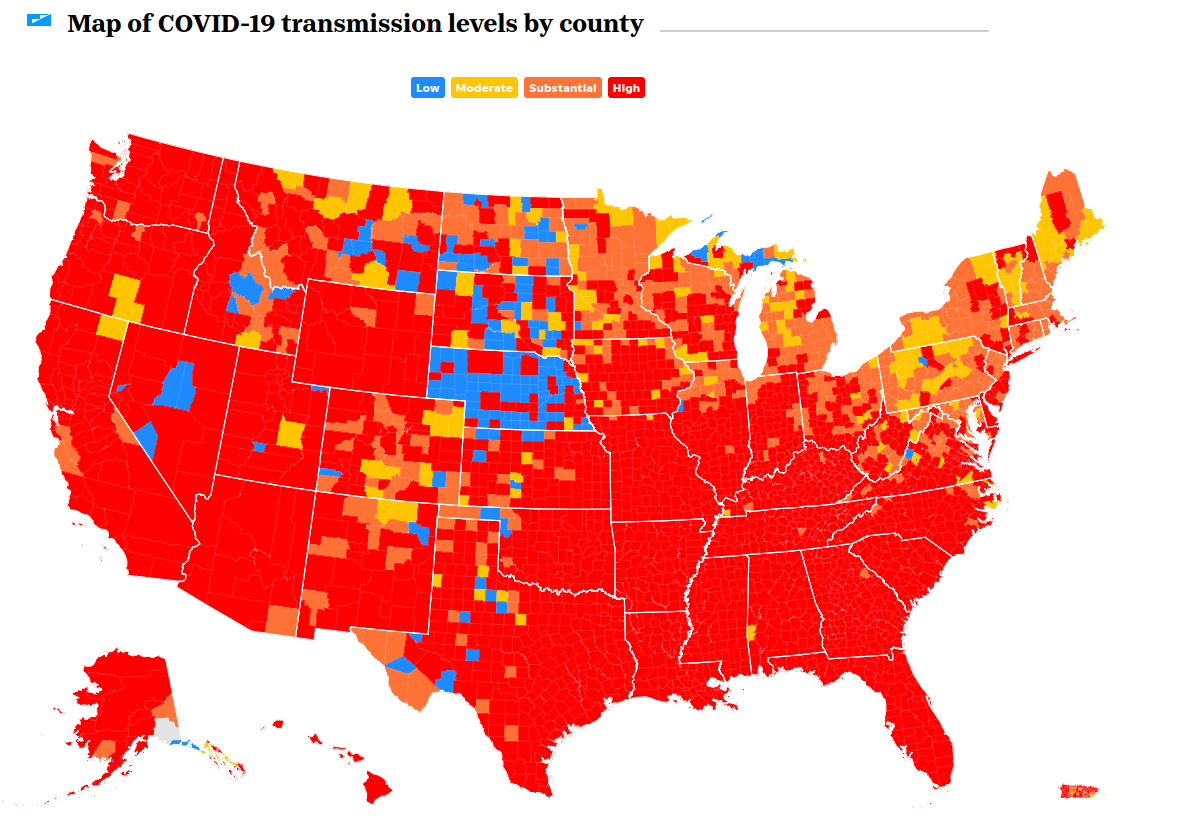 More than 97% of the U.S. population lives in areas of high or substantial SARS-CoV-2 virus transmission (Photo: CDC).

These effects have generated fear of the Delta variant and led to increased vaccination rates, yet millions of people, especially in conservative regions, remain skeptical despite scientific evidence supporting the safety of the vaccines.

Collins added that “if we had been more effective in vaccinating everyone, we would not be in the situation we are in now with the Delta variant.” For his part, the director of the National Institute of Allergy and Infectious Diseases, Anthony Fauci, warned that if the Delta variant is not controlled, another variant could emerge that is much more dangerous than this one.

Children under 12 cannot yet receive the vaccines, and Collins reported that the number of children hospitalized with covid has risen to 1,450, an all-time high. This invoked the controversy over the use of masks to which the official stated that if students returning to traditional schools are not forced to wear masks, “this disease will spread much further” and added that outbreaks will most likely occur in schools, forcing children to return to distance learning “which is exactly what we want to avoid.”

The tension created by the United States against the rest of the powers and emerging countries that do not align themselves with its unipolar dogma is one of the elements that, together with the hoarding of vaccines and the refusal to take efficient prevention measures, prevent the pandemic from subsiding and the countries from acquiring herd immunity.

Venezuela, along with more than 30 other countries, suffers the effects of unilateral coercive measures that subject it to shortages and dispossession, increasing the risk of collapse in the face of the pandemic, so the disaster caused by its bad internal policies is not the only way in which the new coronavirus serves the country of the North to expand global chaos.