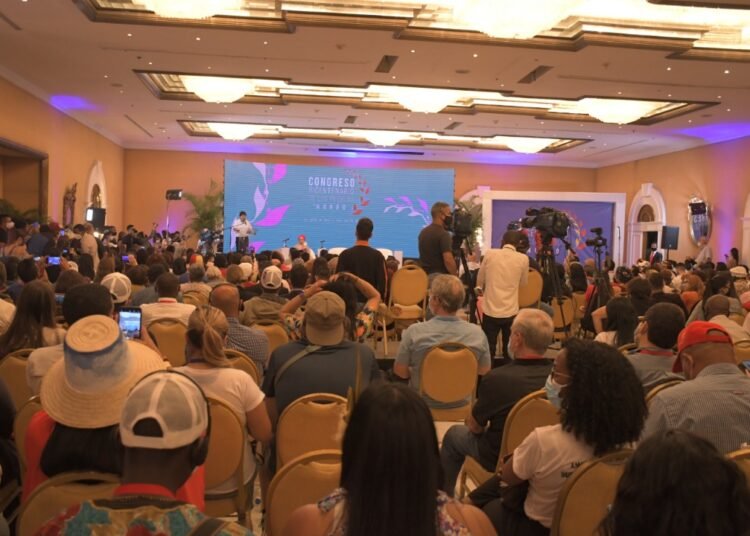 ”The Freedom of the New World is the Hope of the Universe.”

Capitalism is experiencing a systemic and multidimensional crisis. Humanity is suffering the economic consequences of this crisis and especially, its effects on people with less purchasing power. The COVID-19 pandemic has enhanced the crisis, increased social problems, and displayed the injustices of the neoliberal dogma. Policies to counter COVID-19, implemented by governments that defend neoliberal capitalism, have placed humanity in danger.

The management of the global health crisis within neoliberalism’s prevailing framework and its rationality based on capital accumulation has deepened inequalities, expanded poverty, and increased unemployment; evictions and social exclusion have worsened. The speculative voracity of Western pharmaceutical corporations, coupled with the prevailing struggle between world powers for the production and acquisition of COVID-19 vaccines, has reaffirmed the inhuman character of the capitalist mode of production, the decline of the Western civilizational model, and the ethical collapse of a system of domination articulated in terms of profit maximization.

US hegemony is in decline. Its ruling classes and elites are deeply fractured. Its economy is suffering a severe depression while losing key markets. US military interventions in Asia have failed; the European Union is distancing itself from some of its policies and, furthermore, the US now faces the political-military challenge of the emerging world powers.

Neoliberal globalization has become the strategic bet of the US to preserve its domination. Imposing its economic model is imperative for the defeat of its adversaries. The ”Provisional National Security Strategic Guidance” explains the hegemonic intent of the Biden administration. Humanity is already suffering from the actions of the White House that have been deployed in the economic sphere, in the dispute over geostrategic areas, the control of technologies such as 5G, in military attacks, in various aggressions aimed at maintaining its supremacy and in the reinforcement of NATO.

The strategizing of NATO, the military arm of neoliberal globalization, is a danger to peace since it violates the sovereignty of nations, perpetrates armed aggressions against people and creates conditions for a confrontation that potentially carries nuclear risk. Its prospect of expansion beyond the North Atlantic, towards Eastern Europe and Latin America, as well as the encirclement of Russia and China denotes a danger to the entire world.

Currently, dispossessing other nations of their territories shows its determination to seize and control, by any means, the essential minerals for new technologies, sources of water, energy and biodiversity. The dispute over these common goods marks the present international order and is a motive for the neocolonial campaigns of the great powers. Without a doubt, imperialism is the main threat to humanity. Its policies are extremely destructive for Mother Earth, threatening life, stimulating hatred, undermining peace and suppressing the self-determination of nations.

Its model is built on the exploitation of the working class, the domination of native peoples, a patriarchy that perpetuates the subjugation of women, the tolerance of child and adolescent slavery, the reaffirmation of the feminization and racialization of poverty that derive from supremacist conceptions that injure human dignity. The contempt for sexual diversity, people with disabilities and the segregation of poor migrants are examples of a model that denies human dignity. The powerful try to ”naturalize” this order and castrate human creativity through their media corporations and social media networks. The cultural industry of capitalism insists on shaping collective imagination and imposing its rationality. It involves multiple forms of control, diverse power relations and varied legitimizing mechanisms that uphold an unjust world order.

In Our America [Nuestra América], a region plagued by US Southern Command military bases, a momentous geopolitical battle is taking place. The Bolivarian ideology sparked a wave of changes aimed towards a second independence of the peoples of Latin America and the Caribbean. The White House has revamped its Monroe Doctrine to colonize the continent once again. The shipping channels, Antarctica, the Amazon, oil, biodiversity, gas, water, and other natural resources are the strategic objectives that animate US strategy. It is an orchestrated plan of looting that impacts our cultures as well, through theft of ancestral knowledge, privatization of the genetics of ancient peoples, and a collective erasing of memory.

The update of the Monroe Doctrine is part of a global plan that is expanding throughout the world. Transnationals, mercenaries and secret service agencies are tearing Africa apart. Western ships are taking over Oceania. A gigantic arc of tensions and conflicts runs from the Arctic to the Kamchatka Peninsula, passing through the Hindu Kush and the Himalayas. They are trying to Balkanize Eurasia, exterminate Syria and Palestine, prevent the recovery of the sovereignty of the Sahrawi Arab Democratic Republic, defeat Iran, enslave the Indian Ocean, humiliate Vietnam and the Democratic People’s Republic of Korea, chain the Philippines, remilitarize Japan. All of this is a plan to impose American supremacy, without considering the wishes of the majorities of the world.

Humanity demands an alternative to the destruction of our planet, to capitalistic exploitation and the social injustices of the current order. Our America joins this clamor, where the historical massive mobilizations of the peoples of Chile, Haiti, Colombia and Brazil stand out. This, coupled with the return of the Movement towards Socialism to the Casa Grande del Pueblo of Bolivia in 2020, as well as the recent political-electoral triumphs in Chile, Peru and Mexico, all point towards a new and hopeful situation for the continent. A new world germinates in the resistance of West Asia and in the changes promoted by the popular forces and the revolutionary or progressive governments of Our America. The exercise of a sovereign foreign policy of the emerging powers and their solidarity with other peoples is a a key element in the organization of a new age.

The world is moving towards a new direction. Humanity fights to protect its diverse world views, cries out for its cultural diversity to converge in a new world order where other worlds become possible but the current one will be impossible. The liberation of the peoples is subject to the possibility of building a new world order characterized by a rainbow of sovereign nations and social projects based on justice and solidarity. The current reality demands an understanding of the diversity of struggles in a decided commitment to new models of human coexistence. Emancipation must also be the making of new worlds. The future demands from us the preservation of life.

The Bicentennial Congress of the Peoples of the World is inspired by this dream. It is a collective effort based on life. It is a stake against colonialism that is still powerful, and it accompanies the struggles of the peoples for their sovereignty. This Congress bases its hope for the future on the historical memory of nations and calls for unity in the face of imperialism. Uniting our peoples cannot be postponed in the face neoliberal globalization. It is essential for us to transcend solidarity and to develop a committed internationalism capable of coordinating our struggles, retaking the initiative of a peoples-based agenda and changing the correlation of forces in the favor of the peoples of the world.

Two hundred years after the Battle of Carabobo, we continue on the course charted by the Liberator Simón Bolívar, to strive for the ”greatest amount of happiness possible” for our peoples. A more just world where there is no lack of food, freedom, health and joy, today requires fighting for the self-determination of the peoples and assuming internationalism as an inalienable duty. That world was dreamed by Commander Hugo Chávez and this Congress is committed to work to make it come true.

With this in mind, the Bicentennial Congress of the Peoples of the World declares that:

– We support all initiatives to eliminate COVID-19 vaccines patents, boost vaccine production and distribution from a rationality centered on the preservation of life and consequently of progress towards achieving a global vaccination plan with solidarity, equity and social justice.
– We condemn unilateral coercive measures and other criminal aggressions perpetrated against the Bolivarian Republic of Venezuela, Cuba, Nicaragua, Mozambique, Zimbabwe, Iran, Russia, Syria, Palestine, Yemen, the Democratic People’s Republic of Korea, the People’s Republic of China and other nations of the world.
– We express our solidarity with the right of self-determination of Western Sahara, the last colony in continental Africa, subjected to a war imposed by Morocco. We recognize their legitimate struggle for the full recognition of the Sahrawi Arab Democratic Republic.
– We denounce the proliferation of US military bases in Latin America and the Caribbean as well as US military deployment in the region, since this constitutes an attack on the peace and self-determination of the peoples of the region.
– We support the just demand of Argentina regarding its sovereign right over the territories of the Malvinas Islands.
– We demand that US imperialism ceases its aggressions against Venezuela and that it returns the usurped wealth of the Bolivarian Republic of Venezuela to the Venezuelan people.
– We condemn neocolonial initiatives that harm the sovereignty of the peoples of Africa.
– We express our solidarity with the people of Puerto Rico, Galicia, the Basque Country, Catalonia and the Canary Islands in their legitimate struggles for self-determination.
– We call on the citizens of the world to join forces to fight to preserve life, safeguard peace, defend the sovereignty of the peoples and build new models of human coexistence through the development of an AGENDA 2021-2030 of the peoples of the world.

Likewise, the Bicentennial Congress of the Peoples of the World agrees:

– To seek development based on the geographical and specific characteristics of each region, a political-ideological training system that articulates the different experiences conceived by the political and social organizations participating in this Congress.
-To Articulate the different communication efforts of political parties, social movements and other popular organizations for the production and dissemination of media content on the Hugo Chávez International Communication Platform.
– To Constitute delegations of communicators by sector and by the participating nations of the Bicentennial Congress for their incorporation as students in the plans of the International University of Communication.
-To Create and / or strengthen the organizational structures and other mechanisms of articulation approved in the discussion roundtables by the political parties and social movements attending the Bicentennial Congress, in order to comply with the combat agendas adopted in said roundtables and to implement the decisions reached in the plenary session of this Congress.
– To establish a center for strategic thought, constituted by the political parties and social organizations attending this Congress, capable of constructing a subjectivity in accordance with the liberation of the peoples of the world and the emancipation of the human condition.

This has been approved in the city of Caracas, cradle of the Liberator Simón Bolívar and capital of the Bolivarian Republic of Venezuela, on June 23, 2021.

Featured image: A session of the Bicentennial Congress of the People’s of the World. Photo: PSUV.