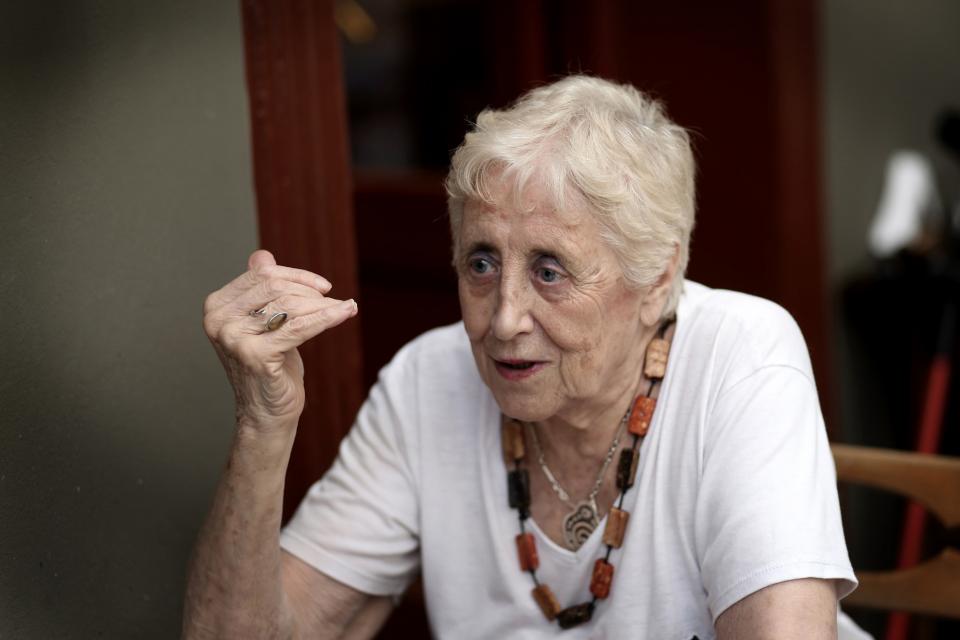 “In Bolivia there is no longer any security to hold free elections,” says Calloni. Image Daphne Gentinetta

The writer and journalist, author of this essential research, analyzes the situation in Bolivia, in the context of the interference of the United States in the region.

The civic, police and military coup d’état perpetrated last month in Bolivia demands a political, social and economic reading of recent events in Latin America, an analysis that transcends theoretical prattle. For this reason, beginning this Sunday, Página/12 will provide its readers with an updated edition of Evo in Focus. The CIA and DEA in Bolivia, is one of the classic research works of the writer and journalist Stella Calloni.

“It is amazing how many analysts deny the role of the United States as the architect of the current coup,” writes the author in the new introduction in which she demonstrates how the word “fraud” issued by the Secretary General of the Organization of American States, Luis Almagro, was the signal expected by Washington to finally remove Evo Morales from power, the first indigenous president of that country.

Calloni’s work gives an account of the manual of the colonization of Latin America undertaken by the United States together with its intelligence and related organizations: the CIA, the DEA, and, among other actions, the recolonization of the continent launched since the coup against Lugo in 2012, Macri’s victory in 2015, the coup against Rousseff in 2016, and Bolsonaro’s government in 2019. As Adolfo Pérez Esquivel points out in the prologue: “In this book the essence of colonialism and neocolonialism that prevailed throughout the twentieth century is revealed, frustrating the process of independence, as is happening throughout Latin America”.

What did the declaration of the first plurinational republic by the government of Evo Morales mean in the international political context?

Of course there are other important meanings, but the greatest transformation that took place was the inclusion of indigenous peoples as subjects with rights. It is necessary to consider that in that country there existed a true apartheid, as was happening in South Africa, a racism of brutal characteristics that is being expressed these days, with the active participation in the coup produced by the segregationists: racist groups, fascists, separatists from Santa Cruz de la Sierra, Beni and Pando, which make up the Crescent. In the new Constitution, approved by referendum with 61% of the votes in January 2009 and promulgated on February 7 of that year, it was determined that Bolivia was a “Unitary Social State of Community Plurinational Law, free, independent, sovereign, democratic, intercultural, decentralized and with autonomies, founded on plurality and political, economic, juridical, cultural and linguistic pluralism within the integration process of the country”. This meant a “refoundation” and the beginning of the process of change from a colonial and neoliberal State to a Unitary, Plurinational and Decentralized State with Autonomies. The original peoples became subjects with civil rights and the authority to exercise their own autonomy, producing a fundamental change.

Yes, but a transformation of that magnitude takes time…

Of course, the road taken was a long way to go because cultural and political change, decolonization, is a gigantic task, a long-range daily struggle. What the world saw in recent days was racist, ruthless and cruel violence on the part of the coup plotters, the “civics,” who are actually paramilitaries of all past dictatorships along with the security forces.

Is there a common thread linking the nationalist projects of the MNR, in the 1950s, with the MAS, or did the popular government of Evo Morales set political and social milestones of significance and overcoming achievements?

There are always threads in these types of experiences. The 1952 revolution was an extraordinary process in those moments, the expropriation of hydrocarbons, the announcement of the Agrarian Reform, the popular militias, and especially the heroic struggle of the miners that transcended the world and unveiled a Bolivia hidden among the tangles of the so-called “mining thread”: the Patiño, Hochschild and Aramayo, the great tin barons. Without a doubt, this memory is indelible. A process that lasted from 1952 to 1964 and that is inevitable to relate it to the steps taken by Evo Morales in several aspects, especially with the nationalizations and the great mobilizations of 2003. Just as the Revolution of ’52 was the result of multiple experiences of struggle by the Bolivian people, the Morales government managed to take giant steps producing a 180-degree turn in the future of Bolivian history, at a very different regional political moment from the one that surrounded the 1952 revolution. There would be much more to explore.

Are there any differences to consider between the actions of Bolivia’s far-right elites and the behaviour of the other Latin American oligarchies?

One of the key differences is the racial problem that characterizes Bolivia, and which is expressed in other countries as a bitter aftertaste in our region. Added to this is a primitive fundamentalism with specific characteristics. The passage of such sinister characters as Klaus Barbie, the so-called “butcher of Lyon”, and other German and Croatian Nazis through the Santa Cruz area left not only an indelible mark, but also threads and networks with the intelligence services and drug trafficking on a large scale. In 1986 was discovered in Huanchaca, a laboratory to produce cocaine that was under the control of none other than the CIA and the DEA, which sent it from there to the U.S. Southern Command in Panama, with final destination in Miami, Florida. It was part of the so-called “narcogate,” when U.S. colonel Oliver North led operations to exchange drugs for weapons for the Nicaraguan counterrevolution in the U.S. covert war against Sandinista Nicaragua. By investigating the business of people like “civic” Fernando “Macho” Camacho, and other “businessmen” and the new “rosca” of the powerful of Bolivia, we would have a very clear picture of what the Bolivian elites are and their political relations with governments like Brazil, Argentina and others considered “legitimate” by the powerful Mike Pompeo.

You emphasize the long process of liberation and independence of Latin American peoples. In what sense do the categories of left- and right-wing European democracies lack the analytical validity to understand the anti-imperialist struggles of national, popular and democratic inspiration?

European democracies can barely understand the anti-imperialist struggles of our region, because, in fact, they do not consider the issue of dependence on the United States that has marked our relations since the end of the nineteenth century, throughout the twentieth century and into the twenty-first. It is very difficult, if not impossible, to establish a profound democratic process in our region in conditions of dependency. For this same reason, the integration project that had advanced until 2011 to establish the Community of Latin American and Caribbean Nations had an emancipatory imprint tending to definitive independence. After President Donald Trump assured in a speech that they were currently applying the Monroe Doctrine of 1823 in Latin America, a colonialist par excellence, no one can doubt that we are undergoing a counterinsurgency war with a geostrategic project to recolonize our region. The coup in Bolivia, like the other coups we have suffered in recent times, is part of that project. Neoliberalism is an instrument to weaken our national states.

If it is true that the strength of the Bolivarian government of Maduro in Venezuela would be centered on the support of its armed forces, why did the Morales government only find in the security forces and the army the de facto architects of the coup?

The history of both countries has some elements in common, although there are substantial differences. First, the emergence of Lieutenant Colonel Hugo Chávez Frías in Venezuela in 1992 at the head of a civic-military uprising and who would become president in the 1998 elections constitutes a different situation. Later, under Chávez’s leadership, they formed the Bolivarian Armed Forces, which not only accompanied him but also confronted the coup aided and financed by the United States (together with Venezuelan businessmen and some military), which took place on April 11, 2002. It was an alliance of the people in the streets and the loyal armed forces that defeated the coup in just over 48 hours. In Bolivia, on the other hand, U.S. interference – as I show in the book – was so profound that it had the highest level of infiltration in the police forces, and of course, in the army as well. While President Morales expelled the DEA, then the CIA and Ambassador Philip Goldberg in late 2008 (for their participation in the coup in September of that year), he faced permanent action by the U.S. embassy, as documented in the book. The arrival in power of Macri, and then Temer – through the coup against Rousseff – added to Bolsonaro’s triumph, and not forgetting Piñera’s presence in Chile, facilitated penetration into Bolivian military sectors and also the entry of “special” forces and weapons across the permeable borders of these three countries, and also of Paraguay. This was the great impulse for the coup that was already prepared as seen in the pre-electoral manoeuvrers of the OAS, the U.S. Congress and other organizations.

How do you analyze the immediate political future in Bolivia after the coup?

It is very complex. There is no longer any security to hold free elections. U.S. Secretary of State Mike Pompeo has clearly stated that he will only recognize governments that they consider “legitimate”. That is, like the self-proclaimed president who emerged from the coup in Bolivia, the “legitimate” self-proclaimed president of Venezuela, Juan Guaidó, and any government that responds to their interests in the region. It will even protect those leaders who are “threatened” by just popular protests as is happening in several Latin American countries, thus supporting the brutal repressions that are taking place in the continent. If MAS wins in Bolivia in those elections that will be held with a gun to the heads of the citizens, would the triumph be recognized, if so far they maintain that Morales did not win?

What kind of danger does the figure of Evo represent for the United States today?

The leadership of Morales, like that of Álvaro García Linera, and the government team, will always be considered “a danger to the Security of the United States,” a euphemism used to persecute all those who “dare” to defy their interests, those who have become in recent times the true leaders of an emancipatory process that will be inevitable. The most important aspect of this difficult period is the imperial unmasking. In this context, there are no more disguises.