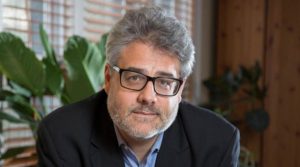 The American lawyer and peace activist visited Donetsk where, he says in this interview, the Ukrainian army bombed a school, a football stadium and a monastery, without the Western media reporting these war crimes. The author of the book “The Plot To Overthrow Venezuela, How The US Is Orchestrating a Coup for Oil” reveals that the US military is directly involved in the war in Ukraine. Interview.

Mohsen Abdelmoumen: You are in Russia at the moment and you are following the conflict in Ukraine. Can you give us an update on the situation in the field?

Daniel Kovalik:  I was in Donetsk and can say that the situation there is very stable. While there was some shelling by Ukraine into this area upon civilian targets (eg, a school, soccer stadium, a monastery), life is now slowly returning to some state of normalcy subsequent to the referendum in September in which voters thing to become apart of the Russian Federation. Russia is engaged in the construction and reconstruction of housing, hospitals, parks and other infrastructure, and people are going about their daily lives.

You assert that there are American troops engaged on the ground in Ukraine. How do you explain this engagement of American troops? Don’t you think this is a serious precedent?

This is a very serious situation indeed. While the Biden Administration claims that these troops are not involved in actual combat, the presence of these troops and their aid to the Ukraine military in training, advising and targeting underscores that this conflict is one between NATO and Russia. In short, this is a signal that World War III has begun, and a greater conflagration has now become very possible.

In your opinion, are we heading for a global conflict and a nuclear war?

We are certainly closer to a global conflict and nuclear war than we have been since the Cuban Missile Crisis of 1962. But the difference is that during the Cuban Missile Crisis, both the USSR and the US were dedicated to finding a negotiated solution to the crisis quickly in order to avert war. Ultimately, the crisis was resolved in a matter of days with both sides making concessions to the other. In terms of the current conflict, the US has made it clear that it does not want to find a negotiated resolution or to give any concessions to meet Russia’s security concerns. This makes the current situation even more dangerous.

Why do the United States and the Europeans want to support the Ukrainian government at all costs? What are the real reasons?

From the West’s perspective, and in particular the perspective of the US which is calling the shots, this conflict is all about weakening and possibly destroying Russia. Statements by US officials and the Rand Corporation make it clear that the US is simply using Ukraine as a vehicle for undermining Russia, just as the US used the Afghan war to undermine the USSR. The US is willing to fight to the last Ukrainian to achieve its goal of weakening Russia.

The European Union’s sanctions against Russia have proven to be ineffective. Do they still make sense today and why is Europe following the United States to the point of harmonizing its people who live in the most precarious conditions?

The EU’s compliance in going along with these sanctions is devastating Europe. The people of Europe will suffer greatly this winter from high energy costs, if they can get energy at all, and countries like Germany are actually losing industries as a result of the sanctions. These sanctions make absolutely no sense for Europe and are harming it greatly. Indeed, it is now clear that the US intends to hurt the EU as much as Russia from these sanctions. The US views the EU is just another competitor in the capitalist economy, and is happy to see the EU suffer decline from all of this.

Some countries consider themselves above the law, such as Israel, which occupies the Palestinian territories and engages in the permanent massacre of the Palestinian people, and Morocco, which occupies and plunders the territory of Western Sahara and oppresses the Saharawi people. We saw the vote at the UN demanding the ending of the blockade against Cuba, countered only by the United States and Israel, which voted for the continuation of the blockade. Do we still need an organization like the UN? Shouldn’t we go beyond the UN and create another organization that will be more just?

We certainly need an international organization which has the will and the ability to hold all countries accountable for war crimes and human rights violations. The current international law sadly fails in this regard as it is applied only against the weaker countries while allowing the stronger countries to literally get away with murder. We need a new international order which will hold the powerful to account as much as the weak. Otherwise, this is no true international order at all.

Vladimir Putin is building another world freed from US hegemony, a more equitable multipolar world. Don’t you think that this is the only way for humanity to save itself?

I agree that the only way forward is through a multipolar world in which the power of the US is greatly checked and curtailed. Since 1991 and the collapse of the USSR, the US has had virtually unchecked power, and it has used this power to wage wars of aggression throughout the world, thereby undermining the peace and security of entire nations and regions. The US has also used its economic dominance to starve countries which it disagrees with. This must end, and the only way this ends is with a world in which equally-powerful countries challenge the US and provide other countries with alternative trading partners.

We noticed during this special Russian operation in Ukraine that the media misinform by permanently broadcasting US propaganda and the discordant voices are forbidden to express themselves while the West does not stop singing us human rights, freedom of speech, democracy, etc. Don’t you think that this conflict has shown us the ugly face of a fascist West?

I do think that the hypocrisy and blindness of the West has been exposed by all of this. This conflict in Ukraine could have been easily avoided by the West’s making very minor concessions to Russia’s reasonable security concerns, but the West, and especially the US, refused to do so because they believed they could simply bully Russia into submission. And now, those who point out the obvious facts about the conflict and about how the West provoked it are being censored and quieted. Any liberal notions of free speech are now giving way to more authoritarian measures in the West, with dissenters being denied their livelihood and being threatened with imprisonment for simply speaking the truth. The West is now dead .

How do you explain the fact that the West is plundering Russian assets to give them to Ukraine, as they stole Libyan assets? Isn’t this piracy on the part of the West? Don’t we live in a world of corrupt and pirates?

The West is now engaged in old-time colonial theft and pillaging throughout the world without the smallest fig leaf of legal justification. Not only has the West stolen $300 billion of Russia’s reserves, but the US has stolen $7 billion from Afghanistan; the US continues to plunder Syria of its oil; the US simply stole Venezuela’s US-based oil company CITGO and is now selling it off in pieces; and the UK has stolen $1 billion in Venezuelan gold. For the West to even talk about international law and due process is a cruel joke. The West has destroyed all semblance of international law and we now live under the law of the jungle.

My country, Algeria, which is a permanent target of US imperialism and its satellites, has been attacked by some neocon senators, including Marco Rubio, and deputies for having links with Russia, particularly through the purchase of weapons. These senators and deputies have called for sanctions against my country. In your opinion, when will the West with the United States at its head stop interfering in the affairs of other countries?

The West will only stop interfering in other countries when they simply cannot do so by virtue of economic and social collapse within the West. I think this time is coming soon. Living in the US, I do not relish this fact, but it is undeniable that the Western way of life is unsustainable and that the West will soon face its comeuppance.

How do you explain the corruption of Western political leaders who crush their peoples and engage in a suicidal war against Russia?

This can be explained by the fact that we now live under a regime of totally unrestrained capitalism in which the profits for the few are given precedent over the needs and well-being of the vast majority of people in the world. When the USSR existed, it played a moderating role on this, but since its collapse, the worst tendencies of capitalism have come to predominate. This has brought the entire world to the verge of destruction.

You know Latin America very well. Cuba and Venezuela continue to suffer from the empire’s attacks against them. What is your analysis of this?

Cuba, Venezuela and Nicaragua too are suffering from a relentless economic war being waged upon them by the US. Numerous international experts and bodies have condemned this assault as a violation of human rights and international humanitarian law norms as it targets the most vulnerable in these countries by denying them life-saving necessities such as food and medicine. Literally millions of people have died needless deaths in these countries as a result.

In your opinion, isn’t there a need to build a global anti-imperialist front that will put an end to the vile, corrupt and criminal oligarchy that rules the world?

Building such an anti-imperialist front is indeed the most pressing need of the peoples of the world today, and it is already coming into being. It is this which gives me hope.