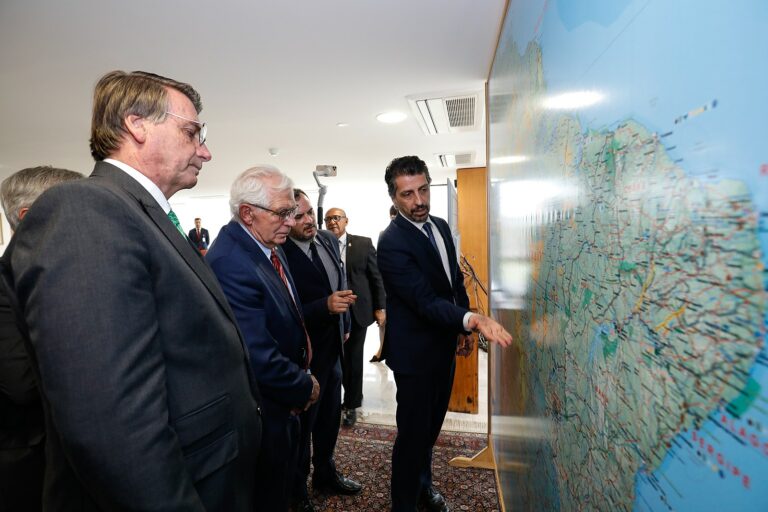 Europe’s assault on the rest of us, who were exterminated and expropriated, millions who were enslaved and died resisting European occupation, continues today – recently, and graphically, re-stated by the European Union’s top diplomat Josep Borrell. Eyob Gebremariam exposes the language and practice of coloniality, which sustains inequalities at the global level and has done for nearly 500 years of European empire-building.

In October this year the European Union’s top diplomat Josep Borrell praised Europe as a “garden” and bashed the rest of the world as a “jungle”. By claiming Europe as a “garden” of freedom, prosperity and cohesion, Borrell is equally asserting that the rest of the world is a jungle of repression, destitution and division. Borrell is affirming that these so-called “Western values” are the fruits of European “civilisation” and “development” are non-existent in non-western societies because the jungle is uncivilised and undeveloped. It appears that Borrell was not aware that his speech was recorded. He wanted more private discussions with his audience where he could have an uncensored discussion without the “jungle” listening.

If we look closely, Mr Borrell’s speech did not only distinguish between the physical and geographical places per se. He also emboldened the difference between the Western white man capable of rational thinking and the non-western “savages”. Borrell is immortalising the hierarchisation among human beings, building on the Cartesian logic of “I think; therefore I am”.

The unstated assumption of this Cartesian logic is that others do not think or do not think properly; therefore, they do not exist, or their existence can be disregarded. The residents of the garden “think”, and they achieve civilisation and modernity. Those from the jungle are incapable of “thinking” and are masters of and subject to “the laws of the jungle”.

A decolonial orientation recognises and challenges the overarching Eurocentrism that informed Josep Borrell’s speech. The language Borrell used is not accidental. It is a well-thought and rationalised standpoint. His thoughts are deeply embedded in the EU’s ideologies, institutions, policies, and practices. Indeed, Borrell underscored that emphasising the difference between the garden and the jungle is “the most important message” of his speech.

Borrell suggested that the gardeners must protect against the “invasion” of the garden by the unthinking savages. However, he insisted the garden cannot be protected by “building walls”. Instead, Borrell demanded the gardeners “to be much more engaged with the jungle”. I bet if someone used a time machine to travel back to attend the infamous 1884 Berlin Conference, the tone and orientation of the discussion would be the same, i.e. to exploit and subjugate the jungle.

In this blogpost, I aim to explain how the logic and imperatives of colonial relations remain constitutive parts of the ideologies, institutions and practices of pursuing “development” and “science” in Africa. Using the concept of coloniality, I argue that one of the fundamental starting points to challenge the forms of present-day colonial relations is to recognise and acknowledge their existence. Coloniality is deeply embedded in shaping socio-economic, political, cultural, and intellectual relations across the world, particularly in Africa’s relations with the so-called “Global North”.

The West and the rest

Africa’s relations with Europe can hardly be detached from the multiple manifestations of coloniality. Coloniality is the sustained inequities and power asymmetries at the global level that stem from nearly 500 years of European empire-building. The notion of coloniality enables us to uncover the camouflages of imperialism which are often depicted and narrated from Eurocentric standpoints.

Socio-historical and political processes broadly categorised as “civilisation”, “progress”, “development”, and lately, “the spread of democracy and human rights” served as vehicles of coloniality. From the standpoint of Africans (and also Asians, Aboriginal peoples and indigenous peoples of the Americas), the above socio-historical and political processes caused the dehumanisation of non-Europeans, exploitation, genocide, the destruction of knowledge and seemingly permanent subordination to the socio-cultural and political interests of the West/Europe/the ”Global North”.

The legitimacy, credibility and value of African societies, their products and social relations have been consistently and systematically delegitimised, discredited and devalued. As a result, Africa’s position in the global science and research ecosystem remains negligible. Africa constitutes approximately 10 per cent of the global population but contributes to only 0.7 per cent of academic researchers globally.

This is not because there is no knowledge in Africa. It is because the mainstream knowledge production ecosystem is essentially Eurocentric and degrades non-Eurocentric orientations. On the contrary, European societies’ socio-historical processes, inventions and achievements have been celebrated as universal standards, hence superior. Such hierarchisation served the colonial logic and empire-building in the past and present. This was in devastating display in the speech made by Borrell.

Borrell claimed that Europe has “the best combination of political freedom, economic prosperity and social cohesion that humankind has been able to build.” This “best combination” has been packaged as modernisation and development and exported to the “jungle”, particularly since the 1950s. The ideologies, institutions, policies and practices of development embrace this Eurocentric orientation. The institutionalisation of colonial relations between Europe and Africa remained concealed from this narrow interpretation of history. In simple terms, Europe’s economic prosperity is achieved at the expense of the continued deprivation of formerly colonised societies.

Europe’s “economic prosperity” is an outcome of its dominant role in the operations of the “commercial-non-territorial-military empire”. This empire thrives on the exploitation of cheap natural resources across the world, the dominance of the World Bank, the IMF and WTO in controlling and dictating economic policies of former colonies, the military and political intervention of the West into former colonies (coups d’état, assassinations, invasion, bombardment etc).

The Franc Zone is one ideal example of how coloniality sustained plunder and exploitation to benefit Europe at the expense of Africa. The French Treasury controls the entire economic activity of 15 African countries, “members of the franc zone”. These 15 West and Central African countries, including Comoros, constitute around 14 per cent of Africa’s total population. Four of the five least developed countries of the world based on UNDP’s human development index are members of the Franc Zone (Niger, Central Africa Republic, Chad and Mali). The colonial pact that necessitated the establishment of the franc zone was part of the colonially imposed “development model” after “WWII”. The aim was “guaranteeing France’s economic control of the colonies and facilitating their wealth’s drainage towards the economically fragile metropole.“

The Franc Zone illustrates the normalisation and institutionalisation of coloniality. Countries in the “jungle” are made to surrender their monetary sovereignty to enable “the garden” to blossm. Fifty per cent of the foreign reserve of the Franc Zone countries is deposited in the French Treasury, and their fiscal policies are highly constrained because their currencies are pegged to the Euro. As a result, the 15 African countries cannot invest in their economies to enhance their productivity or improve their citizens’ well-being. Instead, their economies remain “adversely incorporated” into unfavourable and exploitative trade relations with Europe (mainly France). The political elites in these countries are benefiting from the system and so have little incentive to challenge the neo-colonial relations radically.

Unless we recognise that coloniality is the order of the day, we cannot see the threads that connect the deprivation of the “jungle” and the prosperity of the “garden”. If we do not see it, we will not recognise it; hence we will not act against it.

“I do not know what a decolonial research would look like.”

On 21 October, I attended a conference at the Royal Society in London entitled African scientists in colonial and postcolonial contexts (1800 – 2000). The conference offered a stimulating scholarly space to reflect on “personal and professional ways in which European science was shaped by colonial and postcolonial contexts”. Most scientific archives hardly recognise, preserve and record the scientific knowledges, contributions and role of African scientists. One of the reasons for this is that Africa has been depicted as a “dark continent” devoid of knowledge. In most cases where African knowledges are recognised, they are often categorised as “traditional” or “indigenous knowledge”; hence particular and provincial. European knowledge is “modern” and, most notably “universal” (relevant and vital, in any context).

“Coloniality of knowledge” is one of the fundamental ways in which the power asymmetries of the empire-building period remained deeply engrained in the present institutions and processes of knowledge production. Peruvian sociologist Anibal Quijano argues that:

In the beginning colonialism was a product of a systematic repression, not only of the specific beliefs, ideas, images, symbols or knowledge that were not useful to global colonial domination, while at the same time, the colonisers were expropriating from the colonised their knowledge, especially in mining, agriculture, engineering, as well as their products and work. The repression fell, above all, over the modes of knowing, of producing knowledge, of producing perspectives, images and systems of images, symbols, modes of signification, over the resources, patterns, and instruments of formalised and objectivised expression, intellectual or visual.

Kenyan scholar Ngugi wa Thiong’o also referred to the coloniality of knowledge by focusing on how colonialism causes the “annihilation” of colonised societies’ languages, cultures, knowledges and belief systems.

A conference concerned with the misrepresentation of African scientists cannot afford to disregard a critical engagement with the notion of the coloniality of knowledge. The papers at the conference presented several insightful cases about how colonial relations shaped and influenced the lives of African scientists and Africans who might not necessarily fall in the category of a “scientist”. However, in my view, most papers fell some way short of approaching colonialism as an epistemological project (a totalising theory of knowledge). One that views colonialism as not only acquiring knowledges from Africa which had relevance to empire-building, but also as institutionalizing a knowledge hierarchy from which colonial forces have continued to benefit.

When the coloniality of knowledge is at the centre of studying the relationship between science and colonialism, the inquiry enables us to go beyond recording the unjust relations embedded in colonial knowledge production. Additional questions may ask how such inequities were cemented during colonisation and how coloniality sustained them.

I spoke with one of the conference presenters about decolonial knowledge production and the limits of Eurocentric perspectives. The person responded, “I do not know what decolonial research would look like.” It was an honest response. This is why I insist that until we recognise that the “coloniality of knowledge” is dominant in mainstream intellectual enquiries, we will not apply truly decolonial perspectives.

Featured Photograph: Meeting with the Representative for Foreign and Security Policy of the European Union and Vice-President of the European Commission, Josep Borrell (4 November 2021).