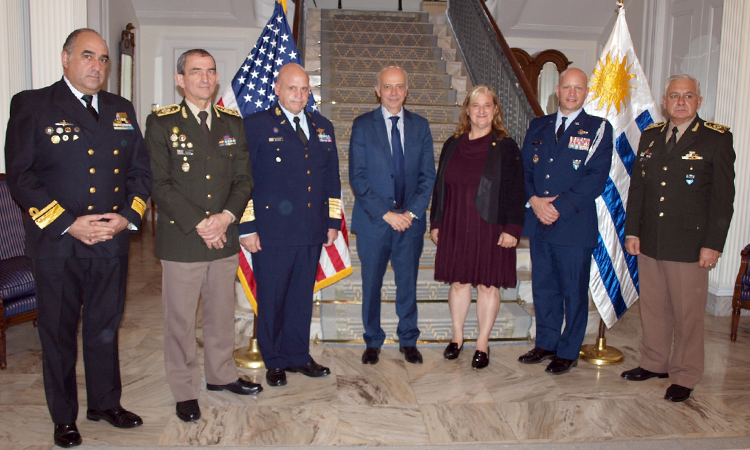 U.S.’s Charge d’Affaires in Uruguay, Ms. Jennifer Savage, hosted a recognition ceremony at the Chief of Mission’s residence for graduates of the U.S. International Military Education and Training Program for 2020 and 2021. Ms. Savage was joined by Uruguayan Minister of Defense Dr. Javier Garcia, military leaders, and more than 55 military and civilian members that support the Uruguayan military.

A draft defence cooperation agreement between Washington and Montevideo, which could allow the installation of US military bases in Uruguay, is once again being considered in the Uruguayan Parliament. Allowing US military bases would effectively damage the sovereignty of Uruguay, a country which currently maintains good relations with both Russia and China.

Senator Gustavo Penadés for Uruguay’s ruling centre-right National Party claimed that the project only involves “some type of investment in construction” and not the permanent presence of US forces in Uruguayan territory. For his part, the president of the Uruguayan Defence Commission and of the opposition centre-left Broad Front, León Lev, admitted that the project is “ambiguous” and will instigate “profound discussion” in Parliament.

The project is defined as “a complementary agreement” for “reciprocal provision” of “logistical support, supplies and services.” It says that Uruguay and the US express their “desire to improve the interoperability, preparation and efficiency of their respective military forces through greater logistical cooperation.” In addition, the purpose of the agreement is to “facilitate logistical support” between the two countries during “combined exercises, training, displacements, stopovers, operations or other cooperative activities.”

Effectively, it is very clear that the bilateral agreement will in fact enable US actions more than anything else. For example, the supply of services that can be provided to each other in reality only benefits the US as Uruguay does not have the capacity to do military missions or operations in North America like the US does in South America. It cannot be overlooked that the initiative is from the US and is drafted in the terms that it proposed.

The project was first discussed in 2012, during the government of José Pepe Mujica, but it did not have the support of parliament. Today, just like in 2012, if the parliament authorises it, it would mean a loss of Uruguayan sovereignty over a part of its territory.

According to Senator Penadés, there is no possibility of US bases in Uruguay and he believes that this interpretation of the agreement is incorrect. The legislator claimed that it is a “standard agreement” like the ones that have been signed between the US and other countries on defence cooperation. When asked what the project refers to when it says “operations in bases [and the construction corresponding to that support],” Penadés said it is about the “infrastructure” that is built in “cooperation,” such as, according to him, hospitals.

For his part, Lev affirmed that the project is “ambiguous” and will provoke “very deep discussion” in parliament.

“As it is ambiguous, it is going to give rise to at least a very deep discussion, I have no doubt. This is not going to be voted on tables and this discussion is going to take many months, if not years. But one can never anticipate,” he said, adding: “There are two main laws for the Government, such as the organic law of the Armed Forces and the retirement law. Parliament is not in a position to quickly study this project.”

Lev pointed out that, in general, agreements with foreign countries take months or years to approve.

“An issue of this nature, with the ambiguities, especially with this potential base, is going to generate a deep debate. The Uruguayan government does not propose the agreement, it makes a scheme with the US and proposes what Washington aspires to. But in politics one should never rush. One has to carefully analyse and see the actions of the political system,” Lev said.

The underlying issue is that the Uruguayan military’s limited defence budget means that it is reliant on the generosity of donor nations. In one example, the US State Department GPOI funds contributed $36 million since 2008 in equipment, training, and construction for the Uruguayan Armed Forces. This is evidently a paltry amount, but in the context of the Uruguayan military, which has a total budget of $1.16 billion, it is significant.

It is recalled that Daniel Castillos, Uruguay’s Ambassador to Moscow, announced in April that his country does not support the economic sanctions on Russia.

“Despite the current situation and criticism regarding [Russia’s] special military operation [in Ukraine], Uruguay has not imposed and does not support any economic and financial sanctions against Russia… and maintains an interest in strengthening trade and maintaining good relations,” he said, adding that it was “necessary” to cooperate with Russia.

For the US, it is important that initiatives like the defence cooperation agreement are signed with Uruguay so that the country can be brought under its sphere of influence. Uruguay currently has friendly relations with the US, Russia and China, but Washington hopes to upset this balance by slowly influencing the country, beginning with military bases. For now, although the US undoubtedly has ambitions for military bases in Uruguay, it appears unlikely to happen in the short and medium term.