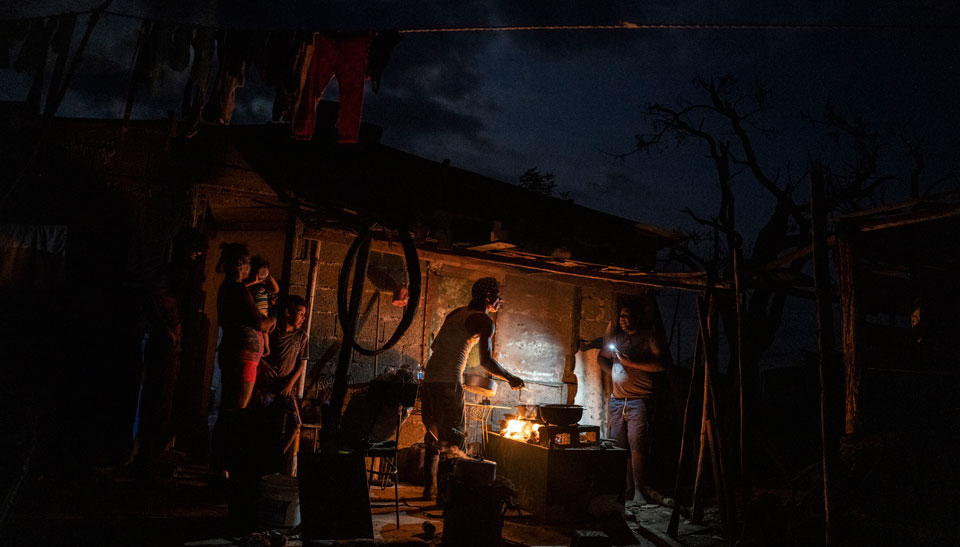 Lights out: The Ramos family cooks dinner over a fire outside their storm-damaged home a week after Hurricane Ian knocked out electricity to the entire island, in La Coloma, Pinar del Rio province, Cuba, Oct. 5, 2022. The hurricane was another blow to an economy already struggling to survive under the weight of the U.S. blockade, the pandemic, and internal corruption and policy failure. | Ramon Espinosa / AP

NEW YORK—A long-running show played out in the United Nations General Assembly once more on Nov. 3 as the nations of the world for the 30th year voted overwhelming to approve a resolution calling for an end to the U.S. economic blockade of Cuba.

The vote was 185 nations in favor, two opposed. As usual, the holdouts were the United States and Israel. Two other U.S. allies, Ukraine and Brazil (for now still governed by the administration of Jair Bolsonaro), abstained.

Cuba has withstood the blockade for 60 years, so long as to equal one-fourth of the years the U.S. has existed as a nation. In that time, Cuba has lacked the resources and powerful allies that might have forced the U.S. government to backtrack.

Cuba instead has had to rely on ideals, high principles, and widespread consensus in its favor, epitomized by the yearly votes in the U.N. General Assembly. The blockade is cruel, immoral, unfair, and illegal under international law. Even so, an opportunistic and powerful U.S. ruling class has not budged.

The U.S. blockade will not end soon, inasmuch as U.S. law assigns the task of reversing it to the Congress. Another way for the blockade to possibly go is for the original outcomes envisioned by U.S. State Department official Lester Mallory in April 1960 to have worked their way. The U.S. government, through the blockade, was seeking “economic dissatisfaction and hardship,” “hunger,” “desperation,” and “overthrow of government.”

Except for the last one, these policy goals are far advanced in being realized, and a crisis may be at hand in Cuba.

At a press conference on Oct. 19, Cuban Foreign Minister Bruno Rodriguez explained how the workings of the blockade led to those results. He noted that between August 2021 and February 2022, Cuba suffered a loss of $3.8 billion, which “is a historical record for such a short time.” Losses over six decades amount to $154 billion. With inflation, that’s $1.391 trillion.

The U.S. government designates Cuba as a terrorist-sponsoring nation. That means foreign companies and financial institutions face severe U. S. penalties if they handle dollars in transactions with Cuba. U.S. dollars are the principal currency used in international monetary transactions. As a result, Cuba’s income from exports is reduced, and international loans are largely unavailable.

Without much money to pay for imports, Cuba experiences shortages of food, spare parts, raw materials for drug manufacture, and all kinds of supplies and equipment. Rodriguez mentioned long lines and “anxiety among the population.” The blockade affects “every Cuban family,” he said, and the government cannot “guarantee medicines that an ill person requires.”

“Cuba can in no way…buy technologies, equipment, spare parts, digital technologies, or software containing more than 10% U.S. components.” The blockade has aggravated difficulties caused by “international crises,” inflation, and lingering effects of the COVID-19 pandemic.

Blockade restrictions “gravely hinder our fuel purchases by making them…[up to] 50% more expensive.” Electrical power generation “is going through an extremely serious situation” because of unavailable replacement parts. Blackouts bedevil Cubans every day, and restoration of electrical power in hurricane-damaged Pinar del Rio has been slow.

People’s World correspondent Richard Grassl visited Cuba recently with his wife, who is Cuban. He recalls conversations touching on shortages, distress, and uncertainty as to who is to blame. He writes:

Oct. 16: Talked to first cousin of wife… He told me I will learn the real Cuba this time. He says not to believe what the Cuban government says about the U.S. blockade. There are many lies. My wife’s nephew says the economy is “nothing. Many Cubans think the blockade [itself] is secondary to issues of daily living like [shortages of] food, medicine, water, and lack of opportunity because there is no money.

Oct. 17: I asked him where most food for Cubans comes from and about food imports. He said most food comes from Miami. [President] Diaz-Canel gets some blame for the situation.

Oct. 18: There is not much social distancing, as the times are urgent.  Food, consumer goods, fuel, construction materials are very expensive. Eggs are $8 USD per dozen. The exchange rate is 80 CUP per USD, which is 4x higher than before COVID-19. No one talks about the blockade. The problem is scarcity of money.

Oct. 19: I talked with a friend. He says the U.S. has so much and we have so little. He asks why there cannot be trade?  …  At several bodegas and public markets, many people, perhaps hundreds, waited all day for cooking oil, rice, beans, chicken etc. at prices subsidized by government.

Oct. 20: I talked to another cousin from Matanzas who said the economy is “on the floor.” It is very hard with little money. A round trip from Matanzas to Havana (500 km) was $500 CUP/person one way or $2,000 round trip for both persons by bus.

Former Cuban President Fidel Castro delivered a wide-ranging speech on Nov. 17, 2005, notable for his highlighting of corruption: “This country can self-destruct; this Revolution can destroy itself, but they can never destroy us; we can destroy ourselves, and it would be our fault.”

Similarly, President Miguel Díaz-Canel on Oct. 26 convoked a meeting of Cuba’s Council of Ministers at which a plan was unveiled with “more than 40 directives aimed at confronting crime, corruption, and lack of social discipline.” The report appearing on the presidential website characterized the president’s remarks as “a forthright analysis of illegalities, stealing, and price-gouging imposed on a population with no economic means.”

Both earlier and now, the toxic mixture of shortages of goods and money has led to stealing and lawlessness. The progression suggests that shortages of both are sufficient to exert a destabilizing effect on society. That evolution of blockade effects, which have reached crisis proportions, is consistent with what the blockade was intended to achieve.

Díaz-Canel explained to the Council that, “neither the [Communist] Party or the government can remain on the sidelines of what’s happening in society.” Therefore, “we must not allow those who neither work nor contribute, and are beyond the law, to acquire more and have more possibilities for life than do those who actually contribute. We have it backwards now and are breaking with the ideas of socialism.”

He pointed out that, “Many of these things are the result of us not attending to the powers and responsibilities assigned to our institutions.” [Corrupt activities] “take place in full view of the Party centers, the administrative institutions, and leadership bodies.”

The president asserted that anyone able to work who is not doing so is not so vulnerable as to require “welfare assistance.” In fact, “the building of socialism does not depend upon a welfare system. What we have to seek out, instead, is social transformation.”

While celebrating another Cuban victory in the U.N. General Assembly, supporters of revolutionary Cuba must recognize that the survival of Cuba’s socialist government is now at unprecedented risk, thanks to the U.S. blockade.

U.S. supporters of Cuba’s revolutionary project would do well to elevate actions of resistance against their own government to a new level, with new intensity. That’s because realities in Cuba appear to have altered, ominously so.

Already, new mobilization may be underway. In the days prior to the General Assembly’s vote on Nov. 3, dozens of rallies for ending the blockade took place in cities and towns throughout the United States (two of them in Maine, the author’s home state), with particularly big ones in Los Angeles, Portland, Ore., and New York. There, an impressive march took place between Times Square and the United Nations Plaza.

World Calls for End to U.S. Blockade on Cuba for the 30th Time