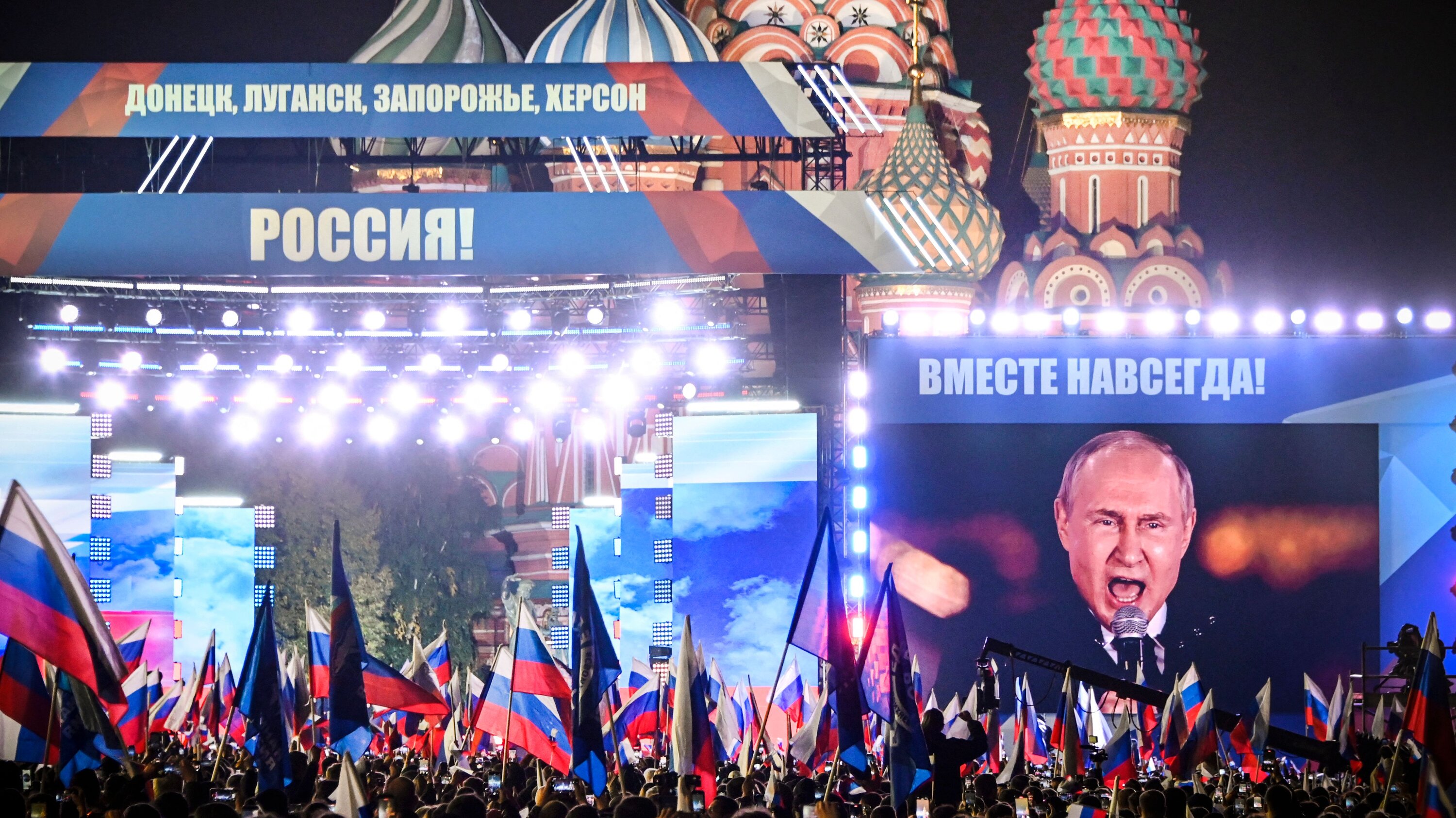 Image: “Putin Is Trying to Outcrazy the West“, NYT

Three years ago, I published an essay under a ‘fake news’ heading urging Vladimir Putin to put aside ‘Mr. Nice Guy’ behavior and rhetoric with respect to Russia’s supposed ‘partners’ in the West and to slam his shoe on the table in the crude manner of Soviet ruler Nikita Khrushchev at the United Nations in 1956.

I very much regretted that Putin repeatedly turned the other cheek when his country was treated unceremoniously or when he was personally insulted by hack politicians in the United States including Joe Biden. Nikita Khrushchev was never called a ‘thug’ or a war criminal; Putin has been so described in mainstream media. I insisted that it was much better for nations and statesmen to be feared than to be liked. Indeed, the future of the world depends on mutual respect born of fear, not brotherly love, as 70 years of Mutually Assured Destruction demonstrated.

Mr. Putin’s devastating critique of the U.S.-led Collective West yesterday in his speech to Russia’s bicameral legislature, regional governors and other high officials just prior to the signing of papers leading to the accession of the Donetsk People’s Republic, the Lugansk People’s Republic and the Kherson and Zaporozhie oblasts to the Russian Federation, indicates clearly that he has thrown in his personal fate and the nation’s fate to the policies of Kremlin hard-line patriots. He has parted company with the still substantial faction of pro-Western Liberals populating the decision-making instances in the Russian capital and in gubernatorial offices.

Until now, Putin played a careful balancing act between domestic liberals and conservatives in a manner similar to what Mikhail Gorbachev did with his Central Committee colleagues of the CPSU. Gorbachev finally lost his balance, was briefly overthrown by the weak and unpopular conservatives, then was reinstated by the liberals only be turned out onto the street months later.  In the case of Vladimir Putin, the conservatives with whom he is now aligned are the key to his own 72% approval rating, even today following implementation of the ‘partial mobilization,’ while the leadership of the liberals, beginning with the ‘red forelock’ (рыжий чуб) Anatoly Chubais, have fled the country in large numbers and pose no threat to the President.

Putin’s recognition of the new ‘subjects of the Russian Federation’ as near and dear to the whole country and as irrevocably integrated into the Motherland, has been correctly identified by Western observers as doubling down on the core ideas of his ‘special military operation’ or, put in other words, as a serious escalation in the proxy war with NATO. Everyone now understands perfectly that Russia will defend its new borders with all its considerable military and other resources.

Russia’s showing its claws has changed the game. Within hours, Ukrainian President Zelensky formally asked NATO for expedited approval of its membership application, by which we may assume he meant immediate admission. In a press conference later in the day, NATO General Secretary Jens Stoltenberg effectively rejected this request, noting that the Alliance has its procedures and admittance of any new member takes time. There can be little doubt that this answer was given to him by Washington. Of course, the days of the Kiev regime are numbered as Russia steps up its war effort. Zelensky & Co. will not survive in power long enough to pursue their NATO application.

Meanwhile the dummy in charge of the U.S. State Department, Antony Blinken, told reporters yesterday that in fact the United States has no indications Russia intends to use nuclear arms in Ukraine. This reversal of his remarks of the past few weeks is no minor point; it means that U.S. flirtation with staging yet another anti-Russian false flag operation, this time by detonating a nuclear device somewhere in Ukraine that might be blamed on the Kremlin, has, thankfully, been abandoned. The world is much safer for all that.

Today’s Financial Times continues its snarling denunciations of the Russian leader and his ‘annexation’ of the four former Ukrainian oblasts. However, in The New York Times I see a sign that even our media can comprehend that the game is up, with or without successes of the Ukrainian counter offensive. I point to today’s opinion essay on the paper’s front page by columnist and three time winner of the Pulitzer Prize Thomas Friedman entitled “Putin is Trying to Outcrazy the West.”

Friedman is the Liberals’ Liberal, much beloved by many of my former classmates at Harvard. He is now saying that maybe the United States should swerve to avoid being hit by the vehicle driven by madman Putin.  Yes, according to Friedman, Russia is losing the war in Ukraine. Yes, Russia is ruled by an autocrat, whose political views are anathema to freedom loving America. Yes, he is isolating Russia globally and turning it into a kind of North Korea. But for our and the world’s safety, we should let him pass and not go head-to-head with Russia.  This is precisely what I expected in my mention a couple of days ago that Putin would do well to take a page of Richard Nixon’s strategy of assuming the guise of a madman in 1972 to bring the North Vietnamese to the negotiating table.

The notion that there will be some ‘kiss and make up’ between Russia and the Collective West is now fully discredited. An enemy is an enemy. A clash of civilizations is a clash of civilizations. The most to hope for in the foreseeable is a truce, an end to military hostilities. For this to be achieved, Mr. Putin has to match his tough words with tough deeds and, as I have suggested, swiftly decapitate the civilian and military leadership in Kiev. The leadership of the Collective West will do nothing about it other than bark, while the rest of us will be able to sleep calmly after months of anxiety.