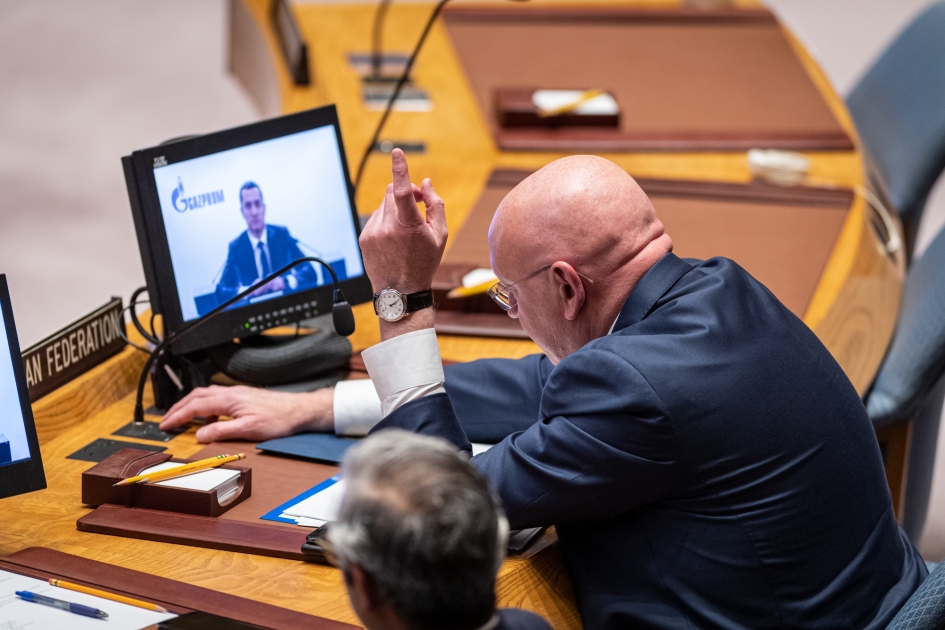 We thank the representatives of the UN Secretariat and Gazprom for the information provided. We also thank Mr. Marc-Antoine Eil-Mazzegg. I will not comment on his interesting but in my opinion not always objective presentation of what has happened and is happening in the gas market. We have a representative from Gazprom with us here, and I think that if he wants to, he will do so himself.

Russia has requested today’s meeting in connection with the September 27, 2022 sabotage of three strings of the Nord Stream offshore pipeline system in the exclusive economic zone of Denmark and Sweden, near the Danish island of Bornholm. The Office of the Prosecutor General of Russia has already initiated a criminal case under an article on an act of international terrorism. A preliminary investigation has begun.

Fact number one. A few weeks before the special military operation was launched, U.S. President J. Biden said, and I quote: “If Russia invades, I mean, if its tanks and troops cross the Ukrainian border again, there will be no more Nord Stream 2, we will put an end to it.”

In response to a journalist’s question about how it is possible if Germany, not the U.S., controls Nord Stream 2, President Biden said: “I promise you, we can do it. Many U.S. officials repeated this thought at the time.

Fact number two. In June 2022, the Danish island of Bornholm, where the incident on the Nord Stream branches will take place three months later, became the site of a large-scale NATO BALTOPS exercise in the Baltic Sea.

American publication Sea Power wrote that one of the main objectives of the Alliance in the course of the exercise was to test unmanned underwater vehicles, for which the water area near the island is the most suitable. After the end of the exercise the american landing ship USS Kearsarge did not leave the waters of the Baltic Sea and was near the Danish island until the twentieth of September. But the most interesting thing is that since the end of August the helicopter constellation of the ship started systematic patrolling of the Bornholm Island, and the flight path of helicopters surprisingly coincides with the route of gas pipelines. I would like to stress: this is open sea and air geolocation data collected on the basis of transponder information. That is, the U.S. did not conceal its presence in the area and carried out its maneuvers demonstratively and deliberately.

Fact number three. Right after the incident, former Minister of Defense and Foreign Affairs of Poland Radek Sikorski posted on Twitter the photo of the pipeline accident site and directly thanked the USA for this sabotage. He wrote: “Thank you, USA. Here is a photo of this tweet. The current MEP didn’t stop there and made a comment under his post, and I quote: “There is no shortage of pipeline capacity to transport gas from Russia to Western Europe, including Germany. The only logic behind Nord Stream was that Putin could use it to blackmail or start a war in Eastern Europe with impunity.” Yesterday, apparently realizing he had said too much, he deleted his post. It should be noted that Anna Appelbaum, the wife of Mr. Radek Sikorski, is a person who has access to a wide range of information and has access to the power base in Washington.

Fact number four. Almost simultaneously with the sabotage of Nord Stream there was an official opening of the Baltic Pipeline from Norway in the Polish town of Golenyow, which the Poles have long been positioning as a rescue from Nord Stream, although, incidentally, the throughput capacity of Baltic Pipeline is absolutely incomparable to Nord Stream.

Fact number five. A statement by the NATO bloc in connection with the sabotage, which warns of the danger of strikes on NATO infrastructure. As if NATO fears that someone will retaliate against them for something. As the saying goes, “the thief beats the thief.

As in any investigation, first of all, it is important to establish who benefits from the situation, or, as the investigators say, who had the motive and the opportunity to carry out a criminal act. Let’s think about it further. Is the destruction of Nord Stream beneficial to European states? Hardly. In this case, they would become dependent on a more expensive and highly unreliable supplier. I mean the host country of UN Headquarters. Leaving aside the Polish, Czech and Baltic politicians who are completely mad with Russophobia, with all the anti-Russian hysteria going wild in the EU, experts cannot but understand the danger of such a scenario and its consequences for the European economy. Serious environmental damage has been done to the waters of the Baltic Sea. Maritime traffic in it is under threat. Colleagues from Denmark and Sweden have confirmed all this in their letters to the SB.

The objective significance of Nord Stream 1 and Nord Stream 2 and their contribution to Europe’s energy security has been repeatedly emphasized by top officials of the EU and its member states. For the European Commission, Nord Stream initially had the status of a “project of common interest in the EU” and enjoyed full political support. The pipeline system made a significant contribution to the diversification of blue fuel supply routes, as did the Yamal-Europe and Turkish Stream pipelines. Their commissioning made it possible to gradually begin to move away from the monopolistic transit dependence of Europe’s gas supply on the Kiev government, which was noted for its unfair business practices. Simply put, theft.

For years, the leadership of Germany has claimed that the need for gas for Germany and Europe will only grow. In 2021, the Austrian authorities claimed that Nord Stream would contribute to Europe’s energy security and welcomed steps that would increase the continent’s security of supply. The consequences of the energy crisis proved right for those who understood the importance of Nord Stream to ensure stable and predictable energy supplies. Gas supply disruptions caused by European and U.S. sanctions in 2022 have already had a negative impact on European industry, its profitability and competitiveness, provoking the emigration of skilled labor and the relocation of production facilities outside Europe, particularly in the United States. Energy poverty is not just back; it has burst onto the agenda not only of the developing world, but of developed countries as well. The resumption of supplies, primarily under long-term contracts, as suggested and suggested by Russia, would stabilize the situation in the producing industries and avoid an energy collapse.

The next question is whether the destruction of Nord Stream would be beneficial for Russia? If we talk in terms of common sense and not in the spirit of morbid fantasy that the Russians are willing to do anything, just to intimidate Europe, then of course not. It makes no sense for us to ruin with our own hands a project in which we have invested an enormous amount of money and from which we could get a substantial economic return. You said yourself in the West that we make money on energy exports and benefit from higher energy prices.

And finally, the main question is: Does what happened with Nord Stream benefit the United States? Absolutely. U.S. liquefied natural gas suppliers should celebrate the multiple increase of LNG supplies to the European continent. And from the political point of view – the last string ensuring the EU independence in the field of energy has been severed. European production is hastily transferred to the U.S. amid the energy crisis, they receive advanced personnel, technology, production resources – everything that united Europe has been accumulating and developing for decades. Europe’s inhabitants are left alone with their problems. No one overseas cares that Europe faces a very dark, cold and long winter.

In connection with these simple and logical questions, I want to ask the U.S. representative: can you confirm, right now in this room, that your country had nothing to do with this diversion?

Colleagues, of course we are not setting out today to find and name the perpetrators. The Security Council is not a judicial body and should not take on such tasks. Russia is therefore in favour of a comprehensive investigation to clarify the true circumstances of what happened.

We are interested to hear today the opinions of our Western colleagues and to hear your official point of view. We hope that you will refrain from the Russophobic and senseless verbal equivocation of the kind you used with regard to the Ukrainian strikes on the Zaporozhye nuclear power plant. Should we expect from you statements that following the “masochistic” shelling of the ZNPP, where we ourselves are located, we started to undermine our own gas pipelines?

For us it is absolutely clear that the implementation of a sabotage of this complexity and scale is beyond the power of mere terrorists. We consider the actions of damaging gas pipelines to be a deliberate sabotage against the most important energy infrastructure of the Russian Federation. An attack that could hardly have taken place without the involvement of state or state-controlled entities. We will definitely identify all those involved in this sabotage. Those who were behind it cannot claim the position of a non-party to an armed conflict or the status of neutrality, which, however, Western countries have already violated. Moreover, I would like to emphasize that any international investigation of what happened can claim to be objective only if Russia is involved in it. We are also convinced of the need for full participation in the investigation not only by those countries in whose territorial waters the sabotage occurred, but also by representatives of the Federal Republic of Germany, which was mainly intended for the Nord Stream gas.

If the version of the involvement of certain states in the terrorist attacks is confirmed, it would mean a deliberate escalation of the conflict. I hope, colleagues, that everyone in this room is aware of the dangerous line that those who have committed this sabotage are taking us to.

Thank you for your attention.

Back to the representative of the United States:

I am grateful to my American colleague for his direct answer to our direct question.

We had the following question, “Can you confirm right now in this room that your country had nothing to do with this sabotage?” The American colleague said in this room that the United States denies any involvement in this incident. And I thank him for his answer. But I would like to ask one more question after your words, as well as after the words of our British colleague: what do you call Russian disinformation and conspiracy theories? We did not name the guilty parties here until after the investigation. Everything we did, we cited facts. You’re not going to deny what your President said in public. Those are his quotes, just like everything else he said.

It is a fact that there was a NATO BALTOPS exercise near the island of Bornholm in June 2022. It is a fact that former Polish Minister R. Sikorski published the tweet I showed where he thanked the United States for what happened to the gas pipelines. It is a fact that the Baltic Pipeline from Norway was opened. It’s a fact that the NATO bloc said it was sabotage, that it was unacceptable to strike the infrastructure of NATO countries. These are just facts. Are you going to deny that the current energy crisis in Europe objectively increases the competitiveness of American energy producers? Are these conspiracy theories, too? This is an economic reality that is objectively economically beneficial to the United States.

Finally, before our American colleague spoke, we honestly did not link what happened with Nord Stream to the situation around Ukraine. Now we see that our Western colleagues perceive this sabotage, whoever committed it, as a kind of revenge for Russia’s actions in Ukraine. Well, I think this statement narrows down the suspects and could help us tremendously in our investigation.