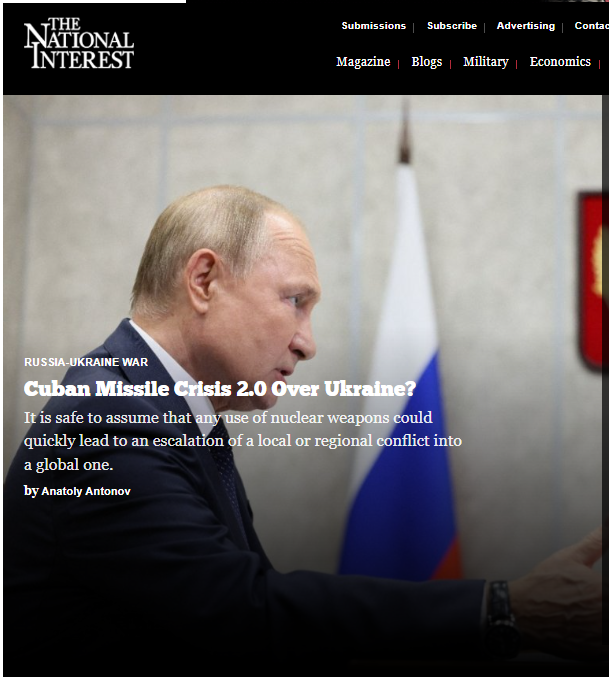 It is safe to assume that any use of nuclear weapons could quickly lead to an escalation of a local or regional conflict into a global one.

As Henry Kissinger wrote in 2014, “The demonization of Vladimir Putin is not a policy; it is an alibi for the absence of one.”

I have commenced my work on this article for two reasons. Firstly, this October will mark 60 years since the Cuban missile crisis when the USSR and the USA were on the verge of a nuclear conflict. This is an occasion to look closer at the foreign policy lessons that the two great powers have learned from that dramatic time. I believe that any American will see eye to eye with me that we must not allow the explosive situation of the 1960s to repeat. It is important that not only Russia and the United States, but also other nuclear states confirmed in a common statement that a nuclear war cannot be won and must never be fought.

Secondly, we are witnessing a surge of concern of the international community and US experts about the possibility of a nuclear conflict between Moscow and Washington. This issue has become even more acute in recent days, when senior officials of the US administration began sending us direct signals warning against the use of nuclear weapons in the Russian special military operation in Ukraine. Moreover, threats against us have started to be heard from the official establishment.

The Princeton University has even made predictions that millions of US and Russian people would perish in the exchange of nuclear strikes. Sometimes it feels like we are returning to the years of McCarthyism in this issue. One hardly can forget former US Secretary of Defense James Forrestal who jumped out of the window yelling “the Russians are coming”.

The US media is abounding in publications by pseudo-experts who are ignorant of history and misinterpret the current state of affairs. They erroneously compare today’s situation with the Cuban Missile Crisis.

The statements by certain politicians and the media that US-Russian relations are living through an unprecedented crisis may well be accepted. Let me remind you that just a couple of years ago we talked about a difficult stage in the bilateral dialogue. However, no one could have even imagined that it would come to such a perilous point. Everything created over many years of hard work, including political, economic, cultural, scientific, and educational ties, has been written off to the dustbin of history.

We see a deplorable, deserted picture in arms control. The ABM and INF Treaties have sunk into oblivion. The Open Skies Treaty has virtually ceased to exist. The New START Treaty is approaching the end of its duration and, as we have repeatedly said, is not fully implemented by the American Side. The NPT is experiencing serious shocks. No one can foretell what will happen next.

I have to remind the readers that all this is a result of the US policy. Let me elaborate on my point. Washington withdrew from the treaties in order to gain security advantages, especially in confronting Russia. It is in a constant search for opportunities to achieve global military dominance.

Over the last decades the NATO military machine has approached in several “waves” Russia’s borders – where a powerful striking fist was raised over my Motherland. How should we have reacted? We warned our colleagues that such steps were counterproductive, increased the risk of an arms race; and we could not ignore the aggravating threats along the perimeter of the Russian boundaries. Especially, our Western boundaries. I remember long-hour gatherings at the NATO headquarters where I had to participate repeatedly in discussions on the harmfulness of global missile defense, the importance of respecting international commitments on strategic stability, and the danger of deploying shorter- and intermediate-range missiles in Europe. Russian exhortations turned out to be in vain.

The last straw that broke the camel’s back was NATO’s attempt to launch military-technical exploitation of Ukraine and cultivate in Kiev a regime desiring to wage a bloody war against Russia.

Today our country is accused of all sins. They claim that we have unleashed an armed conflict in Europe. I have to wonder: what did the US do to ensure the implementation of the Minsk agreements? Why did Washington keep silent for eight years and did not pull Kiev up when Ukrainians and Russians were killed in Donbas?! How could it ignore the terrible tragedy in Odessa when several dozen people were burned alive?! Where were the international humanitarian institutions?! Why did the administration prioritizing human rights allow such crimes?! We have repeatedly asked American politicians these questions. Nothing but beautiful slogans was the answer. Ukraine has been continued to be pitted against Russia.

Today it is obvious that the US is directly involved in the military actions of the Kiev regime. Washington is openly building up supply of lethal weapons to Ukraine and provides it with intelligence. They jointly plan military operations against the Russian Armed Forces. Ukrainians are being trained to use NATO military hardware in fight.

It feels like Russia is being tested to see how long it will remain patient and refrain from responding to blatantly adversarial actions and attacks. In fact Washington is pushing the situation towards a direct confrontation of the major nuclear powers fraught with unpredictable consequences.

US officials continue to escalate the situation, intimidating the American and international public with sham Russian “nuclear threats”. Such rhetoric twists the statements by the Russian leadership.

I would like to stress that there has been no change in the conditions when our country would use nuclear weapons. In this regard we continue to strictly adhere to the 2014 Military Doctrine and 2020 Basic Principles of State Policy on Nuclear Deterrence. Moscow has never mentioned an expansive interpretation of these documents which can be found in the public domain.

We are not threatening anyone. But we confirm that, as President Putin said on September 21, Russia is ready to defend its sovereignty, territorial integrity and our people with all weapon systems we have. What is so aggressive about this statement? What is unacceptable? Would the US not do the same if faced with an existential threat?

I would like to add that certain American politicians are under a delusion if they think that our readiness to defend our territory does not apply to Crimea or to territories that may become part of Russia on the basis of a free expression of popular will.

I would like to warn American military planners about the fallacy of their assumptions that a limited nuclear conflict is possible. They apparently hope that the United States would be able to take cover behind the ocean if such a conflict happens in Europe with British and French nuclear weapons. I would stress that this is an extremely dangerous “experiment”. It is safe to assume that any use of nuclear weapons could quickly lead to an escalation of a local or regional conflict into a global one.

I want to believe that, despite all the difficulties, we and the Americans have not yet approached a dangerous threshold of falling into the abyss of nuclear conflict. It is important to stop threatening us.

Today it is difficult to predict how far Washington is ready to go in exacerbating the relations with Russia. Will the US ruling circles be able to give up their plans aimed at wearing out our country with the prospect of its dismemberment?

The recent Shanghai Cooperation Organization summit and the high-level week of the 77th UN GA session have proved that a considerable part of the planet is not satisfied with the world order that was created after the collapse of the Soviet Union. We are witnessing the majority of the global community trying to find ways to establish an equitable system of international relations which would have neither first- nor second-tier states. We firmly support such a world order based on international law, the UN Charter, and the principle of the indivisibility of security.

Lavrov: “The Future of the World Order is Being Decided Today”