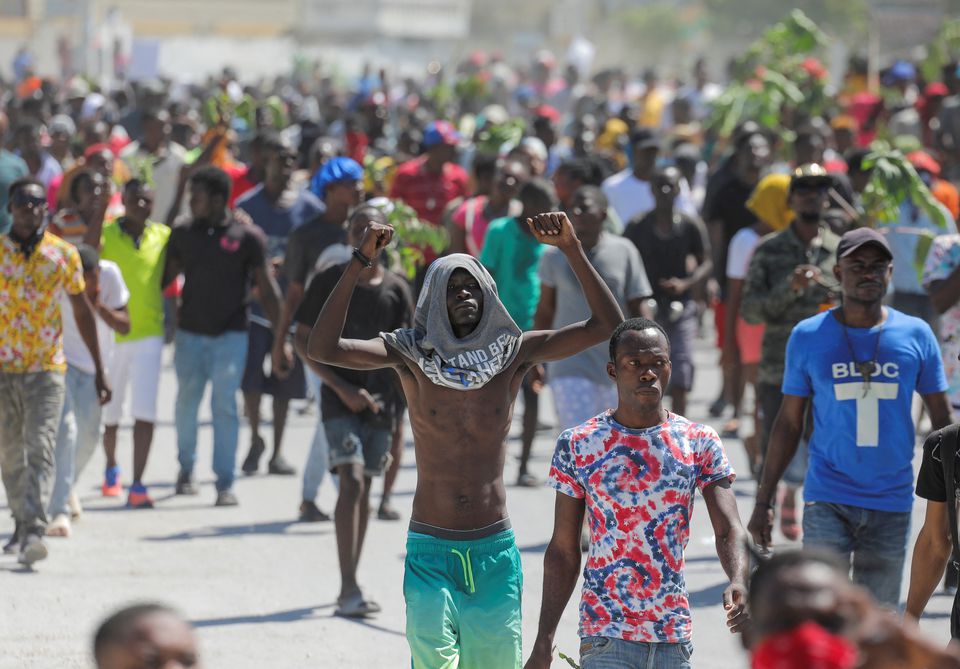 The United Nations is complicit in what is referred to as the “gangsterization” of Haiti. The existence of criminal gangs is the result of UN Core Group interference yet is now the pretext for additional intervention.

By a set of political and social organizations

The Haitian people in struggle were greatly surprised and stunned, when they learned that you have broadcast, on channel France 24, with regard to their current just and legitimate protest movement, a set of false information that is prone to confusion, criminalization, discredit their struggle for a sovereign Haiti, just, livable. Contrary to your assertions, these popular protests are part of a struggle for a Haiti free from suffocating foreign interference, gangsterization, this extreme manufactured misery and an anti-national, illegitimate, criminal political regime established by the Core Group of which the UN is a member. This puppet political regime, operating under the dictation of the International Monetary Fund (IMF), has just stabbed the people by the decision to increase by more than one hundred percent (128%) the price of petroleum products, which have already suffered, in less than a year, a vertiginous increase that has led to the doubling and tripling in some cases of the prices of basic necessities and others. Note that in July 2022, according to data from the Bank of the Republic of Haiti (Brh), the inflation rate already reached 30.5%[1]. It is already announced that it will reach more than 50% in November if this increase in the prices of petroleum products is maintained.

You will agree that to accept this new criminal increase in the prices of petroleum products is at the same time to admit the doubling of prices, previously doubled or tripled, and thus increase the ordeal of the suffering Haitian people. This new decision, taken to the detriment of the interests of the people, has aroused his anger and also intensified a protest movement already initiated, whose objective is the recovery of our sovereignty, the recovery of Haiti’s destiny by Haitians, the establishment by Haitians of a legitimate government, capable of defending the interests of the people and meeting the various challenges of the moment.

This, among other things, and quickly, is what motivates this general protest movement, which inflames the whole country and which puts crowds of rebellious citizens everywhere in the streets, outraged by the unacceptable actions of a corrupt criminal power, supported by the imperialist powers, the Core Group and the UN in particular.

So, Mr. Secretary General, you have probably been misinformed.

Undoubtedly, this is the reason why, with great lightness, you said, on the French channel France 24, that what is currently happening in Haiti would be a case of gangs having invaded the whole country and that this gang movement would be infiltrated by political sectors and businessmen/ women. You have thus totally distorted the reality on the ground and given an exactly opposite version of what is happening in the reality of the facts. The truth is that the gangs in Haiti, which are the political appendages of the current de facto power, of the Core Group – which operate in peace and under command – have tried to infiltrate the popular protest movement, under the orders of their bosses, to throw confusion, discredit it and thus provide the international and you especially with a pretext to succeed in criminalizing it.

Contrary to what you have dared to allege without any evidence, it is the gangs – whose federation has been presented to you as a reductor of murder cases by Mrs Lalime, your current Special Representative – who have, on authorization and on “special” request, tried to infiltrate the popular mobilization to sow confusion and thus try to distort it. But fortunately, many astute observers had already understood the game and had invited the Haitian people to be cautious, therefore to take all the necessary precautions, in order to avoid this harmful infiltration and its perverse effects.

Mr. Secretary-General, your unfounded statement challenges us and leads us to produce a set of pertinent questions, namely:

Has your Special Representative in Haiti, Ms. Helen M. Lalime, who is responsible for informing you, not informed you insufficiently or simply misinformed you about what is really happening in Haiti?

Moreover, do you have a clear awareness of the pernicious role that the UN has played and still plays in the criminal process of gangsterization of Haiti, calling into question respect for the fundamental rights of the Haitian people?

Moreover, a highly serious fact already pointed out in a statement by various Haitian organizations, the current representative of the United Nations Integrated Office in Haiti (BINUH) is considered the instigator of a federation of armed gangs with terrorist practices throughout the country. To be convinced, it is enough to refer to its report [2] dated September 25, 2020. Have you measured what the involvement of your special representative in the scandal of the federation of gangs, federated gangs in order to feed and reinforce insecurity to the point of chaos, represents in terms of public morality?

You also specified that “a plan to strengthen the Haitian National Police (PNH) and send a robust military force to fight gangs would be under consideration at the UN level”. Mr. Secretary-General, the United Nations has been increasing its missions in Haiti since 1993 (UNMIH). Specifically, it is worth reminding you of the undeniable failure of various UN missions in Haiti over the past eighteen years (2004-2022). Far from helping to improve the situation, they have all contributed to making it worse. What we are calling for is not the dispatch of a military mission, but rather the establishment of an independent commission of inquiry to evaluate the concrete results of the various UN missions already sent to the field, and in particular the latest one, the BINUH, led by your representative with incomparable cynicism, Helen M. Lalime.

In addition, why consider sending a military force to thwart the criminal action of gangs, when we know that gangs are servants who operate on command, including at the behest of the power in place, the Core Group and your special representative?

You also stressed, confining yourself to the infernal logic of the IMF and the objective of supporting the criminal decision to increase the price of petroleum products once again, that “the Haitian State must not subsidize petroleum products, but preferentially subsidize families.” It is fundamental to remind you that it was always for the benefit of families that these products were subsidized and when the State, on the orders of the IMF, is forced not to subsidize them, it is unfortunately to the detriment of the interests of these same families, of which you speak, that this is done. These families, who have a fixed monthly income, will have to face, as a result of this irresponsible decision, a very complicated, highly precarious and worrying situation.

Under these conditions, how do you expect the families to sit idly by in the face of this malicious and unwelcome decision by the illegitimate Prime Minister, which penalizes them so terribly?

Do the families or the popular masses need, in this case, the gangs, supported by the UN, which massacre them, kidnap them daily to flank them in the streets?

In conclusion, Mr. Secretary-General, we want to assure you that the people, this time, will leave the streets only with the establishment of a transitional Government, chosen by Haitians with a road map, a comprehensive program in the direction of satisfying their legitimate demands. This necessarily involves the resignation of Ariel Henry, whom you and the other actors of the international anti-Haiti community intend at all costs to support, for the criminal work of destabilizing our country that he carries out to your satisfaction.

We, the signatory organizations, invite you to pull yourself together and show respect for the struggle of the Haitian people and to repair the enormous wrongs committed against them by your derogatory actions and remarks. We are also convinced, as already pointed out in correspondence last July, that the time has come for relations between Haiti and the United Nations system to be defined on a new basis, given the negative and disastrous results of the UN missions deployed in Haiti since the 1990s.