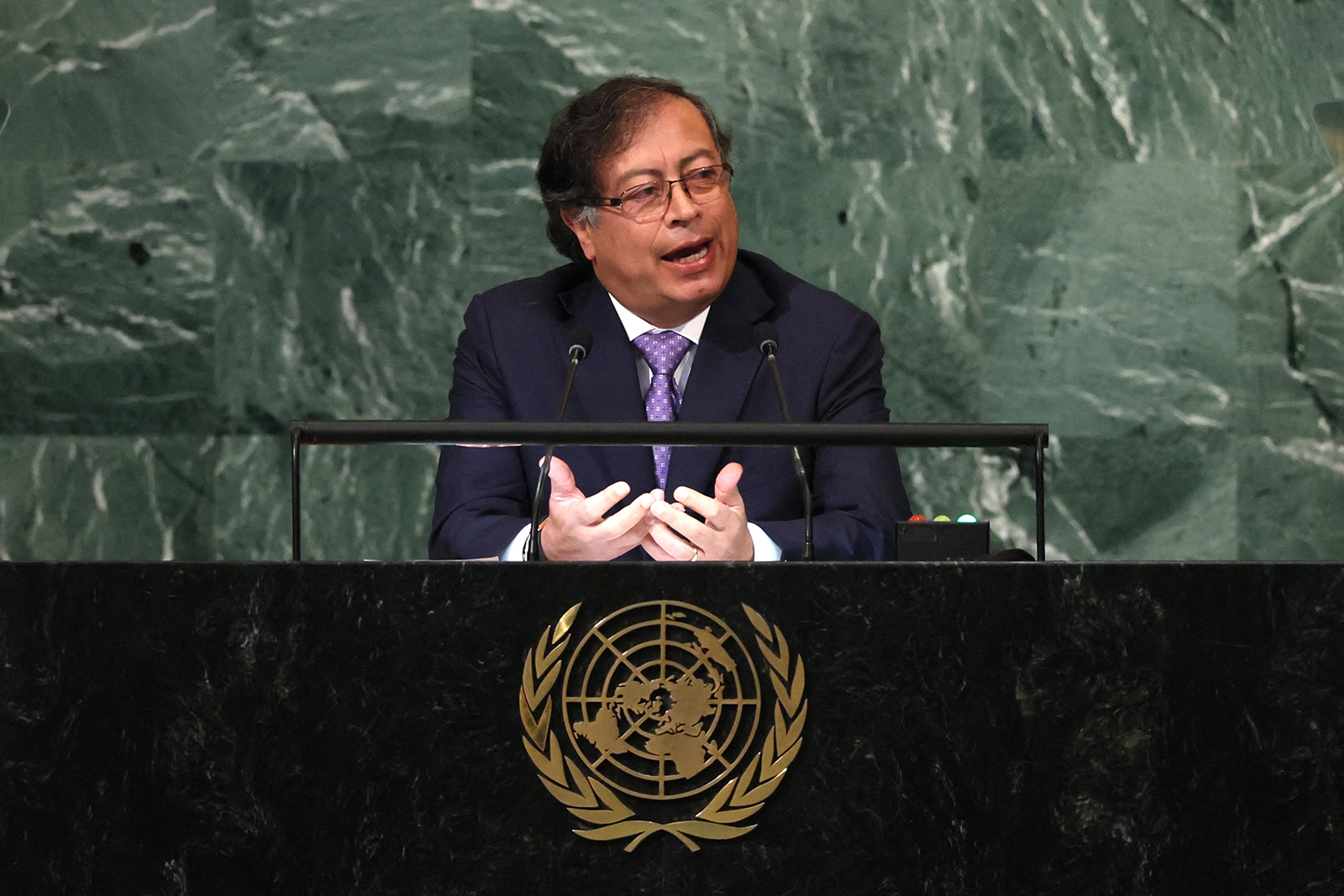 The 77th high-level segment of the United Nations General Assembly (UNGA) began on September 13 and so far 16 Latin America countries have spoken, and the differences in the tone and topics of the speeches reflects the complex political situation in the region.

The ultra-right-wing Brazilian President Jair Bolsonaro was the first one to address the Assembly. His highly politicized and electoral speech did not surprise anyone, except for the hypocrisy he showed when talking about climate change, since his government is responsible for the dramatic increase in deforestation and the massive neglect of the Amazon rainforest. However, his name made headlines after the New York City Empire State Building’s facade was lit with phrases of protest against him.

Bolsonaro did not miss the opportunity to criticize the Nicaraguan government while making some electoral propaganda. He talked about corruption in his country during the Worker’s Party (PT) mandates but completely ignored that both he and his son are under investigation due to corruption and influence peddling charges in the purchase of vaccines against COVID-19. Instead of focusing on the purpose of the multilateral meeting, Bolsonaro instead made the UNGA another stage for his electoral campaign, which has been widely criticized worldwide.

Paraguayan President Mario Abdo did not miss a chance to show his colors by criticizing his neighbors by saying his country would do everything possible to continue investigating alleged human rights violations in Venezuela. He also highlighted his administration’s economic achievements, which are based on the implementation of harsh neoliberal policies that have plunged thousands of Paraguayans into poverty.

Memory is not the strong suit of regional right-wing, and Abdo is an example of it since last year the Paraguayan people protested in the streets and demanded his resignation due to his chaotic management of the pandemic and the subsequent economic crisis.

However, these shameful actions have not been the rule but rather the exception. Most of the region’s leaders and Foreign Affairs Ministers have focused on the region’s main challenges and urging unity to overcome them. Among the most urgent ones are climate change, the increasing poverty, hunger and inequality, respect for the sovereignty of peoples, and while confronting all kinds of organized crime.

One of the boldest speeches was that of Colombian President Gustavo Petro, who masterfully showed the world that humanity’s main problems are the result of an economic-social system based on irrational consumerism, unequal distribution of wealth, and rewards competition instead of cooperation. Until this reality is changed, any solution will be nothing more than a palliative one.

Petro stated the fight against drug trafficking in the region has failed. The strategies supported by the United States have only increased violence and destroyed the environment through the indiscriminate use of herbicides such as glyphosate. According to the president, it is not possible to solve the problem by blaming only the producers. It rather is mandatory to eradicate the reasons why people consume drugs. In this regard, he pointed out that the United States is one of the main consumers in the world, and it is doing little to change this.

This position was shared by Bolivian President Luis Arce, who rejected recent White House accusations against his country, which was included on a unilateral list of “major drug transit countries or producers of illicit drugs.”

Both Bolivia and Colombia raised the need to accelerate the global energy transition and reduce dependence on hydrocarbons, which are the main cause of global warming.

Honduras, Guatemala, and El Salvador’s presidents spoke for Central America. The three presidents agreed that the migratory waves that pass through their countries towards the United States will not be stopped by more discrimination against migrants or fences. Instead, it is necessary to foster cooperation and improve people’s living conditions. Salvadoran President Nayib Bukele affirmed powerful states should respect the sovereignty of their small neighbors and stop obstructing their development, which is a clear reference to U.S. interference in the affairs of his country and the region.

Meanwhile, Honduras’ President Xiomara Castro stressed people cannot be judged for migrating to look for better living conditions. Reducing inequality, creating decent jobs, and improving social assistance are some of the initiatives her government has implemented for the welfare of its people. However, all efforts will be incomplete if developed countries do not commit to increasing cooperation and transforming the current world economic order.

Xiomara Castro also rejected the unilateral sanctions by countries such as the United States and made special mention of the blockade against Cuba. This position was echoed by other leaders such as Argentina and Bolivia’s heads of state. Meanwhile, Cuban Foreign Minister Bruno Rodriguez denounced the effects of this genocidal policy, which violates international law, and causes countless suffering to Cuban families all around the world. He also stressed the need to stand as one to help the Haitian people, the poorest country in the region.

Argentine President Alberto Fernandez also stood with the progressive block of the Latin American region. He reminded the body that all the IMF debt that his government inherited thanks to the Macri years must be mitigated to allow for social and human improvements in the lives of the vast majority. He urged England to return to the negotiating table to return the Malvinas Islands back to its rightful owners as well as calling for the end the blockades of Cuba and Venezuela. As the current president of CELAC Fernandez, like the others, struck a chord of mutual respect and cooperation by saying, “We must work together in solidarity. We must strengthen a cooperative multilateralism that ensures the strengthening of the rule of law, the rule of nonviolence and greater equity to reduce social gaps”.

The interventions of the Latin America leaders demonstrated that progressive governments have common positions regarding the main challenges of the region. They also agree on the fact that U.S meddling only hinders possible solutions and deepens the problems. The solutions to global problems will have no effect unless radical changes are implemented in the distribution of wealth worldwide and the recognition that the developed countries are the ones most responsible for the deteriorating condition of the planet . On the other hand, positions such as those of Bolsonaro and Abdo, clinging to the old imperial paradigm, make it clear that the regional right has little to offer our peoples.