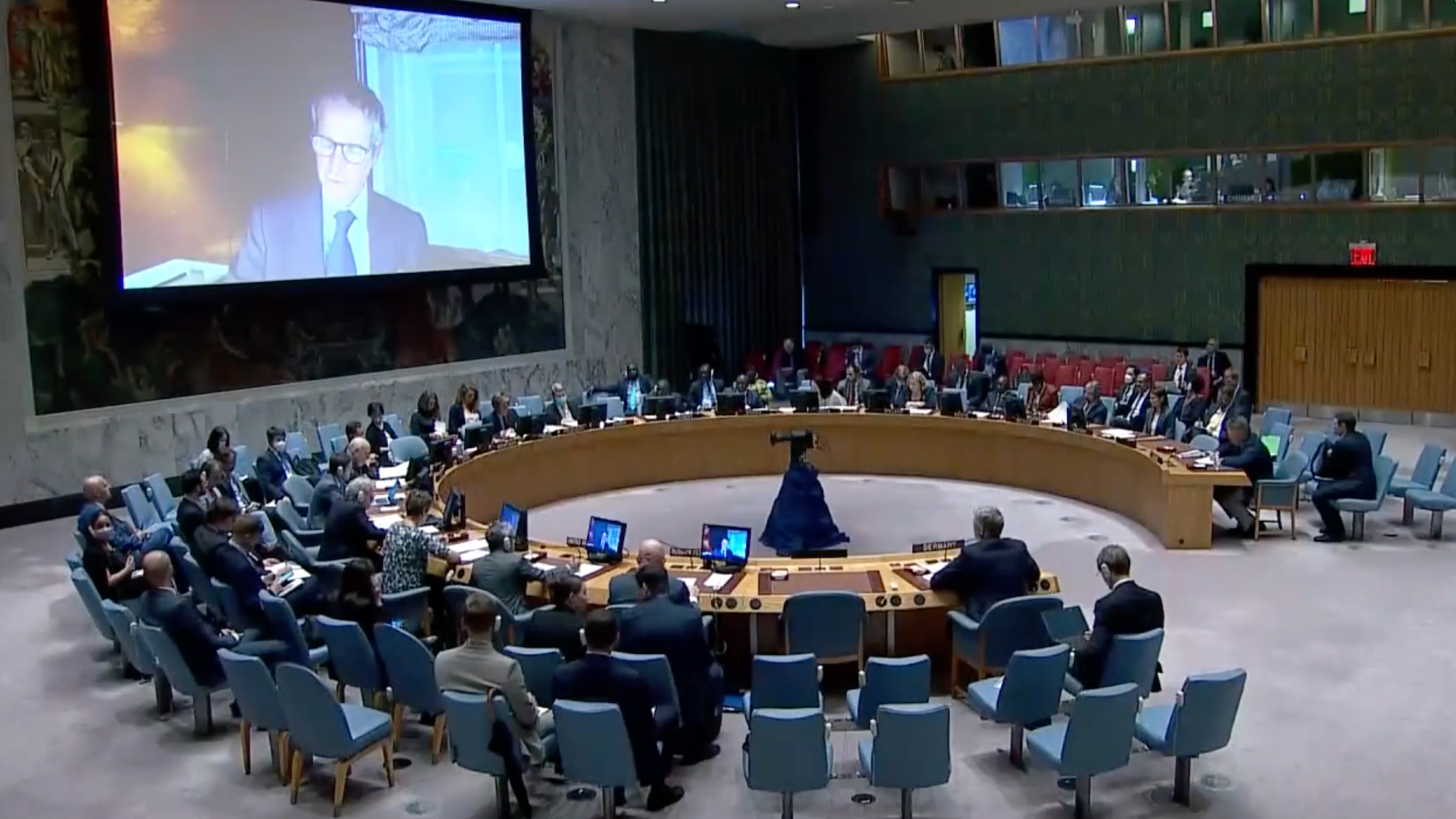 Statement by Permanent Representative V.A. Nebenzi at the UN Security Council meeting on the attacks by the Ukrainian armed forces on the Zaporizhzhia NPP

We thank UN Secretary-General A. Guterres and IAEA Director General R. Grossi for their briefings.

We commend Mr. R. Grossi for his decision to carry out the Agency’s mission to Zaporizhzhia NPP. This is a responsible and courageous step on the part of the IAEA leadership, confirming the Agency’s global role in the nuclear energy sector.

We are glad the visit allowed you, Mr. Director General and your team to see for yourselves the situation at Zaporizhzhya NPP and make sure we strictly adhere to the safety principles you formulated. It is important, as we heard during your briefing in Vienna on September 2, you could see with your own eyes that due to well-established cooperation between the plant personnel and Russian armed forces guarding the plant, it is generally operating in normal mode and there are no “internal” threats to its safety. You have had an excellent opportunity to see that the only threats are shelling and sabotage by the Ukrainian armed forces.

We see confirmation of this in your conclusion voiced at the above-mentioned briefing that the greatest concern of the Agency is the physical security of the station and its integrity, the risks to which have increased due to the shelling in August.

We regret that your report on the implementation of IAEA safeguards in Ukraine from April to September of this year, which appeared just a few hours ago, does not directly identify the source of the shelling. We understand your position as head of the international regulator, but in the current situation it is extremely important to call things by their proper names. Perhaps if the document had focused solely on the results of your visit to the ZNPP, your conclusions might have been clearer and more unambiguous. We will need more time to study the document, so I will not dwell on it in detail. We would only like to ask you to clarify what military equipment you saw during your visit to Zaporizhzhya NPP?

We do not sit idly by and let the reckless actions of the Kiev regime be hushed up. Last month we twice called a UN Security Council meeting on this matter. We tried to “get through” to our Western colleagues, explaining that this shelling poses a real threat of nuclear catastrophe at the largest nuclear power plant in Europe, urging Western delegations to think about the possible consequences for the population of the continent and to “besiege” their wards in Kyiv. Unfortunately, our call was not heeded, and with the tacit consent of Western handlers, the Kiev regime continued shelling the ZNPP. They are still doing it today, on which I will elaborate later.

We welcome the decision of IAEA leadership to establish a permanent presence of the Agency at the plant. This makes a qualitative difference: the IAEA is now able to independently assess the situation in real time, given that there are two inspectors permanently stationed at the Zaporizhzhia NPP. We are ready to provide all possible assistance to their work.

I would like to emphasize that from the very beginning we have consistently supported the IAEA’s efforts to ensure nuclear and physical nuclear safety of Ukrainian nuclear facilities. The Russian side has done everything in its power to ensure that R. Grossi and his team get safely to the ZNPP, complete their work and return to Vienna. This fact was noted by the official representative of the UN Secretary General, stressing that “the Russian Federation did everything necessary to ensure safety of the IAEA inspectors who visited Zaporizhzhia NPP”. We would like to hear your assessment, Mr. Director General, of how satisfied the IAEA is with interaction with the Russian side, particularly in terms of ensuring an adequate level of safety for the mission.

Unfortunately, as we had feared, the Ukrainian side, realizing that it could not use the IAEA visit to ZNPP for its propaganda purposes, did everything to disrupt it. On the day of the Agency’s visit, September 1, the Ukrainian Armed Forces opened massive artillery fire on the plant and the city of Energodar from 5 a.m. onwards. They continued shelling ZNPP until the last moment, when the IAEA team was already on its way to the plant. Ukrainian artillery fired at the territory of Zaporizhzhya NPP, the meeting place of the IAEA mission with Russian specialists near Vasilievka settlement, and the route of their movement to Energodar. Four shells exploded at a distance of 400 meters from the first power unit of Zaporizhzhya NPP. The actions of the AFU directly threatened the lives and safety of the Agency inspectors.

But the Kiev regime did not stop there. It went for a monstrous provocation, attempting to seize the plant by force, right before the IAEA mission arrived at the plant. At six o’clock in the morning of September 1 Ukrainian Armed Forces sent sabotage groups through the Kakhovskoe water reservoir in the direction of Zaporizhzhia NPP in order to seize the plant. In other words, in order to create an impression of the AFU’s success, which, as we know, is necessary for the Zelensky regime to extort Western weapons, they meant to unleash active combat operations around the plant, which could have led to critical damage to its integrity. In case the operation was a success and the ZNPP came under the control of the Kiev authorities, the head of the IAEA R. Grossi and the experts of the mission would become a “human shield” for the Ukrainian saboteurs.

These provocations were prevented due to the effective actions of the Russian Armed Forces and Rosgvardiya units, as well as the vigilance of the local population. As a result, the meeting between the representatives of the Russian Federation and the IAEA team did not take place until noon, four hours later than planned. We commend the courage of the Agency representatives and their willingness to work literally under Ukrainian fire.

We would like to ask you, Mr. Director General, what was the impact on the work of the mission of the Ukrainian armed forces’ attempt to disrupt it through the landing of saboteurs to seize the ZNPP by force. How can you comment on these actions of the Ukrainian side in the context of threats to the physical security of the plant and the safety of the Agency personnel?

I would like to address a similar question to the Secretary General. Employees of the UN Security Department were part of the IAEA mission, they were directly involved in ensuring its security. They were supposed to assess the situation and to be aware of all the actions that create risks for it. What do your staff say about the risks posed to the mission by the actions of the Ukrainian side?

Kiev didn’t even consider it necessary to conceal its disappointment with the results of the IAEA visit to ZNPP. Zelensky’s advisor M.Podolyak said, among other things, that “all these intermediary missions look extremely ineffective and extremely cowardly, extremely unprofessional”. According to him, they were never ready to work in extreme conditions, and this concerns not only the IAEA, but also the UN. In the characterization of the Ukrainian functionary, international organizations are “not trusted already at the entrance. Mr. Podolyak also doubted that in two hours the IAEA mission was able to conduct a large-scale examination.

In a helpless rage, Kiev decided not to abandon its extremely dangerous plans. Despite the continued presence of the IAEA representatives at the ZNPP, the Kiev regime made yet another unsuccessful attempt to seize the plant on September 2, which was foiled by the Russian military.

Since then, the Kiev regime has continued to attack the plant on a daily basis. On September 3, the Ukrainian Armed Forces used eight unmanned aerial vehicles with suspended ammunition. Thanks to the actions of the Russian armed forces, the Ukrainian drones approaching the station were blocked, followed by the forced dropping of grenades in unmanned areas at a distance of more than one and a half kilometers from the station’s security perimeter. On September 4, Ukrainian troops used an unmanned aerial vehicle strike. As a result of the actions of Russian servicemen, the Ukrainian drone lost control and crashed one kilometer away from the territory of the Zaporizhzhya nuclear power plant.

On September 5, the Ukrainian Armed Forces carried out a new shelling of the Zaporizhzhya NPP with three artillery charges, one of which hit the roof of special building No. 1, where fuel assemblies are stored, as well as the storage facility for solid radioactive waste.

According to the Russian Defense Ministry, the shelling of ZNPP and Energodar came from the opposite bank of the Kakhovka Reservoir, predominantly from the settlements of Nikopol, Marganets, and Mariivka, which are under control of the AFU. The attacks by the Ukrainian side have resulted in five of the seven power lines at Zaporizhzhya NPP being damaged.

We call on members of the Security Council and the UN leadership to strongly condemn these provocative actions of the Kiev regime, aimed not only against plant employees, but also against international officials – IAEA staff.

The inhabitants of the city of Energodar also continue to be a “living target” for the Ukrainian armed forces. Today alone there have been five artillery attacks on the city. We know, Mr. Director General, that they handed you a collective appeal to stop the Kiev regime’s provocations. This story was widely covered in the media. You told them you would do your best. We would like to ask you to elaborate on this topic. What are your impressions from communication with the residents of Energodar?

We continue to do everything to ensure safe operation of Zaporizhzhya NPP. Its operation is ensured by regular technical personnel with support of Russian specialists. For now the radiation situation at the plant remains normal. But in case the provocations of the Kiev regime continue, no one is immune from more serious consequences. Responsibility for this lies entirely with Kyiv and its Western patrons and all the other members of the Security Council, who have still not found the courage to call things by their proper names and call on Kyiv to stop its reckless actions against the ZNPP, which pose a real threat to international peace and security.

We trust that today the members of the Council will have the courage to do so in order to prevent a possible radiation catastrophe.

Thank you for your attention.