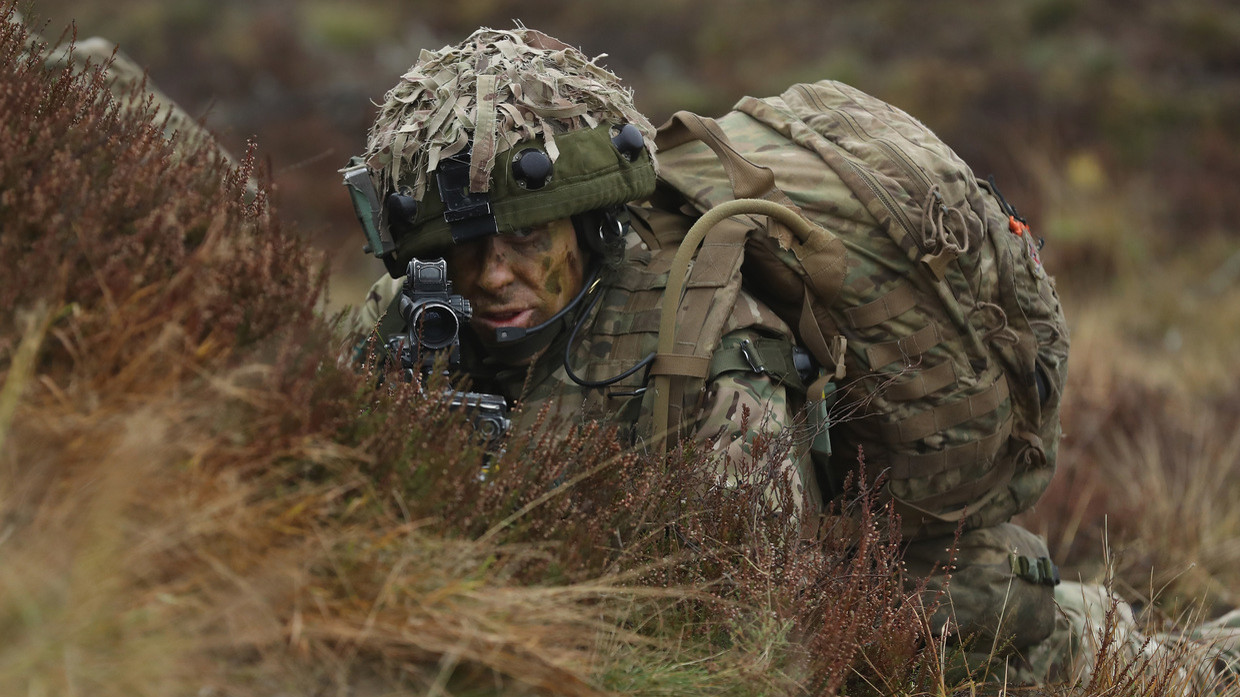 NATO’s plan to vastly increase its forward force is wishful thinking, and the UK’s struggle for military relevance is a perfect case in point

The secretary general of the North Atlantic Treaty Organization (NATO), Jens Stoltenberg, recently announced the US-led military bloc’s goal of expanding its so-called ‘Response Force’ from its current strength of 40,000 to a force of more than 300,000 troops. “We will enhance our battlegroups in the eastern part of the Alliance up to brigade-levels,” Stoltenberg declared. “We will transform the NATO Response Force and increase the number of our high readiness forces to well over 300,000.”

The announcement, made at the end of NATO’s annual summit, held in Madrid, Spain, apparently took several defense officials from the NATO membership by surprise, with one such official calling Stoltenberg’s figures “number magic.” Stoltenberg appeared to be working from a concept that had been developed within NATO headquarters based upon assumptions made by his staffers, as opposed to anything resembling coordinated policy among the defense organizations of the 30 nations that make up the bloc.

Confusion is the name of the game at NATO these days, with the alliance still reeling from last year’s Afghan debacle and unable to adequately disguise the impotence shown in the face of Russia’s ongoing military operation in Ukraine. The bloc is but a shadow of its former self, a pathetic collection of under-funded military organizations more suited for the parade ground than the battlefield. No military organization more represents this colossal collapse in credibility and capability than the British Army.

Even before the current Ukraine crisis kicked off, the British military served more as an object of derision than a template of professionalism. Take, by way of example, the visit of UK Defense Secretary Ben Wallace to Zagreb, Croatia in early February 2022. Croatian President Zoran Milanovic accused the British of trying to incite Ukraine into a war with Russia, as opposed to trying to address Russia’s concerns over the existing European security framework. Wallace flew to Zagreb for consultations, only to be rebuked by Milanovic, who refused to meet with him, noting that he only met with the defense ministers of superpowers, adding that “the UK has left the EU, and this gives it less importance.”

But London keeps putting a brave face on a sorry reality. Take, for example, the offer of written security assurances to Sweden and Finland made by British Prime Minister Boris Johnson. These pledges were designed to bolster the resolve of the two Nordic nations as they considered their applications to join NATO.

But there was no substance to the British offer, if for no other reason than the British had nothing in the way of viable military capability to offer either the Swedes or the Finns. Even as Johnson proffered the proverbial hand of assistance to his newfound Nordic allies, the UK Ministry of Defense was wrestling with planned force reductions that would see the British Army cut from its current “established strength” of 82,000 to 72,500 by 2025 (the actual strength of the British Army is around 76,500, reflecting ongoing difficulties in recruitment and retention.)

Even these numbers are misleading – the British Army is only capable of generating one fully combat-ready maneuver brigade (3,500 to 4,000 men with all the necessary equipment and support). Given the reality that the UK is already on the hook for a reinforced battalion-sized “battlegroup” that is to be deployed to Estonia as part of NATO’s so-called enhanced Forward Presence (eFP) posture (joining three other similarly-sized “battlegroups” fielded by the US in Poland, Germany in Lithuania, and Canada in Latvia), it is questionable whether the British could even accomplish this limited task.

Last month’s deployment to Estonia of a battlegroup comprised of the 2 Rifles infantry regiment underscores the pathos that defines real British military capability. The 2 Rifles Battlegroup includes the three infantry companies and one fire support company integral to the unit, along with supporting artillery, engineering, logistic, and medical elements. France and Denmark provide a company-sized unit to the British-led battlegroup on an alternating basis. Altogether, the British battlegroup comprises some 1,600 soldiers, and is fully integrated within the Estonian 2nd Infantry Brigade.

Given what we now know about the reality of modern warfare, courtesy of the ongoing Russian operation in Ukraine, the British battlegroup would have a life expectancy on an actual European battlefield of less than a week. So, too, would its allies in the Estonian 2nd Infantry Brigade. First and foremost, the units lack any sustainability, both in terms of personnel and equipment losses that could be anticipated if subjected to combat, or the basic logistical support necessary to shoot, move, or communicate on the modern battlefield. Artillery is the king of battle, and the British and Estonians are lacking when it comes to generating anywhere near enough tubes to counter the overwhelming fire support expected to be generated by any hostile Russian force.

Stoltenberg’s hypothetical 300,000-strong Response Force envisions the existing battlegroups to be expanded to brigade-sized formations, ironically tasking the British to generate more combat power at a time when it is actively seeking to reduce its overall manpower levels. While the British may be able to scrape enough substance from the bottom of the barrel, so to speak, to accomplish this projected reinforcement, there would literally be nothing left to back up Boris Johnson’s bold offer of substantive military assistance to Sweden and Finland, leaving the British prime minister looking more like the captain of the Titanic after it hit the iceberg, issuing directives and acting as if his words had any impact, all while his ship is sinking.

Scott Ritter is a former US Marine Corps intelligence officer and author of ‘Disarmament in the Time of Perestroika: Arms Control and the End of the Soviet Union.’ He served in the Soviet Union as an inspector implementing the INF Treaty, in General Schwarzkopf’s staff during the Gulf War, and from 1991-1998 as a UN weapons inspector.