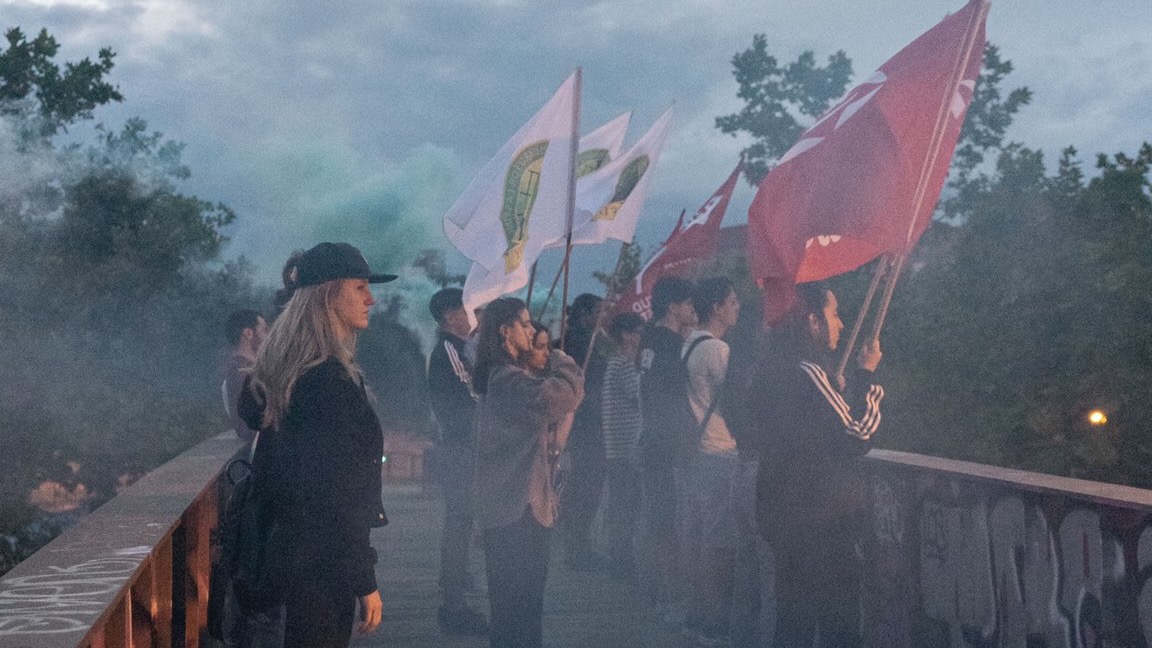 Members of WFDY held a protest in Madrid, Spain during the NATO Summit to demand the release of the Kononovich brothers. Photo: WFDY

The Communist Party of Ukraine has been targeted by successive governments through decommunization laws, smear campaigns, and repression.

The Eighth Administrative Court of Appeal in Lviv, Ukraine ruled on July 5 to uphold the ban on the Communist Party of Ukraine (KPU) and ordered the state to seize the properties of the party.

The Eighth Administrative Court of Appeal stated that in their decision: “We inform you that the court has complied with the requests of the Ministry of Justice of Ukraine: the activities of the Communist Party of Ukraine are prohibited; the property, funds and other assets of the party, its regional, municipal, district organizations, primary organizations and other structural entities have been transferred to the ownership of the State.”

The move is part of a longer campaign of suppression of the party and its views that intensified following the Euromaidan coup in 2014.

After the disintegration of the Soviet Union and the dissolution of the Communist Party of Soviet Union (CPSU) in 1991, the Communist Party of Ukraine (KPU) was revived in 1993, and it emerged as a major political force in the county with a strong representation in parliament until the 2014 Euromaidan coup. The KPU was vocally opposed to the anti-Russian, pro-EU Euromaidan protests in Ukraine and its cadres were brutally targeted by the pro-maidan protesters at places like Odessa.

The persecution of Ukrainian communists intensified following the annexation of Crimea by Russia and Russia’s support to the secessionist war in the Donbass region. The pro-EU government led by Petro Poroshenko accused KPU of supporting the pro-Russian secessionist groups in the Donbass region. In succession, the Ukrainian parliament passed decommunization laws in 2015 and banned the public display of communist symbols and dissemination of communist propaganda. The KPU led by Petro Symonenko was banned from contesting elections, its publication Rabochaya Gazeta was also banned, and many of its cadres including the leadership faced police repression and assaults from far-right groups.

On March 6, following the onset of the ongoing Russia-Ukraine war in February 2022, the Ukrainian security services arrested Mikhail Kononovich and his brother Aleksandr Kononovich, the leaders of the Leninist Communist Youth Union of Ukraine (LKSMU). They have been accused as propagandists with pro-Russian and pro-Belarusian views with the goal of destabilizing the internal situation in Ukraine.

Their trial in the Solomensky District Court of Kiev began on July 1. In the court, the Kononovich brothers stated that “our case is completely fabricated from start to finish. What are we charged with? Pro-Belarussian views are being charged. We are being tried for our views. What kind of democracy can we talk about?”

Following their arrest in March, the World Federation of Democratic Youth (WFDY) launched an international campaign demanding their release. The brothers acknowledged in court the importance of this campaign, “We want to appeal to the European left, to the Federation of Democratic Youth. Thank you, comrades. You are holding actions in Europe near the Ukrainian embassies in support of us so that they let us go, thank you very much. Together we will win!”

In an interview in February 2021, regarding the ban of KPU in 2015, Mykhail Kononovich told Peoples Dispatch that “I emphasize that the communist ideology, the idea cannot be banned by any laws, so it is impossible to ban common sense and science. It is simply impossible to ban the Communist Party of Ukraine (KPU), because we are a party with more than a hundred years of history, a party that has an experience of subterranean struggles. We communists have fought and will continue to fight for the benefit of our people!”.