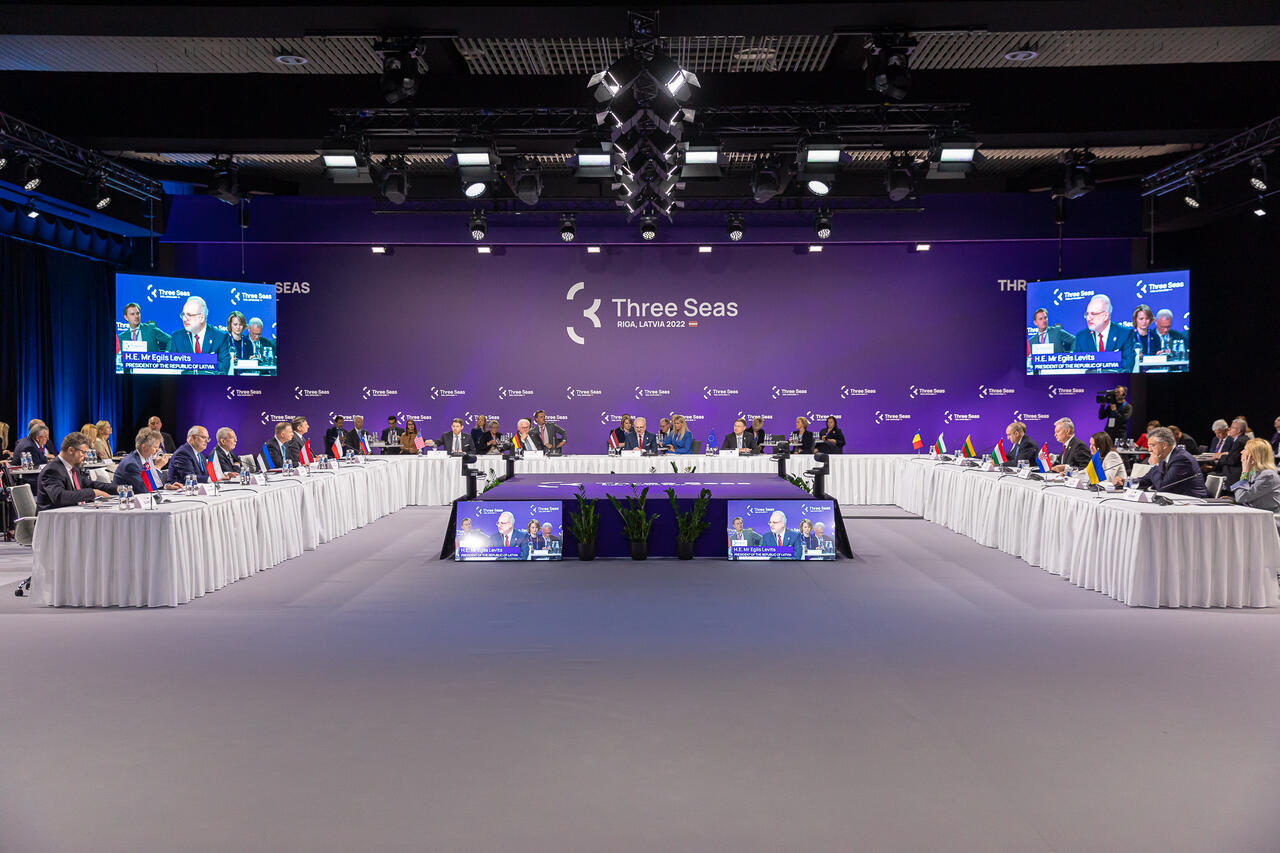 While the Anglo-Saxons have already succeeded in excluding Russia from the Council of Europe and are preparing to prevent it from participating in OSCE meetings, they are working to sink the European Union by creating a competing structure in Central Europe: the Three Seas Initiative. In doing so, they are taking up an old Polish project aimed at developing this region while preserving it from any German or Russian influence.

The Council of Heads of State and Government of the European Union decided on January 23, 2022, to grant Ukraine the status of a country applying for membership. The president of the European Commission, Ursula von der Leyen, said that it will take a long time (Turkey has had this status for 23 years) to bring the country up to the level required by the Union, both in economic and political terms.

The office of the Ukrainian president had already specified that Kiev does not hope to join the Union, today or tomorrow, because it has another project, but that the status of candidate opens the way to strong financial support from Brussels to get closer to the standards of the Union.

Indeed, Ukraine shares the Polish project of Intermarium: an alliance of all states located between the Baltic and Black Seas. 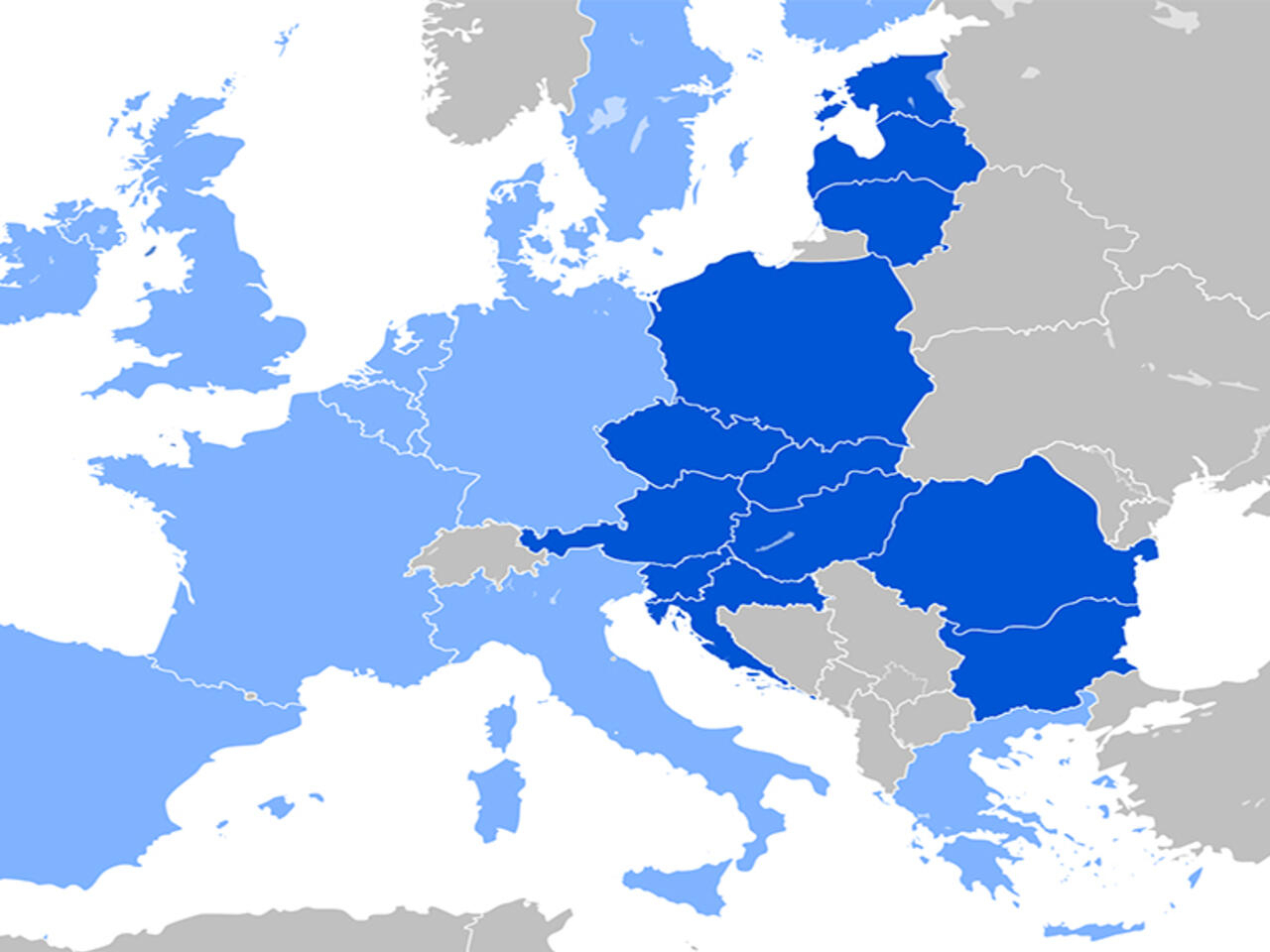 The member states of the Three Seas Initiative (in dark blue).

This project is based both on a geographical reality and on a historical past: the “Republic of Two Nations” (Crown of Poland and Grand Duchy of Lithuania) from the 16th to the 18th century. It was first formulated during the Polish revolution of 1830 by Prince Adam Jerzy Czartoryski, and then during the interwar period by Polish General Józef Piłsudski, under the name “Międzymorze Federation”. At the same time, Piłsudski conceived an ideology aimed at liberating all the peoples of Central Europe from their integration into the Germanic and especially Russian empires, “Prometheism.” Like a Titan, he promised men technical progress that would allow them to free themselves from their overlords. In practice, he preferred the Germans to the Russians and did not hesitate to ally himself with the Austro-Hungarians and the Germans against the Tsar. In 2016, a third version of this project was presented by the Polish president, Andrzej Duda, under the name “Three Seas Initiative” (the third sea is the Adriatic). Eleven states participated. They have been twelve for a few days.

In principle, this project offered a legitimate political response to the lack of physical borders in the great plain of Central Europe: better to unite than to submit or to wage war. However, things are not as clear-cut as they seem: the Republic of Two Nations was a confederation allowing the Kingdom and the Grand Duchy to each keep their own functioning, while Piłsudski imagined a Federation in which each people would merge and in which the Poles would hold the upper hand. All nationalist movements in Central Europe refer to the Republic of Two Nations, but they draw quite different conclusions from it.

For the Ukrainian Banderists, the Republic of Two Nations is the heir to Ruthenia created by the Swedish Vikings, the Varegues, which is a bit far-fetched since their territories do not overlap. The most that can be said is that, culturally, these entities have points in common. For the Ukrainian president, Volodymyr Zelenski, the Republic of Two Nations is a good example of a confederation that makes it possible to free oneself from both Russia… and Germany, which dominates the European Union.

It is because the Polish and Ukrainian political leaders are banking on this common project of an Intermarium confederation that President Zelensky was able to consider without blushing to cede Eastern Galicia to Poland [1]. However, in both countries, the extreme right (in the totalitarian sense of the interwar period) intended to use this policy to advance its racial ideas.

Poland has never played the game of the European Union, of which it has been a member since 2004. During its candidacy for the Union, it did not hesitate to take huge sums of money intended to reform its agriculture and to spend them on buying American warplanes and waging war in Iraq on Washington’s orders. This sleight of hand was imagined by the Polish-American Zbigniew Brzezinski and the French-American Christine Lagarde [2]. Nothing has changed: today Warsaw is in perpetual dispute with Brussels, notably over its judicial system. Ukraine will have no trouble playing the same double game.

This is the main problem of the peoples of Central Europe: they rightly seek to assert themselves without their large Russian and German neighbors, but they are unable to do so without fighting against them. in the past, this pathology has always led them to confront each other.

Prince Adam Jerzy Czartoryski ended his life in exile in Paris, and General Piłsudski set up the headquarters of his Promethean movement also in Paris. In both cases, it was a matter of fleeing both Germany and Russia. The memory of this period gave rise in 1945 to the creation of a network of Central European émigrés working first for the Vatican and then for the French secret service and finally for the Anglo-Saxons (a network also called Intermarium [3]). It brought together the main fugitive leaders of the Croatian Ustasha, the Romanian Iron Guard, etc. Then, in 1991, the “Visegrád Group” (Hungary, Poland, Czech Republic and Slovakia) was formed. Today the supporters of this project are turning to the Anglo-Saxons, hence the support of Washington and London to Warsaw and Kiev. Thus, the summit of the Three Seas Initiative, in Warsaw in 2017, received U.S. President Donald Trump. While at the summit on June 20, 2022, the Ukrainian president, Volodymyr Zelenski, intervening by video, requested and immediately obtained the membership of his country.

The Anglo-Saxon interest in the Intermarium project is long-standing. One of the fathers of Anglo-Saxon geopolitics, Sir Halford Mackinder, identified Central Europe as the heart (Hartland) of Eurasia. For him, the British Empire could only control the world by first controlling this region. One of his disciples, Prime Minister Boris Johnson, therefore rushed to Kiev to support President Zelensky. All Anglo-Saxon geopoliticians have taken up Mackinder’s ideas, including of course Zbigniew Brzezinski, who, along with the Straussian Paul Wolfowitz, was one of the two main figures at the Washington conference in 2000, which marked the alliance between the United States and Ukraine [4].

Unfortunately, those who are pushing the United States to support the Intermarium project are representative figures of far-right nationalism. For example, the advisors to Presidents Dwight Eisenhower and Ronald Reagan who pushed them to adopt the concept of “captive nations (of the USSR)” were all former collaborators of the Nazis, members of the Anti-Bolshevik Bloc of Nations [5]; the organizers of the aforementioned congress in 2000 were their children; and the most important of them is the US-Polish Marek Jan Chodakiewicz, who is constantly downplaying the crimes of the Nazis [6].

In the long run, this logic should lead the members of the Three Seas Initiative to collectively leave the EU when it is no longer financially beneficial to them, as they have never shared its political objectives.

Already, the entire security architecture of the continent is being called into question. It was based on two pillars, the Council of Europe and the Organization for Security and Cooperation in Europe.

RUSSIA PUSHED OUT OF THE COUNCIL OF EUROPE

The Council of Europe was established in 1949. For some founders, it was a question of basing European unity on common legal principles via a council of states, and for others, via an assembly of parliamentarians. In the end, both projects were brought together, but at the time the Soviets and their sister countries were kept out. The USSR and the members of the Warsaw Pact joined just after the fall of the Berlin Wall.

This Council has two flagship institutions. First, the European Court of Human Rights (ECHR). Unfortunately, the Court has become politicized in recent months, showing an obvious bias towards Russia. For example, in January it recognized the right of a Russian citizen to spit on the official portrait of the President of the Russian Federation (Karuyev v. Russia). In February 2022, it recognized the right of a Russian citizen to disrupt a pro-Putin demonstration by displaying a sign reading “Putin is better than Hitler” (Manannikov v. Russia). And it has just censured the Russian law that was adopted after the color revolutions requiring foreign-funded political organizations to display it on all their publications (Ecodefence and others v. Russia).

The other major institution was the Venice Commission, which helped the newly independent states to assimilate democratic rules – a Commission which, incidentally, has constantly warned Ukraine about its administrative and institutional procedures [7].

In the end, the West suspended Russia’s right to vote in the Council of Europe on the grounds that it would try to annex Ukraine by force. Russia was astonished and replied that it had never intended to do so and that it was withdrawing from an institution that had become partisan.

The other intergovernmental platform is the Organization for Security and Cooperation in Europe (OSCE). It was created in 1973 during the Helsinki Accords. Unlike the United Nations, it is not a place of arbitration, but just a forum that allows all the actors of the continent to talk freely. For example, it adopted the Istanbul Declaration of 1999, also known as the “Charter for Security in Europe”, which sets out two major principles: (1) the right of each state to choose the allies of its choice and (2) the duty not to threaten the security of others by ensuring its own security; principles whose non-observance is at the origin of the conflict between the United States and Russia [8].

It should be remembered that the Russian Federation has never challenged the right of anyone to join NATO, but the right of NATO members to host US military bases. Our readers will remember that when Russian Foreign Minister Sergey Lavrov wrote to each of his “partners” asking how he could reconcile the two Istanbul principles with the installation of US military equipment and personnel in the vicinity of Russia, none of them dared to answer him.

However, the neutrality of this forum was violated in April when new OSCE officials, more precisely former Nato soldiers, were caught spying in the Donbass [9].

As if this were not enough, the United Kingdom has just refused the necessary visas to the Russian delegation that was to attend the annual OSCE parliamentary assembly from July 2 to 6, 2022 in Birmingham. London, which is in violation of its obligations, took shelter behind the European Union’s nominal sanctions against each member of the delegation.

As a result, not only are the documents signed by the 57 OSCE heads of state and government worthless, but the administration of this organization has become a weapon of war, and ultimately it will no longer play its role as a forum.

The security architecture of the European continent is thus being radically transformed. Eventually, Central Europe will form a bloc, first within the European Union and its candidates, then outside the Union. Its defense will be guaranteed by the United States. While the two parts of the continent, West and East, will no longer speak to each other. This will be the outcome of the plan of Anglo-Saxon geopoliticians. But this project, if it is realized, will be unstable. First of all, Western Europeans have always needed Russia, and secondly, the peoples of Central Europe have long lived on a battlefield. When the Teutonic knights and the Cossacks did not come to fight in their own country, they fought among themselves. For a lasting peace, it is necessary to respect all the protagonists. By destroying all the security institutions of the continent, we make a generalized conflict inevitable.

[6] lntermarium: The Land between the Black and Baltic Seas, Marek Jan Chodakiewicz, Routledge (2012).

[7] Opinions of the Venice Commission for Ukraine.

[8] “Russia wants to force the US to respect the UN Charter”, by Thierry Meyssan, Translation Roger Lagassé, Voltaire Network, 4 January 2022.