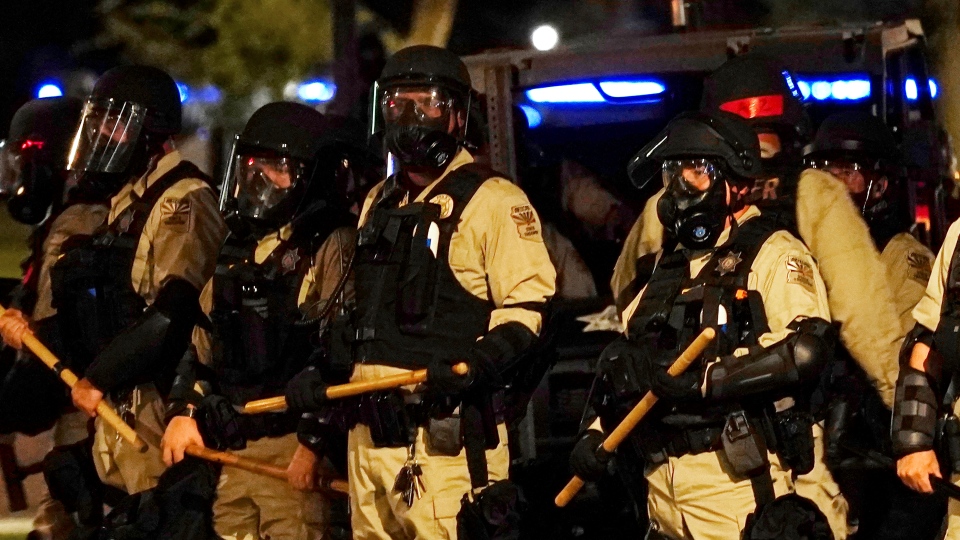 In front of us, something is unfolding that we don’t want to properly see, but that we subconsciously recognize. The warning signs for a fascist crackdown in America have been here for years, if not decades. It’s now that they’ve become too big for much of this country’s complacent left to ignore. We’re accelerating towards a level of direness which people living under fascism so often can’t perceive at first, until the reality of their situation has finished creeping up onto them. By George Jackson’s definition of fascism, which is when capitalism forcibly maintains itself through reform, we’ve already been living under fascism for generations. With the Supreme Court’s decision and its ramifications, this is becoming more visible to more people.

When Roe v. Wade was overturned, snipers were set up on top of the Supreme Court building. The premises were surrounded by a tall fence and armed guards, like our government was admitting that it had just done something against the wishes of the popular majority. Police have been reacting to the protests with another wave of state-sanctioned violence, beating peaceful demonstrators and clearly identified journalists. Reactionary vigilantes have been carrying out these kinds of atrocities in tandem with law enforcement. As was the case during the state’s counterinsurgency against the George Floyd protests, the state is manufacturing narratives to justify waging war against dissent, with officials issuing warnings about “extremism” from abortion supporters. Far-right lawmakers are establishing systems for citizens to inform on each other, providing financial rewards to those who report women who try to get abortions. Immediately following the Roe ruling, the Court decided to let Christian teachers pressure students into praying. This supports the idea that LGBT rights, free expression rights for non-Christians, and even racial equality laws will come under attack due to the precedent that this ruling has set.

This is the cycle that the United States is going through amid its decline. As Washington loses its global primacy, and the foundations of capitalism weaken, the ruling class is reacting by allying itself with our society’s most extreme reactionary forces. Rights get stripped away as these extremists gain power, and use our deteriorating conditions to rally support for their cause from their reactionary base. When the people fight back, the state meets them with state and vigilante violence, the perpetrators growing more bold and brutal every time. The definition of a “terrorist” or “extremist” keeps expanding when it comes to those fighting for human rights, while growing more lenient when it comes to fascist terrorists like Kyle Rittenhouse.

Since the 2008 economic crash, the country has been in one long depression, currently worsening with the pandemic and the Russia sanctions blowback. The ruling class has long known that our institutions are breaking down in their ability to provide for the basic needs of the people, and that the U.S. is descending into failed state status. These measures are the reaction from religious fanatics who see our crisis as a mandate for waging war against perceived sinners, and who are increasingly enabled by our political system due to the repressive role they fulfill.

Trump, the president who appointed the justices which made this decision possible, did the bidding of the Christian fascists out of opportunism. The obsessive efforts by fundamentalists to gain control over the country’s institutions, where they’d systematically campaigned to reshape the courts, the schools, and the legislatures in their image, had already made the Republican Party synonymous with their agenda. They were the ones headed to take full control over the decaying imperialist state, so Trump surrounded himself with them and carried them to their current victory. All they had to do was climb the structure of a declining bourgeois “democracy” that’s gotten more vulnerable to anti-democratic takeovers the more its supporting economic structures have weakened. It’s not like the Democrats would stop them, and it’s not like our hypocritical settler-colonial constitution would either. They’ve been able to rip through our political system with ease.

Hitler and Mussolini came to power in the equivalent ways. Not by overthrowing their governments, but simply by making themselves visible to the bourgeoisie as a fighting wing for capital, capable of repressing the communists and preventing revolution. In Italy, there was a conspiracy between the monarchy, the army, the landowners, the industrialists, and the Catholic Church to let the fascists seize power, so scared these forces were of the communists winning.

Using fascism’s historic social base in the petty bourgeoisie, Mussolini fulfilled this mandate by the propertied classes and the traditional authorities to defend the existing social order by any means necessary. Hitler did so as well upon being appointed chancellor, which happened after backroom negotiations between Germany’s industrialists and their partnered governmental officials. He and his paramilitary forces then eliminated the communists and minorities who the racist ruling class, which included the many U.S. industrialists aiding the Nazis, saw as threats to be expended.

As the American fascists continue to construct their Christian nationalist surveillance state, incentivizing neighbors to sell each other out to law enforcement for violating the new lifestyle code, fascism’s apologists will claim it’s absurd to be alarmed by any of this. They’ll use variations of the “you have nothing to fear if you have nothing to hide” rationale, and portray the violence from police and vigilantes as in response to exaggerated or fabricated pro-abortion violence. All the while, the range of people targeted by this repressive religious campaign will grow. If people can get bounties for sending mortally ill women to prison for seeking medical care, perhaps the rewards will then be expanded to those who report undocumented people. If tech companies aren’t saying whether they’ll start giving law enforcement data on people’s private plans for abortions, they’ll no doubt begin lending a powerful hand to this project for catching those who defy the Christian fascist agenda. Big tech has helped the government carry out repressive campaigns like the Russiagate censorship, so they’ll fold when it comes to this.

Next these forces will go after protesters, and organizers, and anyone who voices opposition to the new abortion paradigm. The LGBT community, journalists, anti-imperialists, and others targeted by our government will be part of this list as well. The fascist paramilitaries will be deputized to go after these groups, with communists being among the first to be violently confronted as they were during past fascist purges. When another mask-off fascist gets into power in 2024, such repression will become not just plausible, but to a certain extent inevitable. The War on Terror showed that the U.S. is capable of abandoning its constitutional liberties, such as privacy, and rationalizing everything from extrajudicial imprisonment to torture. Our current liberal government, discredited, paralyzed, and ineffectual, will soon give way to one that seeks an active acceleration of these trends.

The state is more vulnerable than it’s ever been, its “democracy” more corrupted than ever by corporate influence. It’s on the verge of fully revealing itself as a fascist entity, as a parasitic presence which will do whatever it can to keep the bourgeoisie in power. The people from oppressed nations have long recognized this as such, because they’ve been living under something indistinguishable from fascism since the beginning of colonialism. Now colonialism’s violence is intensifying, and getting expanded to an ever growing range of the population.

This is what it looks like when an empire cannibalizes itself. Our society is unable to face the reality of its unfolding collapse, of Washington’s international loss of respect and influence, of our government’s utter failure to fight the pandemic, of our gargantuan decline in living standards. It’s embracing delusion, turning to conspiracies about foreign subversion plots and imagining that a return to traditional values will solve our crises. The left is embracing its own delusions in turn, positioning itself as the vanguard of the world revolution even though it has everything to learn from the successful liberation movements on the imperial periphery. Virtually every faction that supposedly opposes the fascists is undermining any actual anti-fascist movement, exploiting our human rights crisis for donations, engaging in sectarian attacks, and downplaying the threat we’re facing. Fascism can only be defeated by a principled, dedicated revolutionary network, capable of defending our communities and building support among the masses for the state’s overthrow.