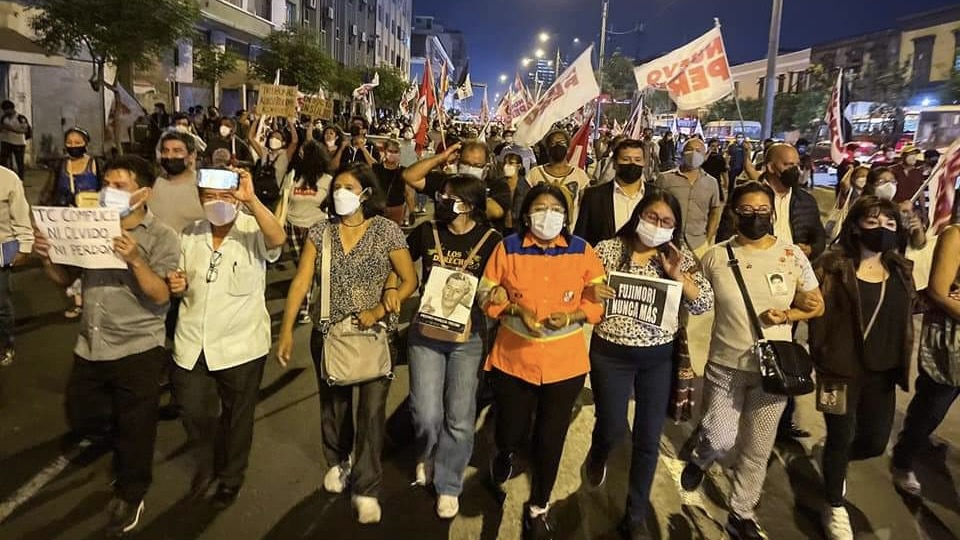 On March 19, thousands of Peruvians took to the streets in different cities to demand revocation of the pardon granted to former dictator Alberto Fujimori. Photo: Twitter

Last week, on March 17, the Constitutional Court of Peru declared the habeas corpus filed by the defense of imprisoned former dictator Alberto Fujimori admissible and reinstated a controversial pardon granted to him by former President Pedro Pablo Kuczynski (July 2016 – March 2018) in December 2017. 83-year-old Fujimori has been serving a 25-year prison sentence since 2009 for crimes against humanity and corruption committed during his regime (July 1990 – November 2000). According to reports, he is set to be released on Thursday, March 24.

In 2017, when Kuczynski was facing an impeachment process in Congress, he signed and promulgated a supreme resolution granting humanitarian pardon to Alberto Fujimori on medical grounds. However, critics at the time pointed out that it was a part of a deal, which is currently under investigation, with the former dictator’s youngest son, Kenji Fujimori. Kenji Furjimori, who was a legislator at that time, had offered the support of the legislators of his sister Keiko Fujimori’s far-right Popular Force party for the no-confidence motion, which Kuczynski won with a slim margin.

Nevertheless, the pardon was annulled by the first instance of the Supreme Court in October 2018 on the grounds that it was granted illegally. The Court concluded that the procedure was irregular, contrary to international standards, peculiarly fast, and that the medical records supporting Fujimori’s ill health had inconsistencies.

Now, years later, the Constitutional Court, declared the appeal by lawyer Gregorio Parco Alarcón against the Supreme Court resolution issued five years ago founded and ordered Fujimori’s immediate release. The ruling was justified stating that the health of the former dictator was delicate.

On the evening of March 17, hours following the announcement of the verdict, thousands of Peruvians took to the streets of Lima, Cusco, Trujillo and Arequipa, among other cities, to protest against impunity, corruption in the judicial system and political influence that led to the outcome and injustice. They demanded that President Pedro Castillo annul the pardon.

The mobilizations were called for by the No to Keiko social movement, left-wing New Peru party, in addition to various civil rights and student organizations.

On March 19, once again, under the banner of “Pardon is Insult” massive mobilizations were held in Lima, Arequipa, Cusco, Tacna and Puno cities. In the capital Lima, hundreds of citizens gathered at the Plaza San Martín and marched to the Constitutional Court to demand the revocation of pardon.

The three judges who voted in favor of Fujimori were revealed to have connections with Fujimorismo. Peruvian alternative media outlet Wayka Peru reported that Judges José Luis Sardón, Ernesto Blume and Augusto Ferrero had been linked to Fujimori at different times. Sardón financed eight Popular Force congressmen through his NGO Democratic Reflection in 2011, Blume supported the unconstitutionality of Keiko Fujimori’s pre-trial detention in 2019, and Ferrero confessed to meeting with the Popular Force caucus before his election as a member of the Court in 2019.

Besides being rejected in the streets, the Constitutional Court’s ruling has received widespread national and international condemnation.

President Pedro Castillo condemned the decision, stating “the institutional crisis to which I referred to in my message to Congress is reflected in the last decision of the Constitutional Court,” adding that “the international justice bodies to which Peru is attached and the rule of law must safeguard the effective exercise of justice for the people.”

For his part, PM Anibal Torres said that the government would respect the court’s decision, but criticized the ruling. “There are several prisoners who die in prison, that is nothing new. Prisoners must serve their sentence and in the case of Fujimori, he had a golden prison. He should have served his sentence or paid compensation,” said Torres in conversation with Exitosa Noticias.

Several other ministers and members of the ruling left-wing Free Peru party and its allies also rejected the verdict. Many questioned the autonomy and integrity of the country’s highest court. Vice Minister of Justice Juan Carrasco Millones announced that the government would resort to international justice institutions, such as the Inter-American Court of Human Rights, to protect Peruvians’ rights against the court’s decision.

Vladimir Cérron, Free Peru’s founder, decried that “how long will they not understand that the decisions of the Constitutional Court and the Supreme Court of Justice have a high political component, proof that nothing is alien to this phenomenon, because in society everything is linked, there is nothing independent of anything.” Cérron added that “the crimes committed by Alberto Fujimori are crimes against humanity, not only against Peru, therefore, the final judgment will be made by an international court.” Cérron also called on President Castillo “to proceed with a comprehensive judicial reform in the country,” highlighting that “the neoliberal institutions do not serve anymore.”

Legislator María Agüero Gutiérrez of the Free Peru party, criticized that “the fraudulent pardon born of a “lobbysm” of Pedro Pablo Kuczynski’s right-wing government was ratified by an expired Constitutional Court. It is an insult to human rights and to Peru’s memory.”

Former PM Mirtha Vásquez also rejected the ruling, stating that “the Constitutional Court violates the memory and the right to justice of the victims of the dictatorship of the 1990s, by ordering the release of Alberto Fujimori, convicted of crimes against humanity. This government must immediately go to the Inter-American Court of Human Rights and guarantee that there is no impunity!”

Former cultural minister Gisela Ortiz, sister of Luis Ortiz, a victim of the La Cantuta massacre, also rejected the ruling. “As family members, we feel that our right has been violated. We are facing a Peruvian State that does not guarantee rights. We have to continue appearing before the Inter-American system to draw its attention so that it obligates the Peruvian State to guarantee the right to justice of the victims, as well as the due process in pardon cases,” Ortiz said in an interview with RPP.

The Inter-American Commission on Human Rights (IACHR) also expressed grave concern over the Constitutional Court’s decision. The IACHR reiterated that “the restoration of Alberto Fujimori’s pardon would be a decision contrary to the international obligations of the State of Peru” and stressed that “it must adopt necessary measures to restore the rights of the victims and their families affected by this decision.”

The United Nations Human Rights Office, on March 18, via twitter, expressed its disapproval of the ruling. “Following yesterday’s decision by the Constitutional Court reinstating the pardon of ex-president Fujimori, we stress that international HR law restricts amnesties or pardons in cases of serious HR violations. Victims’ rights to justice and the rule of law must be respected,” stated the organization.

Erika Guevara-Rosas, Americas director at Amnesty International, also lamented that “the Constitutional Court of Peru grants pardon to Alberto Fujimori, convicted of crimes against humanity in Peru, turning its back on thousands of victims and their families, and seriously violating their rights to truth, justice and reparation.”

During Fujimori’s dictatorship in the 1990s, a series of human rights violations were committed. These included the crimes of aggravated kidnapping, forced disappearance and murder of thousands of leftist guerillas and of those accused of pertaining to insurgent groups, forced sterilizations of thousands of Indigenous men and women, among others.

In 2009, he was found guilty as an indirect perpetrator of the Barrios Altos massacre, in 1991, and the La Cantuta massacre, in 1992. In the first case, Fujimori pleaded guilty to the murder of 15 people, including an eight-year-old child, who were allegedly members of the Shining Path rebel group. In the second, Fujimori was charged with the abduction, torture, murder and clandestine burial of eight students and a professor of the Enrique Guzmán and Valle National University.

In 2000, when the Parliament geared up to impeach Fujimori over charges of corruption, he fled to Japan. He was arrested in Chile in 2005 during a private visit and extradited to Peru in 2007. Later, the Peruvian courts found him guilty on various charges, such as financing the human rights violations perpetrated by death squads in the two human rights violation cases and ten corruption cases. He was sentenced to serve an aggregate of 25 years in prison.