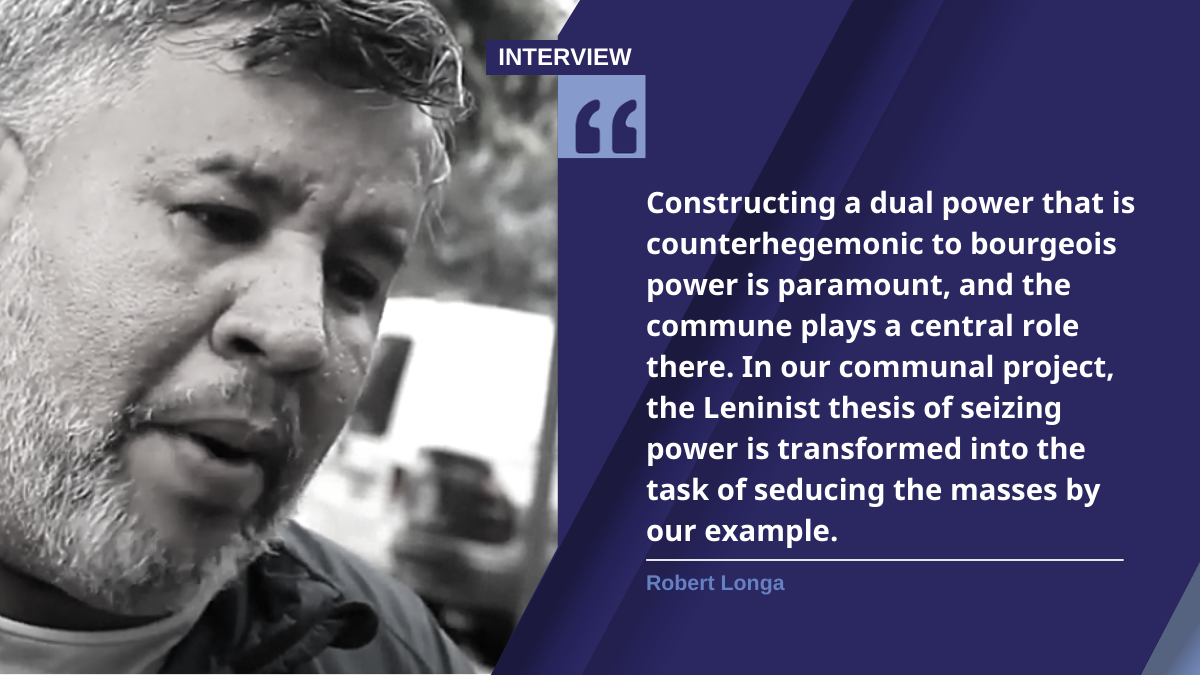 A key spokesperson of the Alexis Vive Patriotic Force talks about the challenges of building an urban commune.

The Alexis Vive Patriotic Force was born in the working-class barrio 23 de Enero during the 2002 counter-coup. The organization, which considers itself both Guevarist and Leninist, aims to carry out Chávez’s project of building socialism through communes. To that end, in 2006 they formed the El Panal Commune, which produces both basic goods such as bread and clothing along with revolutionary culture. This interview with its main spokesperson, Robert Longa, sheds light on that communal project and the organization’s vision of the future.

Thirty years ago, on February 4, 1992, Hugo Chávez became a household name as the leader of a military insurrection. How was his influence felt in the 23 de Enero barrio?

I am, first and foremost, a son of the Caracazo, but Chávez gave strategic direction to the masses that had spontaneously rebelled in 1989. He also redefined the revolutionary subject, reminding us that the Venezuelan military – which comes from the working class, not from the elites – can have an important role in the transformation of society.

February 4th, 1992, opened a new course in the history of our country. After the collapse of the Soviet Union and the so-called “end of history,” Chávez’s insurrection gave us hope: another future for Venezuela was possible.

The spirit of the 1989 Caracazo and the 1992 military insurrection is alive and well in the El Panel commune. What is the secret?

In a section of his reflections on war, Che wrote that the material stimulus is not enough, that there has to be a moral stimulus when the objective is socialism. This is central to Che’s interpretation of [the shortcomings of] the Soviet Union.

Our experience teaches us: while natural leadership and economic autonomy are important for building a commune, consciousness is key. We think that the vanguard is important, but it has to dissolve into the commune.

Constructing a dual power that is counter-hegemonic to bourgeois power is paramount, and the commune plays a central role there. In our communal project, the Leninist thesis of seizing power is transformed into the task of seducing the masses by our example.

We have to reach a point of no return.

Chávez talked about the point of no return, but it sometimes seemed to embody an idealist or metaphysical thesis. After all, all things human can be reversed. What does the “point of no return” or irreversibility mean for you?

Of course, from a dialectical perspective, we understand that contradictions are permanent and all human constructions are reversible. When Chávez talked about irreversibility, I think he was talking about initiating something that would negate the current state of affairs.

For us, this means building subjective and objective conditions so that the communal project becomes viable.

Four years ago, in the midst of the economic war, we deployed working brigades around the country, we launched our currency, etc. In this way, we advanced but we also had setbacks. Now, after the hiatus of the pandemic, we are rebuilding our offensive, and a process of self-critical reflection has led us to understand that formation and education are of central importance. We also think that, for the commune to really grow, it must be economically self-sufficient, efficient, and work toward the people’s emancipation.

We are building strategic autonomy as we speak. The commune cannot be subordinated to what there is. El Panal has had its cooperative, transition process. Now we have to confront and combat the capitalist ocean: our tactics cannot be determined by our context. Wage labor cannot organize our work.

We think that a commune should not just be a pretty facade that remains dependent on the system in place. Communes cannot be beggars constantly seeking state resources either. A commune is a full-blown construction, and autonomous popular power must be at its core.

What is the main obstacle to commune-building here? Is it the blockade, the economic crisis, or internal reformism? Or is it a combination of all three?

The challenges are many: all those and many more, including the dominant ideology, which tells us that nothing can change, that you must consume, that you are what you own. That is why the [2001] Porto Alegre Social Forum slogan remains important to us: another world is possible… and to that slogan, we concur with Chávez’s addendum: a better world is possible if it is socialist.

But for that new world to emerge we need to strengthen our ideological preparation and acquire technical and scientific skills. This has implications in the individual and collective spheres, and it is why we often think about Mao’s cultural revolution. If consumerism is what defines common sense in capitalism, collectivism must define our way of thinking.

Building a commune in what you call the “capitalist ocean” represents an enormous challenge, but building an urban commune is even harder. Social property of the land is not really an option in urban environments and people are more co-opted by capitalist alienation. How do you fight back?

Yes, we face many challenges. But I would say that any commune, whether rural or urban, has to overcome alienation and the temptation of building a showpiece detached from the people.

Caracas residents are used to the comforts offered by the oil rent and may be less willing to make sacrifices, but if you are building a commune in the campo where you aren’t constantly haunted by the shopping mall, you will face other challenges: perhaps to get to a meeting you have to walk hours or jump on a boat. Or you may have real problems getting the tools or machinery that you need to grow your crops.

The biggest challenge that we face now – and this goes for both urban and rural communes – is the decomposition triggered by the crisis. Material objectives have overshadowed dreams. That is why we say that to eradicate the capitalist metabolism, we have to be able to seduce the masses into thinking – along with Chávez – that another world is possible.

A commune cannot be a club of friends who simply chat about the revolution but have no links with the pueblo. When it comes to urban communal construction, this means working with the lumpen neighbor and with the barrio malandro to bring them over to our side. But for this to happen the new model has to be tangible.

When we lost Chávez, an important part of the population lost hope. Today, we have to seduce the people again and rebuild hope.

Beyond the productive projects and the educational initiatives, what does El Panal Commune do to seduce the pueblo?

We combine tactical objectives with our strategy. Our strategy is the commune, but we also offer solutions to specific problems. We are building an economic district with a communal bank that should be able to address the needs of the community. Our means of production are growing and should be at the service of the pueblo. We also work to ensure that schools stay open, etc.

Finally, we foster recreational spaces for the youth, sports competitions, dance demonstrations, etc. In other words, a commune should present a form of life that is not only work and study, but also recreation and play.

The loss of hope that you were mentioning earlier went hand in hand with a shift toward pragmatism at the governmental level. What should be done to re-introduce Chávez’s ambitious dreams and projects back into Venezuelan society?

Chávez left us a legacy that is larger than life, and President Maduro has done what is in his reach so that we will not be trampled by the imperialist boot. Now is the hour of the popular movement. The bourgeoisie, both old and new, advances with an individualistic project that fagocitates life. Meanwhile, the working class has been penetrated by the ideology of consumerism. It is the time to show that the market is not going to solve our problems: the path is the commune.

Like Che, we have to keep our battle fatigues and our boots on. However, our battlefield now is not the Sierra Maestra, our battlefield is one in which the walls of consumerism and individualism divide the working class. We have to bring those walls down, and in the new spaces that open up, we have to show that the commune is not only a viable project, but it offers a better alternative to working people.

Popular power and the abolition of the bourgeois state, that is our collective horizon as communards. Will we be able to do it? I don’t know, but we are at a crossroads between life and death. For our part, we are placing our bets with life, and we are doing everything we can to overcome capitalism’s death drive.

Of course, this takes a lot of work. As Trotsky would say, the revolution is not a matter of one day, it’s not the storming of a government building: a revolution is a permanent affair. For us, at El Panal Commune, this means carefully planning an economic model that is autonomous, building an educational project that will prepare us both ideologically and technically… And we must, as I said before, seduce the pueblo with a tangible, communal self-government that offers a real alternative.