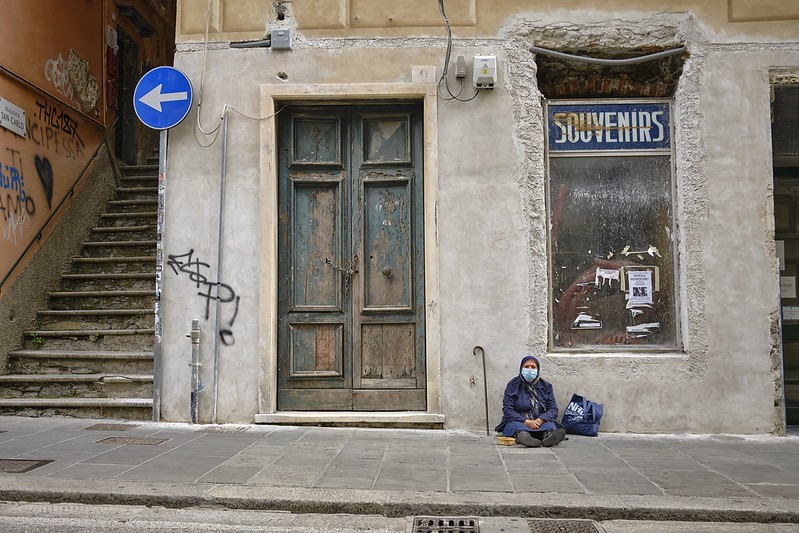 The pandemic has created the perfect pretext for enacting economically destructive policies.

On January 19, 2020, Washington state reported the first US case of coronavirus. By the end of March, 245 million Americans were under stay-at-home restrictions to “flatten the curve.” Mainstream news terrorized the public with exponential graphs, threats of a medical supply shortage, and displays of hygiene theater. Appeals to science were weaponized to enforce conformity, and the media portrayed anti-lockdown protesters as backwards, astroturfed white nationalists bent on endangering the public.

Today millions of Americans have fallen into poverty or are on the verge of destitution. Stimulus money has largely been used as a handout to corporations, and over 160,000 small businesses have closed. In March and April 30 million Americans filed for unemployment. Now temporary job losses are becoming permanent. 12 million unemployed people may see their benefits lapse even if Congress passes a new aid deal. Homelessness is spiking, 11.4 million households owe $70 billion in back rent and fees, and 40 million people are at risk of eviction. In some states, food bank lines stretch for miles, and 1 in 4 children are expected to experience food insecurity.

Meanwhile, Walmart and Target reported record sales. Amazon tripled its profits and Jeff Bezos made $70 billion. Billionaires have collectively made over $1 trillion since March. Alphabet, Amazon, Apple, Facebook, and Microsoft now make up 20% of the stock market’s total worth. The tech industry has achieved an unparalleled level of wealth and dominance. Data, which has been more valuable than oil since 2017, is expected to expand its economic footprint.

“This is not an unforced error or a good policy idea implemented poorly. It is an economic agenda disguised as a health protocol.”

Unemployment, hunger, institutional breakdown, and the destruction of social bonds are not symptoms of a virus. They are the indirect violence of class warfare. The pandemic is a convenient scapegoat for the largest upward wealth transfer in modern human history. Under the pretext of a public health policy, elites have successfully waged a counterrevolution that will result in the erosion of working conditions and quality of life for generations to come.

Death, disease, and pandemics have always been part of human life and they always will be. 2.8 million Americans die every year and 56 million people die worldwide. Each year 1.3 million people die of tuberculosis, 445,000 die of malaria, and 290,000-650,000 die of influenza. In 1968 1-4 million people died in the H2N3 influenza pandemic, during which businesses and schools stayed open and large events were held.

Indefinite closures have never before been used as a disease control method on a global scale. These experimental restrictions were shaped by the discredited Imperial College Model which predicted 2.2 million US deaths. Many epidemiologists and doctors questioned these doomsday projections and pointed out that there was not sufficient data to justify lockdowns. The virus has a low mortality rate, especially for people under 65, and 94% of US covid deaths have occurred with comorbidities. Most statistical analysis does not show lockdown measures to be an effective strategy for reducing mortality.

In March unprecedented policies were rationalized through shocking stories and videos from northern Italy. The region’s crowded ICUs were presented as a warning for the rest of Europe and the US. Unknown to many was the fact that Lombardy had been severely impacted by ongoing privatization efforts and a shrinking hospital system regularly overwhelmed by influenza. This omission by mainstream media played a key role in developing the mythology that economic shutdown could magically eradicate a virus. In reality lockdowns have accelerated a cycle of austerity and created a self-fulfilling prophecy of perpetual crisis.

Chronic understaffing and lockdown-induced layoffs in nursing homes severely exacerbated covid’s death toll. 40% of US covid deaths are linked to nursing homes. 1 in 6 covid deaths in Vermont were from a single facility. In New York (the state with the second highest covid deaths per million) hospitals sent over 6,300 elderly covid patients back into nursing homes. Unprotected, underserved, and alone, the elderly are also afflicted by the “slow killer” of loneliness. Isolation increases risk of heart disease, stroke, and Alzheimer’s. It is as deadly as obesity or smoking 15 cigarettes a day.

Financial insecurity will exacerbate these health risks for the elderly. Economic shutdown has weakened global pension funds and they may not recover. Millions of Baby Boomers have been forced into early retirement without adequate savings. Many Americans are dipping into their retirement funds early. The Congressional Budget Office projects that $2.8 trillion in Social Security funds will be used up in a decade due to the impact of un- and underemployment on lowering contributions.

“Income is the main determinant of covid mortality.”

Outcomes of lockdown are equally grim for children. Even if K-12 schools reopen in January 2021, the average student will have lost 7 months of instruction. Because literacy and education levels are a main predictor of longevity, these learning losses represent years of life stolen from students. Moreover, cases of severe abuse and mental-health related ER visits are surging for children. They will also experience weakened immune systems due to lack of exposure to seasonal viruses and natural pathogens.

For people with chronic health conditions or those in need of urgent medical treatment, the short- and long-term consequences of lockdown are disastrous. In the United States, cancer screenings fell by 86-94% in the spring. Many hospitals had to close due to lack of revenue from routine surgeries and procedures. Hospitals are expected to lose a total of $323 billion this year. 1.4 million hospital staff were laid off in April while private health insurance companies doubled their earnings.

In the absence of meaningful investments in healthcare infrastructure, the covid mitigation strategies being pushed by federal, state, and local governments are neither credible nor effective. Elected officials routinely amplify raw case numbers in order to stoke fear and blame individuals for viral spread. As a result, we are currently “saving lives” by killing people. This is not an unforced error or a good policy idea implemented poorly. It is an economic agenda disguised as a health protocol.

California Governor Gavin Newsom sends his children to in-person private school while mandating virtual education for California public schools. He announced a second statewide lockdown just a few weeks after attending an indoor, unmasked dinner with lobbyists at a Michelin three star restaurant where meals can cost up to $850 per person. Newsom is just one of many politicians, elites, and bureaucrats who break the rules. A static social order is being solidified. In our new caste system the wealthy have political and social privileges because they are considered clean and disease-free, while the more low-income someone is, the more they are treated as contaminated.

The goal of lockdown enthusiasts in the “work from home” caste is to shift risk away from themselves and onto essential workers and the poor. Only 40% of the workforce can afford to stay home. 43% of US adults do not have adequate health insurance, and only 31% of low-paid workers have paid sick leave compared to 92% of high-paid workers. “Stay home” is the self-congratulatory mantra of professionals who believe that their virtuous behavior prevents them from contracting covid. In fact, income is the main determinant of covid mortality.

Lockdown fanatics have helped manufacture consent for a brutal reorganization of labor that will plunge millions of people into serfdom. The work-from-home lifestyle is only possible through the labor of logistics workers who transport, sort, and deliver goods. Currently about 10 million jobs that existed in February have not been replaced. Many workers have been forced to take on part-time, no-contract work, a labor model that is rolling back decades of hard-fought protections.

Under the Obama/Biden administration, 94% of new jobs created were gig work, and in 2017 34% of the workforce was employed through the gig economy. Shutdowns are accelerating this trend, with food delivery apps growing their profits as workers struggle to get by. Subscription platforms like OnlyFans saw a surge in accounts at the beginning of lockdown. In March the company saw a 75% increase in users and 60,000 new creators. Lockdown has made OnlyFans a billion dollar business, but the majority of creators make less than $145 a month.

Internationally, workplace closures and supply chain disruptions will result in the loss of 305 million jobs. 1.6 billion informal economy workers are at risk of losing their livelihoods. This devastation will be compounded by famine and the increased spread of untreated diseases like tuberculosis. In July closed food markets were linked to 10,000 child deaths a month. Food is being discarded and crops are rotting in the fields while the number of people facing acute hunger this year has doubled to 265 million.

At the start of the covid crisis, vocal segments of the American left argued that economic shutdown was a way to resist billionaires and capitalism. This demonstrated a deep misunderstanding of the way financiers can profit from economic contraction. Many on the left chose to ignore the Biblical scale of the destruction that economic stoppages would cause, arguing that the covid crisis was an opportunity. Today the left continues to advance the illusion that meaningful relief is possible, while workers’ pensions are plundered, children’s futures disappear, and 150 million people are pushed into extreme poverty worldwide. Lockdowns were not bungled by incompetent leaders. They were in fact executed perfectly, because their purpose was not public health but rather the rapid installment of a regressive neoliberal agenda designed by the nonprofit industrial complex.

We are facing something much darker than a respiratory virus. A great theft is occurring under the pretext of safety. It is not just the theft of working people’s jobs, savings, and property—it is also the theft of a meaningful life. In Japan, October suicides alone exceeded the country’s 2020 covid deaths. Lockdown was mentioned by 80% of callers to a suicide hotline in the UK. In the US over half of young adults are showing signs of depression, with 1 in 4 of them expressing suicidal ideation. Overdoses have increased 20% compared to 2019.

The beneficiaries of this neo-feudal dystopia are the ownership class, tech CEOs, investors, NGOs, and private foundations. Their ongoing immiseration of workers is intentional. 80% of covid loans offered by the IMF to developing countries were contingent on governments implementing austerity programs such as cuts to healthcare and elimination of public sector jobs. In the US, seventeen of the top 25 corporations will make $85 billion more this year than in previous years, and shareholders will reap the rewards. Over the same period, American workers have lost $1.3 trillion.

Remnants of the covid class war will touch every domain of life for decades. Officials have suggested that social distancing will need to continue even after mandatory vaccinations. Masks have become a potent symbol of both physical purity and mutual mistrust. Our fantasy of a sanitized and deathless society has created a world where the home is a prison and friends and family are a health hazard. In this world children are told they are killing their grandparents simply by existing. Right now we are still at the beginning of sweeping changes that may include social credit, immunity passports, a rent-only economy, AI and robotics expansion, financialization of natural resources, increased mass surveillance, the Uberization of everything, and rolling lockdowns for climate change or the flu. We have a limited window of time to reclaim the things that make life worth living: family, community, cultural heritage, the social sphere, public institutions, common spaces, and free movement. That window may be closing quickly, but it is not fully closed yet.

Protesters hold placards as they march as part of a demonstration against the vaccination certificate and the requirement to wear masks amid the Covid pandemic on Seapoint Promenade in Cape Town, on October 2, 2021. – More than 1.000 people took part in the protest. South African President Cyril Ramaphosa announced a few days before a new standardised Covid vaccination certificate, which could ease travel and help access events that require proof of innoculation.